Journey to the Center of the Earth (Remastered)

“One of the very best Hollywood adventure movies, with lots of monsters, underground oceans, sinister villains, and touches which would have delighted Jules Verne himself.”
—Time Out Film Guide

Jules Verne’s classic adventure tale about a band of intrepid explorers descending to the hidden reaches of our world is brought to the screen in phantasmagoric CinemaScope® with Journey to the Center of the Earth (1959). Braving exploding volcanoes, tumbling rockslides, and flesh-eating reptiles, James Mason stars as a courageous if irascible geologist, Pat Boone as his indomitable young assistant, and Arlene Dahl as a lovely widow who becomes an invaluable colleague on their voyage of discovery. Highlighting the perilous exploits is Bernard Herrmann’s titanic score (available here as an isolated track), a landmark masterpiece of fantasy film music. All these delights and more are available on this Twilight Time release by way of a brand-new 4K restoration.

"The greatest mystery is right here, right under our feet!"

Hollywood has long had a love affair with 19th century adventure novels. The works of Jules Verne, H.G. Wells, H. Rider Haggard, and Arthur Conan Doyle have proved to be inspiration for numerous cinematic and television adaptations. My personal favorite has long been Henry Levin's 1959 adaptation of 'Journey to the Center of the Earth.' Everything from the great cast headlined by James Mason to the rich art direction to the beautiful Bernard Herrmann score lit up my young eyes and ears the first time I saw it. Years later it still holds my fullest attention.

Newly knighted world-renowned Scottish geologist Oliver Lindenbrook, James Mason, is given a simple gift that will change his life and the known course of geological science. The young Alec McKuen, Pat Boone, spotted a curiously heavy piece of lava rock and found it to be a suitable gift for his favorite professor. Lindenbrook is instantly taken to the object dubbing it a "scholar's choice." But the intrepid professor's curiosity is insatiable and is determined to learn why this traditionally light rock is so heavy. By an accident of science, Lindenbrook discovers the rock's hidden secrete, a plumb bob baring the signature of the explorer Arnie Saccnuson who disappeared into the depths of the earth hundreds of years before.

Determined to follow in Saccnuson's footsteps, Lindenbrook plots his own expedition to become the first man in recorded history to reach the center of the earth and return to the surface. Along for the great undertaking is the young McKuen, the widow of a rival scientist Carla Goetabaug played by Arlene Dahl, and the handy Icelandic Hans Belker played by former Olympic Athlete Peter Ronson. As the trio descend deeper and deeper into the unknown, danger meets them at every turn in the form of falling rocks, underground floods, gigantic prehistoric monsters, and even an ancestor of the great Arnie Saccnuson.

'Journey to the Center of the Earth' is a very determined and plodding film. Step by step we watch our scientists march into the unknown and face any number of dangers that are brought to life in this fantastic production. This film earned three academy award nominations for Best Art Direction, Best Sound, and Best Special Effects - and it's easy to see why. 'Journey to the Center of the Earth' was an immense undertaking for its time and required every known trick in the book to pull it off including practical sets, miniatures, matte paintings, animation, superimposed elements, and forced perspective shots. The results are marvelous. 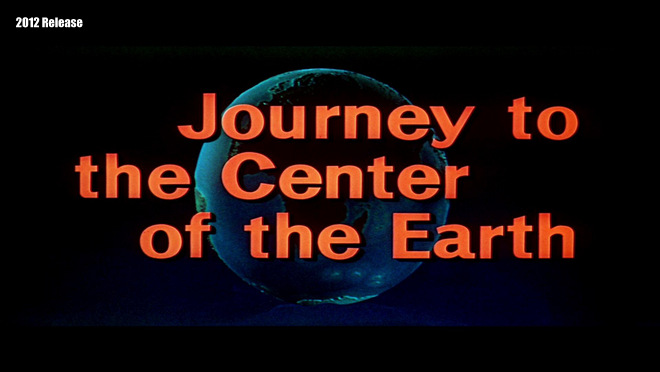 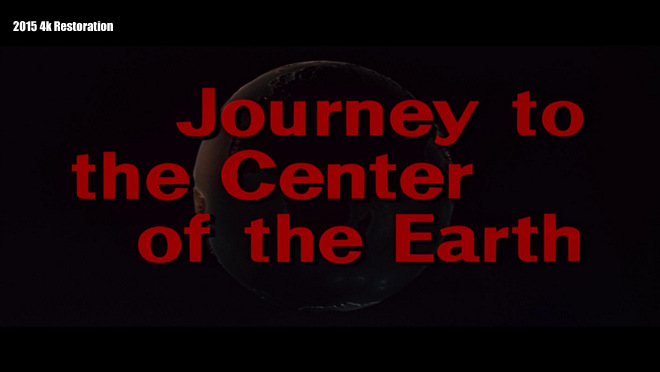 Things hit the right note with this great cast. James Mason's stern manner makes for the perfect taciturn Lindenbrook. Pat Boone, while hindered with a faux Scottish accent does a decent enough job playing the dependable McKuen. Arlene Dahl's Carla Goetabaug is a fairly strong feminist role in a movie dominated by men. Peter Ronson's Hans is fun as he's clearly a powerful man but maintains a soft side as he cares more for his pet duck than anything. Then you have the late great Thayer David, who is absolutely creepy and sinister as this film's villain.

As far as literary adaptations go, it's probably not the best. A number of characters have been renamed to be more acceptable to American audiences and some events differ wildly from the book, but that's okay. This is a fun film all around. It's perfect entertainment for people of all ages and one that should be appreciated by anyone ready and willing to give it spin. It may be slower paced and more deliberate than the recent Dwayne Johnson starring film but that doesn't keep it from being any less captivating.

'Journey to the Center of the Earth' has long been a favorite film in my household. I remember my father ordering this movie on VHS from Columbia House decades ago and how excited he was to show it to me. To this day we're like little kids in front of the TV whenever we decide to put this movie on. While I can't guarantee you and yours will have this same reaction, it is my hope that it becomes a favorite and one that is revisited over and over again.

'Journey to the Center of the Earth' makes its second debut on Blu-ray again courtesy of Twilight Time. Pressed on a BD50 disc, this limited edition of 5000 is housed in a standard blue Blu-ray case, and not in a clear white Blu-ray case as the recent reissue of 'Fright Night' was. The disc opens to a new main menu image than the previous release and offers additional navigation options to accommodate the new special features. 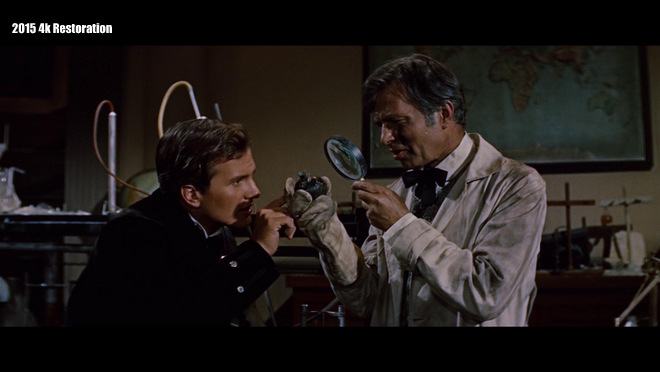 Before I start my review of this new 4K picture scan, a little history is in order. 'Journey to the Center of the Earth' has had a storied home video past. Around 1990 when this film was to make its grand Laserdisc debut, it was discovered that the elements had deteriorated to a state where they could no longer be usable. Future home video presentations were then struck from intermediary print elements as indicated on my old DVD box art. Essentially, fans were stuck with a rather muddy presentation that only moderately improved from video format to format. Even with the 2012 release, while an improvement and quite handsome in places, 'Journey to the Center of the Earth' still looked very rough around the edges and was a bit disappointing in many ways.

This new 4k scan of 'Journey to the Center of the Earth' in my eyes simply looks stunning. While I'm fairly certain this scan is of the same troublesome intermediary elements, the improvement in picture quality is noticeable from the very first shot of the 20th Century Fox logo. While slightly darker seeming, color is vastly improved and doesn't feel like the image has been artificially brightened. In the previous 2012 release the opening title letters appeared as a pale pinkish color, here in this new 4k scan, they are a true and proper crimson red, although the model earth in the background appears much darker and ominous. All around from McKuen's green jacket to Carla Goetabaug's lavender dress - colors are for the most part vivid and beautiful. Flesh tones are also markedly improved offering healthy skin color rather than the previous sickly pale. Grain structure is strong and intact offering outstanding detail improvements, from the opening shots in Edinburgh to Professor Lindenbrook's home library to clothing patterns to the incredibly textured practical sets. Black levels and shadows also appear enhanced and greatly improved offering a better sense of depth all around while mitigating some instances of crush.

Now, as this scan appears to be of the same elements as the previous 2012 release, the same instances of print damage pop up here and there in the form of slight nicks and scratches. Scenes that looked soft or out of focus in 2012 maintain that appearance in this release as well. These scenes are most notable during optical transitions and processed forced perspective shots. That said, I've watched this movie for nearly 25 years on home video owning it on VHS, Laserdisc, DVD and now twice on Blu-ray - with each release offering a marked improvement in video quality. This Blu-ray transfer in my opinion is absolutely hands down the best it has ever looked on home video. 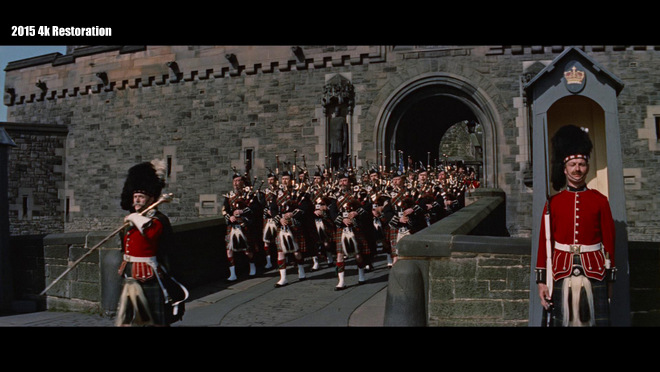 The audio for 'Journey to the Center of the Earth' has also experienced a rather splendid upgrade. The previous 2012 release offered only an English DTS-HD MA 4.0 track. This new Blu-ray offers an English DTS-HD MA 5.1 track as well as a DTS-HD MA 2.0 track. Right out of the gate I will tell you to keep to the 5.1 track. It just sounds better and offers a richer auditory experience all around. While the surround channels don't get much to do except during more action laden scenes, the really exciting enhancements can be heard on the low ends, primarily from Bernard Herrmann's score. Instantly as the main title track rises, I could hear my subwoofer getting a little extra workout and helping to create a resonant tone of dread. It was actually quite unsettling really because in all my years watching this movie I had never experienced those lower register dissonant music notes to that degree and it honestly gave me goose bumps. Even with the low ends working harder - levels are just fine and this track is free from any anomalies the likes of hisses, pops, or audio breaks. With that, dialogue, sound effects, and music are appropriately layered and offer a rich sense of atmosphere while maintaining clarity. A gorgeous track to say the least for a film of this vintage. 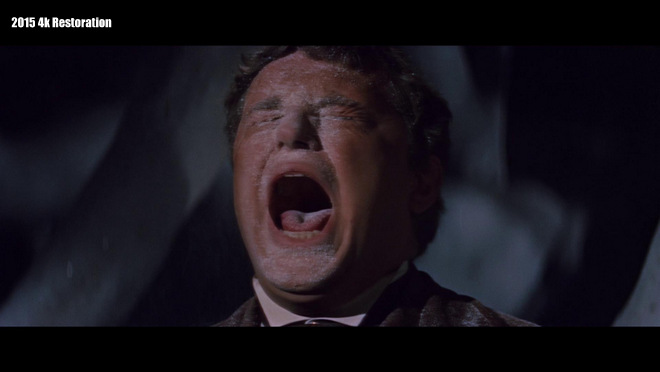 Essay By Julie Kirgo: Appearing in the liner notes, this is the same essay as the previous release and does not offer any additional details about the new 4k restoration effort.

Audio Commentary: Actress Diane Baker and film historians Steven C. Smith and Nick Redman work well to keep the track lively and interesting. While not entirely scene specific, this is a nice track all around and Diane Baker offers a number of anecdotes while not always relevant to the moment, are actually interesting and fun.

Isolated Score Track: Per Twilight Time's modus operandi, a running track featuring Bernard Herrmann's score is offered again. From what I could tell this is identical to the previous release and still sounds as beautiful as ever.

Original Theatrical Trailer: (HD 3:21) It's a fun little piece of promotional material featuring James Mason providing a voice over introduction speaking to the audience about the scale of the film. 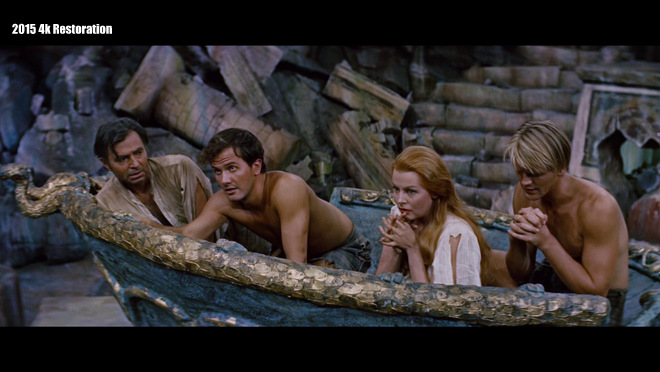 For the second go around on Blu-ray within three years, you're probably asking yourself if this is worth the purchase, let alone a double dip? My simple answer is yes. If you missed the 2012 release, then this a no brainer. I've loved this movie since I was a child and I was taken aback by the improvements in picture quality over the previous release. I honestly did not expect to experience the improved detail levels and rich colors. With a new audio commentary track in addition to the previous disc's extras as well as the strong DTS-HD MA 5.1 audio, I've got to call this one highly recommended.