Westerns and Revenge go together like peanut butter and jelly. There's something about the stripped down simplicity of the Western genre that lends an extra rugged and dangerous aura to a character with nothing left to live for seeking to bring their own brand of justice to some no-good outlaw. It's been done a million times in countless books, comics, and films, and yet I can't get enough of it. So when I popped in Michael Winner's 1972 'Chato's Land,' I was very happily tossed into a lean and mean revenge film starring the legendary Charles Bronson and the always fantastic Jack Palance.

Pardon Chato (Charles Bronson) is a quiet, peaceful man who never wanted to harm anyone or be bothered by anyone. All he wanted was a shot of whiskey after trading his wears and buying supplies, but a bully redneck Sheriff Saunders had other ideas. Chato is someone who isn't wanted in town, not because he's a bad guy, but because he's a "breed" - half white, half Apache. To the white people in town, Chato is less than human. When the fat and slow Sheriff Saunders draws down on him, Chato has no choice but to kill the tin star where he stands. Now on the run, the townspeople turn to famed rebel cavalryman Captain Quincey Whitmore (Jack Palance) to hunt Chato down.

Quincy pulls together a posse of white men who aren't opposed to hanging a man for being part Apache, rather than committing what could be called a self-defense killing. With Quincy's Posse on the warpath, Chato does everything he can to outwit the posse, sending them in circles, running off their horses, and even wounding one or two - but he doesn't kill them. Just when he thinks he's safe and can go back to rounding up wild stallions, the posse finds Chato's home and several of the men rape his wife. Once he frees his wife and spirits her and his small son away, Chato sets about systematically killing each man in the posse to the point that they turn on each other. 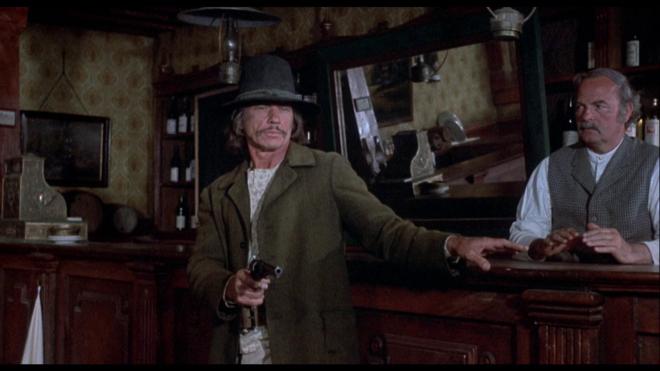 When 'Chato's Land' was released in 1972, it was met with some pretty tough criticism for its violent content and languid pace. These are certainly valid criticisms as the film is a bit on the long side and very violent, but compared to the hyper-kinetic filmmaking of our modern era, the pacing and honest brutality in the violence is actually a bit of fresh air. 'Chato's Land' launches you into the story with Chato having to immediately go on the run, but then it wisely taps the breaks and lets our film's villains create their posse. At this point, Chato is almost like a phantom, only popping up here and there for a second or two; long enough to see the outcome of a trap he recently laid and Bronson plays him with an honest curiosity of the men who hunt him. All of that changes when he sets out to exact his own brand of vengeance after his wife is attacked.

Charles Bronson always played the tough guy role very well, it's what maintained his career through the 80s and 90s when he had a tough time getting hired. Through all of the 'Death Wish' movies and flicks like '10 to Midnight,' Bronson has offered up his traditional stoic tough guy brand of revenge. As Chato, he's in incredible physical shape and you get a true sense of danger the posse is in - not that they don't deserve what they've got coming their way! On the opposite side of the coin we have Jack Palance as the former confederate Quincey. Quincey is a man who proudly climbs back into his Captain's uniform for one last ride. All he wants is a victory, a battle that he can win, but just like the war that made him a veteran on the losing side, he's completely misjudged his opponent. By the time Chato starts his revenge plan, you can see Quincy recognize he's reached a point of no return and is wracked with regret and Palance pulls it off perfectly.

'Chato's Land' is one of the six collaborations between Charles Bronson and director Michael Winner. The pair always worked well together - that is until 1985's 'Death Wish 3.' While 'Chato's Land' itself could well be tossed aside as a piece of exploitation filmmaking, but that would be doing this film a disservice. It's lead actor may not talk much, but he doesn't have to give his character plenty of depth as the film explores the ideas of justice, revenge, and honor. I was thoroughly entertained by this one. I'd long heard of this film, seen its box on rental store shelves, but before now I never sat down to give it the time it deserved. It's a solid film and Bronson fans should be very happy to see this one arrive on Blu-ray.

'Chato's Land' arrives on Blu-ray thanks to Twilight Time and is limited to a run of 3000 copies. The film is pressed onto a Region Free BD50 disc and comes housed in a standard clear Blu-ray case. The disc opens directly to a static image main menu. The disc comes with a booklet featuring still photos and an essay by Julie Kirgo.

With a 1.85:1 1080p transfer, 'Chato's Land' is given a well detailed, colorful HD upgrade. Fine film grain is apparent throughout, but stable so as not to be intrusive to the film and is only ever noticeable during night scenes. Facial features, costuming, and the expansive locations throughout Spain where the film was shot all feature notable detail increases. Black levels are pretty strong, not quite deep inky black, but there is still enough shadow separation to give the image a sense of depth. Colors appear stable favoring earth tones while primaries do get to enjoy plenty of pop and presence. Sometimes flesh tones can appear a bit on the pink side - but that also could be sunburn as most of the time actors appear appropriately tanned and healthy. The print for this release is in pretty good shape aside from some slight speckling. The opening credits can look a bit spotty, but once they're passed and the optical effects have moved on, the image evens out and genuinely looks pretty good for a back catalogue release.

This release of 'Chato's Land' comes with a pretty decent English DTS-HD MA 1.0 mono mix. Dialogue is clean and easy to hear throughout. Sound effects tend to sound a bit canned in places but are otherwise audible and effective and Jerry Fielding's score comes through with beautiful clarity. The issue at play here is there really isn't much in the way of imaging or any sense of space and dimension to the track. It isn't entirely flat and lifeless but it's missing the subtle sounds like wind or the distant crunch of a hoof clopping on gravel that would give the track much shape. It's still very good but it didn't really blow my hair back. Better than average.

Interview With Screenwriter Gerald Wilson: (HD 17:48) A pretty great interview with the writer of the film, he's got a lot to say in the little time he's given and offers up a lot of interesting tidbits about the production and the film's reception.

'Chato's Land' may not be the greatest Bronson film ever or the best Western for that matter, but it's a solid piece of entertainment. Genre fans should be happy -  especially if they're Charles Bronson fans. Twilight Time brings the film to Blu-ray in fine order, featuring a very good image transfer and a solid audio track. Extras are a bit slim but informative, and the isolated score track is a welcome addition to the disc. 'Chato's Land' is a recommended Blu-ray release.