Overview - Academy Award® winners Denzel Washington and Meryl Streep, along with Golden Globe and Emmy nominee Liev Schreiber, mesmerize a whole new generation of audiences in Academy Award® winner Jonathan Demme’s "The Manchurian Candidate." As the entire nation watches the presidential campaign hurtle towards Election Day, one soldier races to uncover the conspiracy behind it - a conspiracy that seeks to destroy democracy itself.
OVERALL
Recommended

Why are political thrillers so rare these days, and so tricky to get right? Is it because our world-weary, apathetic post-9/11 culture just doesn't believe in idealism anymore? Looking back at the genre's heyday in the '70s, the best political thrillers may have been cynical and angry, but at their core they were humanistic tales made by passionate filmmakers who were reacting to a Watergate-rea government mired in lies, corruption and deception. Audiences responded with just as much fervor, turning socially-conscious thrillers like 'Marathon Man,' 'All the President's Men,' 'Chinatown' and 'The Manchurian Candidate' into blockbusters. So it came as a surprise to many in 2004 when Oscar-winning filmmaker Jonathan Demme ('The Silence of the Lambs,' 'Philadelphia') tried his hand at a remake of 'The Manchurian Candidate.' Not just because John Frankenheimer's original is widely regarded as a cinematic masterpiece, but because even if Demme could somehow successfully update the film for the modern age, would mainstream moviegoers still be interested in political paranoia and intrigue?

Drawing equally from Richard Condon's original 1959 novel and George Axelrod's 1962 screenplay adaptation, Demme's take on 'The Manchurian Candidate' remains faithful to the basic structure of both while adding a post-millennium perspective that will keep even disciples of the Frankenheimer film unsure of what comes next. Major Ben Marco (Denzel Washington) is a former commander of a Gulf War platoon that survived a bloody ambush in Kuwait thanks to the bravery of one Sgt. Raymond Shaw (Liev Schreiber). Son of Senator Ellie Shaw (Meryl Streep), this Purple Heart recipient is being groomed for a political breakthrough just as an unanticipated vacancy opens up for the vice presidency. But Marco soon senses something is not right -- suffering vivid, horrifying hallucinations, he begins to piece together a Kaftka-esque web of corruption that ultimately leads to the highest quarters of the government.

Both the original and the remake of 'The Manchurian Candidate' are tough to discuss without spoiling their many plot twists, so I won't even try. However, to the film's great credit, I will say that while some of the modernizations that Demme and his co-screenwriters Daniel Pyne and Dean Georgaris attempt don't completely succeed, Demme expertly recreates the intense sense of dread and paranoia that infused both the original novel and the original film. Perhaps the most significant reinvention is that the very meaning of the word "Manchurian" has been altered from being a Communist threat to a corporate one. Pyne and Georgaris apparently felt that with the Cold War long since won, the concerns and worries of today's Americans are now more about privatization of the marketplace, capitalism run amok and government corruption. Thematically, I think Demme got that right -- his 'Manchurian' oozes from its very celluloid pores an overwhelming atmosphere of inescapable dread. It is so effective because it is so relevant to today's political landscape. Though we may not always know what is going on in the narrative, or why, we never lose faith that Demme's abilities as a storyteller are leading us in the right direction.

Surprisingly, the performances are in many ways superior to those in the original film. Washington is an unexpected and inspired choice for Marco. As he has proven with his strong, commanding work in such films as 'Glory,' 'The Hurricane' and his Oscar-winning turn in 'Training Day,' Washington definitely knows how to play the unflappable hero. But for Marco he draws from a different, far more vulnerable part of himself. He creates a character that is unstable, conflicted, even meek -- this is not the Denzel Washington we have seen before, which keeps us off-balance as we doubt Marco just as much as he doubts himself. Schreiber too, also delivers a command of his craft only hinted at in his previous performances. He is a near-master at saying little but speaking volumes with just a single haunted glare, laying bare his character's foibles and insecurities. Streep may have had the hardest role to pull off, but rather than trying to compete with Angela Lansbury's revelatory portrayal in the original film, Streep wisely doesn't even try. She is also helped a great deal by the script, which is able to delve deeper into the more disturbing aspects of her character, particularly the incestuous undertones in her relationship with Raymond. There are moments later in the film that truly have the power to shock. 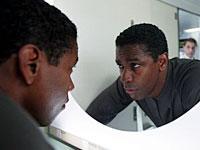 Unlike fellow format-agnostic studio Warner, Paramount has not been simply replicating its HD DVD releases for Blu-ray. Though this version of 'The Manchurian Candidate' has been minted from the same master used for the HD DVD release last summer, Paramount continues to use different compression codecs for each format. The HD DVD got VC-1, while the Blu-ray gets MPEG-2. Both are, of course, presented in 1.85:1 widescreen and full 1080p video. And if you're wondering why Paramount waited so long to finally issue 'Manchurian' on Blu-ray, apparently it was to give the full BD-50 dual-layer treatment. With a higher bitrate than the HD DVD version, and the same master, I must say I'm impressed with how well the codecs match up. Despite some reservations I have about the quality of the source material itself, I could not detect any significant difference between the Blu-ray and HD DVD transfers.

This is certainly a nice translation of 'Candidate's film-like look to the home screen. The source print is in otherwise fine shape, with intended graininess throughout that, while natural, will likely distract some. The image can look a bit tweaked and inconsistent at times as well. Some shots appear intentionally desaturated, while others boast hues that are terrific, such as the vivid reds of Raymond Shaw's campaign headquarters. Contrast also looks a bit blander than most recent transfers I've seen, though a few shots (most notably Denzel Washington's dream-like flashbacks, and almost all brightly-lit exteriors) have some nice pop. Also -- and I don't know if this is intentional -- but mid-range and shadow detail are slightly less impressive than the best high-def I've seen because some segments appear to have been shot with filters to give them a softer look. Still, both the Blu-ray and HD DVD share considerably improved depth compared to the standard DVD release. Overall, I was quite pleased with 'The Manchurian Candidate,' sometimes even blown away, though it never quite reaches the upper echelon of high-def presentations I've seen.

Paramount offers both Dolby Digital and DTS 5.1 surround tracks on 'The Manchurian Candidate,' with the former's 1.5mpbs bitrate matching the Dolby Digital-Plus track on the HD DVD version. Regardless of audio format, however, the film's sound design is just not as engaging as I would like. 'The Manchurian Candidate' is so much about creating a sustained mood of paranoia and dread that it is really surprising that its sound design isn't more immersive and enveloping.

Technically, there is certainly nothing wrong here. Dynamic range is quite forceful, especially with Jonathan Demme's always-aggressive use of classic rock songs on the soundtrack. Frequency range is supple and realistic across the entire spectrum. Unfortunately, dialogue and some sound effects come off oddly flat for a major Hollywood production. Surround use is also largely uninspired. The mix is front heavy, with only sporadic if effective deployment Rachel Portman's eerie and abrasive score and other minor discrete sounds to the rears. There is little in the way of aggressive movement around the soundfield, which seems a real missed opportunity. Again, nothing terribly wrong here, but nothing particularly memorable, either. 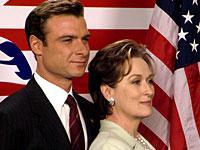 This Blu-ray release contains the same extras as the standard DVD and HD DVD releases of 'The Manchurian Candidate' from Paramount, that's a good thing. It stands up as a healthy package of supplements that offers not only a comprehensive view of the making of the movie, but a varied and lively discussion of the film's politics.

Kicking things off is an audio commentary with director Jonathan Demme and co-screenwriter Daniel Pyne. This is certainly the centerpiece of the extras. Both Demme and Pyne are very easygoing, insightful and engaging, discussing their overall approach to remaking such a classic film, as well as sharing scene-specific making-of stories. Listening to this track, I was reminded why audio commentaries have become so ubiquitous a feature on DVDs (and are likely to remain that way on the new high-def formats). It's because when they are as solid as this one, they are still the best and most direct way to get inside the mind of filmmakers and understand why they make the decisions they do. A great track even for more casual fans of the film.

Next up are two featurettes, though they are not as detailed as they could have been. The 14-minute 'The Enemy Within' is your basic making-of, full of on-set footage and interviews with all of the main cast and crew, as well as executive Tina Sinatra (Frank's daughter). But why is it so short? Had this been at least a half an hour, it could have cut deeper than just surface level -- as is, the audio commentary is much more illuminating. The 12-minute "The Cast of 'Manchurian Candidate'" adds a bit of much-needed perspective on the film's characters, though most of the EPK interview snippets with the likes of Demme, Pyne, Denzel Washington, Liev Schreiber and Meryl Streep are too fast-paced for anyone to be able to get at anything really meaty. I've certainly seen worse featurettes than these, but I've also seen better.

More goodies include a collection of excised material. There are five Deleted Scenes a two-minute Outtake reel, and Liev Schreiber's Screen Test, all with optional commentary by Demme and Pyne. For once, the deleted scenes are actually quite good, though it is fairly obvious why Demme cut them, mainly for time. It is worth giving these a watch as they're rather interesting.

Finally, by far the most unique extra is "Political Pundits," a 14-minute assemblage of roundtable interviews with six well-known industry luminaries discussing the current state of politics, including director Sidney Lumet, rapper Fab 5 Freddy, actress Anna Deveane Smith and writer Roy Blount Jr. Demme and Pyne provide even more optional commentary on this one, and it is an interesting idea -- Demme pooled the participants together to get their perspective on America's attitudes towards its government. I'm not sure how much this informed the finished product, if at all, but Demme is nothing if not well prepared.

Rounding out the extras is the film's theatrical trailer presented in 1.85:1 widescreen and full 1080p video.

Though it could never be as prescient and timely as the original, Jonathan Demme's 2004 remake of 'The Manchurian Candidate' is an engrossing and intelligent thriller. Paramount produced a very solid HD DVD release of the film last summer, which this Blu-ray version easily matches. It has a couple problems here and there, but I liked both the transfer and soundtrack, and the extras ain't nothing to sneeze at, either. This may not be the disc you whip out as demo material to impress your friends, but it is another very respectable addition to Paramount's growing library of Blu-ray titles.

Sale Price 27.96
Buy Now
3rd Party 17
In Stock.
See what people are saying about this story or others
See Comments in Forum
Previous Next
Pre-Orders
Tomorrow's latest releases