What happens when man violates the laws of God and science? For Captain Walton (Emmy and Golden Globe winner Donald Sutherland, The Hunger Games) and the crew of a weather-beaten ship stranded in the icy sea, the answer follows their rescue of a scientist close to death, frozen in fear, and insane with dire warnings. Viktor Frankenstein (Alec Newman, Frank Herbert's Dune) has a story to tell—a story as chillingly real as the tortured howls emanating from the Arctic fog and as timeless as the need to be loved.

As far as adaptations of Mary Shelley's seminal horror classic go, the 'Frankenstein' miniseries is by far the closest adaptation of the 1818 novel. Although the producers made a few minor alterations, all of which only true Shelley diehards will even care to take note of, this 177-minute retelling of one of the most enduring and influential tales of all time is about as close as we'll ever come to an accurate film version. Sadly, it also becomes pretty apparent why no other filmmaker has attempted such a feat, including Kenneth Branagh's 1994 generally amusing take. (Keeping in mind, there exists another 204-minute behemoth of this television film wandering the Earth.) The original novel is densely rich with details and minor characters which ultimately don't translate well to the screen, simply because they take more time than necessary to flesh out. Other minor events and interactions detract somewhat from the central theme of science run amok and Man's Godlike arrogance over nature when presented on film.

One such character is William Hurt's Professor Waldman, the university instructor who took an immediate affinity towards a young, endlessly inquisitive Victor Frankenstein (Alec Newman). Even though Hurt is terrific in the role, an enthusiastically willing father figure jumping at the opportunity to encourage Victor's imagination and feed his ravenously hungry curiosity, there is little sense his presence does much else except offer a platform on which the actor can flex his acting chops, such as his heartfelt and remorseful speech on feeling morally responsible for emboldening Victor's dangerous pursuits. The same goes for Donald Sutherland as Captain Walton, whose portrayal would have been just as effective as a bookend character, which Branagh smartly did in his significantly shorter adaptation. His presence interrupts Victor's ambiguously apologetic and repentant confession as if deceptively designed to give the talented actor a final introspective and weighty conversation with Victor's creation rather than the eventual outcome of events preceding it. Basically, the production wanted to advantage of the two biggest and best known names of the production, to give them enough screen time to justify the making of the miniseries. 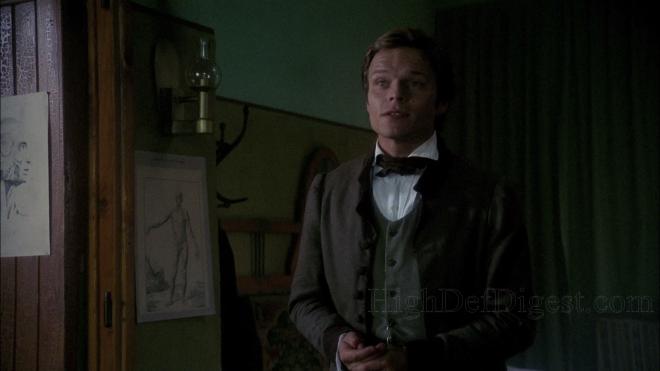 Granted, the two respected actors deliver solid performances that can be appreciated on their own, but they don't really add much to the flow of the plot, only succeeding at inflating a production that is already quite lovely and sophisticated to begin with. In fact, much of this televised event, which originally aired on the Hallmark Channel cable network in 2004, can be appreciated on its stage design, elegantly recreating the early 18th century world where Luke Goss as The Creature experiences animosity, intolerance and repugnance from even his own creator for his difference. With superb cinematography and polished camerawork by Alan Caso ('Heroes Reborn,' 'The Americans'), the film beautifully conveys a Gothic atmosphere that is at once believable and familiar, convincingly transporting Shelley fans to a time when ignorance ruled societal judgment of the unknown, a period when superstition was at the brink of being conquered by scientific discovery. And Goss supplies the lonely, misunderstood monster with the sort of sympathetic humanity which has made him a beloved, appealing fictional character, a performance by Goss we see again and love in his portrayals of the villains in 'Blade II' and 'Hellboy II: The Golden Army.'

'Frankenstein' may have its drawbacks, but it can be enjoyed and appreciated for its technical merits. Director Kevin Connor does admirably behind the camera, keeping viewers invested in the development of the characters as the story unfolds and advances from the misguided actions of a prideful Victor. For many, Connor is likely better known his work on 'The Land that Time Forgot,' but for horror fans everywhere, the British-born filmmaker is best remembered for 'From Beyond the Grave,' 'Motel Hell' and 'The House Where Evil Dwells' where he displayed much of the same talent in making interesting characters, despite a weak story, as in the case of the latter movie. He affords time and freedom to Newman slowly descending into the psychologically-broken mad scientist who only discovers his moral compass after the fact while transforming The Creature popularly understood as a feared monster into a sympathetic and likely character prone to win our compassion. The miniseries is true to its source and themes of moral ambiguity, but it can also overstay its welcome, serving as a good example that faithful adaptations of classic novels don't always translate well to the language of cinema.

Mill Creek Entertainment brings 'Frankenstein (2004)' to Blu-ray on a Region Free, BD50 disc housed inside a regular blue case. At startup, the disc goes straight to a static menu where viewers can choose between the first or second half of the miniseries.

The Hallmark miniseries is raised from the dead with a relatively unexceptional but tolerable 1080p/AVC MPEG-4 encode that'll leave fans ruminating on the beauty beyond the monster. It's not a terribly ugly or hideous-looking creature since it has potential of being quite attractive were it given some tender loving care. But, on the whole, the presentation is pretty hit or miss with a majority of the runtime displaying average contrast, making several sequences noticeably dull and flat. At its best, the picture is bright and dynamic, especially during daylight exteriors where richly-saturated primaries shine with energy and zest. On the other hand, there are a fair number of poorly-resolved sequences where the palette is middling and flesh tones appear flushed and sickly pale. Definition and clarity also take a nosedive during these moments, making much of this high-def transfer barely better than its DVD counterpart, but again, there are some rather strong examples of excellent detailing. Through it all, black levels are accurate and true, but altogether, the 1.78:1 image won't really have fans running out to buy a copy.

Much like the video, the audio has both its plus and minuses, starting with the fact that the monster has been equipped with a legacy Dolby Digital stereo soundtrack. On the whole, it's not a terrible presentation with much of the action restricted to the center of the screen, which is not an entirely bad thing since this is a character-driven film. With that in mind, dialogue and character interactions are clean and precise while background activity comes through with good detailing and some appreciable presence. Imaging is well defined for the most part with considerable distinction and clarity, but then again, neither the action nor the score really push that far into the upper ranges, generating a mostly even and uniform soundstage that also fails to really engage viewers. Low bass is middling and lackluster, near non-existent at times when there are more likely expected. A couple times, atmospheric effects appear to spread into the other two channels, expanding the soundfield every so slightly, but overall, this mix is average and unsatisfying.

As far as adaptations of Mary Shelley's seminal horror classic go, the 'Frankenstein' miniseries, which aired on the Hallmark Channel cable network in October 2004, is by far the closest adaptation of the 1818 novel. Although the producers made a few minor alterations, this 177-minute retelling by director Kevin Connor offers much to appreciate in terms of technical achievements and production value, but it ultimately serves as a good example of what beloved novels don't always translate well to the language of cinema. The Blu-ray from Mill Creek Entertainment arrives with an average but slightly troubled audio and video presentation while also sorely lacking in the supplemental department. The overall package will only be of interest to diehard Shelley fans curious to see how the film interpretation fares against the book.

Sale Price 14.11
Buy Now
3rd Party 8.99
In Stock.
See what people are saying about this story or others
See Comments in Forum
Previous Next
Pre-Orders
Tomorrow's latest releases