Veteran actor Rory Calhoun stars as the delightfully fiendish Farmer Vincent in a goulish tale of the macabre that has now become a cult classic. At the Motel Hello Farmer Vincent mixes up his special blend of smoked meats. But rumours abound of strangers disappearing just after passing by the motel...

What was originally meant as a straightforward horror flick at the height of the "slasher" movie craze, 'Motel Hell' somehow evolved into the blackest of satires during its production, and arguably, it's all the better for it, because if it were taken the least bit serious, a great deal of its appeal would be lost, making it an oddball-out curiosity that attempted to ride the coattails of a filmmaking trend. That's not to suggest that others from the early 80s didn't do that, but rather, this often overlooked low-budget gem from Kevin Connor ('The Land That Time Forgot,' 'The House Where Evil Dwells') stands out from the crowd precisely because it injects a wickedly dark sense of humor along with buckets of gory blood into the formula.

Not intended for the weak of heart — by which I mean those incapable of laughing at the excessive debauchery and grisly mayhem — the movie stars Rory Calhoun as farmer and motel owner Vincent Smith. Even in the sunset years of his career, the still-handsome character actor who appeared in 'River of No Return,' 'The Hired Gun' and was the star of 'The Texan' carries a debonair magnetism that gives the production an air of sophistication. As Smith, Calhoun effectively brings a believable Southern charm and genial likeability that also makes him somewhat creepy. His overtly-friendly demeanor convincingly disguises a disturbed and methodical maniac that intelligently reasons his acts as morally right.

The deliciously likeable Smith's implied and indirect pronouncements are the only serious aspects in a script that took four writers to complete. There are very subtly veiled, if also crudely and clumsily handled hints at the plot possibly reaching for some sort of cultural commentary. Whatever the case, British-born director Connor deliberately keeps this possibility under check with lots of silliness, as if balancing a loony comical tone with shrewd social jabs. Legendary radio disc jockey Wolfman Jack makes several appearances as the eccentric TV evangelist Reverend Billy, his sermons on the wickedness of the world are apparently the only thing on television. Even funnier is Smith continuously proclaiming his smoked meats made organically without antibiotics, preservatives or hormones in a movie about cannibals, human farming and strict family values. 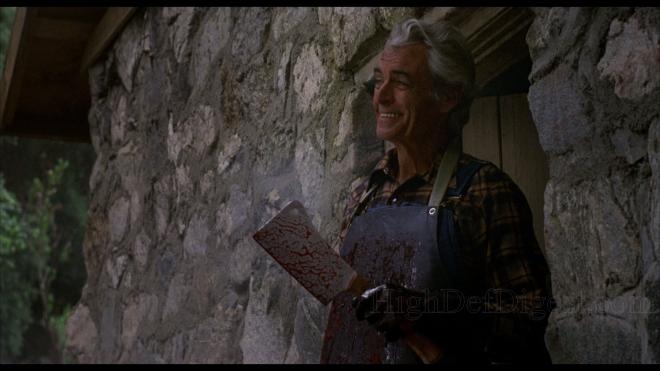 But again, any attempt at seriousness, which includes the movie ever trying to scare audiences, essentially ends there, especially when the wonderfully funny Nancy Parsons appears as Smith's younger sister Ida. Like some sort of hillbilly jester, Parsons, who later would become best known for her role as PE teacher Beulah Balbricker in the 'Porky's' series, plays it subdued and restrained, but the twinkle in her eye and her deceptively friendly smile clues viewers to her sinister, maladjusted side, making her Smith's perfect partner for the family business. Paul Linke of 'CHiPs' TV drama fame joins the hilarity as baby brother Sheriff Bruce, who supposedly, unbeknownst to him, is the biggest cannibal of them all.

Vincent Smith's entrepreneur dreams of being the best butcher are interrupted when he instantly falls for Terry (Nina Axelrod), a young and terribly gullible blonde spared from becoming the next culinary delight. The subplot involving attempts at assimilating her into the family, marriage and a love triangle drama lead to several other jokes which commendably affect the main storyline to a satisfying, chainsaw-swordfight conclusion. Another noteworthy aspect to 'Motet Hell' is seeing John Ratzenberger as a nameless drummer before finding a career as mailman Cliff Clavin in 'Cheers.' Over the years, the film garnered a following on home video, saving it from obscurity and turning it into a cult horror classic.

Shout! Factory brings 'Motel Hell' to Blu-ray as a two-disc Collector's Edition under the distributor's Scream Factory line. The Region A locked, BD50 disc and DVD-9 copy on the opposing panel are housed inside a blue, eco-elite case with reversible cover art and cardboard slipcover. At startup, viewers are taken to a menu screen with music and full-motion clips. Buy direct from the website and fans get an exclusive, limited edition poster of the newly commissioned artwork with their purchase!

'Motel Hell' is open for business with a generally pleasing 1080p/AVC MPEG-4 encode. However, a few troubled spots, likely coming from the source, keep the overall presentation from being the best place to vacation. White specks and dirt occasionally litter the 1.85:1 frame, and the many blurry scenes are related to the age and condition of the print. Although the image is awash with a fine layer of grain, its thickness does tend to vary. While black levels are mostly satisfying and accurate, there are a couple moments of where shadows and the darker portions look murky. Contrast is also a bit inconsistent, looking crisp and comfortably bright one minute but dull and flat another. On the plus side, colors are animated with well-saturated primaries, and overall definition is a marked improvement over previous home video editions.

On the audio front, the cult slasher comedy arrives with an equally amusing if slightly stronger DTS-HD MA stereo soundtrack. Disregarding the little bit of air and hissing sometimes heard in the background, the soundstage is surprisingly broad with lots of warmth and a satisfying sense of presence. Much of this is thanks to the musical score spreading across the channels with excellent balance and fidelity. The few action sequences, particularly the chainsaw battle, also widen the soundfield with fluid movement and convincing off-screen effects while maintaining distinct clarity of the vocals in the center. The lossless mix exhibits a nicely detailed mid-range and adequate low bass, making the high-rez track a great complement to the film's dark and twisted sense of humor.

Kooky and darkly offbeat, with a warped sense of humor, 'Motel Hell' is the blackest of satires produced at the height of the "slasher" movie craze. With wonderful performances by Rory Calhoun and Nancy Parsons, the little film has grown into a cult horror classic for those who can enjoy the story's wickedly comical sensibilities mixed with a healthy heaping of gore. The Blu-ray arrives with a strong audio and visual presentation and a welcomed collection of supplements. The overall package should please devoted fans and will sit proudly in their collections.

Sale Price 14.21
Buy Now
3rd Party 9.44
In Stock.
See what people are saying about this story or others
See Comments in Forum
Previous Next
Pre-Orders
Tomorrow's latest releases