Set in present day Los Angeles and told entirely from the perspective of the Monster. After he is artificially created, then left for dead by a husband-and-wife team of eccentric scientists, Adam is confronted with nothing but aggression and violence from the world around him. This perfect creation-turned disfigured monster must come to grips with the horrific nature of humanity.

Set in the 21st Century in what looks like Los Angeles possibly serving as "any major metropolis USA," 'Frankenstein (2015)' offers a curious, fresh take on Mary Shelley's 19th Century masterpiece of science playing God while also not really bringing anything new to the table. That may sound like a contradiction in terms, but such is the case in this low-budget production that at least stays true to the core themes of the seminal novel, which warned of science's sometimes want of mastery over nature. British filmmaker Bernard Rose, director behind now cult favorites 'Candyman' and 'Immortal Beloved,' passionately translates Shelley's central thesis for contemporary moviegoers with a sense of urgency and poignancy. Rose, who also wrote the script, tells it in a way that perhaps today's audience can still see the tale's continued importance, as something they can empathize and identify with. Most notably, he has done away with many of the horror elements often associated with the story and doesn't succumb to typical depictions of the often misunderstood, nameless creature.

For this retelling or reimaging or readaptation — whatever term people feel best suits what Rose is attempting to accomplish — the creature, as portrayed by the talented Aussie Xavier Samuel, begins his life as a newborn infant, even suckling on the fingers of his creators and wanting to be feed only via bottles. A voiceover from a future, wiser, and pensively self-aware creature — which confusingly contradicts the film's final events — explains the growing pains, from having to walk and speak to the dreadful understanding of feeling unwanted and neglected, from a philosophical perspective. The symbolism and Rose's intentions in these early sequences can feel a bit heavy-handed at times, leaving little room for interpretation, but he carries his meaning through the rest of the movie. Samuel's creature, who goes by the name Monster because an unexplained degenerative disease makes him look hideously deformed, is greeted by the cruel reality of a modern, so-called civilized people who greet him with contempt, hatred and harshly biased judgment. 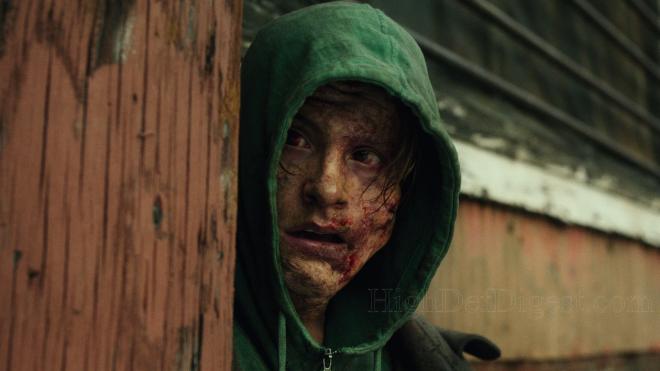 Once out the lab where he was created and abandoned by his creators, Monster struggles with building a sense of identity, seeking his purpose and finding his place in society, which is suggestive of going through adolescence. Following the basic Hollywood storyline, Monster is able to make friends with a blind homeless man (Tony Todd), whose kindness and friendship makes the creature feel somewhat secure, but in a twist, an unfortunate experience with a charitable prostitute who reminds him of his ugliness pushes him over the edge to seek answers from those who breathed life into him. Another interesting twist to the original tale are actors Danny Huston and Carrie-Anne Moss sharing the split personality of Victor Frankenstein, with Huston taking the name while Moss plays his wife and partner in crime Marie. While Huston unconvincingly plays the apathetic, clinical father, Moss is excellent as a mother figure who labors to love a literal monster she figuratively birthed. Sadly, Rose fails to do more with this intriguing aspect, focusing more on a dramatic revenge angle.

Arguably, where Rose's 'Frankenstein' does succeed is in the way he manages to make the classic piece of literature relevant for contemporary audiences, updating the story with undertones of today's sociopolitical climate. Granted, the plot makes clear Monster, who is later named Adam, is the result of illegal cloning and a product of an unrestrained science run amok, making it somewhat difficult to relate with him as opposed to the creature Shelley imagined as a darker version of our humanity. Nevertheless, viewers are allowed to sympathize with this modernized version of the iconic figure, watching him agonize and be torn with feelings of alienation, abandonment and forced into a sense of otherness. Some moments, such as an abusive and rather coldblooded cop, are far-fetched and tend to detract from the film's central appeal, but when Rose brings it back to the real heart of the matter, tension builds as Monster finally confronts questions of his existence and origins. Then again, it's a missed opportunity for a much deeper, meaningful tale, comparable to Shelley's original.

Alchemy Entertainment brings 'Frankenstein (2015)' to Blu-ray on a Region A locked, BD25 disc housed in a standard blue keepcase with a shiny slipcover. At startup, viewers can skip several previews to a static menu with music.

Shot entirely with the use of HD cameras, the video comes with the expected sterilized digital look that's usually off-putting, but the photography is just stylized enough to make the presentation appealing. Much of the palette is controlled and subtly subdued, giving the picture a somewhat grayish tone, but primaries, especially reds and blues, are richly saturated and energetic, providing the 1.78:1 image with a lively pop. Contrast is also bright and well-balanced with crisp, brilliant whites, and although brightness levels are, for the most part, spot-on, allowing for some appreciable dimensionality, blacks could be a tad stronger in couple minor spots. Also, there are a couple very mild instances of banding in the shadows, but they're not too distracting. Except for a few less than pleasing moments, fine lines and objects are razor-sharp while facial complexions are highly revealing with lifelike textures throughout. All in all, it's a terrific-looking presentation.

The monster mumbles and grunts his way through the city streets with a nicely satisfying Dolby TrueHD soundtrack.

On various occasions, atmospherics provide a bit of action in the rears, such as the sounds of city noise and the leaves of trees rustling, but sadly, it's not often enough to fully immerse the listener into the story. During some of those moments, panning appears smooth and seamless, appreciably expanding the soundfield, although they also tend to draw attention to themselves. Much of the action is maintained in the fronts, delivering a very welcoming and expansive soundstage with consistent background activity and lots of convincing off-screen effects. Vocals are well-prioritized and intelligible from beginning to end, and the mid-range exhibits plenty of detailed clarity, keeping the action distinct even during the loudest segments. The design also comes with an impactful and weighty low-end that provides the action some depth.

Set in the 21st Century, 'Frankenstein (2015)' offers a curious, fresh take on Mary Shelley's 19th Century masterpiece that while entertaining and overall satisfying, doesn't really dig deeper into its own subject matter. Starring Xavier Samuel, Danny Huston and Carrie-Anne Moss, the low-budget adaptation, nonetheless, comes with just enough intriguing ideas to be worth a watch for fans of the classic masterpiece and the iconic monster of horror. The Blu-ray arrives with a near-reference picture quality and a highly enjoyable audio presentation. Supplements are sadly wanting, but the overall package is worth checking out for fans of the well-known story.

Sale Price 7.88
Buy Now
3rd Party 7.88
In Stock.
See what people are saying about this story or others
See Comments in Forum
Previous Next
Pre-Orders
Tomorrow's latest releases