Favoring a modern gothic style and a strange, mysterious atmosphere, Candyman is an uncanny, inescapable and surreal nightmare that haunts the imagination of its audience long after it is over. While director Bernard Rose's approach to his own script, based on Clive Barker's short story "The Forbidden," is not unusual or uncommon in the horror genre, the film is nonetheless an evocative, illusory blend of psychological terror and the standard "slasher" blueprint. Rose generates a creepy tone and mood before jumping into the gore with intriguing images of urban graffiti and talks of local legends, mixed with undertones of social inequality. Most enthralling is the image of a man over six feet tall, wearing a heavy brown-fur trench coat, standing motionless at the end of a parking garage, head cocked back and staring at the ceiling. His voice echoes like the booming sounds of thunder as he walks in his polished shoes towards viewers.

This isn't the first time we'd seen this ghostly forbidding figure. We were first introduced to the titular character (an awesome Tony Todd in the role that has since made him a beloved genre icon) during the opening segment as a university student is interviewed on a scary legend within the poor inner-city communities of Chicago. It's the standard scare jump where Candyman suddenly appears behind a young girl after calling his name five times in front of the mirror, similar to "Bloody Mary" lore. But after this, Rose makes his audience wait a long while for another appearance, instead placing more focus and attention on building an air of folklore mystery. Although the director of Immortal Beloved and Ivans Xtc hasn't made another feature of significant note, the British-born filmmaker is a craftsman as demonstrated in the way the camera dreamily moves and follows characters or seems fixed unnervingly on specific moments. 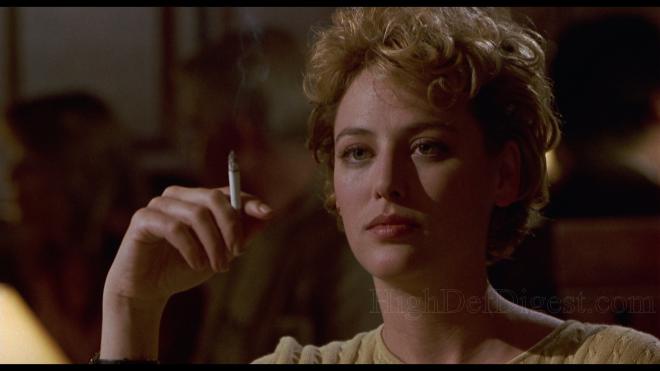 Rose is particularly interested on Virginia Madsen when it comes the camera lingering for long stretches of time. And understandably so since she is the star, Helen Lyle, a graduate student who grows fascinated by the urban folklore while conducting research for her thesis. With friend and colleague Bernie (Kasi Lemmons) in tow, she investigates a recent unsolved murder related to Candyman in the Cabrini–Green district, a nearby housing project controlled by gangs, infested with drugs and largely ignored by society. Though she thinks the research purely academic, Rose generates skepticism about her motives, as if there were a deeper, more significant connection that Helen is not yet aware of. And he maintains this persistent air of cynicism and doubt with the subplot of a suspiciously unfaithful husband (Xander Berkeley), making our heroine feel all the more alone as the story progresses to a satisfying twist.

To this day, memories of seeing Candyman on the big screen opening weekend persist. I remember simply being enchanted by the fairytale-like way in which Rose presented an otherwise typical "slasher," distinguishing the production from other bizarre genre entries of the period. Images of a frightful, deformed figure that suddenly appears where he wishes are etched in memory while the bellowing voice of Tony Todd uttering lines in poetic, preacher-like rhetoric haunt the dreams of audiences. The most seductive and enduring aspect of Rose's adaptation is surely Candyman's origins, a sad tale of injustice and bigotry where a painter's right hand was callously replaced with large hook. While this might make him one of the more tragic horror villains, it also makes him a terrifying monster because he blindly kills from a wounded vengeance that ironically asks victims to be willing sacrifices his resentful rage of life.

Imported from the United Kingdom, this Blu-ray edition of Candyman comes courtesy of Universal Pictures UK. The Region Free, BD50 disc is housed inside a slightly thick, blue keepcase. At startup, viewers are taken directly to a menu screen with full-motion clips and music playing in the background.

Candyman breaks the Blu-ray mirror with a strong yet somewhat disappointing 1080p/VC-1 encode (1.85:1). The presentation is arguably good because it's an upgrade to previous home video editions, offering better clarity and resolution throughout with a welcomed, thinly-layered grain structure. But at the same time, it's not a leaps and bounds improvement since much of the picture is on the soft side with some mild posterization in the highlights and a bit of crush in the darkest portions. In fact, when compared to other titles from the same period, this is a mediocre, second-rate presentation with fairly weak contrast and average black levels. Colors benefit the most with bold primaries, but even then, the overall palette is rather dull with skin tones skewed to the red.

Breathing down the necks of viewers, the stylishly haunting horror flick is summoned with a very good and enjoyable DTS-HD MA stereo soundtrack. I'm not entirely sure if the movie was originally recorded in Dolby Stereo or Dolby Digital, but considering the production year, it is very likely this is a faithful presentation of the original elements. In either case, the lossless mix is nonetheless quite satisfying, delivering a clean and engagingly wide soundstage with lots of amusingly convincing off-screen effects. With smooth, fluid panning across the channels, dynamic range exhibits excellent clarity and separation in the action and most importantly in Philip Glass's haunting score. While dialogue is distinct and well-prioritized, an adequate low-end provides depth and weight.

Favoring a modern gothic style and a strange, mysterious atmosphere, Candyman is an uncanny, inescapable and surreal nightmare that haunts the imagination of its audience long after it is over. Starring Virginia Madsen and Tony Todd, director Bernard Rose generates a creepy mood before jumping into the gore with intriguing, dreamlike camerawork and talks of local legends, mixed with undertones of social inequality. The Blu-ray arrives with a strong yet comparably average picture quality and a more satisfying audio presentation. Lacking bonus features, this bare-bones release will likely only summon the most devoted of followers.

Sale Price 16.99
Buy Now
3rd Party 10.99
In Stock.
See what people are saying about this story or others
See Comments in Forum
Previous Next
Pre-Orders
Tomorrow's latest releases