The Americans and Soviets waged their Cold War on several fronts, but rather than sending troops to a battlefield, the two superpowers often skirmished on a playing field, where a thrilling display of athletic prowess enhanced the perception of political and moral strength. Many historians have termed the war a chess match, with each nation making calculated, preemptive moves designed to intimidate and befuddle their opponent, and one of its most memorable battles ironically brought that analogy to life. When American Bobby Fischer met Soviet Boris Spassky for the World Chess Championship in Reykjavik, Iceland in 1972, pundits labeled the showdown the Match of the Century, as two highly skilled adversaries from two opposing cultures engaged in a war of wits to determine once and for all which country cultivated the world's most fertile and facile brain. The series of matches held the globe spellbound for several weeks. Every move was telecast live and breathlessly analyzed to a fare-thee-well by nerds and sportscasters alike. For a brief time, chess was cool, thanks to two men who wielded pawns, knights, and bishops like swords, and sought to crush each other with the same air of finality as a nuclear bomb.

'Pawn Sacrifice' chronicles this monumental head-to-head duel, yet does so almost exclusively from Fischer's perspective. With style and insight, director Edward Zwick's portrait emphasizes Fischer's working class upbringing (ironically, his mother was a Communist sympathizer), off-the-charts intelligence, and the psychological afflictions that begin to unhinge him during his dogged pursuit of the championship title. It's a captivating tale, sure to jog the memory of anyone who lived through it, but by only providing one side of the story, the film seems unbalanced and a bit biased. Impeccable production values, excellent performances, and an elegant cinematic sense keep us engaged, but as hard as Zwick tries to make the action vital and visceral, a nagging feeling of sterility pervades the piece. That's chess, some may argue, but without emotion and gravitas, this international confrontation is all bark and no bite.

Fischer, portrayed with wild-eyed gusto by Tobey Maguire, is a self-taught child prodigy who, like a Soviet robot, is systematically trained to become America's greatest chess player. He may be an undisputed genius capable of staggering achievements, but he struggles to relate to anything other than the pieces on the board, and as he matures, the game that so obsesses him also begins to torture him. (As his mentor, Father Bill Lombardy [Peter Sarsgaard], once says with a mixture of awe and despair, "This game...it's a rabbit hole.") Disturbing personality traits begin to surface that threaten Fischer's professional destiny and personal life, and his vociferous objections over how the Soviets run their chess program contribute to his reputation as a quirky, arrogant hothead. Paranoia also begins to creep into the mix, heightening Fischer's instability and alienating his closest allies.

His manager, Paul Marshall (Michael Stuhlbarg), and Father Lombardy try to keep him - pardon the pun - in check, but Fischer, who marches to the beat of a very different drummer, rarely can be constrained. His desire to beat the Soviets is unquenchable, but he only wants to play on his own terms, which causes serious strife within the international chess community. The Soviets are hungry for the showdown because, as Marshall so astutely opines, "chess dominance proves Soviet intellectual superiority over the decadent West," while the Americans, in turn, view the match-up against Spassky (Liev Schreiber) as "a poor kid from Brooklyn versus the whole Soviet Empire," which puts tremendous pressure on Fischer's slight shoulders. Hyperbole aside, the importance of the Fischer-Spassky tournament cannot be underestimated and goes unnoticed by no one. "We lost China, we're losing Vietnam," Marshall says. "We have to win this one."

Any follower of history knows the story's outcome, which makes the depiction of all the behind-the-scenes events critical to the film's success. The devil is in the details, and although Zwick works hard to make 'Pawn Sacrifice' visually interesting and the literate script by Steven Knight successfully gets under Fischer's skin, the movie's momentum stalls just when it should be gaining speed. Like a colt out of the gate, 'Pawn Sacrifice' starts strong, immersing us in Fischer's urban culture, meteoric development, and cluttered psyche, but as the story progresses, the character study stagnates and becomes a tedious series of outbursts, tantrums, and bizarre behavior. Maguire's spot-on performance makes Fischer a fascinating - and appropriately exasperating - figure, but without a narrative crescendo all that sound and fury signifies very little.

Part of the problem is the film's sketchy treatment of Spassky, the closest thing the Soviets had to a rock star during the '60s and '70s. An appropriate aura of mystery surrounds him, but to fully grasp the import of this Ali-Frazier type of confrontation and appreciate what's at stake, we need more perspective from the Russian side. Sure, we want the American to beat who we perceive to be the Russian bully, but the conflict would be far more compelling if we had a better sense of Spassky's stresses, and who he is as a man. Schreiber brandishes a poker face most of the time and mutters his Russian dialogue with precision, but sadly his Spassky remains elusive.

Another chess movie about a child prodigy, 'Searching for Bobby Fischer,' balances its cerebral story with enough honest emotion to make it both stimulating and endearing. 'Pawn Sacrifice' can't follow that blueprint, because Fischer isn't just unlikeable, he's insufferable. Zwick makes sure we appreciate his genius and achievements, but maybe, like the other characters in the film (and the chess community as a whole), we just lose patience with him over time...which makes it difficult to cheer for his victories the way we cheer the climaxes of other sports movies with equally pugnacious and challenged heroes.

'Pawn Sacrifice' is a well-made film with admirable intentions, but it doesn't gel the way it should. Fischer is a figure of astounding complexity, and maybe it's too much to ask of this or any movie to encapsulate his triumphs and frailties in such a short time span. Though it gives us a glimpse of the dark side of genius and paints a vivid historical portrait, 'Pawn Sacrifice' leaves us searching for a better Bobby Fischer movie. 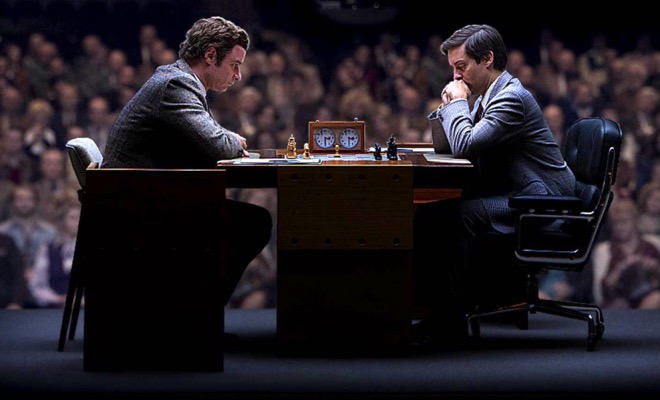 'Pawn Sacrifice' arrives on Blu-ray packaged in a standard case inside a sleeve. A leaflet containing the Digital HD copy code is tucked inside the front cover. Video codec is 1080p/AVC MPEG-4 and audio is DTS-HD Master Audio 5.1. Once the disc is inserted into the player, previews for 'Trumbo' and 'Everest,' and teasers for 'Danny Collins' and 'I'll See You in My Dreams' immediately pop up before the static menu with music.

A lush, wonderfully balanced 1080p/AVC MPEG-4 transfer draws us into the drama and enhances the film's period feel. Superior clarity and contrast brings the New York City, Southern California, and Icelandic locations to brilliant life, while crisp details and nicely saturated hues lend even the most sterile interiors a welcome sense of warmth. Black levels are rich and deep, flesh tones remain natural and stable throughout, and close-ups zero in on facial blemishes, pores, and stubble with a laser focus. Shadow delineation is excellent, background elements are easy to discern, costume textures are vibrant, and the overall image exude an organic, film-like feel that's quite pleasing. Not a nick, scratch, or errant mark sully the pristine source material, and no noise, banding, or other imperfections crop up. This is a beautiful rendering from start to finish that keeps the eye engaged and should delight those who appreciate fine cinematography.

The DTS-HD Master Audio 5.1 track funnels clear, robust sound throughout the room. Though noticeable surround activity is faint at best, the mix fills the listening area with ease, as James Newton Howard's stirring score and various '60s and '70s soundtrack tunes cascade across all five channels with excellent fidelity and depth of tone. A wide dynamic scale handles all the highs and lows without a hint of distortion, and strong bass frequencies provide essential weight and a few potent rumbles. (The audio is also cleverly used in a variety of ways to depict Fischer's heightened sense of sound.) Stereo separation across the fronts nicely widens the soundscape, subtle atmospherics and ambient effects come through cleanly, and all the dialogue is easy to comprehend. It's just a shame more sonic action doesn't bleed into the rears.

The only extra is a slick, shallow, and - at just over three minutes - far too brief featurette whose title, "Bobby Fischer, the Cold War and the Match of the Century" promises way more than it delivers. More of a commercial than a probing historical examination, the piece features pithy, sound-byte comments from director Edward Zwick, Maguire, Schreiber, and Sarsgaard that hype the film instead of get under its skin.

An incisive character study, 'Pawn Sacrifice' paints an intimate, warts-and-all portrait of a tortured genius, but its narrative drive stalls as the film progresses and, like the war between the Americans and Soviets, ends up leaving us a bit cold. Tobey Maguire nicely embodies chess prodigy Bobby Fischer, filing an impassioned performance, and Peter Sarsgaard and Liev Schreiber offer able support, but despite a strong start, the movie lacks the impact and confrontational fireworks we expect and crave. Universal's Blu-ray presentation skimps miserably on supplements, but provides terrific video and solid audio. Fischer is a fascinating figure and 'Pawn Sacrifice' insightfully depicts the man and his era, which makes this well-appointed biopic worth a look, despite its sterility.

Sale Price 7.96
List Price 19.98
Buy Now
3rd Party 7.96
In Stock.
See what people are saying about this story or others
See Comments in Forum
Previous Next
Pre-Orders
Tomorrow's latest releases