In 1947, Dalton Trumbo (Bryan Cranston) was Hollywood's top screenwriter until he and other artists were jailed and blacklisted for their political beliefs. Trumbo (directed by Jay Roach) recounts how Dalton used words and wit to win two Academy Awards and expose the absurdity and injustice of the blacklist, which entangled everyone from gossip columnist Hedda Hopper (Helen Mirren) to John Wayne, Kirk Douglas and Otto Preminger.

Dalton Trumbo was one of the finest and most reliable screenwriters during cinema's famed Golden Age, but sadly he's better known as the poster child for the notorious Hollywood Ten, a group of talented and respected film professionals who were attacked for their Communist sympathies, imprisoned because of them, and blacklisted by their own industry. A vicious witch hunt run by crazed, paranoid, and publicity-hungry politicians in the late 1940s (and abetted by scared shitless studio executives) targeted Trumbo and his colleagues, all of whom symbolize what's often referred to as the most shameful period in Hollywood history.

Yes, the blacklist severely curtailed Trumbo's earning potential, but it couldn't quash his creative spirit or, more importantly, his steely will, and thanks to a number of supportive producers and directors, Trumbo continued to write, using pseudonyms and "fronts" to disguise his identity and thumb his nose at the corrupt, holier-than-thou system that royally screwed him. Two of the screenplays that didn't bear his name ('Roman Holiday' and 'The Brave One') won Oscars, and many years later the Writer’s Guild of America finally mandated that movie prints be altered so he and other blacklisted scribes could have the screen credit they earned and deserved.

Trumbo's tale is sad, frustrating, inspirational, and ultimately triumphant, but unfortunately the film treatment of his struggles lacks the bite and verve that defined the man. Director Jay Roach, who has built a career helming wacky comedies, can’t fully embrace the story’s gravity, lacing it instead with an awkward whimsicality that panders to a cartoonish idea of Old Hollywood, where larger-than-life personalities reigned supreme. That’s the realm of the Coen brothers, who can brilliantly lampoon Hollywood while making sharp observations about its culture, quirks, and artifice. (Just watch ‘Barton Fink’ and ‘Hail, Caesar!' to get the picture.) It often seems as if Roach - consciously or not - copies the Coen's inimitable style and tone, and in the process misses the chance to bring industry icons down to Earth and depict them as real people with agendas, axes to grind, insecurities, and fears.

What ’Trumbo’ really needs is a writer like Trumbo to tell his story - someone who can infuse it with energy, color, and a bold directness that makes us sit up and take notice. 'Trumbo' should be a powerful, thought-provoking tale, but in Roach’s hands it’s disappointingly anemic. The critical message of valuing free speech above almost any other right and defending one’s ability to pursue their chosen profession no matter their personal beliefs or proclivities comes through loud and clear, but screenwriter John McNamara trumpets it in a dull, by-the-book manner that belies Trumbo’s eccentric spirit.

The film opens in 1947, just as Trumbo really hits his stride as a top screenwriter. But his outspoken nature, commitment to standing up for the little guy, and far left political views (he was a proud, card-carrying member of the Communist Party) land him in hot water when the Red Scare begins. Rather than quietly cooperate, Trumbo baits the Congressional panel that subpoenas him and convinces his cronies to do the same. And before anyone can say Joseph McCarthy, they’re all slapped with a contempt charge and sent up the river for a year. When they’re finally released from prison, the Hollywood landscape has changed and they’re persona non grata, their names etched on a list so black finding work is impossible.

Or is it? Trumbo refuses to lay down and die, and with the help of independent producer Frank King (John Goodman), he finds a way to beat the system and carve out an undercover niche career, doggedly persevering until he engineers a most unlikely resurgence.

The good news about ‘Trumbo’ - aside from Bryan Cranston’s captivating, Oscar-nominated performance that captures the title character’s essence even when the script betrays him - is that it gets the bulk of the facts right. (Yes, Trumbo really did write his scripts in the bathtub, often with a parrot on his shoulder.) It’s refreshingly blunt and unapologetic about Trumbo’s strong Communist ties (although he was far more rabid and militant than the film suggests), and truthfully chronicles Trumbo’s career during the blacklist years (although it does omit the writer’s self-imposed Mexican exile, housing him and his family in a bucolic middle-class suburb instead). Too many scenes with the wife and kids, however, steer the story into Afterschool Special territory and away from the dirty, soul-crushing dealings of Hollywood and Washington that so cruelly impact Trumbo’s life.

‘Trumbo’ also stumbles in its depictions of iconic movie stars, an always treacherous minefield to navigate. The picture scores points for including actual newsreel footage of Humphrey Bogart and Lauren Bacall attending House Un-American Activities Committee hearings (as well as random snippets featuring Audrey Hepburn, Gregory Peck, Deborah Kerr, Robert Taylor, Danny Kaye, Jerry Lewis, and Ronald Reagan), but juxtaposing their real-life images with Michael Stuhlbarg as the almost impossible to impersonate Edward G. Robinson and David James Elliott as John Wayne instantly takes the viewer out of the film. Both actors don’t resemble their respective counterparts and only mildly evoke them. Dean O’Gorman does the best job as Kirk Douglas, but Roach ultimately fails him by using actual clips from 'Spartacus' and intercutting them with matching shots of O’Gorman in Douglas’ role. Watching Jean Simmons and Laurence Olivier one minute and then O’Gorman as Douglas the next is jarring - and a bit laughable - to say the least.

Helen Mirren as the vindictive and all-powerful gossip columnist Hedda Hopper, Christian Berkel as director Otto Preminger, and Richard Portnow as MGM mogul Louis B. Mayer fare better in their parts because the famous people they portray are more elusive figures. Diane Lane is fine as Trumbo’s long-suffering wife, but her earnest performance strangely recalls her more engaging turn as Penny Tweedy in 'Secretariat.'

‘Trumbo’ may revive the acclaimed writer’s irrepressible spirit, but ultimately - and ironically - Hollywood lets him down again. There’s a far better film lurking somewhere inside ‘Trumbo,’ and it needs someone of its namesake’s caliber to find, cultivate, and release it. This on-again-off-again movie has its heart in the right place, but misses its mark, and proves they really don’t make ‘em like they used to when Dalton Trumbo was churning out scripts from his bathtub. 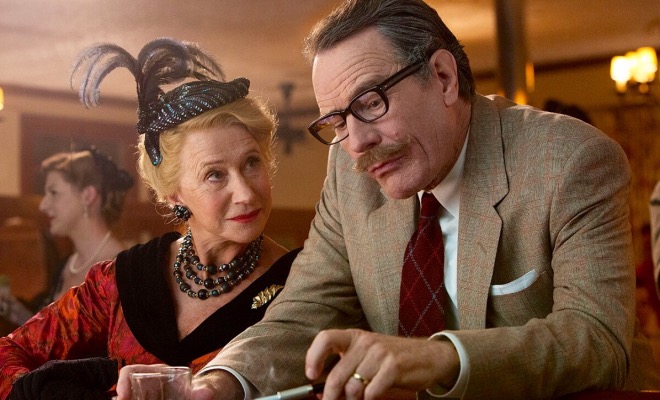 'Trumbo' arrives on Blu-ray packaged in a standard case. A leaflet containing the code to access the HD Digital Copy is tucked inside the front cover. Video codec is 1080p/AVC MPEG-4 and audio is DTS-HD Master Audio 5.1. Once the disc is inserted into the player, previews for 'Eye in the Sky' and 'Legend' ' and teasers for 'Suffragette,' 'Spotlight,' 'Steve Jobs,' 'Secret in Their Eyes,' 'Mr. Robot,' and 'Rock the Kasbah' precede the static menu with music.

Though not quite as lush as Technicolor, the 1080p/AVC MPEG-4 transfer from Universal flaunts a beautifully vibrant color palette that evokes the look of films from Hollywood's Golden Age. Exceptional clarity and contrast instantly grab our attention, and the pristine source material is free of any nicks, marks, or scratches. A bit more texture would enhance the picture's period feel (shooting on film might have been a wiser and more faithful choice), but it's difficult to complain when the image so brilliantly brings the story to life. Hedda Hopper's outrageous hats and colorful outfits are well rendered, and easy to discern background elements heighten the illusion of depth. Black levels are rich, flesh tones remain natural and stable throughout, and razor sharp close-ups highlight Trumbo's weathered face and unkempt mustache. No noise or banding disrupt the film's flow, and no digital doctoring could be detected. This is a very pleasing, immersive presentation that stimulates the senses even when the story does not.

Crisp, clear sound with plenty of fidelity and tonal depth distinguishes the DTS-HD Master Audio 5.1 track. While most of the sound emanates from the front channels, subtle atmospherics often bleed noticeably into the rears, creating a full-bodied, enveloping aural experience. Dialogue is well prioritized and always easy to understand, and a wide dynamic scale allows Theodore Shapiro's music score plenty of room to breathe. Sonic accents, such as typing strokes and slamming doors, are appropriately potent, and strong bass frequencies lend the mix a bit of heft. No distortion creeps into this very satisfying track, which seamlessly complements the narrative.

Just a couple of negligible supplements are included. A Roach commentary that might have shed more light on both Trumbo the man and the film would have been a welcome addition, but no such luck.

The story of Dalton Trumbo is outrageous, fascinating, layered, and intensely serious. Unfortunately, 'Trumbo' is none of those things. More of a Hollywood Blacklist 101 primer than an advanced course, this frustratingly bland portrait of a dark, shameful era and the eccentric writer who helped define it rarely rises above the mundane, despite a bravura performance from Bryan Cranston, who fully embraces the title character. Universal's Blu-ray presentation skimps on supplements, but earns high marks for its superior video and audio transfers. 'Trumbo' should have gone for the jugular in its depiction of how Communist paranoia gripped and transformed Hollywood in the 1950s, ruining lives and muzzling the creative voices of countless talented professionals, but it seems reticent to bite the hand that feeds it. The film talks the talk, but only rarely gets to the heart of several very grave matters. Cranston's spot-on portrayal drives 'Trumbo,' but only so far, which is why this nostalgic disappointment is only worth a rental.

Sale Price 11.19
List Price 13.95
Buy Now
3rd Party 2.93
In Stock.
See what people are saying about this story or others
See Comments in Forum
Previous Next
Pre-Orders
Tomorrow's latest releases