It's the season of joy, peace, and goodwill…unless you live in Bailey Downs. Last Christmas Eve, two teens came to a grisly end in a school basement. Now, one year later, a new set of horrors has come to town. As three friends explore the site of the massacre, a malevolent spirit is determined to keep them there forever. One of the first cops to the scene of the bloody murders has new complications as his seven-year-old son exhibits terrifying and violent behavior. And when a local family seeks reconciliation with an estranged aunt for the wrong reasons, they suddenly find themselves running in terror from Krampus, the demonic anti-Santa Claus. Not even St. Nick is immune to the terror as he fights back against a horde of zombie elves. This is destined to be a holiday no one will ever forget.

'A Christmas Horror Story' starts off somewhat slow, taking its time introducing the large ensemble cast and entwining the four interwoven stories together from the start. The first follows a trio of high school teens exploring their school's haunted basement where a grisly murder took place the previous year. The cop who investigated the massacre is traumatized but tries to move on with his life as he takes his wife and son to chop down a Christmas tree on cursed land. Another teen who originally planned to join the other three is on a road trip with her family, where they pass the cop's family, to visit a wealthy aunt, but their selfish, greedy intentions only succeed in provoking the punishing rage of Krampus. At the same time, Santa Claus battles a zombie outbreak on the night before Christmas, and all the cheerfully dark tales are bookended by William Shatner as a radio DJ playing the holiday classics while curiously reporting on a hostage situation at the local mall.

I may have given a bit more than arguably required in that synopsis, but it's a necessary evil for building interest since the story needs a bit of time finding its footing and ultimately get going. The movie opens with a flash-forward of a battered Santa walking through the stable where his magical reindeer sense another approaching danger — the one obviously hinted at in the production poster and promotional material, so no surprise how it will end. It's a cheap tease to keep audiences invested — and a fairly paltry one, at that — but when winding back the clock to twelve hours earlier, the pace noticeably slows down, turning the first fifteen minutes into a bit of a chore. Well, filmmakers Grant Harvey, Steven Hoban, and Brett Sullivan give viewers one brief but shockingly effective jump scare with the teens watching police footage of the murders, which I must admit made me jump out my seat, nearly dropping my box of cinnamon and pumpkin spice flavored almonds.

Eventually, once the individual stories are finally situated and neatly packaged, the movie dramatically improves. The problem with the first quarter is that it lacked a sense of purpose, one with a foreboding atmosphere and an air of dread, something to make clear the direction in which things will proceed. However, things quickly pick up with the teens finding themselves trapped in the basement without a way out, forced to spend the night there on Christmas Eve — a kind of "curiosity killed the cat" cautionary tale, perhaps? After Molly (Zoé De Grand Maison) shares the school's dark history, both for the benefit of viewers and her two companions (Shannon Kook and Alex Ozerov), each kid begins to hear and see things that are not actually there. This spooky ghost story is the strongest of the lot, generating some very potent scares and creepiness, though it's not very clear how it actually relates back to the holidays other than it taking place during the festive season. 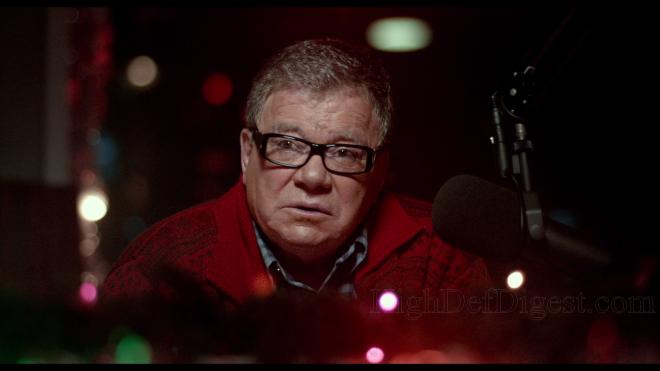 Nevertheless, it turns out to be a good starting point because it announces to the audience this is not your grandparents' traditional holiday viewing. Here, blood, gore and all out mayhem ring in the holiday cheer in fantastically jolly spirits, amazingly blending old-fashioned season greetings with standard horror tropes and subgenre conventions. Aside from the above supernatural tale, the cop (Adrian Holmes) and his wife (Oluniké Adeliyi) soon realize upon their return, their fairly timid and quiet boy (a talented Orion John) has brought back a disturbing presence with him. The better story involves the other family's self-centeredness and disrespect for elders summoning the Krampus, who does away with their naughtiness one by one until the daughter (Amy Forsyth) is left alone to fend for herself. Best of all is a hilariously twisted take on the zombie formula as poor Santa (George Buza) is forced to brutally smash, pulverize and massacre his infected elves. A wholly unexpected and darkly demented revelation to the pandemonium is the final ornament to the festivities.

From a script that took five writers to complete, and apparently three directors to execute, 'A Christmas Horror Story' is surprisingly more fun and wickedly entertaining than it should be. Or at least, it turns out better than initially anticipated, exceeding the expectations set forth by the previews. One can almost imagine the filmmakers grinning behind the camera while shooting the madness and absurdity, knowing this to be the perfect concoction for satisfying the voracious appetites of ravenous but festively jolly horror-hounds everywhere. Not since the Dutch horror comedy 'Saint Nick (Sint)' and the Finnish fantasy thriller 'Rare Exports' have genre fans been able to celebrate Christmas with gory delights, twisted merriment and violent cheer. Following in the footsteps of 'Trick 'r Treat,' the anthology horror movie may not become traditional holiday viewing, but it should be.

RLJ Entertainment brings 'A Christmas Horror Story' to Blu-ray on a Region A locked, BD25 disc inside a standard blue keepcase with a glossy and lightly embossed slipcover. At startup, the disc commences with a couple skippable previews before taking viewers to a menu screen with the usual options, full-motion clips and music playing in the background.

The big showdown between Santa and Krampus debuts on Blu-ray with an excellent 1080p/AVC MPEG-4 encode that shows plenty of razor sharp detailing in every scene. Filmed with the use of high-definition cameras, the digital-to-digital transfer comes with distinct fine lines, exposing every thread and stitch in the clothing and in the costumes of the mythical creatures. Facial complexions appear natural and appropriate to the climate, revealing every pore, wrinkle and negligible blemish, while the tiniest object and every Christmas decoration in the background is plainly visible and discernible.

Presented in its original 1.85:1 aspect ratio, the video also comes with clean, stable contrast, providing outstanding visibility in the distance during daylight sequences. However, as would be expected from the source, the digital photography looks fairly cheap, sterile and all-around bland. Basically, there's little life and vitality to the overall presentation. Thankfully, black levels are true and opulent, giving the image a nice and welcomed three-dimensional feel, and only a couple very minor instances of crush ruining the joyous spirit. There is also some mild banding in a few of the darkest sequences where shadow details tend to be lost. Luckily, primaries are vividly rendered and animated while a full-bodied array of warm secondary hues ring in the holiday cheer, making for a wonderfully bloody and gorily jolly film perfect for a darkly twisted Christmas.

The two mythical legends of the holiday season duke it out on a smashingly good, near-reference DTS-HD MA soundtrack that will not only surprise but should please even the Scroogiest amongst us. Other than the unexpected twist ending, listeners will enjoy a thriving soundscape with discretely, well employed effects in the rears, especially the segment with Krampus creepily stalking amongst the woods and in the church. In fact, the creature moves from the left side of the room to the right and back again with such fluid, flawless movement that it'll make viewers dart their eyes back and forth wondering if someone is walking behind them. Quieter scenes continue to occupy the surrounds with subtle atmospherics, from snow falling and trees rustling to minor commotions in the distance, creating a terrifically amusing and satisfying soundfield.

In the front soundstage, panning maintains excellent clarity thanks to superb channel separation and balance, allowing for even the most random of noises to smoothly move across the screen. The mid-range is detailed and extensive, pushing into the upper frequencies without the slightest hint of distortion, while the low-end is appreciably demanding with several startlingly imposing moments that nicely dig into the lower depths that will test the limits of one's subwoofer (bass chart). And amid all the mayhem and pandemonium, dialogue remains precise and well-prioritized in the center, making for wickedly good time this holiday season, one filled with plenty of fun scares and blood-curdling gore.

'A Christmas Horror Story' starts off somewhat slow, but once it gets going, the anthology horror film exceeds expectations with a variety of dark comedy, spooky scares, and a festive display of gory violence. It won't likely grow to become traditional holiday viewing, but for horror fans who also have a soft spot for the jolly season, the movie is the perfect piece for ringing in the Christmas cheer. The Blu-ray arrives with an excellent audio and video presentation, but there's sadly not much to be found in the supplements. Nevertheless, the overall package makes for the perfect stocking stuffer.

Sale Price 14.99
List Price 29.97
Buy Now
3rd Party 14.99
In Stock.
See what people are saying about this story or others
See Comments in Forum
Previous Next
Pre-Orders
Tomorrow's latest releases