Sex and the City

There is a scene about a third of the way through 'Sex and the City' that may be one of the most truthful moments ever to grace a "chick flick." Following an emotionally devastating scene wherein Carrie Bradshaw (Sarah Jessica Parker) has just been jilted at the altar by her long-time, "emotionally unavailable" love Mr. Big (Chris Noth), we see Parker -- sans make-up, and quite frankly looking horrible -- stare at herself in the mirror. In a single shot, Parker and 'Sex and the City' writer/director Michael Patrick King not only completely deglamorize their lead character (itself an incredible feat in a chick flick), but rip open the raw, universal emotions of betrayal, romantic loss, and primal abandonment. It's a moment of rare reflection in a genre known for fairy tale banality, and a scene that makes clear that, despite its glitzy exteriors and endless parade of hip fashions, 'Sex and the City' is no mere puff pastry of a rom-com entertainment. The movie will make you swallow some bitter pills along with the candy, and darn if this isn't the most astute movie about relationships to come out of Hollywood in ages.

'Sex and the City' -- the movie -- certainly had the odds stacked against it. I hadn't even seen an episode of the series before seeing the movie, yet knew enough about it to realize it was an almost impossible task for King to create a film that could both continue the storylines that were resolved at the end of the show, but also stand alone as a satisfying, cohesive whole. Add to that the need to juggle four separate, distinctly archetypical characters -- that's Parker's Carrie Bradshaw, Cynthia Nixon's firebrand Miranda Hobbes, Kristen Davis' restrained Charlotte York, and Kim Cattrall's famously slutty Samantha Jones, just in case you needed a roll call -- and give each a storyline befitting a jump to the big screen. It's a tall order, and one that 'Sex and the City' manages to conquer with great style, panache, and wit.

One of the many things that impresses about King's script is how focused it is. Though technically an ensemble of the four women, it's really Parker's show, and King is able to establish her from the get-go, even without prior knowledge of the series. Parker has completely internalized the character after playing her for six seasons, so as written by King we immediately know who Carrie is, and at what stage she's at in her romantic life. It's immediately clear what Carrie's stakes are with Mr. Big, and what risks she is taking by placing her faith in their pending nuptials after so many false starts. That gives 'Sex and the City' an urgency lacking in most romantic comedies, and this live-wire tension remains surprisingly taut throughout the film. King never lets go of this emotional through-line, so even as he weaves the supporting stories of the women, they never undermine Carrie's journey, but rather compliment and contrast it to potent effect.

The other subplots also pay dividends, even if some don't work quite as well as others. Nixon's is the strongest. Her chemistry with David Eigenberg (as her husband Steve Brady) was the series' most believable, second only to Carrie and Mr. Big, and again as written by King, the passionless state of their marriage as the film begins is painted with great truth and clarity. If on paper the ensuing infidelity storyline rings of typical melodrama, the way Nixon is able to convey Miranda's anger, betrayal, and resentment elevates it to the level of heightened drama. The resolution also sneaks up on us -- the choices Miranda and Steve make in the spirit of reconciliation may cause ire in some more traditional viewers, but it's startling how great an impact their final scene leaves us with.

Cattrall and Davis' suffer weaker stories. Though Cattrall's Samantha was always essential as the campy comic relief on the series, stretching her out to feature length begins to pull at the seams of an often two-dimensional character. Though her arc here reads on paper as weighty -- should she choose freedom or commitment? -- the result feels somewhat throwaway if still undeniably entertaining. It's really only Davis who gets short thrift, with no real arc to speak of. As the series ended, Charlotte really had nowhere to go anyway in her blissful happiness with adoring husband Harry Goldenblatt (Evan Handler), and here Davis seems to exist in the film only as an idealized counterpoint to the other women's dilemmas. Charlotte has the "dream life" of the white picket fence, which while useful in story terms is simply boring to watch. To Davis' credit she remains vastly appealing in the role, but there is something vaguely unsettling in the fact that her character's biggest scene is comic relief involving an attack of diarrhea.

If 'Sex and the City' truly has a major flaw, however, it's a bloated runtime. While the film moves quickly for the first two-thirds, King's insertion of yet another subplot, with Jennifer Hudson as Carrie's romantically-naive assistant Louise, almost slows it to a crawl. It's almost as if Hudson's character has wafted in from another movie, or as another excuse to show off cute Louis Vutton handbags. This extraneous bit is even made slightly worse in this Extended Cut of the film, which further expands the theatrical 148-minute runtime. Now we get a bit more of Carrie's longtime gay friend Standford Batch (Willie Garson), who is having relationship issues of his own, as well as other minor character bits. This material feels shoehorned-in largely to help to market the Blu-ray and DVD, but really adds nothing substantial to the film. It was wisely cut the first time around.

Regardless, these are not fatal problems and the box office success of 'Sex and the City' itself remains a cause for celebration. For here we have a movie that tackles a subject practically taboo in Hollywood cinema -- complex career women over forty with real sex lives! -- and treats it with humor, warmth, insight and drama. That King was able to so successfully continue the storylines of the TV series, as well as create a self-contained narrative that has a finite, satisfying resolution, is some kind of minor miracle. It's unfortunate that 'Sex and the City' will continue to be bagged with the tag "chick flick," as it is far more intelligent and unique than most films its ilk. So don't put off if you think the movie isn't for you, because 'Sex and the City' explores the human truths of modern relationships regardless of gender, and has a great time doing it.

I remember being impressed with how bright and bouncy 'Sex and the City' looked in the theater, and it looks even better at home. Colors are sensational -- bold, vibrant, and clean, with excellent fleshtones. Blacks are always rock solid, and contrast if a little too bright, still gives the image great depth and punch. Detail is uniformly excellent, with the finest textures -- from the clothes to the hair -- easily discernible. The source, too, is as impeccable as you would imagine for a new release. The transfer is also razor sharp but free of edge enhancement, and aside from very small bits of noise on some static backgrounds I found no artifacts to report. 'Sex and the City' looks great.

New Line provides Dolby TrueHD 5.1 Surround (48kHz/24-bit) and standard Dolby Digital 5.1 Surround (640kbps) tracks for 'Sex and the City', both in English. The TrueHD is about the strongest mix likely for a film like this, as it is lively and fun if not exactly gangbusters.

Surround use is fairly active throughout, and supports the romantic comedy action appropriately. There are some pronounced discrete effects during outdoor scenes, and during a couple of visits to various nightclubs where the use of music is nicely done. The appealing Mexico location also enjoys some pleasant, sustained atmosphere. Score bleed is also well-matched to the material. Tech specs are well up to the snuff, with dynamic range polished nd expansive, with surprisingly strong low bass that makes its presence known when needed (especially with the score and music). Dialogue is the real star of the show, though, and always sounds terrific. There are no balance issues, and this mix never sounds less than slick. For a romantic comedy mix, 'Sex and the City' should offer no complaints. 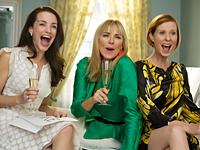 New Line has produced an adequate if far from expansive set of extras for 'Sex and the City.' (Given the film's handsome box office, I will be surprised if we don't see a double dip somewhere down the line.) All video materials are presented in 1080i/VC-1 video, with optional English and Spanish subtitles.

'Sex and the City' is a real surprise, offering a glimpse into the psyches of that rarity of modern Hollywood cinema -- women over 40 who actually have sex! Having never seen the show before seeing the movie, I easily slid right into the material and was entertained throughout by this wonderfully insightful and real romantic comedy. This Blu-ray is likewise very strong, with great video and audio, and solid (if not exceptional) supplements. 'Sex and the City' is well recommended, even to those unfamiliar with the original series.

Sale Price 8.48
List Price 14.98
Buy Now
3rd Party 29.99
In Stock.
See what people are saying about this story or others
See Comments in Forum
Previous Next
Pre-Orders
Tomorrow's latest releases