On the set of a playwright's new project, a love triangle forms between his wife, her ex-lover, and the call girl-turned-actress cast in the production.

Screwball comedy is a timeless art form, but it's indigenous to the 1930s and 1940s, an era that cried out for madcap antics and romantic hijinks to block out the harsh realities of the Depression and World War II. All the mix-ups, misunderstandings, and masquerades that define the genre provided moviegoers not only with fantasies that were grounded just enough in reality to be relatable, but also astute observations about human and social foibles that still ring true today. Though many have tried to modernize screwball and adapt it to contemporary sensibilities, it somehow strikes a false note in our current reality-obsessed day and age. Director Peter Bogdanovich arguably came closest to successfully duplicating and reviving screwball's elusive essence in his delightful and rollicking 1971 farce 'What's Up, Doc?', but his newest attempt, though well-intentioned, misses its mark by a mile.

'She's Funny That Way,' Bogdanovich's first feature in 13 years, is the kind of frantic frolic that looks good on paper, but doesn't translate well to the screen. It's carefully structured, appropriately loony, and populated by a host of engaging personalities, all of whom look like they're having a ball, but the jokes often fall flat, the characters are cardboard cut-outs, the actors try too hard, and there's no underlying theme to latch onto that laces the humor with wisdom. After a while, all the coincidences, obtuse connections, and partner swapping wear thin and devolve into a bit of a mess. And the ultimate resolution and surprise payoff seem like cop-outs by screenwriters who just ran out of steam.

Bogdanovich is one of those writers, along with Louise Stratten, his ex-wife. (You may recall she's the sister of Dorothy Stratten, a former Playboy playmate and Bogdanovich protégé, who was tragically murdered in 1980. Bogdanovich reportedly started dating Louise when she was only 14, but that's a story for another day...) And though their script is littered with loving references to a number of Golden Age classics, such allusions only make us pine all the more for the real screwball comedies of yore...films like 'The Awful Truth,' 'My Man Godfrey,' 'Nothing Sacred,' and 'You Can't Take It With You.' Some might call 'She's Funny That Way' a homage to such classics, but it's really closer to a pale imitation that contains many of the components but little of the heart, soul, and joie de vivre that define the best screwball movies.

Arnold Anderson (Owen Wilson) is a successful stage director with a penchant for hookers, whom he routinely bangs, then offers them $30,000 on the condition they instantly give up their lewd lifestyle and pursue their dreams. Though the practice is undeniably altruistic, it's also a way to absolve his guilt for cheating on his perky actress wife, Delta Simmons (Kathryn Hahn), who's set to star in his next production. After a particularly vigorous and satisfying roll in the hay with teenage prostitute Isabella Patterson (Imogen Potts), who wears her thick Brooklyn accent like a badge of honor, Arnold makes her the same lucrative proposition, which she gratefully accepts. Arnold never expects to see her again, but no good deed goes unpunished, especially in a screwball comedy. Little does he know Izzy is an aspiring actress, and a few days later she shows up to audition for Arnold's new play and winds up reading a scene with - you guessed it - his wife! The apoplectic Arnold tries to get rid of Izzy, but she nails the reading, and at the urging of Delta and the play's author, Joshua Fleet (Will Forte), he acquiesces and casts her.

Arnold also knows the play's leading man, lothario Seth Gilbert (Rhys Ifans), espied Izzy leaving his hotel room that fateful night and might let the cat out of the bag. Tangentially, Seth and Delta once had a fling, and some sexual tension still exists, much to Arnold's chagrin. Meanwhile, Izzy decides to see a flighty, self-obsessed therapist, Jane Claremont (Jennifer Aniston), who just happens to be Joshua's girlfriend. Joshua, however, becomes bewitched by Izzy and begins pursuing her, which angers both Jane and Arnold. On top of that, the aged Judge Pendergast (Austin Pendleton), one of Izzy's former clients, can't get her out of his head and relentlessly stalks her, even going so far as to see her therapist as well. Entanglements, of course, abound, and as the relationships collectively explode, there's plenty of ire, confusion, and abject disbelief to go around.

Bogdanovich keeps things moving, so interest never wanes, and a few amusing moments provoke some chuckles, but the story never really goes anywhere. The best screwball comedies seem to fly by the seat of their pants and flaunt a spontaneous, unpredictable feel that keeps us on edge. Unfortunately, 'She's Funny That Way' lacks that spark. From the get-go it's too rigidly structured and carefully plotted, and goes overboard in its effort to be zany, kooky, and risqué. The music, dialogue, quirky characters, New York locations, and ensemble nature of the piece all bring to mind Woody Allen, but such components never come close to approaching Allen's lofty standards. Even Allen's weakest comedies have some basis in reality, some relevance that connects with our collective psyche. 'She's Funny That Way,' though not completely bereft of meaning, is just a standard madcap romantic mix-up that over time saps instead of stokes our energy.

Wilson was born to play this type of befuddled role and asserts himself well (though Allen uses him to better advantage in 'Midnight in Paris') and Potts brings an infectious effervescence to Izzy that helps sustain the film during its weaker moments (even if her heavy Brooklyn accent starts to grate on the nerves over time). Hahn is good, too, but occasionally overplays her hand, as does Aniston, who's in full manic mode as the frazzled, impatient therapist. Her line readings vacillate between imitations of Teri Garr in 'Tootsie' and Lisa Kudrow in 'Friends,' which lends her performance an uncomfortable affectation. (According to Bogdanovich, Aniston was offered Hahn's part, but chose to play the therapist instead, a risky move that doesn't really pay off.) Pendleton always adds luster to any film in which he appears, and Cybill Shepherd and Richard Lewis perk up the proceedings in bit roles as Izzy's loud-mouthed, lower class parents.

A movie that calls itself 'She's Funny That Way' should have more laughs and shouldn't have to work so diligently to provoke the ones it gets. Bogdanovich, who's always had a hit or miss record, puts his best foot forward, but just can't deliver in the clutch. He wrote a script to satisfy a vision, rather than allowing his vision to emanate from the script. As a result, 'She's Funny That Way' feels forced and constrained, and in the free-wheeling, no-holds-barred world of screwball that's not just a cardinal sin, it's a death knell. 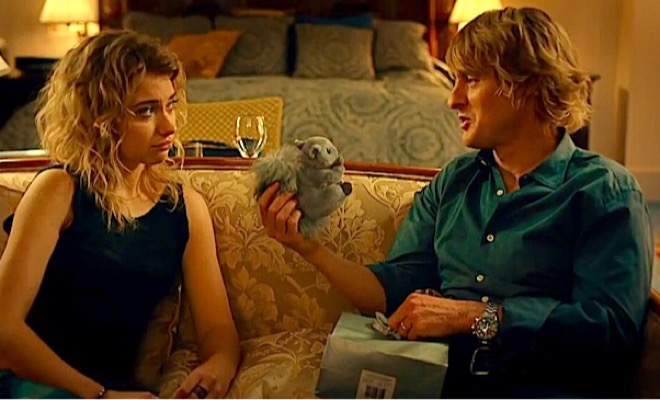 'She's Funny That Way' arrives on Blu-ray packaged in a standard case inside a sleeve with raised lettering. A leaflet containing instructions on how to access the Digital HD Ultraviolet copy is tucked inside the front cover. Video codec is 1080p/AVC MPEG-4 and audio is DTS-HD Master Audio 5.1. Once the disc is inserted into the player, trailers for 'Life of Crime,' 'They Came Together,' 'What We Did on Our Holiday,' and 'Some Kind of Beautiful,' as well as a promo for Epix, precede the full-motion menu with music.

A warm nostalgic glow bathes most of the interior scenes in 'She's Funny That Way,' and the 1080p/AVC MPEG-4 transfer from Lionsgate accurately renders it. Top-notch contrast and clarity contribute to the balanced, vibrant image that sports plenty of fine detail and a fair amount of depth. Colors are lush and properly timed, black levels are rich and deep, and whites are bright yet never bloom. Bogdanovich shot the movie entirely on location in New York City, and exterior sequences exude an organic immediacy that reflects the environment's urban flavor. Close-ups highlight facial features well (the female stars look especially glamorous), and the textures and patterns of costumes are nicely defined. No grain is evident in this digital presentation and the pristine source material is free of any nicks, marks, or scratches. Like many new releases, 'She's Funny That Way' is smooth, slick, and very easy on the eyes.

The DTS-HD Master Audio 5.1 track supplies clear, well-modulated sound that handles all the film's pedestrian audio chores with ease. Surround activity is limited, but some subtle ambience bleeds into the rears during restaurant and street scenes. All the face slapping and chin punches are crisp and distinct, but there's not much bass to lend the soundscape necessary weight. Edward Shearmur's music score and the period songs performed by Fred Astaire benefit from excellent fidelity and tonal depth, and all the dialogue is clear and comprehendible even during rapid-fire exchanges. No distortion creeps into the mix, and no surface noise disrupts the track's purity. All in all, this a standard new-release track that gets the job done without any unnecessary fuss.

Just a couple of supplements are included on the disc, and they're both fairly superficial.

'She's Funny That Way' attempts to recapture the madcap lunacy and joie de vivre of the screwball comedies of Hollywood's Golden Age, but a flimsy story, cardboard characters, and a forced presentation keep this romantic romp mired in mediocrity. A top-notch ensemble cast tries its best to energize the material, but never quite succeeds, and though a few bright moments distinguish this tale of an oversexed theatrical producer and the call girl who changes his life, there aren't enough of them to keep us engaged. Solid video and audio transfers make this flimsy farce easy on the eyes and ears, but not worth our time. Even fans of the genre will most likely want to skip this by-the-numbers comedy that's full of promise but rarely delivers. Do yourself a favor and go watch one of the bona fide screwball classics instead.

Sale Price 16.59
List Price 19.99
Buy Now
3rd Party 5.95
In Stock.
See what people are saying about this story or others
See Comments in Forum
Previous Next
Pre-Orders
Tomorrow's latest releases