A serial killer, who drains his victims for blood is on the loose in London, the Police follow him to a house owned by an eccentric scientist.

'Scream and Scream Again' is an odd little number that plays like a horror anthology where all the stories are actually related to each other but told in a nonlinear fashion. Interestingly, director Gordon Hessler ('Murders in the Rue Morgue,' 'The Golden Voyage of Sinbad,' 'Cry of the Banshee') makes sure not to let this fact be made apparent at the start, using the disjointed narrative structure as part of the movie's overarching mystery. Admittedly, the approach is the cause for a good deal of confusion and perhaps a tinge of frustration as viewers jump from one action piece to the next, sometimes creating the impression that certain events are taking place in different time periods. Adding to the confusion is each tale seeming as though of different genres: two function like standard horror flicks set in modern London, and another is an espionage thriller taking place in a pre-WWII totalitarian state while the whole thing converges into a bizarre, twisted sci-fi feature. Thankfully, Hessler uses this fragmented technique to draw in and surprise his audience by the end.

From a script by Hammer Films writer Christopher Wicking, based on the novel The Disorientated Man by the anonymous pseudonym Peter Saxon, the film opens with an unnamed man jogging through busy suburb streets before collapsing from a heart attack. When he wakes up in what seems like a typical hospital room, a quiet, tensely serious nurse doesn't answer any of the man's worried concerns and soon discovers his right leg had been removed while he was unconscious. With each visit, which doesn't last much longer than a couple minutes, another limb has been lopped off, a nightmarish scenario that's as equally disturbing as it is fascinating. Meanwhile, on the other side of London, Detective Superintendent Bellaver (Alfred Marks) is on the pursuit of a serial killer who drains his female victims of their blood. When learning the killer hunts his prey in a popular nightclub, the movie switches from a police procedural into an action flick with an extended chase sequence that's exciting while tallying on the mystery when the killer escapes by removing his right hand from the handcuffs attached to a police vehicle. 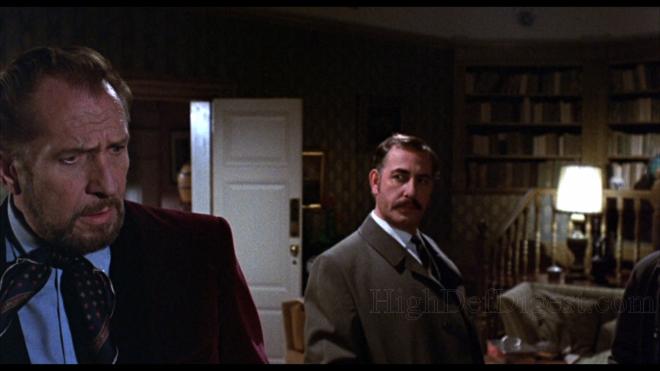 The questions continue to pile up when the filmmakers bring in three legends of the horror genre: Vincent Price, Christopher Lee and Peter Cushing. The above chase ends with the stylish, mod-looking killer trapped on the property of a convincingly confused Dr. Browning (Price), a seemingly irreproachable gentleman that supposedly conducts various experiments on human biology but nonetheless draws our suspicions as only the beloved Price can. The always darkly brooding Lee plays an unidentified government agent leading a team in an assignment that's never fully explained, but we simply see the illustrious actor sternly bark out orders as if working diligently protecting national secrets. However, it's also pretty obvious the man knows more of what is at the center of this film, of what is truly going on in this outwardly convoluted plot. The renowned Cushing appears briefly as a high-ranking official in the undisclosed oppressive Eastern European country where an officer (Marshall Jones) is killing other officials with a bizarre shoulder grip that makes the movie all the stranger, but at the same time weirdly entertaining.

'Scream and Scream Again' is considered the first time all three celebrated actors appeared in the same movie, except Cushing's role is more of a cameo appearance and isn't on screen for more than five minutes. As for Lee and Price, they only exchange a few words towards the end when all four presumably separate stories finally come together to a satisfying twist that somehow answers all our curiosities while also leaving viewers with even more questions to ponder. The delightfully wicked and demented conclusion adequately explains how each tale is related, but the motives behind the mad scientist twist are amusingly left to the viewer's possibly darker imaginations. The book, of course, provides a more thorough explanation, but Hessler smartly omits it so that his audience can concoct their own assumptions. And in constructing the entire movie as an assortment of disjointed tales, the Frankensteining production terrifically complements the plot's end result where each segment has to be pieced together in order to see the horrifying whole.

Gordon Hessler's 'Scream and Scream Again' comes to Blu-ray as a Limited Edition release courtesy of Twilight Time. The Region Free, BD50 disc is housed in the standard clear case accompanied by an eight-page booklet with color photos and a thoughtful essay written by screenwriter Julie Kirgo. At startup, the disc goes straight to a static menu with the usual options.

The British sci-fi thriller screams and hollers its way to Blu-ray with what appears to be fresh remaster of the original elements, which is a nice surprise. However, the AVC encode is far from perfect, as the transfer comes riddled with white specks throughout, some very light vertical lines in a couple scenes, instances of barely visible blotches and a bit of dirt here and there. Nevertheless, the source is in excellent condition, showing strong definition in the surrounding foliage, in the groovy clothing and in various furnishings. Awash with a very fine and consistent layer of natural grain, the 1.85:1 image has an appreciable cinematic quality with strong textural details in the faces of the cast. Although a bit on the low end of the grayscale, contrast is comfortably bright with clean, crisp whites while strong, true blacks with pleasing visibility in the darkest portions of the frame. The color palette is well saturated and accurate, particularly reds and greens. Though a couple sequences are justifiably softer than others, the presentation is sure to make fans happy.

The sci-fi favorite conspires and schemes with a decently good DTS-HD MA monaural track that won't likely impressive listeners, but it’s an adequate soundtrack that complements the film well. The ADR work calls attention to itself on several occasions, often making the dialogue feel distant and detached, but overall, the vocals are well prioritized and intelligible. Dynamic range is clean and stable though to be fair, the original design is noticeably extensive and doesn't really offer much in the upper ranges, even during the supposedly loudest action sequences. Imaging is affected by this, feeling somewhat narrow and constrained to the middle of the screen, failing to provide the picture with a sense of presence or allowing it much breathing room. Thankfully, neither the music nor the action seems terribly limited, but the soundstage also sounds pretty flat and there isn't much of a low-end to speak of. A couple instances of mild popping and noise rear their ugly heads from time to time, but all in all, the lossless mix makes for a nice listen fans can enjoy.

'Scream and Scream Again' is an odd little number that plays like a horror anthology where the seemingly unconnected stories are actually related to each other but told in nonlinear fashion. Director Gordon Hessler uses the disjointed structure to his advantage to make the Frankensteining production a surprisingly entertaining sci-fi/espionage/horror feature with a satisfying twist. The Blu-ray from Twilight Time arrives with a strong audio and video presentation though it's not to the caliber of other releases from the same period. With a decent set of supplements included, the limited edition package will likely only tempt cult enthusiasts, and it's worth a look.