Murders in the Rue Morgue / The Dunwich Horror

Your first frightening film is 1971’s Murders in the Rue Morgue. In early 20th-century Paris, a theatrical company with a specialty in Grand Guignol undertakes their most gruesome production yet. But when a madman with an axe to grind arrives on the scene, the stage is set for real mayhem and murder most foul. Will the backstage bloodshed be quelled – or is it curtains for the cast? Jason Robards and Herbert Lom star in this marvelously macabre mystery.

From the City of Lights (and frights), our tour of terror moves on to a small New England town in 1970’s The Dunwich Horror. When a beautiful student named Nancy catches the eye of the weird Wilbur Whateley, her professor, the good doctor and occult expert Dr. Henry Armitage, knows that no good will come of it. But as Armitage digs deeper into the Whateley family history, he uncovers a buried secret – and a plot intended to call forth an evil beyond imagination. A cult favorite that proves that The Old Ones are good ones, The Dunwich Horror stars Dean Stockwell, Ed Begley, and Sandra Dee.

Despite its title, Gordon Hessler's 1971 chiller is as much an adaptation of Edgar Allan Poe's seminal detective story as it is a very loose reimagining of Universal Studios's classic tellings of 'The Phantom of the Opera,' which is to say, not much. In fact, it could be argued the movie is a smashup of the two, borrowing more from the latter than the former, taking inspiration from Poe in name only. The original tale by the Master of the Macabre is the massively influential murder mystery that essentially invented the detective genre and laid the foundation by which all detective stories would follow, the familiar blueprint and common tropes that eventually gave rise to the likes of such beloved characters as Sherlock Holmes. The movie's plot, set in Paris at the turn of the century, follows a theater troupe specializing in violent, gory stage productions of well-known popular stories, such as Poe's, which the troupe finishes performing when the murder of one of its actors occurs. Aside from the stage play, Hessler's film has little to do with its source, except that the plot is more a murder mystery than horror in the traditional sense.

From a script by Hammer Films regular Christopher Wicking and popular genre author Henry Slesar, the story borrowing more from 'The Phantom' becomes evident early on when the killer is revealed from the onset to be Herbert Lom as Rene Marot, wearing a flesh colored mask covering only the upper portion of his face. Jason Robards also stars as Cesar Charron, the director and manager of the troupe, and the murders of various other people in his life make him a primary suspect for the police. However, it doesn't take long before switching suspicions to a masked killer conveniently evading capture, turning the tale into one where the killer's motives are all that matters in the end. Sadly, the revelation is not much of a surprise or all that satisfying, to be honest, but maintaining the audience's interest is Hessler's camerawork, pacing the story with a brisk rhythm and creating some fascinating, oneiric moments, which is especially and memorably true of Madeline's (Christine Kaufmann) dreams sequences. Aside from that, 'Rue Morgue' fails to capture the imagination of Poe fans. (Movie Rating: 3/5) 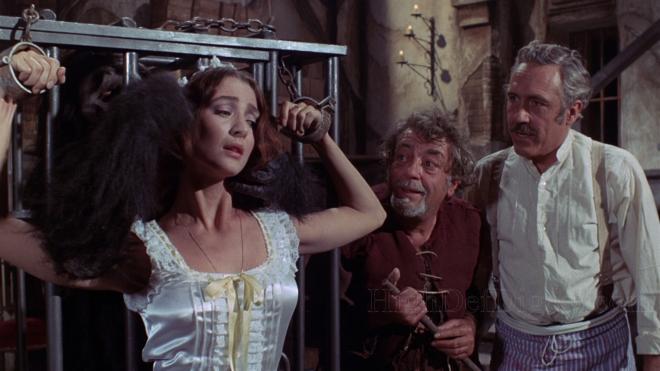 Unlike the movie above, 'Dunwich Horror' is a direct adaptation of a classic tale of horror, this time from the likes of genre icon H.P. Lovecraft. Directed by Daniel Haller, the 1970 production about a young ostracized man obsessed with a family curse also shows more style and creativity — though the groovy 60s/70s outfits might make that sentiment fly in the face of some viewers. Working with cinematographer Richard C. Glouner, Haller imbues this story of ancient rites, malevolent séances, supernatural beasts and the Necronomicon with a densely moody Gothic atmosphere that even makes appear as if having difficulty breathing. Following in the vibrantly colorful and animated style of Roger Corman's Poe adaptations with Vincent Price, the film is bathed in thick vivid primaries while inside the creepy Victorian home of the plot's ambiguous villain while exterior sequences are shot in idyllic earth tones. This is none too surprising since the director learned this stylized approach to horror from Corman himself when Haller worked on many of those same AIP productions and is largely responsible for their visuals and design.

Adding to the production's welcomed spooky vibes is, of course, the intensely creepy and somewhat unpleasant performance of Dean Stockwell ('Quantum Leap') as the aforementioned young man, Wilbur Whateley. Stockwell plays Wilbur as socially awkward and disturbing yet eerie charming with a soft spoken demeanor that's at once friendly and soothing while also threatening and tensely odd. It's the sort of kindly and neighborly pleasantries we'd imagine a serial killer to use when luring his next victim, making Stockwell the movie's worthwhile component. And Wilbur definitely lures his victim when he charms the pants off Sandra Dee, both literally and figuratively as she becomes integral to his goal of summoning ancient deities known as "The Old Ones." As is typical of most B-horror flicks, those in charge of saving the day — and the damsel in distress laying half naked on a stone altar — are the men of science, as portrayed rather convincingly by Ed Begley and Lloyd Bochner, making for fun spookfest. (Movie Rating: 3.5/5)

Shout! Factory brings 'Murders in the Rue Morgue / The Dunwich Horror' to Blu-ray as a double-feature single-disc release under the distributor's Scream Factory line. The Region A locked, BD50 disc containing both films is housed inside a regular blue case. At startup, the disc goes to an animated screen with music where viewers can choose between the two movies.

The source used for making this high-def transfer appears to have aged exceptionally well, showing only a few very minor and negligible vertical lines. Otherwise, the presentation is in excellent shape with outstanding resolution and clarity, revealing fine, distinct lines in the costumes and furniture. Every wrinkle and pore in the faces of actors is perceptible, and the smallest object in the distance is plain visible. There are a few forgivable, poorly resolved moments, but for the most part, the AVC MPEG-4 encode looks great and is awash in a thin layer of natural grain, giving the video an appreciable cinematic appeal. Spot-on contrast keeps everything bright and attractive while brightness levels deliver deep, rich blacks that penetrate deep into the screen, providing each frame with a nice three-dimensional quality. The color palette is vivid and radiating with richly saturated primaries, animating the 1.78:1 image with rejuvenated charm. (Video Rating: 3.5/5)

Compared to the first movie, the source has not aged quite as well, showing a few instances of minor scratches, white specks and an occasional splattering of dirt. On the other hand, looking beyond such distractions, the AVC-encoded transfer shows a good amount of clarity and definition, revealing distinct fine lines in the foliage, furniture and the tacky wallpaper of the Whateley house. Pores and wrinkles are plainly visible in the faces of actors while the fabric and stitching of clothing is often highly detailed. Taking away from this are several moments of softness and poor resolution with contrast and colors taking a nosedive, making the entire presentation appear dull and faded. At its best, contrast and brightness levels are very well-balanced with crisp, clean whites and rich, deep blacks, providing some scenes with a very pleasing depth of field. The palette can also appear striking and vibrant during these moments, which is nice since Richard C. Glouner's cinematography is quite colorful and expressive, but on the whole, the 1.78:1 image is sadly less than stellar. (Video Rating: 3/5)

The video is accompanied by an equally satisfying DTS-HD Master Audio mono soundtrack that terrifically suits the film's dreamlike quality. Most impressive is the haunting and surreal musical score of Waldo de los Rios, exhibiting a great deal fidelity and warmth while providing the film with excellent presence and depth. Dynamic range is distinct and fairly extensive, though it rarely pushes into the upper frequencies, displaying superb clarity and separation between the various noises and the mids. Sadly, there isn't any low bass to speak of, which is not entirely surprising but still somewhat disappointing. Background activity, from the footsteps of characters and the echo of voices to the occasional rustling of leaves and the funny gasps of theater patrons, is intelligible and evident, providing the onscreen action with a welcomed sense space. Vocals are well-prioritized but also a bit flat and detached for much of the movie's runtime. (Audio Rating: 3.5/5)

The incantation and chants are recited with the power of a DTS-HD MA mono soundtrack, but like the video, the ritual is ultimately a mix of good and bad. On the whole, the audio provides the film with an average sense of presence and fidelity, but largely feels limited and restrained to the center of the screen. Imaging exhibits a good amount of clarity and definition in the mid-range, yet it's not a very cleanly dynamic or extensive presentation. Several moments when the music and action pushes into the upper ranges, the lossless mix reveals instances of distortion and tends to come off a tad bright while also seeming flat and boringly uniform. A bit of bass gives the movie some pleasing weight, but it's nothing particularly noteworthy or memorable, except perhaps for the hallucinatory sex scene when tribal drums provide the sequence with rhythm. In general, vocals are intelligible and precise, but voices don't always perfectly match lip movement and appear a millisecond off. (Audio Rating: 2.5/5)

'Murders in the Rue Morgue' is not actually an adaptation of the classic detective story by Edgar Allan Poe, except in spirit only since the story is technically still a murder mystery. 'The Dunwich Horror' is, on the other hand, a direct adaptation of H.P. Lovecraft's classic occult horror tale, except more psychedelic with a creepy performance by Dean Stockwell. Both arrive on the same Blu-ray disc, featuring a strong picture quality in each and an acceptable audio presentation, though one is less satisfying than the other. Lacking any truly worthwhile supplements, the overall package is ultimately for fans and cult enthusiasts.

Sale Price 99.99
Buy Now
3rd Party 80
In Stock.
See what people are saying about this story or others
See Comments in Forum
Previous Next
Pre-Orders
Tomorrow's latest releases