In this contemporary version of the Count Dracula tale, a sophisticated and clever vampire establishes a coven in Los Angeles and terrorizes the local teenagers.

Hayes: "Yes, so much so that I almost had a massive coronary!"

Vampires have spooked and creeped people out for centuries. From the very earliest roots of the beast in Eastern European folklore to modern movies, the blood-hungry demons from the netherworld have served to be the source for some deliciously scary entertainment. Sometimes movies that aim to tackle the horror sub-genre try to mix things up a bit by making the living dead out to be broken-hearted romantics or hip and cool cats of the 70s or even hilarious buffoons who are trying to figure out how to live in an apartment together. Whichever way a filmmaker aims to take a bite out of the beasties, Vampires are a horror staple. The late 60s and early 70s saw a resurgence of the heliophobic night stalkers with the Hammer Horror films, as well as entries like 'Blacula,' and one particularly dapper looking gent by the name of Count Yorga.

When you've stalked around your native land of Bulgaria for centuries, it's understandable that you would want to stake out some new territory. You get itchy for some foreign land that allows you not only see some new sights but sink your teeth into something… or rather someone new. The gentlemanly Count Yorga (Robert Quarry) has bought a castle outside of L.A. and has started acting as a medium. He helps his clients communicate with the dead, and since he's very likely the one that planted their departed relative, this is a particularly easy task. He's even started dating a lady!

After the death of Erica Lander's mother who was dating Yorga at the time of her sudden death, Count Yorga convinced the grieving girl not to have her mother cremated and in fact buried in the ground. To help her cope with her loss, Yorga offers to perform a séance in order to help Erica reach her dearly deceased mother... in a way only Yorga can! While her friends Michael (Michael Macready), Donna (Donna Anders) and her boyfriend Paul (Michael Murphey) are a bit skeptical, Erica believes that the eccentric well-dressed Count means well. When Paul and Donna offer to drive Yorga back to his mansion, the pair got their van stuck in the mud along the Count's driveway. Deciding it's the perfect time for some necking in the back of the van, Yorga seizes the opportunity to drink a little blood and take the young woman as his bride!

As Donna starts to behave erratically, sleeping all day, staying awake all night, drinking the blood of her cat, the rest of her friends start to think something is a bit odd about that Count Yorga. When their friend Dr. James Hayes (Roger Perry) is called in to consult on Donna's case, he starts to put two and two together and suspects there is a vampire stalking Los Angeles! Unable to convince the police of his theory, Dr. Hayes is going to have to confront the mysterious Count Yorga and prove the seemingly docile recluse who keeps odd business hours is a deadly vampire! 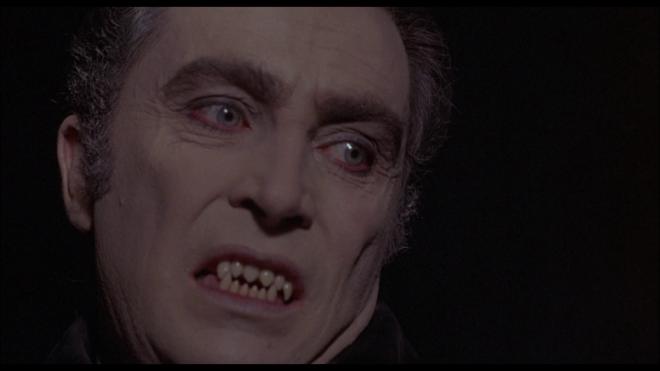 Written and Directed by Bob Kelljan, 'Count Yorga, Vampire' had a rather interesting start. Originally the film was intended to be produced as a low-budget softcore porn flick titled 'The Loves of Count Iorga,' but as the screenplay got refined and reworked, the idea to capitalize on the growing vampire trend was made and the film turned into an earnest horror picture and retitled 'Cont Yorga, Vampire.' Over the years as the kitsch value of the film has grown, the original title has been restored to the print. With lead star Robert Quarry headlining, the film became a drive in and midnight movie hit. While the movie wears its meager budget on its sleeves, the film itself actually works as a solid retelling of the traditional Dracula story, only with a more groovy and modern twist and a coy sense of humor. The film did so well that its sequel 'The Return of Count Yorga' was put into production almost immediately.

As far as genuine scares go, there really aren't all that many big ones to be had in 'Count Yorga, Vampire.' While there are a few jumps here and there and a sustained sense of dread, most of the picture works as a setup for the bigger finale where Dr. Hays and Michael raid Count Yorga's home in order to save Erica, but instead are met by Yorga's vampire brides. The rest of the movie plays more like a traditional detective story where there is a murderer in the midst of some people and they're the only ones left to prove the case when the cops are unwilling to hear their story. Then you have the big man himself, Robert Quarry as Yorga. He plays the role as a stately individual of refinement and respect, which makes him all the more lethal. His eyes have a fire in them that makes his more classical take on the vampire myth more than a bit creepy. When he looks at someone, it looks like he's either sizing them up for a romantic interlude or for his lunch. While some may be put off by the lack of urgency or the film's slow burn pacing, it's worth giving the film the time it needs to reach its final act and provide the payoff you've been so eagerly awaiting.

Now that 'Count Yorga, Vampire' has made its way to Blu-ray, we can now enjoy a true Yorga Double Feature! I grew up watching these movies on Saturday mornings edited for television. As a kid of about four or five years old, I wasn't ever scared by them and I think that's why I liked them so much. These were creepy movies that didn't scare me, but I could enjoy just the same. I'm glad to see that the same effects are true all these years later. The Yorga films are just entertaining, and along with the 'Blacula' films they prove to be the source of hours of fun.

'Count Yorga, Vampire' arrives on Blu-ray thanks to Twilight Time pressed on a Region Free BD50 disc and limited to a run of 3,000 units. The disc is housed in a standard clear case with a booklet featuring stills from the film as well as an essay by Julie Kirgo. The disc opens directly to the main menu.

For a low budget flick that's coming up on its 45th anniversary, 'Count Yorga, Vampire' looks practically flawless with this 1.85:1 1080p transfer. This film's color palette is one aspect of this transfer I found exceptionally pleasing. Primaries have the right amount of pop to them allowing for rich blues, strong yellows, and wonderfully saturated reds. The goopy blood red effects look fantastic! Fine film grain has been retained leading to some pleasing detail levels. There is some occasional softness here and there, but that appears to be an aspect of the film itself. You can appreciate all of the actors' fine facial features as well as Yorga's rather stately dress sense. Black levels are very strong here leading to some rich and inky blacks. There are a couple of moments where some scenes dip slightly into crush areas, but they're not so bad as to really knock the score for. The print used for this transfer appears to be free of any notable damage making this a very pleasing high definition presentation!

'Count Yorga, Vampire' gets the added benefit of a DTS-HD MA 1.0 audio track to ramp up the creepiness. One of the aspects of this audio mix that really struck me was the film's ambient background effects. It had been a few years since I last saw this one so I wasn't expecting the low tones and subtle wind effects and how well they round out the film's audio mix. Dialogue is crisp and clear and never a struggle to hear. The film's score by Bill Marx also maintains a wonderful presence. A number of scenes were obviously shot without any kind of synchronized sound recording equipment and rather than rely on hollow dubbing effects, the film just lets the music move the movie forward and the effect works wonderfully. Without any kind of age-related issues or hiss or dropouts, this track is in great shape.

Audio Commentary: Film Historians David Del Valle and Tim Sullivan provide ample information about the production and the legacy of the movie. It's nice to have these two working the commentary together because there is a nice back and forth between them and the track is never stale or dull.

My Dinner with Yorga: The Robert Quarry Rue Morgue Interview: (13:04) This is a reading of a magazine interview read by David Del Valle and Tim Sullivan. It's an interesting extra feature to be able to hear someone reenact an interview like this. Offers up a lot of interesting information about Quarry and the production of the movie.

Still Gallery: The MGM Archives: A collection of images featuring production stills as well as a gallery of posters. I'd love to locate an original!

Still Gallery: The Tim Sullivan Archives: Tim Sullivan shares his collection of personal photos as well as the article he wrote about Robert Quarry. It's an endearing set of pictures, especially the photo of the number of gifts Robert received from fans while he was in the hospital.

Original Theatrical Trailer: (HD 0:59) I love classic trailers like this they really knew how to sell movies to a specific audience back then. It's not designed to attract everyone and that's what makes it awesome!

'Count Yorga, Vampire' is one of those movies that isn't necessarily all that scary, but it's an earnest horror movie that knows how to maintain a sense of dread and foreboding while also taking some wicked stabs at humor. Twilight Time has done a pretty great job pulling this disc together as the film is given a pleasing HD A/V presentation that should make fans of the Yorga films more than happy to see and hear. Add in some pretty decent extra features and this Blu-ray release becomes pretty easy to call recommended.