The Return of Count Yorga

When the overlord of the damned rises again to prowl the shadows, who will stand against The Return Of Count Yorga? Robert Quarry is back as one of the most dapper vampires to ever set up shop in California in this thrilling sequel that really raises the stakes. Revived by the well-known supernatural properties of the Santa Ana winds, our undead leading man takes to the streets with an unquenchable thirst. In search of new blood, Yorga moves next door to an orphanage. But when he crosses paths with a beautiful young woman, the Count’s thoughts turn to love. Has the ruler of the night finally found the girl with whom he can share eternity?  Featuring Mariette Hartley, Roger Perry and Craig T. Nelson in his screen debut, this biting vampire flick will thrill you horror fans…Yorga-nna love this one.

"Look, if I have to hold two pieces of wood so do you!"

It's a rule of thumb in the world of commercial filmmaking, if you have a genre film - Horror, Comedy, Sci-fi - that was produced on a modest budget that did fairly well at the box office, a sequel should be put into production as fast as possible, whether or not one is needed, wanted, or even if the original story leaves any open room for a sequel. While this can be a bit irritating, the need to create franchises is why we have a dozen 'Friday The 13th' films, ten 'Halloween' films and almost as many 'Nightmare On Elm Street' films. In the 1970s, sequels were less of a guarantee but still an option. For 1970's 'Count Yorga, Vampire,' a sequel was less of a sure thing, but in 1971 we get the cheeky 'The Return Of Count Yorga' written and directed by Bob Kelljan and the results while not very scary, are a great bit of fun.

You just can't keep a bad vampire down for very long. Count Yorga (Robert Quarry) finds himself with a bit of a quandary on his hands. Returning to a small California coastal community to feed should be a pretty routine affair. Yorga has all of his vampire brides to do his bidding. The local townspeople don't believe in vampires and even if they did, the Halloween season should put any mysterious circumstances, namely two distinct neck punctures on any individual, to rest. Heck, there's even a nice little orphanage with little kids filled with blood, but the trouble for Count Yorga is the beautiful Cynthia Nelson (Mariette Hartley). She's so beautiful that Yorga's long dead heart starts to go pitter-pat once again.

Given Yorga's deadly nature and the fact that he can't go outside during daylight, he and Cynthia can hardly start tiptoeing through the tulips anytime soon. There is also the pesky matter of Cynthia's husband Bill (Walter Brooke), their family, and Cynthia's mute sister Jennifer (Yvonne Wilder). But what are these mortals to a few brides of the undead and Yorga's trusted valet Brudda (Edward Walsh)? Yorga invades their home, kidnaps and wipes away Cynthia's memory, and kills her mother and kidnaps Bill. Taking Cynthia back to his castle, the local police headed by Lt. Madden (Ruddy De Luca), Sgt. O'Connor (Craig T. Nelson), as well as Dr. David Baldwin (Roger Perry), and Reverend Westwood (Tom Toner) are left wondering what happened to the family.

With a lone orphan boy named Tommy (Phillip Frame) and Jennifer to account for Cynthia and her family's whereabouts, no one has any real idea what happened. The problem for the police is Tommy and Jennifer's conflicting stories. Tommy says the family just left while Jennifer says they were attacked by vampires and that Cynthia has been taken hostage in Yorga's castle. At first the cops only believe Tommy, but soon the evidence pushes the pendulum in the other direction and whether or not vampires actually exist, it would appear that Yorga is behind the whole mess. The only question left is can the police and Dr. Baldwin save poor Cynthia before she becomes Yorga's bride for all eternity? 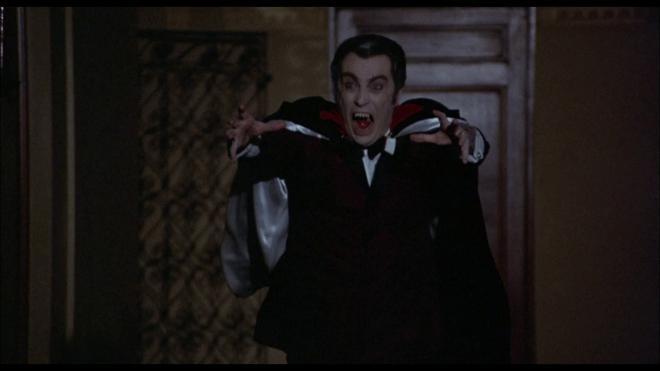 It has been years, possibly as many as 25 or more since I have seen either of the 'Yorga' movies. As a frequent sight on a local television station when I was a kid, it was a delight to reconnect with 'The Return of Count Yorga.' This movie is 100% 70s vampire horror movie kitsch. Where the Hammer Horror films of the late 60s and early 70s had the good sense to add some thick red syrupy blood to the mix, The 'Yorga' films rely on some pretty dated methods for scares. Firstly, Yorga is never really a very scary bad guy. Robert Quarry is essentially playing a dapper Count Dracula, beyond a slight origin shift, there really is very little difference between the two. The only reason I can figure for the name change must have been some sort of rights issue or the desire to shoot a vampire film in upstate California. Either way you go with trying to figure this one out, the film is a nice bit of spooky fun with a great score by Bill Marx.

'The Return of Count Yorga' is a fairly predictable vampire film. You can guess what's going to happen at pretty much every turn so there is really very little suspense or surprise save for a terrifying home invasion sequence and the rather shocking ending. To that effect, what this flick does have going for it in spades is a great sense of humor. Whether or not you want to argue that the goofiness was intentional, it does lend itself well to the movie - particularly the scenes involving Professor Rightstat (George Macready) who basically plays an elderly, senile Van Helsing who won't be of any help to our gang of heroes. Then you have the bumbling cops played by Craig T. Nelson and Rudy De Luca. These guys are basically exposition dumpsters but they have a job to do and when they try to save the day - it's a lot of fun watching them fail miserably.

'The Return of Count Yorga' is one of those movies that you could ponder the merits of a sequel to the original 'Count Yorga, Vampire' all day long, but even still, you're likely going to come to the conclusion that this flick is just fun. Not scary, just entertaining. The cast is great and they do a solid job of playing things completely straight without tipping their hat too much to the humorous side of things. It's also not too hard to see where this series of vampire movies may have paved the way for 'Blacula' and 'Scream, Blacula, Scream.' If you've yet to fire up a Yorga flick, you're in luck, both movies arrive on Blu-ray this Halloween season. While Twilight Time will do the heavy lifting for 'Count Yorga, Vampire,' Scream Factory has done a stellar job bringing 'The Return of Count Yorga' to Blu-ray. Between the 'Blacula' films already on Blu-ray and now Count Yorga rising from the standard definition grave, you've got all you need for a fun quadruple feature!

'The Return of Count Yorga' arrives on Blu-ray thanks to Scream Factory and is pressed on a single Region A locked BD25 disc. Housed in a standard case, there is reversible artwork. The disc opens directly to the features' deliciously well-animated main menu offering standard navigation options while cartoon blood flows down over the screen.

'The Return of Count Yorga' arrives on Blu-ray with a very pleasing 1.85:1 1080p image presentation. Film grain has been retained and offers up nice fine detail levels. Close-ups and establishing shots offer the best range of clarity and detail as some of the middles can look a little softer and dreamier. Colors have that bright 1970s vibrancy that push primaries, especially blues and reds to vivid peaks. Thankfully this color push does not adversely affect flesh tones as the people who should look healthy do, and those that don't look like they just woke up from the grave. Black levels are very good overall, there is some slight crush in darker scenes, and I noticed a couple of contrast blooms, but all around this image has a nice sense of three-dimensional depth to it. The print used for this transfer is in fine shape, the only noticeable damage I could see are what look like some slight barely visible stains during the opening credits, but those disappear as soon as the credits finish. A nice upgrade to Blu-ray for this title.

With a very strong English DTS-HD MA 1.0 track, 'The Return of Count Yorga' sounds wonderful. Dialogue is crisp and clear and easily heard throughout. Even as a mono track there is a nice sense of imaging as sound effects don't feel stationary and have a realistic directional effect to them. The amazing score by Bill Marx has plenty of separation from the dialogue and sound effects elements and comes through to creepy effect. Levels are rock solid as the film while creepy with a great horror score doesn't ever get too loud. Yorga is a stately sort of vampire and this track does his temperament justice. The only real volume shifts come during the big home invasion sequence and the climax, but you shouldn't have to adjust your volume for those shifts. All around a great track.

Audio Commentary: Film Historian Steve Haberman and actor Rudy De Luca provide a number of fun insights into the production of the film and it's stature in the vampire sub-genre of Horror films. Haberman does most of the talking and he's a wealth of knowledge, De Luca is fun when his character is on screen but otherwise he's relatively silent throughout most of this track.

Radio Spots: (1:36) These radio spots are a hoot as they really amp up the cheesy effects to sell the flick.

Photo Gallery: (HD 3:24) A collection of great posters and marketing materials for the film, there isn't an option to navigate them one by one as each image lasts on screen for only about 2-3 seconds. I loved seeing that this movie was part of a triple feature for a Drive-In theater alongside 'Blacula' and 'Baron Blood!'

Trailer: (HD 1:38) An awesome trailer that does a great job of selling the movie.

TV Spots: (SD 0:22) I actually remember seeing this spot as a kid when this movie would be aired on TV! Total nostalgia whiplash.

'The Return of Count Yorga' is a great piece of 1970s vampire filmmaking. As one of the few early attempts to bring vampires to contemporary times, the film itself is a bit of a mixed bag. It's slightly goofy and not too scary, but it is a great bit of fun and genre fans should be pleased to have this great Blu-ray from Scream Factory in their collections. With a strong A/V presentation and some entertaining and informative extra features, I'm calling this one recommended.

Sale Price 39.52
Buy Now
3rd Party 38.98
In Stock.
See what people are saying about this story or others
See Comments in Forum
Previous Next
Pre-Orders
Tomorrow's latest releases