Overview - Based on a 1969 Michael Caine film of the same name, thieves plan to pull of the heist of their lives by creating Los Angeles largest traffic jam ever.
OVERALL
Worth a Look 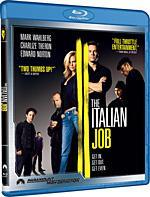 By any reasonable measure, 'The Italian Job' should not have been a very good movie. It had a few strikes against it right out of the gate, namely that it was the second remake of a famous '60s caper flick to hit screens in less two years (coming right on the heels of 2001's blockbuster 'Ocean's Eleven'), only with a slightly-less-than-A-list cast (sorry, Mark Wahlberg, you're no George Clooney), a far-from-original premise even for a heist flick and no Steven Soderbergh at the helm. Yet lo and behold, 'The Italian Job' 2003-style not only turned out to be a pretty darn good movie, but showed real legs at the box office, turning into the sleeper hit of the season.

A reimagining of the 1969 Michael Caine flick of the same name, 'The Italian Job' is pretty standard-issue caper stuff. Donald Sutherland heads a large ensemble cast as John Bridger, master thief and father to Stella (Charlize Theron), as well as surrogate "daddy" to a group of top-notch, well-paid crooks (including Mark Wahlberg, Jason Statham, Mos Def, Seth Green and Edward Norton). But the elder Bridger wants to get out of the business, which means its time for that "one last score" that will ensure his place in thievery hall of fame. And this one will be a doozy -- stage greatest heist in history in the middle of Los Angeles' largest traffic jam, and score the biggest stash of diamonds ever. Needless to say, not everything will go according to plan...

Though 'The Italian Job' was a big hit, it is still regarded as somewhat of an 'Ocean's Eleven'-lite. The comparison is indeed apt. Coming after that highly-entertaining, very audacious Soderbergh flick, 'The Italian Job' does feel a bit like an imitation. It is not quite as smooth and slick, the cast not as arresting and the plot more straightforward. But even if I agree that the Soderbergh flicks are superior, what makes 'The Italian Job' so much fun is its lack of pretension. It wants to be a great Saturday afternoon popcorn flick -- nothing more, nothing less -- and on that level it succeeds admirably.

As with any caper movie, 'The Italian Job' is only as good as the chemistry of its cast. Wahlberg and Theron look great together, Norton is always a master at duplicitous charm, and Green, Statham and Def are great tag-alongs. The plot also crackles along at a brisk pace, with the numerous turnabouts and double-crosses neither too obvious nor too obtuse. Sure, nothing in 'The Italian Job' really surprises, but then it doesn't need to -- we like this impossibly good-looking band of thieves, and it is no surprise in movies like this that crime never fails to pay. If the film does make any wrong move, it is that it sometimes tries too hard to "mean something" -- the Sutherland father figure character gets a bit sappy and sentimental with his Mr. Brady-like morality lessons, when all we want is another cool car chase. But for the majority of its 111-minute running time, 'The Italian Job' delivers nothing less than perfect Hollywood entertainment. 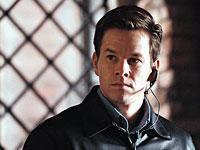 Presented in 2.40:1 widescreen and 1080p/MPEG-2 video, 'The Italian Job' falls somewhere in the middle run of Paramount's initial wave of Blu-ray releases. Most aspects of this transfer are really quite good, but I wasn't as knocked out by the "wow factor" as, say, 'Aeon Flux' or 'Sahara,' though 'The Italian Job' is certainly better-looking that 'Lara Croft: Tomb Raider' or 'Sky Captain and the World of Tomorrow.'

There are certainly main positives to the transfer. The source material is in fine shape -- this is a very clean, modern-looking movie -- and great blacks and generally strong contrast. The majority of the film looks quite sharp, with a nice sense of depth and sometimes eye-popping shots that look very three-dimensional. Colors, too, are cleanly reproduced and vibrant, especially the blues and rich orange fleshtones. However, some sequences in the film were shot with an overcast look, which is likely intentional but sometimes results in portions of the transfer looking a bit soft and drab by comparison.

However, as I lamented in my review of the HD DVD version of the film, I was distracted by some slight but noticeable edge enhancement. Granted, halos and jaggies are not very prominent most of the time, but I did notice them on occasion and it was irritating. The image also looks just a hair softer on Blu-ray than the HD DVD, but also ever-so-slightly less grainy. I'd call it a wash. In the end, 'The Italian Job' is a perfectly-fine looking disc, sometimes even superb, though maybe not the absolute best Paramount has produced thus far.

Paramount gifts 'The Italian Job' with a Dolby Digital 5.1 surround track encoded at 640kbps, though unfortunately the film suffers from surprisingly average sound design. I'd say that this track on par with its Dolby Digital-Plus cousin on the HD DVD version, but that's not a huge compliment as the mix is rather lacking in excitement. (Note: Though the back of the Blu-ray box says there is a DTS 5.1 surround track included, it doesn't seem to be on the disc, at least that I could find.)

On a purely technical level, the track delivers. Nice dynamic range, with the film's very polished sound (snappy score, robust effects, excellent dialogue reproduction) coming across very clean and smooth. However, the mix is not that enveloping, and when it is, rear effects are sporadic. The chase scenes of course get all the razzle-dazzle -- there are a few noticeable instances of discrete sounds panning from side to side and front to back, and a bit of ambient dialogue (such as crowd noise) audible. But that's about it. The quieter scenes lack any genuine sense of atmosphere, and there is little creativity to the sonic goings-on. Certainly, this is a perfectly respectable mix, but I expected a bit more of a "wow factor" with this one. 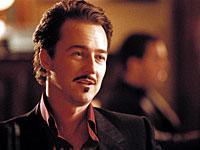 Like the transfer and soundtrack, the extras Paramount has ported over from the DVD release are pretty standard. Not bad mind you, just pedestrian.

Since there is no commentary included, it is up to the suite of six featurettes to take up the slack. Unfortunately, they are all culled from the "Everybody loved everybody!" school of studio EPKs; plus, sextet also runs less than 45 minutes total, which hardly gives room for much of substance. "'The Italian Job' -- Driving School" (5 minutes), "The Mighty Minis of 'The Italian Job'" (5 minutes) and "High Octane: Stunts from 'The Italian Job'" (8 minutes) are the best of the bunch. All the car chases in the film are actually pretty cool, and aren't those little Mini-Coopers cute? Alas, the garden-variety EPK "Pedal to the Metal: The Making of 'The Italian Job'" is all back-patting on-set interviews, while "Putting the Words on the Page for 'The Italian Job'" profiles the husband and wife writing team of Wayne and Donna Powers, but it goes on too long. Quite frankly, these are once-watch pieces of fluff that you can probably skip and not feel like your life is somehow incomplete.

Up next is eight minutes of Deleted Scenes. Unfortunately, not only is the quality dodgy (all are culled from a rough workprint), but the scenes themselves are not very interesting. Wisely cut was an extended bit between Charlie and Stella doing the flirt-cute at a bar, and some too-obvious comedy slapstick during the climax. No great shakes.

Rounding out the set is the film's theatrical trailer, presented in 2.40:1 widescreen and full 1080p video.

'The Italian Job' is definitely one of the better remakes Hollywood has churned out lately. Though I didn't enjoy the film quite as much as the similar 'Ocean's Eleven' flicks, it is a great deal of fun and never anything less than totally entertaining. However, like Paramount's previous HD DVD release of the film, this Blu-ray version is a good but not superior effort by the studio. The transfer looks nice, but combined with just a decent soundtrack and fairly middling extras, it hardly raises the bar. Still, this is worth checking out just because it's such an enjoyable flick.

Sale Price 7.99
Buy Now
3rd Party 19.99
In Stock.
See what people are saying about this story or others
See Comments in Forum
Previous Next
Pre-Orders
Tomorrow's latest releases