he comic misadventures of the beleaguered Griswold family continue in this latest 'Vacation' outing, the third and most successful of the series. (Over $71,000,000!) This time America's most dedicated dad (Chevy Chase) is determined to stay at home to create "the most fun-filled old fashioned family Christmas ever" -- but life has a particular way of throwing wet logs on Clark Griswold's fire. Look for Emmy and Golden Globe-winner Julia Louis-Dreyfus (TV's 'Seinfeld') in a supporting role. Written by John Hughes ('Home Alone' series).

Ah, the Griswolds. Their lamest moments aside, you can't help but miss them. The first 'National Lampoon's Vacation' movie created such a legacy for itself that it has truly become an iconic slice of American pop culture. Even though none of the entries in the franchise were genuine blockbusters, it seems like there is no one on the planet who hasn't seen a 'Vacation' flick. And we all have our favorites. But 'Christmas Vacation' remains particularly beloved by many, not only because it breaks with series tradition and sees the Griswolds not take an actual vacation, but it also gives the filmmakers their best target in the entire franchise: the family holiday spent at home.

Since Clark (Chevy Chase) and company (including a returning Beverly D'Angelo and new kids Juliette Lewis and Johnny Galecki) have no destination,  there is far less story this time around. More a string of gags than a full-fledged plot, Clark gets in over his head trying to bring the spirit of Christmas to the Griswold home — and that's about it. The fact that Clark's Christmas bonus is late arriving doesn't help to lift spirits, nor does a last-minute visit by the in-laws (John Randolph, Diane Ladd, E.G. Marshall and Doris Roberts), a pair of obnoxious yuppies next door (Nicholas Guest and Julia Louis-Dreyfus), and a return pit stop for Cousin Eddie (Randy Quaid). Needless to say, much dysfunction follows, including Clark's inevitable pratfalls, an overabundance of Christmas lights, one nervous breakdown, a string of vulgarities from Eddie and, perhaps a few heartwarming life lessons along the way.

'National Lampoon's Christmas Vacation' was written by John Hughes, and the film's haphazard tone, structure, and humor have his name written all over it. I once read an interview with the late auteur where he admitted that he always hated rewriting scripts and rarely, if ever, did so. Watching 'Christmas Vacation' again, I don't doubt that statement. Make no mistake, though, much of the film is funny — hysterical, even. But there is just as much that doesn't work, and a bit more work on the screenplay could have made 'Christmas Vacation' truly brilliant. 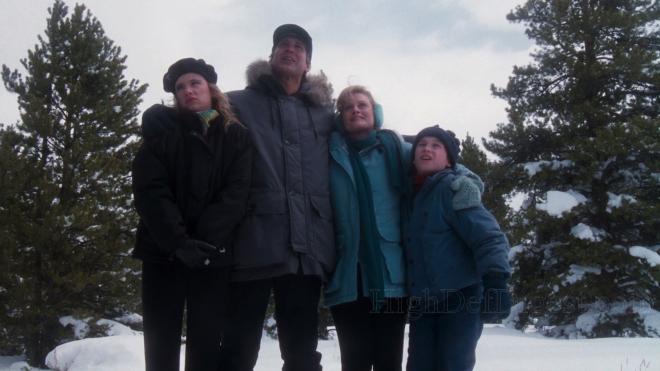 Still, the classic sequences are many, especially in the largely hilarious first half. I especially liked Clark getting the family car (complete with oversized tree) stuck under a moving truck; the unfolding of a monster Christmas tree that is sure to tumble; Clark's overzealous attempts to out-Christmas light the neighborhood with 25,000 imported bulbs; and even an appearance by Jason Voorhees, complete with hockey mask and chainsaw. It is also impressive how Chase and D'Angelo managed to sustain a believable and endearing chemistry after four flicks together. They really make these movies work — without them, 'Christmas Vacation' would have no heart at all (especially D'Angelo, who despite a truly thankless role was always able to make Chase's lunacy ten times funnier with a simple eye-roll and a frown).

However, Hughes and director Jeremiah Chechik -- perhaps responding to commercial concerns — can't resist adding a sentimental spin. Borrowing heavily from Hughes' own 'Planes, Trains & Automobiles,' which came out two years earlier, and predating his 'Home Alone' (1990), the heartwarming climactic bits feel a bit forced and false. I was also surprised how vulgar the humor can get — a little Cousin Eddie goes a long way for me — though I have to remind myself that the first 'Vacation' was rated R, so to be fair the crude gags are in keeping with the series' roots. I also wished the in-laws had been a bit more funny, and that both Galecki and Lewis had been given something to do other than merely reacting wide-eyed to Clark's every quip. Still, while 'Christmas Vacation' will never beat the first film for me, it is far preferable to both 'European Vacation' and (heaven help us) 'Vegas Vacation.' And while personally I'll forever be firing up 'A Christmas Story' at the holidays instead of 'Christmas Vacation,' I can't deny that this is one return visit with the Griswolds well worth taking.

Warner Home Video celebrates 25 years of 'National Lampoon's Christmas Vacation' as a two-disc package with a code for an UltraViolet Digital Copy. The second disc is a Special Edition DVD-5 copy sitting comfortably underneath a Region Free, BD50 disc housed inside a collectible and very attractive steelbook package. At startup, viewers are taken to a static menu screen showing the same picture as the cover art with the usual options along the bottom and music in the background.

This is the nth iteration of the Christmas classic on home video, and with each version, the picture has unfortunately disappointed due to Warner using the same outdated DVD master. Thankfully, this time around, the Griswolds celebrate a "good old-fashioned family Christmas" the way Clark always dreamed of. It's not a significant upgrade, but it's an improvement nonetheless, showing better clarity and resolution.

Newly remastered from the original elements, the AVC-encoded transfer arrives with great balance in the contrast and clean, crisp white throughout. Although it doesn't offer a good deal of depth, black levels are strong and true with excellent shadow delineation in nighttime exterior scenes. Colors are bright and flamboyant with primaries looking particularly animated, adding to the joyous, comedic spirit of the film.

Presented in a 1.78:1 aspect ratio, the presentation is not quite as detailed and sharp as fans would have hoped for, but there's still plenty to admire. From the clothing and furniture to Eddie's sickeningly rusty RV and the individual needles of the oversized tree, definition is appreciable and background information is plainly visible, or at least as best as could be hoped for based on the condition of the source and the production's original photography. Facial complexions appear healthy and can fairly revealing during close-ups. Overall, this is the best the movie has ever looked.

Right from the start, the DTS-HD MA stereo soundtrack occupies the entire front soundstage with appreciable expansiveness and a very wide sense of space. With excellent fidelity and superb detailed clarity in the upper ranges, Mavis Staples's song is energetic and terrifically dynamic, generating a broad wall of sound that'll immediately draw viewers into the comedy's festive, upbeat feel. Atmospherics are delivered with effective directionality across the whole screen while channel separation remains well-balanced with notable panning from one side of the room to the other. Low-frequency effects are most surprising, providing an outstanding palpable feel to the music and song selection while giving the few bits of action some tangible weight, whether it's coming from Clark's chainsaw or Louis-Dreyfus's Margo punching her husband in the jaw. Amid all the slapstick mayhem and holiday wackiness, vocals remain distinct and precise in the center from beginning to end.

As an added bonus, the lossless mix, which I assume was made from the film's original Dolby Surround elements, lends itself splendidly to the receiver's DSU and Pro Logic II sound processing, convincingly extending many of those discrete ambient effects mentioned above into the surrounds for an awesomely satisfying soundfield and the best the movie had ever sounded.

Over the years, 'National Lampoon's Christmas Vacation' has amassed a strong following to become a modern holiday classic and a traditional watch for the whole family. Although many jokes can be hit-or-miss, I quite enjoy the holiday feel-good comedy and revisit it every year to ring in the Christmas cheer. Celebrating its 25th Anniversary, the new steelbook Blu-ray package features an improved audio and video presentation that will surely please fans everywhere, particularly the brand new lossless mix. Worth a look.

Sale Price 40.59
Buy Now
3rd Party 40
In Stock.
See what people are saying about this story or others
See Comments in Forum
Previous Next
Pre-Orders
Tomorrow's latest releases