Overview - A Christmas Story, a nostalgic view of Christmastime in Indiana during the 1940s, stars Peter Billingsley as Ralphie, a nine-year-old who has only one thing on his Christmas list: a Red Ryder Carbine-Action 200-Shot Air Rifle. With his parents unwilling to buy him the gun because he might “shoot his eye out,” Ralphie decides to mount a full-scale, hint-dropping, Santa-begging campaign. He also endures a slew of calamities from snowsuit paralysis to the dreaded tongue-on-a-frozen-flagpole gambit. The New York Times calls A Christmas Story, “maybe the best Christmas movie ever.”
OVERALL
Worth a Look 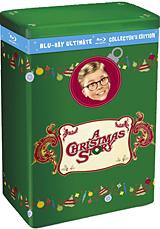 If ever a movie was rescued by home video, it is 'A Christmas Story.' Director Bob Clark's charming if unassuming adaptation of Jean Shepherd's holiday memoir, "In God We Trust, All Others Pay Cash,' was a box office bust when first released in 1983 -- with no big stars, a lack of studio support, and few critics rushing to its defense, it sank without a trace, and might have been destined for the dustbin of holiday movies (right next to 'Surviving Christmas') were it not for home video and cable. Thanks to a long shelf life at Blockbuster and incessant airings on TNT (and I do mean incessant -- they still show it 'round the clock every Christmas), the film has been reborn as a new perennial classic. In fact, I would say it has become so beloved that it ranks up there with 'It's a Wonderful Life' and 'Miracle on 34th Street' in its enduring popularity and appeal.

The plot is likely already familiar to you. In 1940s Indiana, nine-year-old Ralphie (Peter Billingsley) dreams of his ideal Christmas gift -- a genuine Red Ryder 200-shot Corbine Action Air Rifle. But when his gruff dad (Darren McGavin) and overprotective mom (Melinda Dillion) regularly respond with the now-classic dismissal, "You'll shoot your eye out!", Ralphie mounts a full-scale, hint-dropping, Santa-begging campaign to secure the ultimate toy. The poor kid also endures a slew of calamities, from snowsuit paralysis, to the yellow-eyed "Scotty Farkus affair," to the dreaded tongue-on-a-frozen-flagpole gambit every kid has tried at recess. Will Ralphie finally win over his parents and score his beloved Red Ryder? The answer may not be as obvious as you think.

I have no idea why 'A Christmas Story' was not a bigger hit in 1983. Perhaps holiday movies just weren't in vogue at the time, or perhaps the advertising campaign was terrible. But whatever the reason, it only makes 'A Christmas Story' that much easier to cherish. The film really isn't that fantastic -- its tone is rather heavy-handed, and visually it's kinda dull -- but like Ralphie, it's such an underdog and so darn lovable you just can't help but embrace it.

You also can't argue with its now-infamous sequences. How can you forget Ralphie saying the F-word and getting his mouth washed out with soap? Or his trip to see Santa, which turns into a scene as nightmarish as anything in a David Lynch movie? Or my favorite, the "leg lamp" scene, which anyone who has ever watched their parents fight over an unwanted home furnishing will instantly recognize. And "You'll shoot your eye out, kid!" has become more than just a catchphrase. It's a retort every parent has memorized -- it's all you gotta say to that whiny little brat that wants his own version of a Red Ryder to shut him right up. No words, not even "Santa knows who's been naughty and who's been nice," can compete.

The only problem with such familiarity is that I have to wonder if there remains as much of a demand for 'A Christmas Story' on video, let alone high-def. Quite frankly, you can see the film ad nauseam on TV for free, and it is far from a visually spectacular epic tailor-made for home theater. But once again, I gotta root for the underdog. I hope 'A Christmas Story' is a big hit on Blu-ray, because really, can a house be a home without a copy? 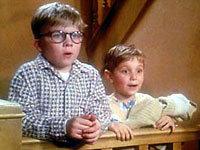 'A Christmas Story' hits Blu-ray for the second time in this 'Ultimate Collector's Edition.' It reuses the same 1080p/VC-1 encode (1.85:1) as the previous Blu-ray and HD DVD editions. Unfortunately, while not a terrible transfer I was hoping for more. The master clearly suffers from age-related defects, and while it's still preferable to the numerous, mostly atrocious home video versions that have come before, it's hardly a revelation.

Though 'A Christmas Story' was released in 1983, it looks like it could have been made in the '70s. Shot through what looks like gauze, the film has a misty, water-colored memory appearance. The print looks rather soft, grainy and occasionally dirty -- there is even a scratch mark or two noticeable. Colors are fairly well saturated, however, and reds in particular are clearly deeper than the standard-def version. Unfortunately, fleshtones are also wonky, with everyone looking a bit too red-faced.

The transfer also lacks depth. Though more impressive than other Warner catalog efforts of the same era (like the awful 'National Lampoon's Christmas Vacation'), 'A Christmas Story' is still far from the kind of three-dimensional, wondrous image one associates with high-def. I also noticed some compression noise in solid patches of color. Still, taking the source material into consideration, this Blu-ray version is pretty good.

Rare for a Blu-ray release (or a next-gen release in general), 'A Christmas Story' is presented in Dolby Digital 1.0 mono only, just as before. Granted, this ain't 'The Dark Knight,' but still... it would have been nice to at least get a stereo remix. As such, the quality here is what you'd expect, and won't surprise anyone whose seen one of the airings of the film on TNT.

The best I can say about this mix is that it is at least clean and clear. Dynamics are mediocre, though. High end is tinny and flat -- I frequently found my ears pierced by shrillness, especially during that scene when Santa kicks Ralphie down the slide and all the kids are crying and screaming. Ouch. Bass response is anemic at best. Still, dialogue is usually intelligible, so this is at least listenable. Not too much more one can say about a mono track. 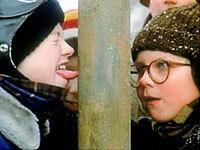 For years, a new version of 'A Christmas Story' was released nearly every Christmas, all pan and scan disasters. Finally, back in 2004, Warner gave fans what they wanted and released a two-disc DVD widescreen version. Though not overflowing with extras, there was enough good stuff to justify the "Special Edition" label. All of those extras were ported over to the previous Blu-ray release, and re-used again for this 'Ultimate Collector's Edition.'

So, what's new here? In short, nothing -- only the packaging has been upgraded to a big green monster of a cookie tin. Inside, you'll find a "Holiday Starter Kit", which boasts a Leg Lamp stand, cookie cutters, a 48-page holiday cookbook and a chef's apron. As for the disc's contents, they are exactly the same. Sadly, some of the previously-announced new extras for this set, including "Triple Dog Dare" interactive trivia and a "Decoder Match Challenge" interactive game, are nowhere to be found.

All video materials are presented in 480i/MPEG-2 video only, and I could access no subtitle options.

'A Christmas Story' will forever play on TNT, around the clock ad nauseam, and not even driving a rusty meat hook through the cranium of Peter Billingsley will stop it. If you want to own the film in high-def so you can relive the experience year 'round. You could do worse than this Blu-ray version. Sure, the transfer is a bit shopworn and the mono track is plain, but it kind of adds to the nostalgia. And there are some fun extras. too. Unfortunately, this new 'Ultimate Collector's Edition' really adds nothing to the equation aside from an oversized tin with a cookbook and a chef's apron. It's cute, but if you own the previous Blu-ray, there's really no need to pick up 'A Christmas Story' again.

Sale Price 34.95
List Price 49.99
Buy Now
3rd Party 79.99
In Stock.
See what people are saying about this story or others
See Comments in Forum
Previous Next
Pre-Orders
Tomorrow's latest releases