The world of spies and international espionage is a fertile landscape, ripe with prime action-adventure-thriller material to be harvested. Heck, at its core, it's the basis for 24 James Bond adventures (and counting), not to mention countless classics like '3 Days of the Condor,' 'Black Sunday,' 'The Manchurian Candidate,' and even 'The French Connection' to a certain degree. These are movies that paint small stories over large international canvases and the audience is made to feel that the fate of the free world hangs in the balance. When these movies work, they're cinematic gold. When they fail to light up the screen, they're a smoldering mess of potential. 1973's 'Scorpio' starring Burt Lancaster and Alain Delon and directed by Michael Winner is an espionage thriller that hits all the right high notes, but a few missteps keep it from becoming a true classic.

It's all a game. The life of a spy, whether for Russia or the United States, it's all a game. A battle of wits and wills where kings are sacrificed so that the pawns can survive to crown a new king. Cross (Burt Lancaster) is a seasoned veteran of this metaphorical chess match that plays across the world's stage. He's been in business as an assassin and handler for the C.I.A. since before the end of World War II, and as he would tell you to your face, business is good. As he's entering the winter of his career, he's seen to training a protege Jean Laurier (Alain Delon), a brilliant assassin who has a fondness for stray cats with the designation "Scorpio." Cross knows the game and spends his time imparting some smart words of wisdom and strategy to young Scorpio. As with any game, Cross knows you can only keep an ally so close.

When Cross' boss McLeod (John Colicos) orders Cross dead, the once great CIA operative finds himself on the run in Vienna with the only friend he can trust being his Russian mirror operative and friend Zharkov (Paul Scofield). They may be on opposite sides of a silent war, but Cross and Zharkov have a relationship that dates back to before there were sides, when the two men have a mutual respect. While Cross desperately tries to call in as many favors as he can and ensure that his wife Sarah can get out of the United States, the C.I.A. puts Scorpio onto cross' trail. The once freelance assassin is promised the opportunity to come in out of the cold and become an official operative for the agency. With no real allegiance to Cross, Scorpio starts to see a pattern of deception and betrayal within the C.I.A. as well as with his former mentor.

As the international net closes around Cross, it becomes imperative that he take drastic action in order to ensure his survival, as well as his wife's freedom. With fewer friends and a rising number of enemies, Cross will have to turn to his once trusted protege for help. But can Scorpio trust Cross since there is strong evidence that the man is a traitor? Likewise, can Cross trust Scorpio now that he's a part of the very agency that want's him dead at any cost? 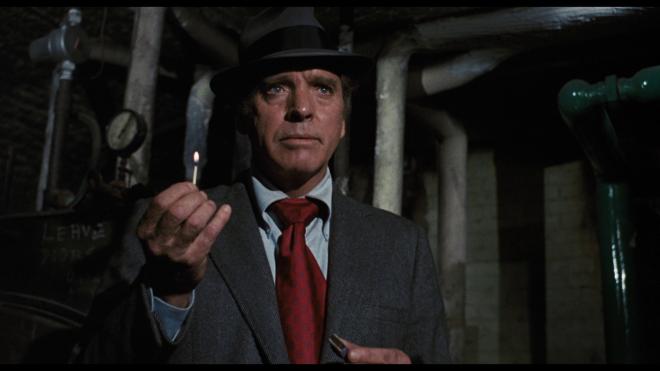 'Scorpio' is a slick, smart film that knows how to press all of the right buttons to craft itself as a classic spy thriller. You have all of the best elements of trust and betrayal and doubt playing interchangeably against one another. In one moment, you're certain Cross is a good guy and Scorpio is a turncoat and Cross' boss is a corrupt operative within the government. Then the very next scene can take those notions and character assessments and flip them on their head. Then the movie can take the plot and story and crack it like an egg, whisk up the contents, and make you believe something else entirely. It's a brilliantly constructed film that unfortunately limps to an ending. Just when sparks are about to fly, just when the powder keg whose fuse has been lit for the last two hours is about to explode, the whole thing kind of fizzles out.

As I see it the major flaw with 'Scorpio' is that it decides too late to be a movie with a message about the trivial nature of the characters' central occupation. Throughout the film there are little moments that suggest the roles that Cross and Scorpio play are futile and that someday in some fashion, whether by a sudden unfortunate death, or old age, they will be replaced. There is actually a wonderful sequence where Cross and Zharkov get drunk and muse about these ideas while debating whether or not to open another bottle of wine. Those smaller moments are enough and feel natural, however, as the film closes in for the home stretch, it makes a headlong sprint into one last meandering conversation for a finale. If you take into account the political climate of the time, the U.S./Russia arms race, the close of the Viet Nam conflict, along with Richard Nixon fall from grace, it's easy to subscribe to the film's nihilistic political world views. However, 40 years removed, these themes feel a bit dated and hinder the final product.

That isn't to say that 'Scorpio' isn't worth the watch, not in the least bit. 'Scorpio' is a strong thriller with some fantastic action sequences, and some truly great performances from its central cast. At that heart of the film is Burt Lancaster who has long stood as one of my favorite actors of any generation. There is a casual earnestness that the man was able to bring to every role whether he was playing a trainman hauling a load of stolen art in 'The Train,' a dynamite expert in 'The Professionals,' or a calm gentlemanly country doctor in 'Field of Dreams.' Lancaster was one of those rare actors who was somehow able to fill every role with himself and yet still feel like he was presenting a unique character. Opposite of Lancaster as Cross is a very fine Alain Delon as the titular Scorpio. Delon does a great job playing a man who spent his life looking from the outside in, but once he's inside, he sees the true nightmare of the world he's subscribed himself to. As a side character, but still a great watch is Paul Scofield as Zharkov. Scofield and Lancaster have a wonderful chemistry together and it's easy to believe these two men were great friends off-screen as well as on. It's also nice to see them share some more screen time together after having faced off against each other in a battle of wits in 'The Train.'

Taken as a sum of all its parts, 'Scorpio' is a good film. It may not be a great film, nor can it quite be called a classic in the traditional sense of the word, but it is a movie that delivers the goods. While it may have an ambitious subtext that is perhaps a bit too weighty for the base of this story to hold up, the film itself provides plenty of thrills and excitement. If you're a fan of movies like 'The Parallax View,' 'Marathon Man,' or '3 Days of the Condor,' you should find plenty of value with a viewing of 'Scorpio.' The action hits, the performances are spot-on, and the story - while maybe a little convoluted - is strong and captivating.

'Scorpio' arrives on Blu-ray thanks to Twilight Time and is limited to a release of 3000 copies. Pressed onto a BD50 disc, the disc is housed in a standard clear Blu-ray case and comes with a booklet featuring photos, stills from the film and a fantastic essay by Julie Kirgo.

Presented in 1.85:1 1080p, the picture quality for 'Scorpio' is pretty darn fantastic for a back catalog title of this vintage. Shot in an almost cinéma vérité style, the film has a fluidity to it where little of the film looks staged but instead shot on the fly. This is especially true as the film travels from Virginia to Paris to Vienna to Washington D.C. and other locations. To that effect, fine film grain has been retained throughout creating pleasing detail levels that allow you to appreciate the film's impressive production design. There doesn't appear to have been any kind of noise reduction employed, but there were a couple scenes that appeared a tad crunchy with a bit of haloing indicating some slight edge enhancement. It's not a terrible effect, but it's noticeable if you're looking for it. Colors are bright and have that 70s style pop to them where blues are pushed a tad deeper than natural and reds appear a bit bright. Flesh tones appear accurate if perhaps a little pink in some places. Black levels are very strong creating an image with a notable sense of three-dimensional depth with only some slight crush instances in a couple of scenes. All around for a film that's closing in on 44 years of age, this is a pretty great looking transfer for this Blu-ray release.

'Scorpio' makes its Blu-ray debut with a superb English DTS-HD MA 1.0 audio mix. While only being a mono track, this mix offers up plenty of life and presence, enough so as to pass as a stereo track at the very least. Dialog is crisp and clean and never an issue to hear. One of the things I love about early era 70s films is when a conversation can all of a sudden sound like a dubbed in voice over narration. It sounds unnatural and yet fits the film and the effect is on full display with this track. Imaging is a bit restrained given its mono nature, but this track does offer up a pleasing sense of dimensionality - especially during the film's big chase sequence where Cross is being shot at while running on some scaffolding. The elements have plenty of room to breathe and exist in their own space, and the Jerry Fielding score is absolute dynamite. All around this is a darn impressive audio mix that is free of any notable age-related issues.

Audio Commentary: Film Historians Nick Redman, Lem Dobbs, and Julie Kirgo are a great trio to have on a commentary track. Sure, it's not quite as good as having someone associated with the film on the track, but these three individuals offer a fountain of production knowledge, historical context, as well as analytical examination to make the track a worthwhile listen.

Theatrical Trailer: (HD 2:23) This is a pretty awesome little trailer that treats the audience like a CIA agent. A little goofy, but the "slide show" act works to get you into the movie.

'Scorpio' may not be the perfect spy thriller that it very easily could have been, but it does deliver the entertainment goods. Lancaster provides another solid performance on his resume and Alain Delon is fantastic as a fresh-faced killer for hire who finds himself at odds with his chosen profession. Twilight Time nails the AV presentation for this Blu-ray release offering a crisp and clear picture with a strong audio track to match. The extra features are a bit skimpy but the isolated score track featuring the great work of Jerry Fielding makes up for it. Fans should consider a purchase, and those new to the film should consider this Blu-ray release of 'Scorpio' recommended.