Woody Allen reinvents himself again with the epic historical satire that is a "wonderfully funny and eclectic distillation of the Russian literary soul" (New York Magazine). One of his most visual, philosophical and elaborately conceived films, Love and Death "demonstrates again that [Allen] is an authentic comedy genius" (Cosmopolitan). Cowardly scholar Boris Grushenko (Allen) has the hots for the beautiful Sonja (Diane Keaton), but cold feet for the Napoleonic Wars. Devastated by news of Sonja's plans to wed a foul-smelling herring merchant, Boris enlists in the armyonly to return home a penniless hero! Finally agreeing to marry him, Sonja settles down with poor Boris, to a rich life of philosophy, celibacy and meals of snow. But when the French troops invade Russia and Sonja hatches a zany scheme to assassinate Napoleon, Boris learnsin a hilariousbut fatal coup attemptthat God is an underachiever, there are no girls in the afterlife and thatthe angel of death can't be trusted!

A hopeless romantic and helpless neurotic, Woody Allen never shrinks from lampooning his personal frailties and idiosyncrasies on screen. In a variety of guises, the autobiographical Allen character shows up somewhere in almost all his screenplays, pontificating on the vagaries of the human condition, ruminating on relationships, and whining ever so charmingly about an array of quirky fears, ailments, and hang-ups. Often the haranguing transpires on the streets of New York, but in 'Love and Death' Allen turns up in Napoleonic Russia, of all places, where he pedantically peddles his perspective on a variety of topics. Though it's not surprising he would title a film after two of his favorite obsessions, Allen ups the comic ante by setting his tale in an antiquated culture and infusing modern jargon and contemporary sensibilities into the script so it reflects his zany spirit and progressive attitudes. Watching Allen scamper about and stumble through Mother Russia with his tongue firmly in cheek and alongside his wryly sardonic sidekick Diane Keaton makes 'Love and Death' a delightful - and delightfully different - romp that occupies a unique spot in the writer-director's film canon. Some of the humor may seem a bit forced and some jokes and schtick fall flat, but this 1975 comedy that brutally spoofs 19th century Russian literature and society brandishes enough brilliance and originality to make us ultimately forgive its faults.

On the morning of his execution, Boris Grushenko (Allen) affably reflects on his life and relationships as he calmly awaits the firing squad. Inquisitive, nerdy, and hopelessly uncoordinated, Boris grows up in an eccentric peasant family and unrequitedly pines for his cousin Sonja (Keaton), a free-spirited pseudo-intellectual who lusts after Boris’s burly brother Ivan (Henry Czarniak). When Ivan marries someone else, Sonja (who describes herself as “half saint, half whore”) impulsively accepts the proposal of a much older herring dealer, only to cheat on him with a variety of lovers. Meanwhile, Boris, a self-professed pacifist and coward, is forced to go off to war when Napoleon’s forces invade Austria. He becomes an accidental hero on the battlefield, briefly romances a countess, fights a duel, and re-encounters Sonja, who comes up with the cockamamy idea of assassinating Napoleon. All the while, Boris expresses his thoughts on mortality, sex, morality, war, and anything else that pops into his head.

I must admit I'm not particularly well-versed in Russian novels or cinema. I've read some Tolstoy and Chekhov and seen films by Sergei Eisenstein, but I'm no expert. And though it's not necessary to be one to enjoy the movie, it certainly helps. Allen deftly litters his script with allusions to Dostoyevsky and Tolstoy, and sends up the Russian society and philosophical dilemmas depicted in their works. He also both pays homage to and parodies his filmmaking idol, Ingmar Bergman, slips in a comedic reference to T.S. Eliot, and honors the Russian silent classic ‘Battleship Potemkin.’ Allen’s love of literature and movies permeates most of his work, but more so here than in other pictures. Though most of the jokes stand on their own, once you’re aware of the references behind them, they become even funnier and spark a deeper appreciation of Allen’s facile and creative brain.

Despite addressing meaningful, relevant topics, ‘Love and Death’ never takes itself seriously for an instant, and it’s that dichotomy that enhances the film’s humor. The irreverent one-liners just keep coming and the banter is often inspired. “You’re the greatest lover I’ve ever had,” the countess tells Boris. “Well, I practice a lot when I’m alone,” he smugly retorts. Brisk pacing and goofy antics keep us engaged, but ’Love and Death’ - especially during its farcical last act - occasionally resembles a clever ‘SNL’ skit that overstays its welcome. The whole business of trying to murder Napoleon goes a bit too far and seems almost like padding, as if Allen inserted it because he needed more material to flesh out a feature-length film. Though there’s some great stuff at the end, I always begin to tire of ‘Love and Death’ around the one-hour mark, and the final 25 minutes feels labored.

Shot on location in Hungary and Paris, ‘Love and Death’ is without question one of Allen’s most elaborate productions. (Filming was reportedly arduous - weather and health issues plagued the shoot - so it’s no wonder Allen didn’t film another movie outside the United States for more than two decades.) The battle scenes, though brief, are impressively staged, and the opulent sets and authentic costumes beautifully evoke the time period while providing a wonderful comic framework for the actors. Allen looks like a toy soldier in his military attire and Keaton’s hairstyle often recalls Princess Leia, even though it predates ‘Star Wars’ by a couple of years. ‘Love and Death’ suits their personas well, and as always, the two possess priceless chemistry. Their philosophical debate (“subjectivity is objective”) defines their steamy cerebral relationship and is one of the movie’s comedic highlights.

‘Love and Death’ marks the end of Allen’s light-hearted “early period,” yet its intelligent satire segues nicely into the more contemporary, deeper, and more personal comedies that would reap the writer-director even greater critical and popular acclaim in the years to come. (‘Annie Hall’ would be his next film.) Though not everyone will respond to this mash-up of Russian stereotypes and attitudes, it’s tough not to laugh at and with Allen, whose humor is sharp, wise, and largely timeless, and whose affection for his subject is unabashed. Somewhere Dostoyevsky is either smiling or turning over in his grave. 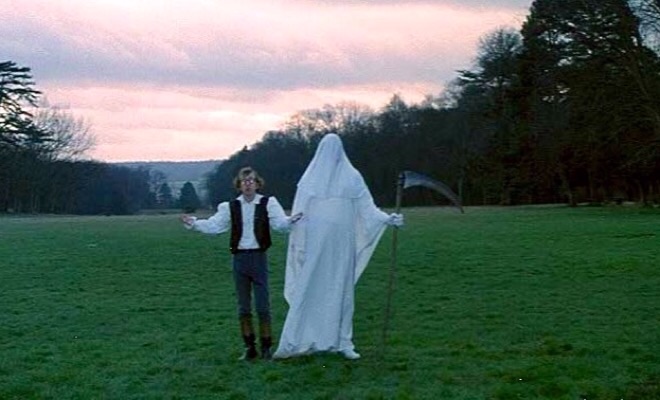 'Love and Death' arrives on Blu-ray packaged in a standard case in a limited to 3,000 edition. An eight-page booklet featuring an essay by film historian Julie Kirgo, numerous color scene stills, and a black-and-white reproduction of the film's poster art is tucked inside the front cover. Video codec is 1080p/AVC MPEG-4 and audio is DTS-HD Master Audio 1.0. Once the disc is inserted into the player, the static menu without music immediately pops up; no previews or promos precede it.

'Love and Death' is one of Woody Allen's more colorful films, and Twilight Time's 1080p/AVC MPEG-4 transfer nicely renders the lush visuals. Contrast and clarity are quite good, and light grain levels provide necessary texture while maintaining a palpable film-like feel. Hues are vivid and bold, especially reds, which add frequent splashes of vibrancy to the frame, and while there's quite a lot of white on display, from snowscapes to the flowing robes of the Grim Reaper, none of it blooms. Strong blacks add welcome weight, flesh tones always appear natural and stable, and sharp close-ups highlight fine facial details well. Unfortunately, a fair amount of errant speckling afflicts the image from beginning to end, often varying in intensity. Though far from horrific, it's noticeable and constant enough to slightly dull one's viewing pleasure, which is a shame. On the plus side, no digital anomalies or enhancements could be detected. Though the 'Love and Death' transfer doesn't rank among Allen's best, it's still a solid effort, and if fans can get past the mild print damage, they should be pleased.

The DTS-HD Master Audio 1.0 track outputs clear, well-modulated sound that's free of any age-related imperfections, such as hiss, pops, and crackles. A wide dynamic scale handles all the highs and lows without any hints of distortion, and sonic accents like gunfire, shell explosions, and goofy sound effects are crisp and distinct. Excellent fidelity and a lovely depth of tone distinguish the robust symphonic score (taken from selections by the esteemed Russian composer Sergei Prokofiev), which fills the room with ease, and Allen's clever dialogue and narration is always clear and easy to comprehend. Soundtracks for Allen films are always rather utilitarian and this one is no different, but it gets its job done without any complication, and that's a good thing.

As is the case with most Allen home video releases, almost no extras adorn the disc. Such expectation, however, doesn't diminish the disappointment.

Woody Allen's 'Love and Death' spoofs the dour, lusty world of Napoleonic Russia with plenty of the writer-director's trademark madcap humor. Neurotic and philosophical musings, all delivered with comic flair, abound, and Allen's playful salute to the cinematic style of Mother Russia (as well as his idol, Ingmar Bergman) also distinguishes the proceedings. Though many jokes still provoke hearty chuckles, some of the comedy seems dated and labored, but the performances of Allen and Keaton still shine, and their legendary chemistry and high-spirited antics help this 40-year-old film retain its charm. Twilight Time's Blu-ray release features a vibrant, but not perfect, video transfer and solid mono audio. Typical of Allen movies, almost no extras are included. Fans of Allen's early works will surely welcome this newest addition to his high-def catalogue, but if you're not a diehard Woody-phile, 'Love and Death' might not be your cup of tea. Still, this vintage comedy is definitely worth a look.