A Bullet for Joey

In Montreal, a police inspector slowly discovers a plot to kidnap a nuclear physicist, American mobsters, foreign spies, and a blonde seductress, are all involved.

The blending of genres can prove to be a great way to spice up a film. Sci-fi/Thrillers like 'The Terminator' or Horror/Comedies like 'What We Do in the Shadows' for example are movies that took attributes of one genre and infused them with another genre and created something unique and fun and the results pay off. Then you have a Gangster/Spy flick like 'A Bullet For Joey.' Directed by Lewis Allen and starring Edward G. Robinson and George Raft is a strange infusion of two genres that on paper should work beautifully, but the politics of one genre starts to outweigh the fun of the other.

For Inspector Raoul Leduc (Edward G. Robinson), there is nothing simple or convenient about murder. As an experienced police officer serving the city of Montreal, Leduc knows that a random killing of a street police officer is never a simple affair. While some are willing to see the event as a case of "wrong place wrong time," Leduc doesn't think so. Something's itching at him and he can't quite shake it. By dong a little leg work, Leduc may have found one piece of the puzzle, Dr. Carl Macklin (George Dolenz). It turns out that Macklin is a physicist working on a top secret atomic project. Could the seemingly random murder have something to do with this man?

Leduc isn't sure, but when renowned gangster Joe Victor (George Raft) is spotted on Canadian soil lurking around Montreal, the little hairs on the back of the inspector's neck stand on end. By working the case the hard way, by putting the small pieces of evidence together, by drawing the thin lines that connect the dots, Leduc may have stumbled onto a plot to kidnap Dr. Macklin. At the heart of the case is a seemingly genteel rare book salesmen by the name of Hartmann (Peter van Eyck) and a beautiful woman named Joyce (Audrey Totter) who is putting the moves on the good Doctor. Is Hartmann a simple book salesman? Is Joyce just a woman in love? Leduc will have to solve the jigsaw in front of him with the fate of the free world in his hands. 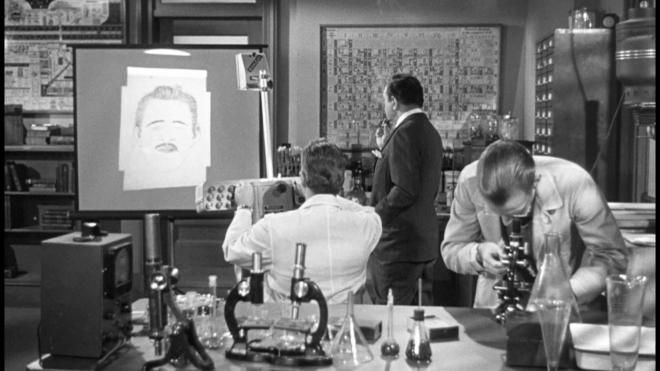 The international intrigue involving Leduc solving the case of murder that ties into the plot to kidnap a scientist is a rock solid police procedural that is thrilling and compelling. It's fun watching Edward G. Robinson put the pieces together and track down the most innocuous of leads to get to the bottom of the case. On the flip side, it's a great bit of fun to watch George Raft take a job to put together a kidnapping and make sure the job goes down the way he wants it to is also a great movie to see. It's like watching a heist film in all of the best ways. The problem for 'A Bullet For Joey' is that these two separate movies don't ever really feel like they're in the same film. Sure, some characters drift between the two movies, but there is a lack of cohesion that is sadly missed.

While 'A Bullet For Joey' may not be a rousing success and some of the third act turns feel more like conveniences than genuine story revelations, the film is still a solid piece of entertainment. As I mentioned before, Edward G. Robinson and George Raft are great in their respective roles. Robinson has always played the thoughtful investigator well and Raft returns to his roots playing a heavy and is in great form here. If this film had just been a straight gangster movie, it would have been amazing to see these two play off each other. The element that doesn't quite keep this movie from fully coming together is Peter van Eyck as Hartmann. Peter van Eyck is great in the role don't get me wrong, but it's his subplot involving some Red Scare espionage that keeps this film from truly coming together as it could have - especially when the Commie Menace takes center stage so late in the film's run.

All around, 'A Bullet For Joey' is a decent watch and a fun time. It may not be as satisfying as it could have been, but the final product is worth the time you put into it. It's great to look back at these old classics and see a means of slow burn story telling that is starting to feel like a luxury in modern films. This is a movie that takes its time to build and set up its story and major players. We know who everyone is, their motivations, and we are invested in them as characters - even if the story elements don't quite come together.

'A Bullet For Joey' arrives on Blu-ray thanks to Kino Lorber and their Studio Classics line and is pressed onto a Region A locked BD25 disc. Housed in a standard case, the disc opens to the main menu.

Presented in its native 1.75:1 aspect ratio, this 1080p presentation of 'A Bullet For Joey' leaves a little something to be desired. Part of the problem with this transfer is that the fine details never really come into sharp focus. Film grain is apparent and stable throughout and yet fine facial features, clothing and scenery details are routinely a little on the soft side. The film's Black and White greyscale is pleasing offering some strong and inky black levels. There is some apparent age-related wear and tear but only in the form of small nicks and scratches - nothing too serious or distracting. Overall this is a pretty good transfer but if I was a betting man this transfer is minted from an older scan. Not terrible, but not demo-worthy either.

With a DTS-HD MA 2.0 track, 'A Bullet For Joey' only earns some average points for its audio track. Dialog is crisp and clean and relatively easy to hear throughout - it's just the rest of the audio elements that don't quite work as cleanly as they should. There is an odd heaviness to this track that makes most of the film sound muddy. Like I said, the dialog is clean enough but not quite as resonant as it could have been. The same goes for the film's score by Harry Sukman, it's there and it's a pretty piece of film music that sets a scene well enough - but then it just never really comes to life. In the end, these are relatively minor quibbles for a movie of this age, but at the same time, deep down you know this thing could sound a bit better than it does if some time had been allotted for a proper and thorough A/V remaster.

Original Theatrical Trailer: (HD 2:07) A solid trailer that does a decent job setting up and selling the movie to audiences.

He Ran All The Way Trailer: (HD 2:13) Looks to be a solid thriller starring John Garfield and Shelly Winters that has me interested for this one to come out on Blu-ray.

Witness to Murder Trailer: (HD 2:08) Barbara Stanwyck stars in this thriller that looks to be a good bit of fun! The trailer maybe gives away too much, but should still be a worthwhile watch.

'A Bullet For Joey' may not be the greatest thriller to reach the screens and find it's way to Blu-ray, but it's a solid source for some easy entertainment. Kino Lorber has done a decent job pulling together this Blu-ray featuring a serviceable A/V presentation and some trailers for extras. Those interested in this release should consider it worth a look.

Sale Price 29.96
Buy Now
3rd Party 29.96
In Stock.
See what people are saying about this story or others
See Comments in Forum
Previous Next
Pre-Orders
Tomorrow's latest releases