A down-and-out American boxer becomes involved in a feud between two Japanese brothers.

While there may be times I lament a movie's tonal inconstancies, every now and again you get a movie that didn't have a sense of what it was going to be at the outset and just becomes an entertaining mess. These are movies that start out as heady character-driven films then change course towards becoming some sort of run-of-the-mill action thriller but then suddenly wind up being a gory cheap exploitation flick by the time the credits roll. John Frankenheimer's 1982 movie 'The Challenge' starring Scott Glenn and the legendary Toshiro Mifune. The film starts out earnestly enough as a cultural fish-out-of-water action movie but can't sustain its lofty aspirations before devolving into a bloody, gory, andviolently entertaining flick!

Former big time boxer Rick Murphey (Scott Glenn) has seen better days. Because of his lack of discipline and a stubborn nature, the man's left taking beatings as a sparring partner for younger fighters. The pay is low, and he endures beating after beating just to make a couple of bucks. When he knocks out an indignant up-and-coming fighter, Rick is fired from his gig but also inadvertently puts himself up as a prime candidate for a more lucrative job. Immediately Rick is visited by two Japanese people, a father and daughter looking for his services. Wheelchair-bound Toshio Yoshida (Sab Shimono) and his daughter Akiko (Donna Kei Benz) need Rick to carry an item to Japan for them. Rick thinking it has something to do with drugs, wants no part of the deal. When they explain it's not drugs but is in fact, an ancient family heirloom, an ornate family sword that people would likely try to rob in transit, Rick is more than willing to take on the job - because it pays $2000.

Sure enough, as soon as Rick sets foot in Japan, he's picked up by toughs working for Hideo Yoshida (Atsuo Nakamura). What rick soon realizes is that he's been tossed into the middle of a generational family feud that has been going on since before World War II. Both Hideo and his older brother Toru (Toshiro Mifune) desire the sword to complete a set that has been passed down from father to son for generations. While Hideo is more than willing to use hired gun thugs to get what he believes is rightfully his, Toru rests his methods in honor and tradition. Rick is caught jockeying between the two as he wrestles his own inner demons. Is Rick truly a punch-drunk has-been boxer who will do anything for a buck? Or is he a man of honor, someone willing to learn a new path towards a better way of life? 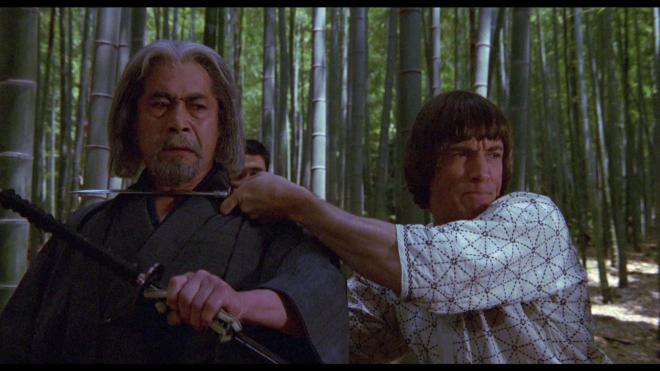 If one is going to start watching John Frankenheimer's 'The Challenge' expecting a strong character study film that looks at the balance between morality and greed, you'll get that movie, but you'll also be getting a wild and often bloody violent exploitation-style action movie too. Filled with some fantastic performances, especially between Scott Glenn and Toshiro Mifune, 'The Challenge' is a movie that at times feels like it doesn't know what it wants to be. Of course, when you have a family feud involving swords you naturally expect blades to lose their scabbards and start cutting into bad guys, but this film never quite finds the balance been character drama and hokey action flick. Even through these inconsistencies, 'The Challenge' is a heck of a lot of fun.

If you go into the film looking for a little bit of off the cuff dark humor and some ultra-violence, then you should be well served by 'The Challenger.' I would love to break down the deaths because as the film's themes and character dramatics become too unwieldy, it feels like Frankenheimer and crew decided to just go for broke and make the film as violent as possible in the closing moments. Whether you take to this movie or not I believe will depend on your level of expectations going in. If you're believing you're going to see one of Frankenheimer's better character pieces like 'Birdman of Alcatraz' or 'The Manchurian Candidate' - as this movie easily could have been - you'll probably come away from it disappointed. On the other hand, if you're gunning for a movie that works as a prelude to such movies as 'Year of the Gun' or 'Dead Bang' then you're going to be in the right mood for this particular John Frankenheimer flick.

'The Challenge' arrives on Blu-ray thanks to Kino Lorber and their Studio Classics line of releases. Pressed onto a Region A locked BD25 disc, the disc is housed in a standard Blu-ray case and loads directly to a static image main menu representative of the film's poster artwork.

'The Challenge' is given a pretty decent 1080p 1.85:1 transfer. Colors are bright and vibrant hitting the primaries when and where it counts - especially blood reds! Blood has that wonderful bright syrupy look to it. Green forests and blue skies are spot on. Flesh tones can appear a tad pink at times but it's difficult to say if that is a color grading issue or just baked into the film itself. Film grain is apparent through out so any worries of scrubbing should be put to rest. There is a tad bit of edge enhancement during some sequences, the image can appear a tad crunchy in places with some slight banding here and there, but otherwise the image appears relatively compression free. Black levels are inky and rock solid offering the image plenty of depth without reducing characters wearing dark clothing to floating heads. Where the image suffers is in the damage department. While mild speckling is prevalent through most of the film's run, there are some instances of staining and some vertical scratches here and there. They're not overly serious issues but worth mentioning.

With a DTS-HD MA 2.0 audio track, 'The Challenge' offers plenty of presence and pop. Dialogue is crisp and clear keeping to the front/center channels. The track has just the right amount of atmosphere and presence to give each scene a sense of dimensionality. Imaging is pretty decent, there isn't a lot of channel movement, but when throwing stars come flying around and into people's faces, it's a great movement effect that zips from one side to the center followed by a wonderfully heightened scream of pain. As great as the dialogue and sound effects are, it's the fantastic Jerry Goldsmith score that truly stands out. It's an average action movie score from the composer but it's still better than 90% of other action movie compositions out there. I mean come on, it's Jerry Goldsmith! Add in the ultra-violent content with this score and you have a great movie watching experience.

I've come to accept that when you plug in a movie that is directed by John Frankenheimer you've got a 50/50 shot of it being a solid character piece or a hokey disposable piece of schlock. While 'The Challenge' falls into the latter category, it's still a fun piece of hokey schlock action cinema. On top of the bloodletting, the reason to see this flick is for gruff and tough Scott Glenn and the always awesome Toshiro Mifune swinging swords and taking about 8 inches off the top of some unfortunate minions' heads. Kino Lorber has ensured that this Blu-ray release is given a solid all around audio/visual presentation but the lack of extras makes it a tough one to fully recommend but 'The Challenge' is still worth a look.