Twenty years after an accident caused the death of the lead actor during a high school play, students at the same small town school resurrect the failed stage production in a misguided attempt to honor the anniversary of the tragedy - but ultimately find out that some things are better left alone.

Clocking in at a very brisk 81 minutes, filmmakers Travis Cluff and Chris Lofing — the latter of which makes his feature-length debut — waste no time in setting up the basic premise and characters of 'The Gallows.' Keeping to its found-footage theme, the movie opens with an old VHS recording of a high school play that goes shockingly wrong when one of the kids is accidentally hanged due to a prop malfunction. Twenty years later, the incident has ripened into an urban legend that includes a couple non-essential locals gossiping about unexplained noises in the school's auditorium, doors mysteriously locking on their own and the faint footsteps of an unseen person walking across the stage. The tale's spookiness is reinforced by the fact that the same school has decided to perform the same play on the same day. Coincidence? In the horror genre, the answer is an obvious NO. Nevertheless, I will say I rather enjoyed this aspect of Cluff and Lofing's meticulously premeditated script, establishing a creepy vibe while providing the plot a sense of history and a proximity to current events with little effort.

However, that bit of admiration and hope that it could only get better is soon lost when the primary characters, of which there are only four, are introduced. An important aspect of any good scary story are the people inhabiting the fictitious horror world, be it on the silver screen, the page or any other medium. The level of which any talented storyteller can and should effectively frighten his/her audience is largely dependent on how well she/he can make likeable, sympathetic characters we don't wish to see harmed or killed. (The "Final Girl" theory is a terrific example.) Even when confronted with flawed protagonists — our anti-heroes, if you will — there is still something appealing about their personality that engages and makes them a pleasure to watch. Think Victor Frankenstein of Mary Shelley's 19th Century masterpiece as well as James Whale's 1935 monster-centered 'Bride,' and more recently Bruce Campbell's chainsaw-wielding goofball of Sam Raimi's 'Evil Dead' series and Simon Pegg's directionless nincompoop of Edgar Wright's 'Shaun of the Dead.' Imperfect characters that nonetheless have audiences cheering for them and continue to do so to this day.

This is where our relatively young filmmakers fail miserably, along with a few other areas and details within the logic of the narrative. The four kids featured in this supposed frightening supernatural tale are not the least bit relatable or likable. A case could be made for Reese Mishler's love-struck football player, who volunteered to play the lead in the school play because he crushes on his costar (Pfeifer Brown), the aspiring thespian responsible for bringing back this haunted production. The plot understandably centers on these two, a fact that becomes clear at the movie's not-so-shocking twist ending, but Reese is much too generic and prosaic to ever be memorable while Pfeifer is always kept at a distance, as purely an object of desire than well-rounded, until suddenly she becomes a red-herring necessity. Moreover, their teenage romance and an eventual lover's squabble is overshadowed by the other two gratingly annoying kids, Ryan Shoos and Cassidy Gifford (daughter of TV personality Kathy Lee Gifford). The two are nothing more than the routine bully stereotypes who peer-pressure Reese into illegally breaking into the school afterhours to sabotage the production, making them explicitly responsible for the horror they encounter. 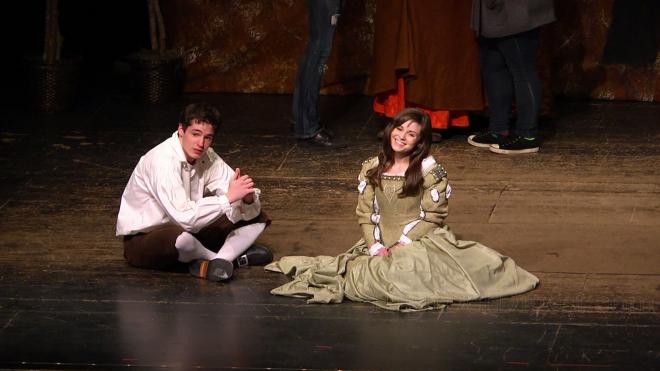 Furthermore, much of the plot starts losing its traction and noteworthiness when throwing logic into the mix. In fact, practically the whole thing comes apart at the seams once we put the entire storyline and the chain of events in rational order. First, Ryan and Cassidy pretending to somehow make a reasonable argument that convinces Reese into deliberating destroying the production is not only eyebrow-raising stupid, but it also makes the kids seem like a trio of boneheads we gladly want to see meet their doom.  Pfeifer's well-timed presence when the other three are putting their idiotic plan into practice automatically makes the innocent-looking girl suspect, further adding to Ryan's devious scheme as eye-rolling convenient. Of course, knowing the conclusion and how everyone is connected to the wraithlike Hangman haunting the school is ultimately what ruins the logic. Added to that, certain details in the last couple minutes let slip that the story really makes no sense at all. How do twenty years later equate to teenage kids in high school? Sadly, if I go any further, I'm in danger of revealing spoilers.

I'm sure some fans out there, as well as the filmmakers themselves, will try to make some nonsensical justification for any failures in the narrative's logic, but frankly, what's the point. 'The Gallows' is one of those movies that will attract audiences no matter what some old, fuddy-duddy critic points out or whines about when all that's required in a horror movie is that it be scary, which for many this low-budget succeeds admirably. And its box-office success relative to its overall cost pretty much proves it. Admittedly, there are moments of nerve-wracking tension and hair-raising suspense, but the filmmakers, for the most part, rely on the conventional jump scares and cheap false promises — where we are made to believe something is about to jump out from around the corner, but it turns out to be mannequin. I can't shake the feeling Cluff and Lofing's end goal was ultimately to form a franchise, if not force a new horror villain in the ghostly Hangman upon moviegoers.

In the end, once we start putting some thought into this, the whole movie falls apart. It's probably best to watch it once with as little logic as possible. And then, never think about it again.

Warner Home Video brings 'The Gallows' to Blu-ray as a two-disc combo pack with an UltraViolet Digital Copy. The Region Free, BD50 disc sits opposite a DVD-9 copy inside a blue, eco-cutout case with slipcover. After a couple skippable promos, the screen changes to a static screen with a generic set of menu options along the bottom of the screen.

The hangman haunts the tormented stage with a very satisfying AVC MPEG-4 encode (1.78:1), but as would be expected from a low-budget shot entirely on HD cameras, the picture comes with that sterile, digital look that's frankly off-putting. Granted, the look is intentional given the subgenre and the characters, but it nonetheless doesn't make for an attractive movie because it's the furthest from film-like.

Despite that minor personal gripe, however, the high-def transfer is highly detailed with lots of ultra-fine, razor sharp lines in nearly every shot. Facial complexions are, by far, the most impressive, showing lifelike textures and revealing the tiniest blemish in the faces of the cast. The palette is vibrant and colorful throughout with lots of emphasis on the reds, from T-shirts and helmets to the school's emergency lights. One common drawback in filming digitally are the somewhat weak brightness levels, but thankfully, that's not the case here, showing accurate, inky rich blacks from beginning to end with excellent shadow detailing in the darkest portions.

Sadly, the same can't be said on the contrast. For the most part, the presentation is well-balanced and comfortably bright, but there are several instances where whites tend to run a tad too hot, creating some mild blooming and posterization in the faces, walls and various highlights. Along with a sterilized appearance, the video is far from perfect, but fans are sure to be pleased and satisfied with the results.

The hangman's noose creepily swings back and forth thanks to a highly enjoyable and terrifically effective Dolby Atmos soundtrack that will leave viewers searching the room for the sharp, hollow creaks of the rope. Admittedly, the first twenty-two minutes of the movie don't make much of an impression with much of the activity centered in the fronts, which for all intents and purposes is intentional. However, once the kids break into the auditorium, all sorts of creepy noises move about the room.

A good portion of this still focuses our attention on the on-screen action, but the top two fronts are put to great use as sounds either echo above or unseen objects in the distance jump to the ceiling. This creates an amazingly wide and expansive soundstage, a half-dome wall of sound that largely feels consistent and keeps the listener terrifically engaged. At around the 43-minute mark, we have one of the track's best moments when the disturbing sound of a swinging noose slowly creeps up the center of the screen and continues to swing overhead for several seconds. It's a spine-chilling experience that's repeated a few more times throughout the movie though this one is a genuine highlight. Another is at around 65 minutes when two of the kids run to the scaffolds above the theater and several rattling noises clatter and clink above and all around the listening area, creating a satisfying dome-like effect.

Other discrete effects are employed during the rest of the movie, minor subtle sounds like a mysterious wind blowing through the hallways, filling the entire room with an unnerving feeling. These moments nicely expand the soundfield and feel very immersive, sure to make anyone a bit nervous of what's coming next. The noises flawlessly pan across the screen and from front to back, putting the viewer right in the middle of the terror on several occasions. There are times when loud noises and sudden jump scares come off too bright, but dynamic range remains clean and detailed while bass is plentiful and weighty, hitting some very deep ultra-low moments that provide the action some well-earned frights (bass chart). With distinct, well-prioritized vocals, this lossless mix is a great deal of fun, making the movie all the more tolerable and arguably worth watching.

Clocking in at a very brisk 81 minutes, filmmakers Travis Cluff and Chris Lofing waste no time in setting up the basic premise and characters of 'The Gallows.' However, even at neck-breaking speed, the movie comes riddled with serious problems in the narrative and some glaring plot holes. The Blu-ray arrives with an excellent picture quality and a highly enjoyable audio presentation that fans will gladly devour. With a decent collection of supplements, the overall package makes for a rental at best.

Sale Price 7.69
List Price 14.97
Buy Now
3rd Party 29.99
In Stock.
See what people are saying about this story or others
See Comments in Forum
Previous Next
Pre-Orders
Tomorrow's latest releases