A mysterious man arrives in a small Canadian town seeking his wife, though his presence plunges the community into a bloodbath.

Pensive and moody with an eloquent, sophisticated style, 'The Stranger' establishes an aire of mystique right from the onset. Shot almost entirely in a shallow focus, giving the sharper foreground objects, such as faces, a bold intensity, the photography of Chechu Graf washes the anamorphic image with cold, steely blues and a melancholic gray tone as a mysterious stranger arrives in a quiet Canadian town during the dead of night. The streets seem quiet enough — peaceful and relaxing — but there's also a pervading sense of emptiness and loneliness in the silence while the stranger walks the empty neighborhoods. Splashes of yellow, earthy colors hint at possible life within the many silent houses, but the streets are distinctly lifeless. When the gruff, sourpuss man knocks at the door of one such house, asking for the whereabouts of his lost love Ana, he discovers she's been residing in the local cemetery for the past sixteen years.

It's a somewhat depressing start for a film that makes its intentions ambiguous and keeps it that way for a good chunk of the runtime. In fact, the narrative, at times, goes out of its way to never mention what is really going on, the reasons for the stranger's death wish or why he's hysterically protective of his blood. Sometimes, the man, who we later learn is named Martin (Cristobal Tapia Montt), cruelly yells at others that he is infected and highly contagious. The contagion is never explained, but it's not difficult to guess Martin is clearly a vampire. And no, that's not a spoiler; the audience can easily arrive at that conclusion when Martin visits Ana's grave and flashbacks to the last time he saw her. The sight of a woman with her throat ripped open and Ana's mouth covered in blood is clue enough. It can be a bit irksome that the filmmaker's don't outright state the obvious — Martin simply refers to himself as diseased — but it also makes for an engaging start, generating a sense of mystery that's well sustained.

After visiting Ana's grave, the story, written by Chilean filmmaker Guillermo Amoedo, who also directs, grows drearier when Martin sits on a park bench to wallow in his misery. The reasons for his sixteen-year disappearance and her death still remain unknown. Soon, his desire to moan in despair peacefully is interrupted by a trio of ruffians led by Caleb (Ariel Levy), and we know he's bad news the instant we set on eyes on him because he bleaches his hair to the point of looking albino. Shifty eyed and walking with an arrogant, untouchable gait — a meaner and nastier version of Cobra Kai legend Johnny — Caleb and his small band of drunkards brutally beat Martin, leaving him for dead in a nearby ditch with the help of local police Lieutenant De Luca (Luis Gnecco). And once again, the filmmakers don't come clean with how the two men know each or why the older feels obligated to help the younger, leaving it to the audience to determine their relationship, which does become clearer later. 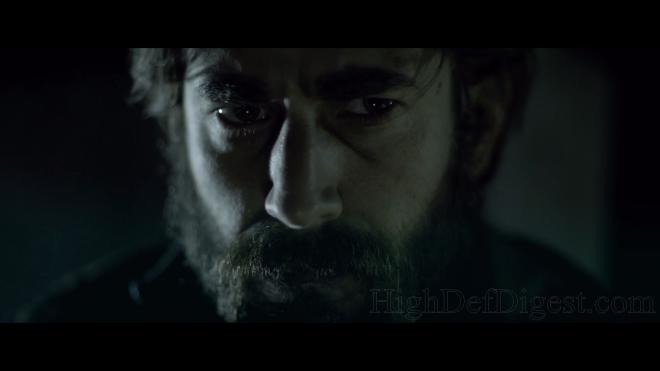 This persistent effort at being mysterious is at once intriguing but grows frustrating and tiresome as the minutes wear on. Going into the second half of the movie, the tactic begins to feel labored, making the narrative drag in spite of the sudden hostility with the lieutenant and Caleb intensifying. Then again, it sometimes feels as exciting as watching water boil. While still maintaining the same dreary, atmospheric tone, the plot piles on to Martin's woes — because an eventual war between him and the other two is not bad enough — when he involuntarily sparks a friendship with a lonely, troubled graffiti artist teen, Peter (Nicolás Durán). And really, this aspect of the tale is only here to thicken the mystery and introduce a dramatic element that also comes across a tad forced, mostly because their relationship is both predictable and much too convenient to ever seem like happenstance. Granted, as things progress and viewers learn more, tensions rise, but after being kept at a distance for so long, the emotional impact the filmmakers hoped by film's end isn't there.

It's fairly obvious Amoedo aimed to explore vampire lore from an original point of view. However, the concept of the romantic, melancholic undead creature of the night bemoaning his eternal curse as a disease is far from a new concept. Like Henry Hobson's 'Maggie' earlier this year, there are only so many ways of telling a familiar genre formula before we begin expanding it into uncharted territories. And Amoedo's 'The Stranger' labors tirelessly at delivering just that, replacing the horror with drama and where the self-loathing bloodsucker is forced into the reluctant antihero role. Unfortunately, this homeless-looking vamp doesn't really have the fangs, both literally and figuratively, to win over genre fans thirsty for fresh meat.

Shout! Factory brings 'The Stranger' to Blu-ray under the distributor's Scream Factory line. The Region A locked, BD50 disc is housed inside the normal blue case with reversible cover art. At startup, the disc goes to a generic menu with full-motion clips and music playing in the background.

The mysterious stranger wanders onto Blu-ray with a heavily stylized but still excellent high-def picture quality. Shot on digital HD cameras, the 1080p/AVC MPEG-4 encode (2.40:1) arrives with a deliberately restrained cinematography that favors a mix of cold, steely blues for exterior shots and warm, yellowish earthy tones for several indoor scenes. Basically, it's the orange-teal and grey palette that's not usually attractive, but for this movie, the style seems to nicely complement the story.

Overall colors appear drained and lackluster, but it's intentional while primaries remain cleanly rendered and accurate. Contrast falls on the lower end of the grayscale, but white remain bright and clean with excellent visibility of background information. Definition is not the sharpest, but fine lines in various objects are distinct with daylight sequences being the strongest while facial complexions are often revealing in close-up. Black levels are badly affected by the film's appearance, looking plenty deep and rich throughout with very good detailing in the darkest shadows.

A few minor gripes in the presentation are several moments of mild banding in the night sky and a tad blooming. Otherwise, the picture looks great and viewers will be pleased for the most part.

Although it fails to ever deliver the sort of sonic punch that makes for an excellent horror treat, the low-budget feature still provides a pleasing and engaging soundtrack. And per usual, Scream Factory gives the listener two listening options, but since the film was recorded with a surround sound design, the review only covers the 5.1 DTS-HD MA soundtrack.

Right off the bat, most will take notice of what seems like a strange audio anomaly in the vocals. It would appear the horror drama comes with intentional ADR work that feels distant and detached, not always perfectly matching the lip movement of actors. Not sure if it's deliberate or not, but the dialogue and whispered conversations thankfully remain clean and intelligible throughout, always taking priority over the rest of the track.

The lossless mix doesn't come with many loud action moments, but the presentation nonetheless delivers a wide, broad soundstage with outstanding discreteness and fidelity. With distinct separation in the mid-range, the musical score enjoys plenty of breathing room, providing lots of warmth and a welcoming presence. The low-end is shockingly deep and powerful, creating a creepy, palpable rumbling effect that digs into the lower depths on several occasions and nicely adds to several suspenseful moments. (bass chart) Atmospherics fill the room with the sounds of local wildlife, enhancing the soundfield and generating a satisfyingly immersive audio experience. All in all, it's a great high-rez track.

Pensive and atmospheric, with an eloquent, sophisticated style, 'The Stranger' tells the tale of lonely, self-loathing vamp Martin searching for his lost love but only succeeding at finding trouble with the locals. While his friendship with a lonely graffiti artist teen provides respite the heavy, thick air of dreariness and misery, the dramatic element is ultimately not enough to deliver the emotional punch Chilean filmmaker Guillermo Amoedo was aiming at. The Blu-ray arrives with an excellent audio and video presentation that will keep viewers engaged, but the supplements are offer little else. Overall, the package makes for a safe rental.

Sale Price 14.98
Buy Now
3rd Party 14.98
In Stock.
See what people are saying about this story or others
See Comments in Forum
Previous Next
Pre-Orders
Tomorrow's latest releases