As the nation reels from a lethal virus that turns its victims into zombies, Wade's (Arnold Schwarzenegger) daughter Maggie (Abigail Breslin) has been infected. Now, as Maggie's condition worsens, Wade will stop at nothing to protect her from the authorities seeking to kill her to eradicate the virus.

Like a pensive meditation on death, family, and learning to appreciate life when it's too late, 'Maggie' is an unusual blend of horror and drama with the potential to be something unmistakably unique. Unfortunately, that mixture doesn't quite deliver the satisfying genre cocktail fans would anticipate, failing to find the perfect balance between the two seemingly opposing story types. Granted, the plot of teenager Maggie Vogel (Abigail Breslin) allowed to spend her final days with friends and family before turning into a zombie is an original concept loaded with possibilities from first-time writer John Scott III. Growing from adolescence into adulthood is awkward enough, but coming to the realization that death is inevitable and fast approaching should add a gut-wrenching challenge. While out with friends she's been avoiding, the last night of teen silliness and hijinks meant to be a distraction turns into a serious conversation about the fear of death. Such scenes create tense dramatic moments that are engaging.

The tale is at its most tragic when the camera turns its gaze upon Maggie's doting father, Wade (Arnold Schwarzenegger). In fact, he is the production's emotional core, and Schwarzenegger does a remarkable job as a father struggling with a disturbing moral decision. As a parent faced with the difficult dilemma of seeing his daughter suffer as she slowly slips into death or possibly giving her respite from the pain of dying, this should go down as Schwarzenegger's most powerful career performance. The agony of having to say goodbye to one's child is a heartbreaking thought in itself, and the legendary actor of action favorites like 'Predator,' 'Total Recall,' 'Conan the Barbarian' and 'The Terminator' franchise demonstrates a wealth of depth and gravitas never before seen, let alone ever expected of him. The Austrian-born former Governor of California hits the right emotional chord in nearly every scene, using his A-list status to quickly gain our sympathy in spite of it probably being the wrong choice.

Taken as a whole, Scott's script is a fantastic idea on paper, aided by first-rate performances from its two leading actors, and it should ideally leave moviegoers pleased with the outcome. But sadly, by the time the end credits roll across the screen, we're left feeling hollow by the events that transpired, walking away with a strange sense of indifference rather than the emotional heartbreak promised by the story and visuals. When Wade and Maggie are confronted by the similar situation of neighbors — a family of three, where the dad and daughter have become the walking dead and a teen friend is in the final stages of the infection — the experience foreshadows our protagonists' predicament, tipping the scales in favor of the right decision. The scenes also suggest an eventual showdown between the Vogels and the local authorities, which are further intensified by conversations with the sheriff (Douglas M. Griffin) and Wade's wife (Joely Richardson), but in the end, we're left unsatisfied. And the final solution strains for an emotional impact that ultimately feels undeserved. 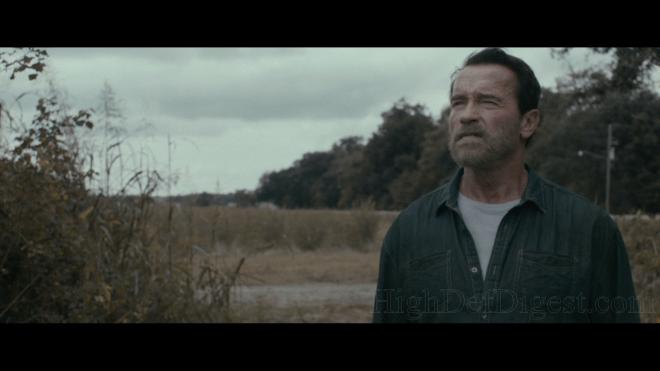 When so much potential in the plot seems lost in translation, we're left wondering where it might have gone wrong, and it would seem all fingers point to relatively young director Henry Hobson. Making his feature-length debut, his only previous experience has been in miscellaneous design for various projects and the art department. On the one hand, this doesn't bring into question his ability to helm a low-budget production, but, on the other hand, his inexperience telling a story longer than a few minutes really shows. As if ripping directly from the pages of the Terrence Malick handbook, Hobson furnishes the screen with glorious, rapturous scenery that generates a sense of reflective majesty amid an apocalyptic chaos. Although several framing and composition choices come off very odd and miss their mark entirely, his approach is nonetheless effective at creating a somber tone. Only, the style, which frankly feels like a distracting, brazen rip-off, fails to accurately reflect the individual characters.

It's clear the hopes Hobson had for 'Maggie,' especially as his big break, but without establishing a unique voice and style of his own, the film ultimately falls flat. As Maggie's condition worsens, the drama is meant to slowly evolve into suspense, but the young director can't seem to truly pull off either an emotional sway or a genuinely creepy atmosphere. The special effects, however, by the talented folks at Autonomous FX South are gruesomely impressive and realistic. Most memorable is the slow progression of the infection spreading throughout Breslin's body and her eyes fading from glossy grays to soulless, blacken orbs. And in spite of Hobson's lackluster direction, the photography of Lukas Ettlin ('Battle: Los Angeles,' 'The Lincoln Lawyer') is a strikingly gorgeous display of emotion, of experiencing the characters' sense of dread and the sad realization of inevitable doom, captured through expressive camerawork and a limited color palette. 'Maggie' may not be the knockout film its creators imagined it to be, but it has enough positives to warrant a viewing from genre fans.

Lionsgate Home Entertainment brings 'Maggie' to Blu-ray on a Region A locked, BD50 disc housed inside a blue, eco-cutout case with a stylized slipcover and a code for an UltraViolet Digital Copy. At startup, the disc commences with a series of skippable trailers before switching to the standard menu screen with full-motion clips and music.

'Maggie' lurches to Blu-ray with a heavily stylized yet good-looking AVC-encoded transfer that augment the film's dreary tenor.

Contrast is very low-key and muted but on the whole, well-balanced and consistent, creating a very somber, grayish tone that's sustained throughout. The overall palette is also drained and faded, favoring an interesting golden hue that reminds of Roger Deakins' work in 'O Brother, Where Art Thou?' but balanced with a steely blue overcast in daylight sequences and yellow-orange highlights at night. Flesh tones intentionally appear flushed and sickly, but it's meant for greater emotional effect. Brightness levels are noticeably affected by these artistic decisions. Blacks come off really strong with the darkest shadows ruining the finer details, looking pretty cloudy, dull and faded for most of the runtime.

Thankfully, the 2.40:1 image displays excellent definition and details with lifelike textures in facial complexions. In the end, the creative choice in the cinematography adds to the story's emotional core, but it's not much of a looker.

On the plus side, the accompanying DTS-HD Master Audio soundtrack begs viewers to find the horror drama's humanity with pleasing results. With the plot's attention on story and character interactions, dialogue is the most impressive aspect, delivering excellent clarity and intonation in every intimate conversation.

Of course, the design does favor a front-heavy presentation, so it's not much of a surprise vocals are well-prioritized within a wonderfully engaging and entertaining soundstage. Imaging is spacious and feels immense with plenty of sharp details and convincing off-screen activity. Dynamic range is surprisingly extensive with distinct separation between a variety of restrained noises and sounds, and this is especially noticeable during David Wingo's string-heavy score. The original music, along with a few understated atmospherics, also bleed into the rears, creating a satisfying soundfield. Most impressive is a shockingly powerful low-end with several subtle ultra-low moments that add suspense and a bit of wall-rattling depth (bass chart).

Like a pensive meditation on death, family and learning an appreciation for life when it's too late, 'Maggie' is the unusual blend of horror and drama with the potential for something unmistakably unique. Unfortunately, that mixture doesn't quite deliver the satisfying cocktail its creators imagined it to be, but it has enough positives to warrant a viewing from genre fans. The Blu-ray arrives with a heavily-stylized picture quality that's faithful to the intentions of the filmmakers, but it's not much of a looker while the audio presentation is bit more gratifying and engaging. An average collection of supplements rounds out the overall package, but ultimately, the curious should give it a rent before purchasing.

Sale Price 14.99
Buy Now
3rd Party 2.1
In Stock.
See what people are saying about this story or others
See Comments in Forum
Previous Next
Pre-Orders
Tomorrow's latest releases