Love & Mercy is an unconventional portrait of Brian Wilson (portrayed by both John Cusack and Paul Dano), singer and songwriter for The Beach Boys. The film intimately examines the unique journey and ultimate salvation of this musical icon, whose success came at an extraordinary personal cost.

True genius can be both a blessing and a curse, and few films depict both sides of that loaded coin better than 'Love & Mercy,' Bill Pohlad's elegant and exhilarating portrait of Brian Wilson, the driving creative force behind one of the most successful and influential groups in American pop music history, The Beach Boys. More of a character study than a straightforward musical biopic, 'Love & Mercy' examines the personal demons that afflicted Wilson, the outside influences that exacerbated them, and the redemptive love that ultimately rescues him from the brink. It's a very personal story told in an intimate manner with plenty of insight and sensitivity, and admirably avoids the tired clichés that often plague this well-worn genre. Yes, the filmmakers take some creative license with Wilson's tale, but any embellishments are far from egregious and don't harm the movie's integrity.

Wilson's bizarre existence often seems stranger than fiction, but it's the film's inspired presentation, not the disturbing details of his mental struggles, that makes 'Love & Mercy' so fascinating. Pohlad deftly juxtaposes two pivotal periods in Wilson's life - the highly creative time in the mid-1960s that spawned what would later become The Beach Boys' definitive album, 'Pet Sounds,' and Wilson's personal nadir in the mid-1980s when he was under the care and control of Eugene Landy (Paul Giamatti), a manipulative psychologist who micromanaged his every move - and cuts back and forth between them, so we can understand the pressures that fueled Wilson's neuroses and led to his breakdown, and witness the ravages of his illness and debilitating effects of his very controversial "treatment." Along the way, Pohlad depicts the behind-the-scenes turmoil that ripped apart The Beach Boys, leading to Wilson's secession from the group, and his later romantic relationship with Melinda Ledbetter (Elizabeth Banks), a car dealer whom Wilson meets by chance and who becomes his champion and savior.

This novel, non-linear approach sharpens the edge of an already edgy story, keeping the viewer off-kilter and challenging us to put together the pieces of Wilson's life, just as he was challenged to do the same. The film also forgoes much exposition, choosing instead to thrust us directly into the action, so we feel as if we're a fly on the wall grabbing glimpses of Wilson's experiences, instead of being led by the hand down an orderly road and instructed what to think and feel. In another effective move, many of Wilson's most devastating moments are related through dialogue, not dramatically enacted on screen. Just as Hitchcock believed one's imagination of violence can be scarier than the real thing, so too are Wilson's recollections of his abusive youth and the private hell he often endured.

Pohlad's best choice, however, was casting two actors to portray Wilson in the two stages of his on-screen life, thus more firmly separating the stories and dividing the character into two very different Brians. Both Paul Dano (young Brian) and John Cusack (middle-aged Brian) beautifully capture the vulnerability, quirkiness, artistry, and childlike naiveté that define Wilson, and both naturally embody him. Dano especially impresses, as he resembles Wilson physically and even vocally, and transmits the creative fire that consumed and eventually tortured him. Both men easily could receive Oscar nods for their captivating portrayals that give this movie its guts.

Banks also makes a statement, projecting an outward allure and inner strength as she guides Melinda through the minefield of both starting a relationship with an unstable, damaged man and dealing with his highly protective, control-freak guardian. As portrayed by Giamatti, Landy is a creepy, smarmy man with a vicious mean streak who refuses to loosen his mental and physical stranglehold over his charge. Though Landy helped Wilson immeasurably during his darkest days (this period is not depicted in the film), he also took shameless advantage of him, systematically molding Wilson into a hyper-dependent lapdog unable to make a move without his master's approval. It's a juicy role, but Giamatti is careful not to overplay it, and the result is an affecting portrait of insidious manipulation.

'Love & Mercy' treads an emotional, romantic, and inspirational path, but at its core, it's a movie about the vast potential, searing impact, creative construction, and unrelenting barrage of sound. Sound is everywhere, even inside our head, and Pohlad ceaselessly emphasizes its invigorating and debilitating effects on Wilson by sensitizing us to its nuances. He offsets The Beach Boys' sublime harmonies with the dissonant accents of everyday life and Wilson's joyful and frustrating struggle to fashion a fresh and innovative riff. When Wilson practices his craft in the recording studio, Pohlad captures his unadorned essence and allows us to witness the goofy genius that would revolutionize the music industry, but he also shows us how Wilson could never mute the volume in his brain and turn off the noise that, at times, would utterly consume him.

I've always enjoyed The Beach Boys, but always (stupidly) regarded them as a lightweight bubble-gum surfer band. (I similarly dismissed Frankie Valli and the Four Seasons before I saw 'Jersey Boys' on Broadway.) 'Love & Mercy' made me view the group in an entirely different light and hear them with a more attuned and educated ear. Since I saw the film, I've been scouring iTunes for Wilson's tracks with and without his Beach Boy cohorts, and I'm sure many others have done and will do the same. Though I realize too many musical interludes would have disrupted the film's intimate drama and carefully composed rhythm, I longed to hear more of the infectious favorites and little-known gems the group produced. Of course, getting inside Wilson's head makes his talent that much more compelling and makes us appreciate the musical gifts he's given us that much more. As Pohlad says on the disc's commentary track, above all, Wilson is "a survivor," and 'Love & Mercy' salutes his mettle, perseverance, and exquisite artistry with both refreshing objectivity and unabashed admiration. And lucky for us, his music survives, too. 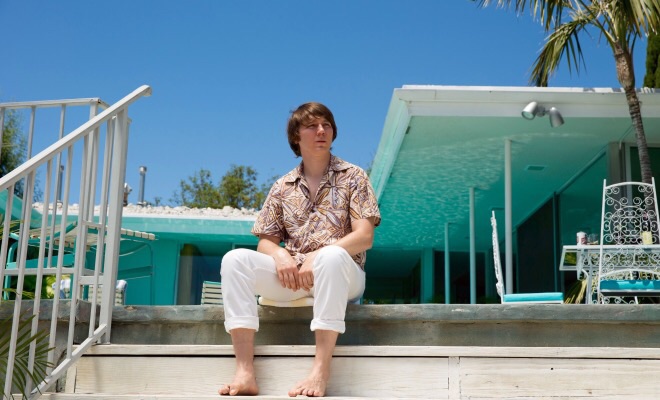 'Love & Mercy' arrives on Blu-ray packaged in a standard case inside a sleeve. A leaflet with instructions on how to access the Digital HD Ultraviolet copy is tucked inside the front cover. Video codec is 1080p/AVC MPEG-4 and default audio is DTS-HD Master Audio 5.1. Once the disc is inserted into the player, previews for 'Mr. Holmes,' 'The Age of Adeline,' 'Amy,' 'Some Kind of Beautiful,' and 'The Homesman' precede the full-motion menu with music.

Dovetailing eras and interspersing various film stocks to create specific artistic effects, director Bill Pohlad gives us a cinemagraphic hodgepodge, but somehow all the pieces fit beautifully together in the crystal clear 1080p/AVC MPEG-4 transfer from Lionsgate. Contrast is perfectly pitched, clarity is top-notch, and just the right amount of grain reflects the story's various moods and textures. (In a bold move, the film was shot on actual celluloid using several different cameras and techniques.) Like the tight harmonies and sunny lyrics of The Beach Boys' tunes, colors are bright and vibrant; Banks' blue dress in the opening scene and blonde hair exude a marvelous depth of hue. Pastels are equally striking (check out The Beach Boys' striped shirts) and flesh tones remain natural and stable throughout. Black levels are rich and deep, whites are crisp, and shadow detail is excellent. Background elements are easy to discern and close-ups render all the emotional angst with great precision. Not a speck or mark sully the pristine source material, which always keeps the eye engaged, and any digital tinkering escapes notice. Optically challenging films don't often translate so smoothly to digital media, but 'Love & Mercy' is a refreshing exception.

Equally engaging, the DTS-HD Master Audio 5.1 track employs all the channels to create an immersive and involving soundscape that sublimely highlights both the music and drama of this wrenching tale. Whether we're in the recording studio, at the beach, or on an airplane, surround activity is fairly constant, providing accents and subtle atmosphere throughout. A couple of especially stirring sequences get us inside Wilson's cluttered head, allowing us to hear all the competing voices that torment him. In another memorable scene, the clinking of silverware against plates rises to a deafening crescendo to reflect Wilson's growing anxiety and paranoia. Quiet moments, such as Wilson's first meeting with Melinda inside a Cadillac, also flaunt a purity of tone that helps us zero in on the characters and their intimate interactions.

The music sounds vital and rich, thanks to exceptional fidelity and tonal depth. The tight, heavenly harmonies waft through the air, swirling around us, and the instrumentals nicely balance them. Dialogue is always clear and easy to comprehend, even when whispered, and no surface noise intrudes. Just a few hints of distortion keep this track from earning a perfect score, but overall, this is a very impressive presentation.

Good vibrations, indeed. One of the better musical biopics of this generation, 'Love & Mercy' employs an innovative structure to examine two eras of Brian Wilson's tortured life and depict his undeniable musical genius. It's all done with warmth, empathy, and an exhilarating sense of wonder that makes us appreciate the man and revere his music more than ever before. Some factual license notwithstanding, this is an engrossing, well-directed film that features performances of great power and depth from John Cusack and Paul Dano, who share a challenging role, yet somehow each makes it his own. Lionsgate's Blu-ray presentation features top-notch video, exceptional audio, and a few decent supplements, all of which enhance this fascinating and emotional film. Highly recommended.

Sale Price 16.74
List Price 24.99
Buy Now
3rd Party 12.73
In Stock.
See what people are saying about this story or others
See Comments in Forum
Previous Next
Pre-Orders
Tomorrow's latest releases