Set in 1854 on the harsh Nebraska frontier, low-life drifter George Briggs (Tommy Lee Jones) is rescued by a pious, independent-minded woman named Mary Bee Cuddy (Hilary Swank). To pay back his debt, George reluctantly agrees to help Mary transport three women driven mad by the harsh frontier life across the treacherous land - where a kindly minister's wife (Meryl Streep) has offered them hospice. The unlikely pair soon realizes just how daunting the journey will be as the group traverses the vast Nebraska Territories, marked by stark beauty, psychological peril and constant danger.

Though he directed the 'The Sunset Limited' in 2011 for HBO, it has been 9 years since Tommy Lee Jones last stepped behind the camera to direct a feature film. His last effort was the 'The Three Burials of Melquiades Estrada,' a modern-day Western that featured an eclectic cast of characters and centered largely on a grizzled ranch hand and his quest to deliver a deceased friend back home to Mexico. In 'The Homesman,' Jones revisits many of the same elements and themes; it is a mid-19th century road movie that is made more ambitious by a complete lack of roads and the hardship inherent in both its central objective and the unforgiving environment the film never misses an opportunity to convey.

Adapted from Glendon Swarthout's 1988 novel of the same name, 'The Homesman' centers on Mary Bee Cuddy (Hilary Swank), a spinster living on the outskirts of Loup, Nebraska – which has no shortage of men, but a distinct lack of men interested in marrying her. The film opens with sweeping shots of the plains, and then shifts to Cuddy's solitary life, working her fields alone before preparing a fine meal for her neighbor, whom she intends to broach the subject of marriage. Not long after the proposal of a proposal – which Cuddy sells more like a business arrangement than one born of any romantic inclination on her part – she finds herself alone, playing piano on a swath of fabric imitating the layout of a piano's keys, while she waits the delivery of an actual musical instrument.

Jones, who co-scripted the film with Kieran Fitzgerald and Wesley Oliver, paints a complete picture of Cuddy before delving into the matter at hand. Cuddy's home is meticulous and well managed, a product of her rigorous, authoritative personality and strong, "bossy" demeanor, which is, as the film suggests, the primary factor in her remaining unmarried. This distinction serves to underline the ways in which Cuddy is different from the three women, who, after a harsh winter, and even harsher existence as the wives of men who range from uncaring, to cruel, to outright sadistic, have all suffered severe psychological breaks. 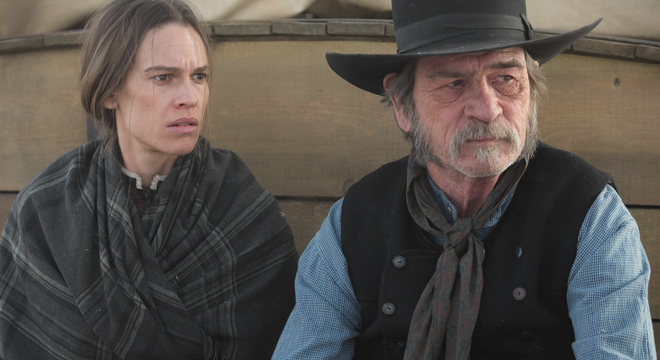 Jones does not offer the women – Theoline Belknapp (Miranda Otto), Arabella Sours (Grace Gummer), and Gro Svendsen (Sonja Richter) – any introduction. Instead, he simply plunges the audience into their unforgiving existence, the bleakness of which is matched by the camera's ascetic eye.

Otto is introduced in a painterly moment surrounded by her husband (William Fichtner), two daughters and the carcasses of their fallen cattle. Later, she unemotionally tosses a newborn into an outhouse. For her part, Richter's torment is told in several parts, beginning with the death of her mother, and then working backwards to reveal her rapist husband (David Dencik) and his increasing frustration with Gro's inability to conceive his child. Gummer falls somewhere between the two, her children having fallen victim to dysentery, while her husband (played by Jesse Plemmons) only seems to view her with scorn as she and the other women are carted off to Iowa.

Despite the frankness with which Jones depicts the women's suffering, the approach often leaves any understanding of their characters missing. Otto and Gummer employ a similar level of non-intensity, often staring at some far-off place with a look that verges on catatonic. Meanwhile, Richter, whose experiences seem to have been the most physically traumatic, goes full Gollum for most of the picture, lashing out and biting at anyone foolish enough to come hear her, or screeching and wailing for what seems to be hours on end.

By the time a small council is convened in Loup – consisting of the women's three husbands, Cuddy, and John Lithgow as Reverend Alfred Dowd – it is clear Cuddy will be the one driving the women back to Iowa, where they will be cared for by the church. Knowing she cannot embark on the journey alone, Cuddy employs a claim jumper named George Briggs (Jones), whom she freed from a lynching and further entices with the promise of $300 upon the safe delivery of the women.

From there, the film becomes a classic road story, the beats of which are delivered in alternating shots of the vast plains, dramatically presented by cinematographer Rodrigo Prieto  ('Brokeback Mountain'), and a series of archetypal, increasingly symbolic encounters with both the living and the dead. Along the way, Cuddy and Briggs run into a sore-faced drifter, played by Tim Blake Nelson, a potentially violent band of Native Americans, and increasingly harsh conditions that naturally serve to paint a fuller picture of Briggs and his relationship with Cuddy and the three women.

To his credit, Jones allows Briggs to steal the occasional scene, but mostly builds the story on the foundation set by Swank's superbly measured performance. The film is largely unconcerned with sentimentality and neither are its two stars. While Jones plays it surly but sweet, Swank varies more in her role, switching from hardened pragmatist and taskmaster, to palpable loneliness, to utterly vulnerable so quickly and assuredly that an unanticipated change in the direction and perspective of the narrative, late in the film, hits with astonishing force.

Still, try as he might to suggest otherwise with a strong late-in-the-game cameo by Meryl Streep, the altered direction of 'The Homesman' ultimately makes it Jones' show. Even if it doesn't quite deliver the kind of women-driven story hinted at in the beginning, the film manages to depict the harsh, unforgiving nature of the American frontier in a way that is as startlingly beautiful to look at, as it is occasionally difficult to watch. 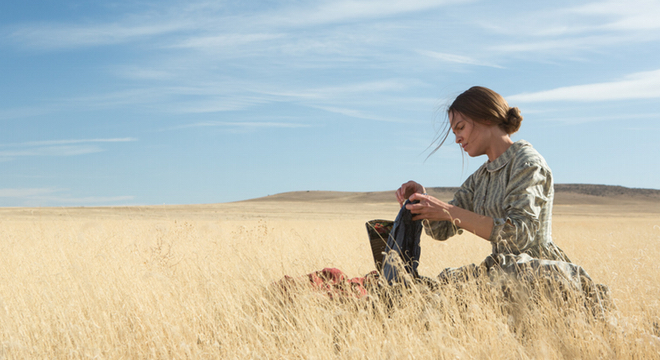 'The Homesman' comes from Lionsgate as a single 50GB Blu-ray disc + HD Digital Download. The disc comes in the standard keepcase with a cardboard sleeve depicting the same artwork as the insert. There are a handful of previews ahead of the top menu, which the user has the option to skip one at a time. The menu allows the user to choose from a few subtitle options, and a handful of featurettes about the making of the film.

Although it looks outstanding for much of the film's run, delivering a gorgeous picture that highlights Prieto's astonishing cinematography, the picture is occasionally marred by instances of banding that don't ruin the image outright, but do transform an otherwise reference-quality image into one that is merely great looking at times.

For the most part, the film unfolds during the day, allowing the image to be bright and crisp, with high levels of detail, strong edges, and brilliant depth in a way that is simply striking. Fine detail is present in close and wide shots, revealing the smallest of lines in the actors' faces. Jones is particularly striking, as his weathered visage perfectly suits the character and every small line on his face is captured in all its glory. Textures in clothing and other elements like the wood of the wagon in which the women travel and the domiciles seen in the early parts of the film are accentuated nicely.

Colors and contrast during the day are excellent. Whites are never overblown or look too hot, while shadows offer nice delineation and often reach a superb level of inkiness. Color is bright and vivid. Though mostly consisting of earth tones and shades of brown, the palette of the film seems more diverse than maybe it really is.

During one nighttime scene in particular, the transfer delivers such a disappointing example of banding that the emotional integrity of the scene is all but lost. The scene unfolds with Swank winding up lost after choosing to stay behind to tend to a child's desecrated grave. When night falls, the sky behind her is a series of rings, all varying shades of deep blue that not only distracts from the story, but also wipes the scene of any semblance of detail whatsoever.

Thankfully, the film is able to recover and even delivers the final shot – which also takes place at night – with a much better level of delineation. Overall, the good outweighs the bad, but it takes what might have been a reference-level disc down a notch.

Dialogue is strong from start to finish, with the actors all being easily heard and even throughout. The dialogue is balanced nicely with the score, as most of Beltrami's influence is depicted during moments of silence, when the film is showcasing the scenery more so than the performances. There is also a strong sense of atmospheric sound, as the whipping wind of the plains adds to the chill being depicted by the visuals. Small elements also contribute to the immersive quality of the audio. The wagon's omnipresent creaking and squeaking is matched only by the ubiquity of the Richter's mournful wails emanating from inside. The occasional gunshot rings out with great clarity, while the sound of horses galloping across the plains land with terrific thuds.

All in all, this is a very nice sounding mix that transforms this film into a more atmospheric experience than you might expect. Aside from a few instances where heavier elements tend to fall flat, this disc offers superb audio.

Origins (HD, 21 min.) -- The producers writers and actors all discuss the various elements of the film from screenplay to the vision of the film to its preparation and how it was finally shot.

Shooting the Film (HD, 27 min.) - Starting where the other feature it left off this look into how the film was shot explores the difficulties of shooting a Western and the rigors of being exposed to the elements in almost every scene.

Beyond the Western (HD, 12 min.) - Tommy Lee Jones, the actors, and producers express their thoughts on what defines Western film and what tropes and expectation of the genre are important and unimportant when making one.

Tommy Lee Jones directs and stars in 'The Homesman'.  The film revisits many of the same elements and themes as his previous theatrical directing effort,'The Three Burials of Melquiades Estrada'. With excellent video, exceptional audio, and some worthwhile extras, this Blu-ray is recommended.