Blu-ray: Worth a Look
N/A Stars out of 5 In New Mexico, looking for his son's murderer, Ben Kane takes a deputy marshal's job and runs into young Billy Young who's on the lam.

Before the Revisionist Western movement kicked into high gear, it felt like it was okay for rough and tough Westerns to have a sense of humor. The story could be serious, usually involving stakes that involve life and death, but they still had a sly silliness to them. Directed by Burt Kennedy and starring Robert Mitchum, 1969's 'Young Billy Young' is a film that works to balance the two conflicting presentations of the Old West. While working as a routine revenge thriller 'Young Billy Young' also works to keep the tone light and entertaining. The results rest somewhere between 'Cat Ballou' and 'Man With The Gun.'

Peace is the ideal life for Ben Kane. Even as a former Dodge City lawman he never wanted a fight to arrive on his doorstep and he never went out looking for one. But after the murder of his son, peace eludes the man until the offer to become the new Sheriff of the wild town of Lordsburg presents itself. At first Ben doesn't want the job, but when he learns that Frank Boone (John Anderson), the man responsible for the murder of Men's son resides there, the job of taming a tough town looks a bit more appealing although he'll have his work cut out for him. The odds begin to shift in Ben's favor after meeting Billy Young (Robert Walker Jr.) who is on the lam after he was involved in the assassination of a despot Mexican general. Billy got left behind by his partner who just so happens to be Frank Boone's son Jesse (David Carradine).

Once in Lordsburg, Ben begins to see how tough of a job he has ahead of him. Frank Boone and his partner John Behan (Jack Kelly) have the town locked up tighter than a drum with thieves, cattlemen, and murderers. As bad as the town looks for Ben, the scenery improves dramatically when local working girl Lily Beloit (Angie Dickinson) makes Ben's acquaintance. She may be Behan's girl, but her heart slowly begins to belong to Ben. When Jesse kills Doc Cushman (Willis Bouchey), Ben has the leverage he needs to bring Frank to him in a square fight. Only a square fight isn't what he gets at all.

With Behan's cash and Frank's gumption, an army of no-good bad guys have their rifles pointed straight at Ben's jailhouse. Seeing the best way to clear things, Billy free's Jesse hoping to put the fight to rest - only things don't work out according to plan. Without Jesse in the jail, Frank, Behan, and their army of toughs are free to do as they will. The only chance either Ben or Billy have to survive the day is by fighting their way out of a deadly trap. 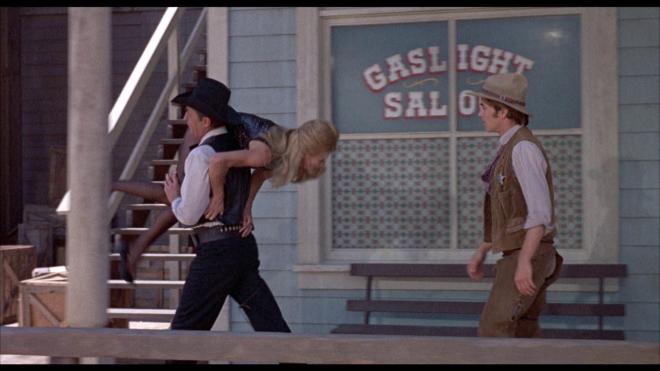 'Young Billy Young' is a fun and entertaining Western/Adventure film. If you expect the film to play things completely straight, you may be a bit disappointed. If you expect the tone of the film to always remain light and fun, you may also be a bit disappointed. As a blend of both, the movie works more often than not. Part of where the film's tone can throw some people off is the frequent flashbacks to the dark and stormy night where Ben's young son was murdered by Frank Boone. These sequences look and sound almost exactly like the flashbacks of Col. Mortimer from 'For a Few Dollars More.' These tonal shifts didn't bother me all that much when the story as a whole is a consistent rousing adventure.

Robert Mitchum does the best version of his traditional tough guy that also shows how adept he is at tossing off a good quip. He's even on hand to sing the film's title song. Angie Dickinson plays her Lily Beloit with the same spunk that she brought to her part in 'Rio Bravo' and she's a welcome addition to the cast. Robert Walker Jr. does right in the role of the titular Young Billy Young. He's experienced as a gunfighter yet naive in the ways things actually work in the world. It's a nice dynamic to see and it works as a counterweight to Mitchum's experienced lawman. David Carradine brings a wily edge to his role as Jesse, even if he doesn't get much screen time.

While the story of 'Young Billy Young' may crib some elements of the Wyatt Earp legend in a similar fashion as 'Man With The Gun,' the movie has a nice lightheartedness to it. Some of the lightness that also plays well to the film's darker tones is the score by Shelly Manne. Manne appears to be borrowing some notes from Ennio Morricone by using some strange note progressions and an interesting assortment of instruments. It may sound odd at first, but when the action kicks in, in particular, during the film's big climactic gun battle, the music fits the scenes perfectly.

'Young Billy Young' may not reinvent the genre, but then again, it never needed to. At a breezy 89 minutes, the film plays loose and groovy and only gets a little bogged down in some backstory beats that are established and then reestablished a couple more times. That retreading of story elements is my only real negative mark. For a movie that sets out to entertain an audience, I'm glad to say that it does just that. It may not be the greatest Western ever made, but it gets the job done and should leave genre fans happy.

'Young Billy Young' arrives on Blu-ray thanks to Kino Lorber through their Studio Classics line. Pressed onto a Region A locked BD25 disc and housed in a standard case, The disc opens directly to the main menu.

'Young Billy Young' makes a nice jump to HD with a strong and stable 1.85:1 1080p transfer. This is a very bright and colorful movie with nice vivid primaries that pop off the screen beautifully. Film grain is intact offering strong detail levels that allow you to appreciate facial features as well as the costuming and set design work. Black levels are nice and inky throughout most of the film, a couple of night shots dip into crush and turn a couple people into floating heads, but these moments are very brief. The print is in fine shape, only some slight speckling here and there is even noticeable. It does look like some edge enhancement has been employed as some edges can look a bit crunchy at times and some of the patterned clothing can show some slight banding. Overall this is a pretty decent transfer with only some slight problem spots.

'Young Billy Young' gets a decent English DTS-HD MA 2.0 audio track. For starters, the film's title song comes through with great clarity and the film's music maintains a strong presence. Dialogue, for the most part, is crisp and clear and easily heard, but there are a few spots throughout the film where it seemed oddly difficult to hear what was being said by any given actor. These very brief moments were the only time that I had to adjust my volume levels. The rest of the track is lively and resonant as the sound effects and music have plenty of space and keep to the midranges. Imaging is pretty strong with a nice sense of channel movement.

Young Billy Young Trailer: (HD 2:15) The trailer does a great job of selling the action and making it look like a fun film to enjoy - which it is.

Support Your Local Sheriff Trailer: (HD 3:03) This looks like a fun Western with a sense of humor, at least that's what the trailer makes it out to be. James Garner is always a welcome sight in a Western.

Support Your Local Gunfighter Trailer: (HD 2:45) A sequel/companion film to 'Support Your Local Sheriff' the film looks to maintain the same sense of goofy humor also featuring James Garner in the lead role but apparently as a different character.

The Wonderful Country  Trailer: (HD 2:56) There's something fun about the way movies used to be marketed, this trailer does a great job of making the movie look fun however it does show a lot of the film's major events so spoilers beware.

'Young Billy Young' may not be a great Western, nor is it the best appearance from Robert Mitchum in the genre, but it's a solid and serviceable piece of entertainment. Kino Lorber has pulled together a solid disc featuring a strong A/V presentation. The disc only offers some trailers for extra features, but even with that in mind one should consider this Blu-ray release as worth a look. It may not be a movie for every Western fan, but I found it to be perfectly enjoyable and a fun watch.