After the death of Victor Frankenstein (Dennis Price), two figures vie for control of his metallic-skinned monster (Fernando Bilbao) and the radical technology that created him: the scientist's daughter, Vera (Beatriz Savón), and the immortal wizard Cagliostro (Howard Vernon), who is assisted by a blind bird-woman with an unquenchable thirst for blood (Anne Libert).

The one thing Jesús Franco proves with his eccentrically wacky 'The Erotic Rites of Frankenstein' is that he can — and most assuredly will — surprise moviegoers with the freakishly strange and gonzo lengths he will go to restyle familiar horror archetypes into objects of eroticism. You know, just in case anyone had any doubts of his talent for altering almost anything horror related, no matter how unsexy it at first may appear, into something sensual and perverse. This is the same man, after all, who unapologetically turned zombies into lewd monsters and went full risqué with the slasher formula. Is it any surprise, then, that at one point in his career he also stuck his depraved, pervy meathooks into the venerable, legendary icon of the genre, revamping the acclaimed classic tale into a bonkers story with secret satanic societies, demonic rituals involving sex and a seductive half-bird, half-woman creature. And that's only scratching at the surface of a plot that imagines a crazed, bug-eyed cult leader (Howard Vernon at his weirdest and most peculiar) who wants the silvery gray monster for mating and creating a master race of the dead.

Obviously, Franco's script doesn't resemble Mary Shelley's influential novel — in fact, I'm not even sure the infamous Euro-sleaze filmmaker ever read it — outside of using the Frankenstein name and the premise of a scientist reanimating a corpse. But like the creature of the book, the movie is a jumbled, oddball medley of offbeat personalities and a collision of goofy ideas bouncing off one another. This is Franco's own monster, a nonsensical tale that lacks direction and seems to clumsily stumble unto a conclusion in frustrating grunts while angrily waving its fists in the air. And amazingly, this confusing mess is a fun watch because the shoestring production is riddled with unintentional comedy, much of which comes from the way Franco justifies scenes of gratuitous nudity. If it's not a pair of buck naked women being dragged out a room by a zombie-like manservant, then it's two stripped people tirelessly whipped until one falls onto giant metal thorns or Frankenstein's monster turns voyeur as a woman (Britt Nichols) undresses in front an open window. It's one bit of silliness followed by another, and it can be a riot. 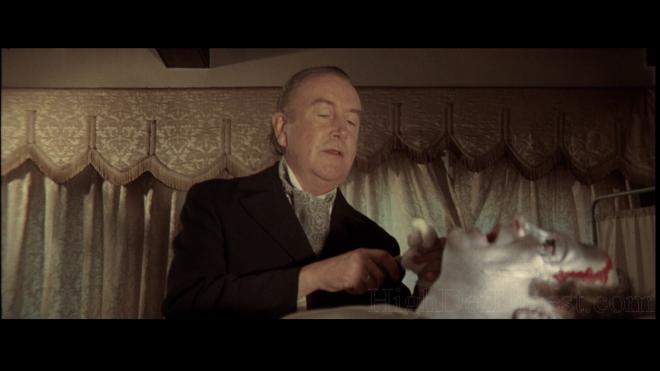 Of course, there is nothing deliberately funny in the movie or meant in any way to tickle the viewers' funny bone. But immediately, it opens with a bizarre sequence of Dr. Frankenstein (Dennis Price) and his loyal assistant Morpho (Franco) in the middle of reviving a dead body when they are attacked by the aforementioned manservant (Luis Barboo) and the bird woman (Anne Libert). From the start, Franco drastically departs from the novel by having the doctor and henchman killed, switching the focus to Vernon's Cagliostro and the monster (Fernando Bilbao covered in glittery metallic paint that goes completely unexplained). For the first half of the story, actions and motives are never divulged or discussed, which admittedly creates an air of mystery to an otherwise seemingly aimless plot. However, a host of amateur camerawork and techniques litter the screen, from ineffectual closeups and pointless scenes that linger to choppy, incoherent editing and store-bought makeup. The most creative aspect of the production comes from the late cinematographer of many Spanish horror favorites, Raúl Artigot.

And much like appreciating the film's photography, even on some miniscule level, there are other little bits of cleverness worth savoring in Jesús Franco's 'The Erotic Rites of Frankenstein,' which is also known as 'The Curse of Frankenstein' in other parts of Europe and as 'La maldición de Frankenstein' in its original 94-minute cut. (Only the French 74-minute version is offered on this Blu-ray.) Granted, the notorious filmmaker of cult Euro-sleaze and exploitation cinema is an acquired taste dependent on the individual's penchant for these types of movies, but Franco has his moments when attempting to make familiar genres his own. The plot features the doctor's voluptuous daughter (Beatriz Savón) as one of the main characters, a scientist herself who only wishes to solve the mystery behind her father's death. Taking a page from the 1950s sci-fi horror formula, she is aided by local physician Dr. Seward (Alberto Dalbés), apparently the smartest man in town because he recruits the help of an ineffective detective out of necessity. The movie is far from Franco's best — if that's even possible — but it's a wacky display of gonzo, hilariously outlandish ideas mixed into a pot of absurdity stew that still satisfies.

Kino Classics brings 'The Devil Bat' to Blu-ray on a Region Free, BD25 disc inside the standard blue keepcase. At startup, viewers are taken directly to a static main menu with music.

Frankenstein's monster hunts for young virginal flesh with an average but also disappointing AVC-encoded transfer, likely made from the best available elements. However, the source has not aged well as the video is often littered with a variety of thick, glaring scratches, whites specks everywhere and flecks of dirt.

The whole presentation comes with that dreary yellowish hue that comes with age, and it doesn't help that contrast is terribly flat, sadly making everything look faded and dull. Although whites are lacking, black levels are surprisingly strong and deep with only a few moments of shadows looking faint and muddy. Even though much of the photography favors brown earth tones, the overall palette is lackluster and drab with only reds occasionally providing small hints of life. The video is nicely defined and detailed, revealing some visible texture in the clothing and faces of the cast, but a good number of sequences are blurry and poorly resolved. Originally shot on the 2-perf Techniscope negative, the 2.35:1 image also comes with an attractive thin layer of grain throughout.

Cagliostro's bizarre collection of oddities and spooky freaks gather for rituals of horror with a pleasing enough uncompressed linear PCM mono soundtrack. Coming in slightly better than the video, the track isn't without its minor drawbacks.

For the most part, dynamic range is clean with appreciable distinction, clarity and amusing presence, but overall imaging also feels restricted and narrow down the center of the screen with only the music occasionally widening the soundstage. There isn't much activity in the upper frequencies, yet the lossless mix can suddenly increase in volume and come off noticeably bright with a hint of ever-so mild distortion. Hissing and popping in the background is sporadic but quite audible during several sequences. Low bass is surprisingly hearty and ample, providing the score with some weight and personality. The ADR work is often distractingly apparent, but also understandable given the budget and origins of the production. Nevertheless, dialogue is intelligible throughout, making for a passable track.

With his eccentrically wacky 'The Erotic Rites of Frankenstein,' Jesús Franco proves he'll go to freakishly strange and gonzo lengths to surprise audiences, restyling familiar horror archetypes into objects of eroticism, no matter how unsexy they at first may appear. Although the movie is a nonsensical tale that lacks direction and seems to clumsily stumble unto a conclusion in frustrating grunts, the notorious filmmaker of cult Euro-sleaze and exploitation cinema manages an unintentionally funny low-budget flick. The Blu-ray arrives with a generally pleasing audio and video upgrade, but it's still a comparatively average, rough around the edges presentation. Though terribly lacking in bonus material, the overall package is one for the fans of Franco and the subgenre.

Sale Price 23.49
List Price 29.95
Buy Now
3rd Party 18
In Stock.
See what people are saying about this story or others
See Comments in Forum
Previous Next
Pre-Orders
Tomorrow's latest releases