As the body-count genre stabbed its way into audiences hearts in the early 80s, EuroTrash auteur Jess Franco (Sadomania, Mansion Of The Living Dead) was asked to create his own saga of slaughtered schoolgirls complete with gratuitous nudity, graphic violence, and gory set pieces. But just when you thought you'd seen it all, Franco shocked the world by delivering surprising style, genuine suspense and a cavalcade of depravity that includes incest, voyeurism and roller disco. The luscious Olivia Pascal of Vanessa fame stars in this twisted thriller that was banned in England yet is now presented uncut and uncensored including the complete stone mill power saw sequence -for the first time ever on Blu-ray!

Like any other Jesús Franco feature, the enjoyment level of 'Bloody Moon' will largely depend on the viewer's fondness for the director's other works and tolerance for his particular brand of shoestring productions. There is really no point in denying that this well-known filmmaker of cult Euro-sleaze and exploitation cinema is an acquired taste. Either you'll appreciate his unintentionally funny attempts at elevating the risqué and lewd with artistic panache or scratch your head in stupefied amazement at the obscene, crude displays of incompetence. Amazingly, his continued following and cult status comes more from the former than the latter: those entertained by what he tried to do, not by what he actually end up with. Franco doesn't really fall in the "so bad, it's good" category. He's just altogether bad with little splatters of intelligence buried deep within.

However, the Spanish-born filmmaker has also been known to make a few minor hits — by which I mean, a couple of his movies actually generated some money — like 'The Awful Dr. Orloff,' 'Necronomicon' and 'Count Dracula' with Christopher Lee. In that same vein, he's made attempts to produce more commercially viable projects, material that tapped into the film zeitgeist of the period, such as a pair of zombie flicks and one cannibal feature. Sadly, they turned out so bad they now rank as some of the worst ever made. This 1981 German production sits pretty somewhere between box-office potential and just plain bad, showing all the makings of a very familiar, easy-to-follow formula but spoiled by hilariously awful dialogue and acting. Set in an international boarding school located in an exotic Spanish resort, the script by Erich Tomek ('Contamination,' 'The Story of Linda') is basically the European version of the "slasher" film.

With that in mind, and from the perspective of what the filmmakers were aiming for, there funnily exists a small shimmer of joy and delight is what is otherwise absolute rubbish. By strictly adhering to the formula, Franco and his team inadvertently and incidentally deconstruct the genre itself while at the same time adding a bit of European flair. We have our requisite group of lustful, raunchy, naughty teenagers, except they all look well into their 20s, and the obligatory virginal "Final Girl" in Angela (Olivia Pascal). The difference is these kids are exaggerated stereotypes seen in movies like 'Halloween (1978)' and 'Friday the 13th (1980),' as they are overly sexed and constantly wanting to party. Franco's contribution to the genre is the stylish mystery thriller of the giallo, as demonstrated by the camerawork and ultimately by the plot itself. The storyline really goes out of its way to convince audiences the masked killer is the horribly-scarred Miguel (Alexander Waechter) when the truth is more malicious. 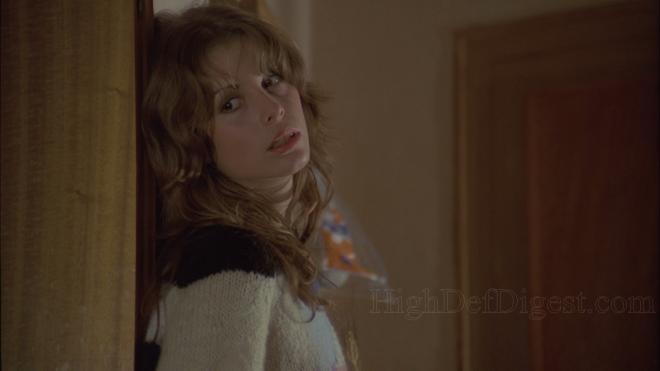 Like the typical "slasher," the filmmakers pay particularly close attention to making 'Bloody Moon' as gruesomely gory and explicitly violent as possible, which lead to it earning an X-rating and eventually being banned in the United Kingdom. Not discounting the shock of seeing a brave kid run over by a car or a pair of scissors sadistically protruding from a woman's nipple, the Franco cult favorite is probably best known for the circular saw beheading scene, which even by today's standards remains outrageous and appalling. The editing is fluid and impressive while the special makeup effects are pretty amazing for such a limited production. Added to this, the mystery is surprisingly engaging, keeping viewers guessing of the killer's identity and the motives, while Franco actually manages to create a few bits of eerie suspense. On one hand, it's a shame such potential is lost beneath the laughable dialogue, awful acting, and terrible dubbing. But on the other hand, it's all part of the overall, unintentionally funny charm of 'Bloody Moon.'

Severin Films brings 'Bloody Moon' to Blu-ray on a Region Free, BD25 disc housed in a blue eco-elite case. The disc goes straight to the main menu at startup with music and full-motion clips.

Franco's sleazy "slasher" shocks on Blu-ray with an amazingly good 1080p/AVC MPEG-4 encode that brings every explicitly gory scene into vivid detail. The elements used for this new master are in excellent shape. Fine lines and objects are quite sharp and revealing with great texture on various fabrics of clothing and the facial complexions of actors, especially during close-ups. The 1.78:1 image comes with plenty of visibility and clarity in the far distance, and the color palette is richly saturated with vibrant, beautifully-rendered primaries. Contrast is comfortably bright with crisp whites while black levels appear true with strong shadow delineation. Granted, a couple sequences show their age with the occasional splatter of white specks, poor resolution and vertical lines, but overall, the high-def transfer is excellent.

Sadly, Severin offers the cult shocker with only one audio option: the rather corny and at times funny English dub. Thankfully, the uncompressed PCM mono soundtrack is pretty much equal to the video and makes a very fine addition to the overall presentation. With a weighty, broad presence, imaging is welcoming and highly engaging, surprisingly active with satisfying, convincing off-screen effects. Dynamic range is fairly extensive for a movie of this vintage and production value with clean, crisp separation between the mids and highs. Low bass is mostly average but adequate for a source over thirty years old, and vocals are precise and intelligible throughout in the center, making this a very strong lossless mix.

Like any other Jesús Franco feature, the enjoyment level of 'Bloody Moon' will largely depend on the viewer's fondness for the director's other works and tolerance for his particular brand of shoestring productions. By strictly adhering to the formula, Franco and his team inadvertently deconstruct the genre itself while at the same time adding a bit of European flair. The Blu-ray arrives with shockingly excellent picture quality and very good audio presentation, but only one amusing supplement. The overall package will please Franco fans and enthusiasts of exploitation cinema, while others might not care either way.

Sale Price 27.97
List Price 29.95
Buy Now
3rd Party 59.95
In Stock.
See what people are saying about this story or others
See Comments in Forum
Previous Next
Pre-Orders
Tomorrow's latest releases