An unstoppable terror is set loose upon a nation divided… and history will never be the same!

After a failed attempt to propose to his girlfriend, Alan Jones (Jordan Farris) is beaten within an inch of his life by a street gang. Transported to the mysterious lab of Dr. Tanner Finski and his kid genius assistant Igor, Alan becomes the subject in a series of horrible experiments as part of the doctor's plan to reanimate the legendary Frankenstein monster. But all bets are off when these experiments lead to a hole being ripped in space and time, pulling an army's worth of the infamous creatures from hundreds of parallel universes and sending them all back to the 19th century – directly into the heart of a bloody battle between the North and South!

An over-the-top sci-fi/horror hybrid, Army Of Frankensteins is an outrageous film that dares to examine a history that never happened: The War Between The States… of Life and Death.

Hilariously shoddy, with wince-inducing, horribly bad acting all around, 'Army of Frankensteins' is the furthest from the action-packed, enthralling war feature the title would imply. That is, if one were gullible enough to think the title were any indication of the film's possibilities and potential quality, such as one credulous viewer — who, ahem, will remain nameless — silly enough to hope for the best when sitting down to watch this dreadfully horrendous piece of micro-budgeted cinema. This production is simply, hands-down terribly bad, as in, there's little to nothing in it worth defending, especially when most all of the special effects look like the product of some recent computer-programming graduate without any experience in filmmaking working off the cheapest laptop he could afford. While the editing is surprisingly fluid and smooth, except for a few obvious hiccups here and there, a majority of the production looks as though it were filmed inside the basement of someone's supportive mother with green curtains hanging all around and then composited with whatever random stock footage was found from the click of a Google search.

But amazingly, and to my genuine shock, this is precisely the movie's charm. The premise alone is already laughably absurd and cockamamie, going so far as crediting Mary Shelley for characters not ever mentioned in her massively influential novel. Other than the concept of reanimating a corpse constructed from the parts of other dead bodies, of course. From a story by the film's director Ryan Bellgardt, the plot, which Bellgardt also co-wrote with Josh McKamie and Andy Swanson, features a small platoon of Frankenstein's monsters accidentally traveling back in time towards the tail end of the Civil War, which essentially fantasizes the North winning the conflict with the help of the seminal monster. Granted, for fans of the original Gothic romantic novel and the nameless Creature himself, the seeing the idea played out onscreen is worth the price admission alone, and for the most part, it is. However, the movie is littered with various inaccuracies and presumptions of mid-19th century culture, which can distract. But then again, who in their right mind would watch something as silly as this for a lesson on U.S. history. 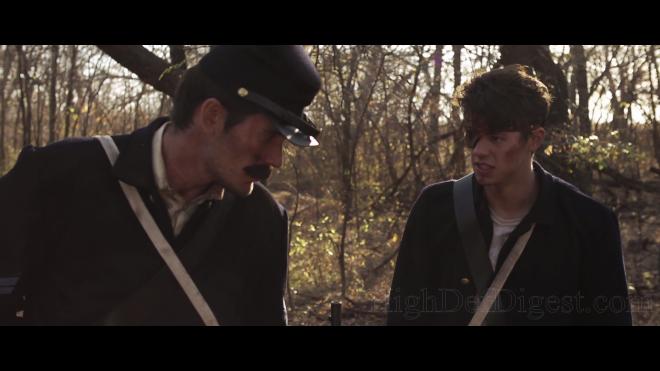 Nevertheless, the production, which was shot in and around Oklahoma City, manages to entertain for one simple but rather charming reason. It's plain awful, almost painfully, embarrassingly bad to watch because the intended bits of comedy don't register as well its unintentionally funny moments. The movie is more a sci-fi adventure than horror, so what I mean by unintentional is the several scenes of serious action and drama which are a riot and completely hysterical to watch, much of which is due to amateur performances from a cast of neophytes. Jordan Farris plays a recently fired grocery store employee who unwittingly ripped a portal in the space fabric, sucking him, the monster copies and Christian Bellgardt as Igor back in time. Farris's bumbling yet arrogant Alan stumbles into a love triangle involving his great-great-great-great grandparents, a plot detail time-traveling fans will immediately recognize. Eric Gesecus plays the Creature with animated grunts and silly murmurs, but the real hilarity is the terrible CGI making it as though there were a dozen of him while the gore effects are a mix cartoonish and shockingly good.

Although it wouldn't exactly fall in the "so bad, it's good" camp, 'Army of Frankensteins' still manages to entertain due to its badness, even though several moments are less pleasurable than others and might induce small bouts of yawning in some audiences. What makes a terrible movie such as this still fun to watch is the filmmakers' genuine approach to the project, a sorely lacking element that makes pieces of idiocy like 'Sharknado 3' complete garbage and not in the least bit entertaining. There is nothing amusing or enjoyable about a self-aware movie intentionally set to be bad from its inception. It's the real sincerity and authentic ambition behind the movie, which can be seen as well as felt in the production, that makes it fun. At one point, the plot even touches on paradoxes and certain historical events still required for the future to exist. That aspiration for making a good movie that unexpectedly turns out awful is its charm, and the same goes for this micro production. There were high hopes involved, not necessarily to become a major box-office success or winning any major awards, but the end result hysterically feels like a school project made with friends and local actors admirable doing the best they can to make movie magic.

Shout! Factory brings 'Army of Frankensteins' to Blu-ray on a Region A locked, BD25 disc housed inside a blue, eco-elite case and cardboard slipcover. At startup, viewers are taken to a static screen with music and the usual collection of menu options along the bottom.

The monster invasion takes place on the Blu-ray battlefield with a perfectly capable yet rather bland looking 1080p/AVC MPEG-4 encode. Shot on HD cameras, the presentation comes with a sterile and much too digital appearance, lacking any texture even though it shows a great deal of dimensionality. Admittedly, the video is clean and consistent, but it's also very plain, humdrum and doesn't have any character, as in there isn't any creativity in the cinematography.

Nonetheless, contrast is pitch-perfect and very well-balanced, showing crisp, brilliant whites throughout. On the other hand, black levels waver from scene to scene, spot-on and true one minute with surprisingly excellent differentiation between the different shades and gradations but somewhat dull and faded in other moments, most notably during nighttime sequences. On the plus side, primaries are sparkling and dynamic, animating every scene with life and glowing intensity, while the softer hues lavish the screen with equal vibrancy. The 2.35:1 image also shows razor-sharp details and superb clarity into the far distance, exposing fine texture in the fabric of clothing and revealing every pore and minor blemish in the faces of actors, but the cheap-looking special effects sequences lose much of that distinct definition, bringing the high-def transfer's overall quality down a few notches.

On the audio side of things, Scream Factory brings the monster to life with a pair of not-so electrifying DTS-HD MA soundtracks, one in stereo while the other in 5.1 surround sound. Either choice makes for a pleasing enough listen, but the overall design is similar to the video, in that they get the job done and are perfectly capable but are still pretty bland and plain.

Imaging is decently wide and welcoming with strong channel separation and movement, but there's little to no distinction in the mid-range. Again, like the video, the entire lossless mix lacks character, exhibiting a rather even and uniform presentation, and dialogue reproduction is noticeably flat and monotonous with voices often seeming distant and detached from the on-screen action. On the other hand, low bass is surprisingly authoritative during several action sequences and provides the musical score with some appreciable depth. Then, there are the ambient effects spreading into the rear speakers, competently expanding the soundfield with discrete effects that pan between channels with pleasing effectiveness. On the other hand, many of those same moments also sound artificial and forced, making several of them easy to localize while drawing much too attention to themselves.

Other than the original trailer, this is a barebones release.

Hilariously shoddy, with wince-inducing, horribly bad acting all around, 'Army of Frankensteins' is the furthest from the action-packed, enthralling war feature the title would imply. Nevertheless, the production, which was shot in and around Oklahoma City, manages to entertain and charm due to its badness and hysterical awful CG special effects. The Blu-ray arrives with a squeaky clean yet very average digital audio and video presentation, and the lack of supplements makes this package at most a decent rental.

Sale Price 4.44
List Price 14
Buy Now
3rd Party 15.1
In Stock.
See what people are saying about this story or others
See Comments in Forum
Previous Next
Pre-Orders
Tomorrow's latest releases