When a mass of Sharknadoes threatens America’s East Coast, chainsaw-wielding hero Fin must again risk his life to save his children on spring break. But as he fights his way south, the sharknadoes merge and grow bigger than ever before.

Some movies raise the bar, some movies lower the bar. This is the natural order of filmmaking. There are just some movies that get made that are expected to make the audience think about what they're seeing and perhaps in the process get the audience to think about the life they're leading or the world around them. Others don't have such lofty ambitions and are made to entertain. Then you have a third category of movies. These movies don't raise the bar or lower the bar, but in fact, take the audience to the bar and the film becomes that strange guy you don't know that orders everyone drinks. You don't want another drink, but since they're buying you're going to take it anyway. The 'Sharknado' movies are the movies that take you to the bar. They're just dumb fun and 'Sharknado 3: Oh Hell No!' sticks to the established mold while providing ample amounts of complete and utter shark-chomping lunacy to enjoy!

Sharknados just keep happening. No matter where dedicated chainsaw-wielding-shark-killer Fin Shepard (Ian Ziering) goes, another deadly Sharknado is sure to be close behind. Just when Fin is supposed to get a medal from the President of the United States (Mark Cuban), another pesky Sharknado drops down on Washington DC destroying the Capital as well as The White House as sharks munch on a few senators and the press. Fin barely escapes only to learn that this particular Sharknado was just the beginning of a much larger event. And wouldn't you know it? Fin's pregnant wife with chainsaw cybernetic hand April (Tara Reid), their daughter Claudia (Ryan Newman), and April's mother May (Bo Derek) are in Florida for spring break! Not only is there one Sharknado on the horizon, but there are three of them, and they're forming together to create one massive Sharkicane that will devastate the entire east coast if nothing is done to stop it. If Fin's going to save the day again, he's going to need some help from dear old retired astronaut dad, Gilbert (David Hasselhoff) and the rest of the team at NASA!

So normally it is at about this point that I would be starting the second paragraph of my traditional two to three paragraph summation review structure before diving into my reaction to the movie, but I'm not going to do that. It's just not worth the time, effort, and the strain on my mind grapes to thoroughly analyze a 'Sharknado' movie's key plot points beat for beat. You should have a pretty solid idea what you're getting yourself into long before you've even cracked the cellophane on this Blu-ray release. 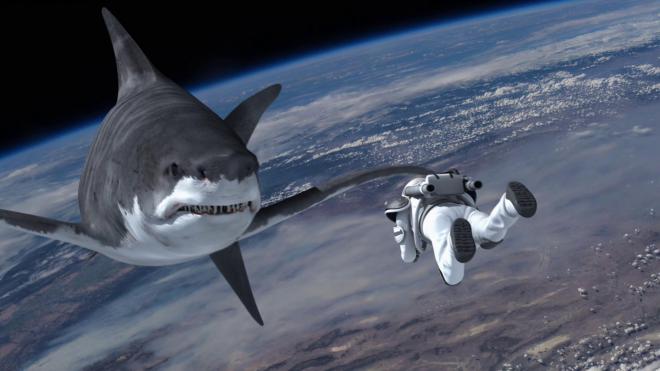 What keeps these movies swimming is the fact they're filled with an abundance of energy and are just good fun. They're not meant to be thought about, they're meant to be devoured. If you plan on watching this one alone, you're losing half of the fun. You need some friends, some pizza, and maybe a few beers. 'Sharknado 3: Oh Hell No!' isn't a groundbreaking entry in the series thus far, this show is pretty fairly routine now so the joy comes from watching how they try to up the already topped off ridiculous factor.

After the wild successes of 'Sharknado,' 'Sharknado 2: The Second One' and their respective Rifftrax Live! event shows, this series is 100% self-aware to the point that you're either going to love it, or be turned off by it to the point of hating it. In my case, I ended up putting my feet up and just went with it, if for no other reason than to spot the cameos. When you have guys like Mark Cuban, the entire cast of NBC's 'The Today Show' as well as names like Bo Derek, Frankie Muniz, Lou Ferrigno, Lorenzo Lamas, Bill Engvall, Jackie Collins, Jerry Springer, Michael Bolten, Penn and Teller, with former Presidential candidate Michelle Bachmann topped off by having conservative political commentator Ann Coulter playing the Vice President of the United States, the 'Sharknado' movies have devolved into a parade of recognizable faces who will undoubtedly face a particularly gruesome demise by a CGI shark and digital blood effects - and it's worth it! You're either going to roll your eyes in irritation, or you're going to scream with glee. I suggest you aim for the latter response, it's more fun.

It is almost impossible to scale (hehe, get it?) these three 'Sharknado' films. You can't easily say one film is better than the other when they're purposely made to be as bad as they are. If I had to judge them, I wouldn't dare judge them against another series of movies unless it was something from the more recent output of Roger Corman or in general, the films of The Asylum. All you can easily do is judge them against each other. To that end, I still think 'Sharknado 2' is the best of them so far, but 'Sharknado 3: Oh Hell No!' comes pretty close. I mean, where else are you going to see sharks in space? We'll just have to wait until next summer for 'Sharknado 4' to arrive to find out!

'Sharknado 3: Oh Hell No!' arrives on Blu-ray thanks to The Asylum and is pressed onto a Region A locked BD25 disc. Housed in a standard case, the disc opens to an animated main menu.

To be blunt, it's actually rather difficult to judge the picture quality of a Blu-ray release for a movie that is designed to look relatively crappy. Because it's supposed to look this way, 'Sharknado 3: Oh Hell No' stays afloat with a strong 1.78:1 1080p transfer. Because of the cool stormy coloring, primaries only really pop when the action is closer to Florida and the sun is out. For those scenes, the colors look rich and natural and flesh tones look healthy. When the movie is in the thick of a Sharknado attack, colors shift to a sickly gray tone. Details, for the most par,t are pretty good, they look better when there isn't any kind of CGI effect at play. When the film's digital effects kick in the image can appear quite hazy with plenty of motion blur and become noticeably flatter. That isn't exactly a bad thing either. A lot of the charm and fun of these movies comes from the fact that they don't look like well-polished pieces of cinema. They're supposed to look gritty, unfinished and overall just bad. To that effect, this transfer does the film's intended visual style a lot of justice!

With a punchy and powerful DTS-HD MA 5.1 audio track, 'Sharknado 3: Oh Hell No!' gets a big kick out of its auditory presence. On top of the in your face visuals, the 'Sharknado' movies are all about the squishy and explosive sound effects and this track delivers the goods. Every whoosh of violent wind, every rev of a chainsaw, every nasty chomp packs a powerful punch that keeps the surrounds constantly engaged. Dialogue pretty much sticks to the front and center channels leaving the fun stuff to sides and rear channels. Imaging is a real pleasure here as there is constantly something happening on screen and the audio movies about the channels to delicious effect. For the most part, everything keeps to the midranges, but there is very little down time or quiet moments for this film so pretty much the entire thing is a flurry of sounds. Thankfully the track is well balanced and you won't have any trouble hearing the cheesy dialogue - not that you'd actually really miss an important detail if that did happen!

Audio Commentary: So this commentary track is a lot of fun. Director Anthony C. Ferrante, writer Thunder Levin (I wish I was named "Thunder!"), along with members of the visual effects team take at explaining just what the hell we all saw! It's funny, but also informative - especially if you're an independent filmmaker looking to create a look on a budget. I love how they're able to explain this movie like it was thought out to be exactly this random and weird.

Feeding Frenzy: An Exclusive Look at the Sharknado Documentary: (HD 1:45) This is more of a recap than anything. A series of random bits from the previous movie's highlights.

Shark Tails: Alternate Endings: (HD 3:23) A couple of different endings that were considered but never finished with introductions by Director Anthony C. Ferrante.

Lights, Camera, Sharks: The Making of Sharknado 3: (HD 12:43) Your tried and true standard behind the scenes featurette, with cast and crew interviews and set footage of everyone having a great time making the movie.

Growing Pains: The Evolution of Sharknado VFX: (HD 4:41) Given the conditions the digital artists have to work under, it's amazing 'Sharknado 3: Oh Hell No!' looks as good as it does! They work hard and very, very fast.

The Asylum VFX: Before & After: (HD 2:10) A very quick look at some of the visual effects from filming to completion.

Bite Marks: Famous Faces in Sharknado 3: Oh Hell No!: In case you missed some of the cameos and celebrities that popped up throughout, here's your chance for a quick recap!

Archie vs. Sharknado: (HD 5:46) A look at a comic book that I should probably add to my pull list at my local shop!

A Stormy Romance: A Sharknado Love Story: (HD 5:17) A goofy look back at the romantic ups and downs of April and Fin's relationship together.

Making The Soundtrack: (HD 8:26) Musician Robbie Rist along with director Anthony C. Ferrante as well as other musicians and music supervisors discuss the film's soundtrack.

Shark Chum: Extended Scenes: (HD 14:25) Director Anthony C. Ferrante introduces these clips of scene extensions and cut material, for 14 minutes worth of content not a lot of amazing stuff was lost. This is truly trimmed fat.

The Asylum Trailers: All of the trailers for films that Asylum has in the pipeline for release in the very near future including Flight WWII, Feeding Frenzy, 3 Headed Shark Attack, Road Wars, MegaShark VS Kolossus, San Andreas Quake, Avengers Grimm.

Three 'Sharknado' movies down and this franchise of canned Cheese Whiz shows no signs of slowing down. 'Sharknado 3: Oh Hell No!' may not be the best of the bunch thus far, but it's a heck of a lot of fun, and if you've got the right group of friends hanging around the house, it's perfect party entertainment material! Go have some fun and enjoy this Blu-ray from The Asylum. The A/V presentation is perfect for what this movie is and it comes with a wide assortment of extra features to devour, I'm calling this one recommended.

Sale Price 9.9
Buy Now
3rd Party 4.81
In Stock.
See what people are saying about this story or others
See Comments in Forum
Previous Next
Pre-Orders
Tomorrow's latest releases