Romina Power (18-year-old-daughter of Tyrone Power) stars as Justine, a nubile young virgin cast out of a French orphanage and thrust into a depraved world of prostitution, predatory lesbians, a fugitive murderess (Mercedes McCambridge), bondage, branding, and one supremely sadistic monk (an outrageous performance by Jack Palance). It's a twisted tale of strange desires, perverse pleasures and the ultimate corruption of innocence as told by the Marquis de Sade.

When a filmmaker decides to mount a major motion picture production of the works of Marquis de Sade, you're almost obligated to question the filmmaker's motive. Is the filmmaker motivated to bring de Sade's stories of extreme sexual behavior and violence to the screen to serve the prurient interests or are they using the material to serve as a cautionary allegory? In simpler terms, are they motivated to create a work like Pasolini's 'Salò, or the 120 Days of Sodom,' or are they more interested in achieving something in tune with Roger Vadim's 'Vice and Virtue' when adapting de Sade? Director Jess Franco took a more comical approach with his adaptation of 'Marquis de Sade's Justine'

As Marquis de Sade (Klaus Kinski) sits in a prison cell, he is wracked by powerful erotic fantasies. His wicked desires and imagination bring him visions of two young sisters, the innocent brunet Justine (Romina Power) and her sultry blonde sister Juliette (Maria Rohm). The only way for de Sade to overcome these powerful visions is to commit pen to paper and see where the lives of the two girls travel. Justine and Juliette have lived their lives in a convent receiving the best possible education, but when their father dies without leaving an endowment for their educations, the two girls are cast out into the streets.

Juliette, knowing the value of her beauty and sexuality, takes a position as a prostitute, allowing men with the right amount of money to do as they will with her. Justine, on the other hand, is a chaste young girl and shuns a life of sin and depravity - even when the most depraved elements of society seem to be drawn to her. Justine loses the last of her money and is forced to become a servant girl at an inn. Her beautiful and expensive green dress is taken from her and she's made to wear a simple smock that just barely keeps her otherwise nude body covered while she works.

When Justine refuses the sexual advances of a guest, she's set up as a thief, thrown in prison, and condemned to death, thus beginning her odyssey into a seedy and salacious underworld. After meeting the gregarious Madame Dubois (Mercedes McCambridge), Justine escapes from prison and travels the countryside landing in the arms of an evil baroness and her husband, she finds shelter in the arms of a handsome artist, and winds up the captive of a sexual cult lead by the depraved Antonin (Jack Palance). Can Justine's virtue and riotousness withstand the brutal onslaught that only a mind belonging to that of Marquis de Sade can concoct? 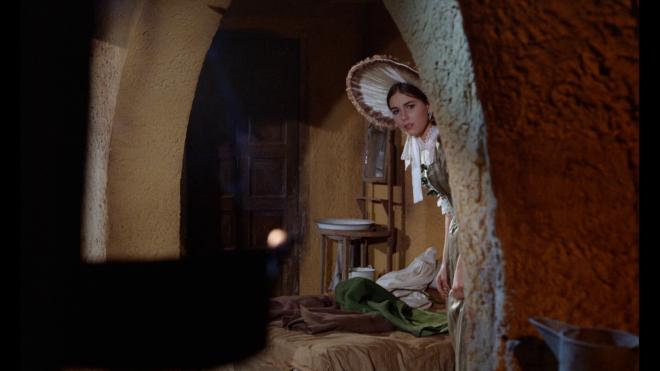 While 'Marquis de Sade's Justine' is most certainly a film that features copious amounts of nudity, it isn't actually all that depraved a film. In fact, the tone is more bawdy than anything. While Justine travels the French countryside and is thrown into any number of compromising positions, the film is actually remarkably restrained - especially when you consider it's a film that has been adapted and directed by Jess Franco. Those expecting something more akin to the director's other more debouch works may be a bit let down. Considering its literary source, the film is very tame by comparison.

At the center of the picture is Romina Power - the daughter of the legendary Zorro actor Tyrone Power - as Justine. Just 18 years old when this film was made, Romina Power may be comfortable with some of the more revealing aspects of the material, but she's hardly a believable innocent. In fact, the way she plays Justine, the character comes off as more stupid than innocent. I suppose that's by intent given the comedic nature of the rest of the film, but after awhile you start to get tired of the act. On the flip side, we have Maria Rohm as Juliette. Rohm appears far more comfortable with the material - even though she doesn't have much to do and only appears sporadically. When one makes it through a viewing of this movie, it becomes clear that the real stars of the film are guest actors like Mercedes McCambridge and Jack Palance. These two great actors play their parts so over the top that it's hard not to love their presence. Had the film not offered Jack going full Palance or let Miss McCambridge play a sultry madame with her gravely 'Exorcist' voice, 'Marquis de Sade's Justine' would have ended up becoming a monotonous bore. Then you have the odd appearance of Klaus Kinski as the enigmatic Marquis de Sade. The usually dominating and frightening actor is silent in this role and only passively roams around his tiny prison cell set like a cat stuck on a rooftop. It's an odd appearance by the actor and only serves to put the film into the context of one man's strange fantasy.

Is 'Marquis de Sade's Justine' a good movie? No, not really. Terms like good or bad are tough to apply to any film that aims to adapt a work from one of the most depraved minds to ever put pen to paper. Is this an entertaining movie? At the very least I will say that it is, only because the film maintains a goofiness that is easy to enjoy. In terms of plot and story structure, not so much. This is a movie that is designed to appeal to a select few and even then those few people may not be entirely satisfied with it. If you're in the mood for a bawdy sexy film with a bit of action and adventure, I'd suggest you take in 'The Wicked Lady' before this one. Those who want a more on point adaptation of de Sade may want to look towards Jess Franco's 1970 film 'Eugenie.'

'Marquis de Sade's Justine' arrives on Blu-ray thanks to Blue Underground and is pressed onto a BD50 disc. Housed in a clear 3-disc Blu-ray case with reversible cover artwork, a DVD of the film is included along with a CD featuring the score composed by Bruno Nicolai. Also included is a booklet featuring stills from the film, poster art, as well as a fantastic essay by Stephen Thrower. The Blu-ray opens directly to the film's animated main menu.

'Marquis de Sade's Justine' is given a fresh 4k transfer from the original camera negatives and the results for this 1.66:1 1080p presentation are impressive. Fine film grain has been retained throughout leading to incredible detail levels. For a period film, the 17th century costuming and architecture, as well as the hair and makeup work, is given real life and presence. Colors are rich, warm, and beautiful throughout providing plenty of primary pop with deep reds and greens and sharp blues. Flesh tones can appear a bit pink at times, but that could also be due to some of the purple-toned lighting used throughout a lot of the more salacious sequences. There are a few moments where the camera goes out of focus, this isn't a fault of the transfer but a method of maintaining "objectionable" content within the film and bypassing the censorship boards. Black levels are inky and deep providing the right amount of shadow separation to give the image a notable sense of three-dimensional depth without any troublesome crush issues worth mentioning. The elements used in this transfer were clearly well taken care of as there isn't a nick, scratch, or any speckling worth mentioning. The only speckling to be seen appears during the opening credits and quickly disappears after they're finished. Without any problematic compression issues to speak of, it's easy to say that 'Marquis de Sade's Justine' makes a flawless transition to Blu-ray.

'Marquis de Sade's Justine' features a strong and wonderfully resonant and preserved DTS-HD MA 1.0 track. The audio fidelity of this track is pretty impressive considering the age of the film as well as the shooting limitations. it's quite clear that a number of the actors and sound effects were added in during post production as there is a bit of a "canned" quality to them, but the rich layering of the dialogue, sound effects, and Bruno Nicolai's beautiful score come together nicely. Sometimes the score can overpower the rest of the audio elements, but not in a distracting way. The music is so overly-dramatic that it actually works for the tone of this movie. Free of any age-related anomalies or hiss effects, dialogue comes through crystal clear - that is when you can get past some of the ridiculous faux French accents on display. Given it's production style, the audio for 'Marquis de Sade's Justine' doesn't offer up much in the way of imaging or directional movement as the audio is very front/center loaded - to that end, the sound still retains an authentic vibrancy for how this film was likely presented during its initial release over 45 years ago. Levels are well balanced as the track keeps to the midranges and you shouldn't have any need to monitor your volume.

The Perils and Pleasures of Justine: (HD 19:59) Director Jess Franco and producer Harry Alan Towers  discuss the making of the film. It's actually a really interesting piece of behind the scenes material as it discusses this Spanish/French/Italian production and how the film had to work around censorship as well as shooting in Spain and using famous monuments for sets in the film.

Stephen Thrower On Justine: (HD 17:32) Stephen Thrower, the author of Murderous Passions: The Delirious Cinema Of Jess Franco discusses the history of the film, the production, and release. Pretty fascinating stuff because his position is from the outside looking in so Thrower offers a lot of valuable insight into the film as well as Franco's and Tower's relationship.

French Trailer: (HD 3:46) Even if you don't speak French, you get the idea of what this movie is all about from this rather long preview.

Poster & Still Gallery: (HD 1:09) A Collection of the various posters and marketing materials that were created for the marketing of the film.

'Marquis de Sade's Justine' is one of those movies that the taste of the viewer is going to determine the enjoyability of the film. If you're up for a comedic, more bawdy sense of salacious adventure, you should have a great time with 'Marquis de Sade's Justine.' If you're more in line for an erotic fantasy picture as some of Jess Franco's other works tend to fall into, this one may not quite be what you're after. Blue Underground has done a fabulous job bringing 'Marquis de Sade's Justine' to Blu-ray offering a first-rate 4k image transfer as well as a top-notch audio track with a few decent worthwhile extra features. For those interested in the works of Jess Franco, consider this Blu-ray release highly recommended, all others should proceed with caution and consider it worth a look.

Sale Price 39.94
List Price 41.99
Buy Now
3rd Party 29.74
In Stock.
See what people are saying about this story or others
See Comments in Forum
Previous Next
Pre-Orders
Tomorrow's latest releases