Taking a piece of public domain literature is a solid way to add a bit of legitimacy to any film production. Add the name "Poe" or "Shakespeare" to the title of a film - even if it is an extremely loose adaptation - you give the film a sense of respectability. But what if you add the name "Marques de Sade" to the film's title? While de Sade is an important literary figure, his works aren't ones that you would normally see adorning a movie house marquee and not expect a certain amount of skepticism towards the film's content and nature. Director Jess Franco brings de Sade's 'Eugenie' to movie screens starring the late great Christopher Lee. While being a contemporary adaptation, this is a film that fully embraces de Sade's unique content tastes with somewhat uneven results.

The young and innocent Eugenie (Marie Liljedahl) is on a weekend vacation to a secluded island with her friend Madame Saint Ange (Maria Rohm) and her brother Mirvel (Jack Taylor). As the two siblings both desire the young woman sexually, they conspire devious means to strip Eugenie of her innocence and induct her into their sex and pleasure-obsessed cult. By spiking her wine and lacing her cigarettes with narcotics, Ange and Mirvel systematically break down Eugenie's will. Gradually she begins to accept the pleasure found from giving in to sexual desires, but when pleasure leads to murder, Eugenie's dream-like vacation into the world of sin turns into a nightmare. With the arrival of the leader of the cult, Dolmance (Christopher Lee), Eugenie may not survive to repent her wayward path into debauchery.

That may be a very brief and uncomplicated recap of the film, but 'Eugenie' isn't very complicated to say the least. As far as adaptations of a work by de Sade go, 'Eugenie' isn't too bad - if this is your sort of movie. It follows the basic premise of the original text fairly well - almost to a detriment of the final product. Those looking for a dramatic film that explores the seduction of innocence may well be disappointed by this film as would those looking for a raunchy skin flick. 'Eugenie' rests somewhere in between those two genres and the mixed results make the film itself tough to recommend. Like the actual work by de Sade, there just isn't much in the way of a genuine story to be found here. The film quickly becomes repetitive and the last act appearance of the legendary 'Dracula' actor Christopher Lee is almost too little too late to salvage any interest in the film. 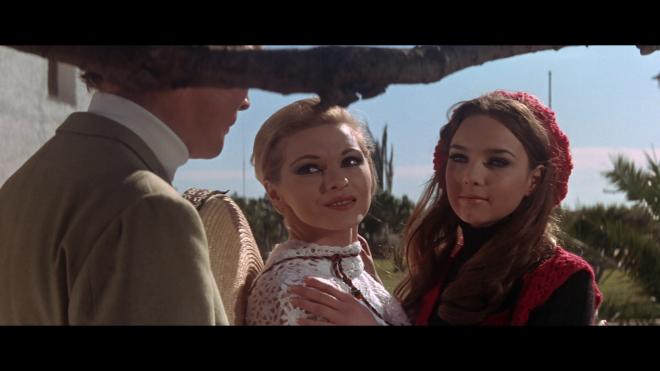 Performances are also tough to grade here as the totality of each actor's contribution can be summed up by their physical appearance. Maria Rohm brings an element of depraved menace to her role, but when joined with Jack Taylor's Mirvel, their seductive enterprises slide into camp. The film isn't dramatically satisfying, it doesn't really serve as a cautionary story, nor does it fall into the arena of bawdy fun as Jess Franco's earlier de Sade adaptation 'Marquis de Sade's Justine' fell into. It's also being too blunt to describe the film as a simple excuse to show beautiful women with their clothes off either. You can feel Franco trying for the more horror film aspects of the story in a way that he achieved with 'The Sadistic Baron Von Klaus,' but the final product of this film falls short due to the repetitive nature of the first two-thirds of the film.

This isn't to say that 'Eugenie' is a terrible film by any stretch, it is just one of those movies that will only appeal to a very select audience. While I don't have a problem with depictions of salacious content, it does get rather boring for me when it's the only thing happening for most of the film. Perhaps that's the real problem with most adaptations of de Sade's work, the repetition, and less the reputation. Had this film held something back, had it eased into the nightmarish world concocted by de Sade, this could have been something interesting and maybe even a little frightening. As it is, I found 'Eugenie' to be a beautifully shot but bland film - save for the ending of the film. The ending is a solid gut puncher, but again, the rest of the movie doesn't quite make it a satisfying finish.

'Eugenie' arrives on Blu-ray courtesy of Blue Underground and is pressed onto a BD50 disc. Housed in a clear 3-disc Blu-ray case with reversible cover artwork, a DVD of the film is included along with a CD featuring the score composed by Bruno Nicolai. Also included is a booklet featuring stills from the film, poster art, as well as a fantastic essay by Stephen Thrower. The Blu-ray opens directly to the film's animated main menu.

Like 'Marquis de Sade's Justine,' 'Eugenie' arrives on Blu-ray with a freshly restored 2.35:1 1080p 4k transfer. Film grain is retained throughout offering up strong detail levels. Colors are bold and bright with strong reds, deep blues, and earthy greens. For the dream sequences and some of the more salacious moments, the image color was graded to be completely red. This effect, while intentional, diminishes a lot of clarity and the finer details. Black levels are very strong throughout the film providing a notable sense of depth to the image without any crush issues to speak of. Likewise, contrast is under control without any blooms or unintentional softness to the image. An issue that people need to be aware of is the frequent use of purposefully blurred focus throughout the film. This was done in order to skirt some of the more strict censorship guidelines as was done for 'Marquis de Sade's Justine,' however in 'Eugenie' it is used far more frequently. There are also several sequences where the camera pans and it doesn't appear that a focus puller had been employed as the actors will routinely go in and out of focus. Again, this is indicative of the negative elements and not a transfer problem - I thought it worth noting due to its prevalence. Beyond some slight speckling here and there, the image is nearly flawless.

'Eugenie' features a strong DTS-HD MA 1.0 track that serves the nature of the film very well. Like 'Marquis de Sade's Justine,' the mono presentation doesn't offer up a whole lot of dynamic range and limits imaging effects, but considering the amount of post-production dubbing, this audio track remains faithful to the film's original presentation. Dialogue is clear and clean and is never an issue to hear - although at times there is some distortion when someone speaks. Sound effects, while canned, maintain a strong presence throughout as does Bruno Nicolai's playful score. Levels are well balanced throughout and there isn't any need to monitor volume. If there is an issue to be had with the clarity of this audio track it is that it draws more attention to the moments in the film where more post-production dubbing was added. Given it's low-budget origins this shouldn't be too surprising but it does become noticeably obvious. Thankfully Bruno Nicolai's music compensates for these shortcomings. All around this is a strong audio track that replicates the original presentation of the film, it just isn't one that will "wow" an audience.

Perversion Stories: (HD 17:30) Jess Franco, Harry Alan Towers, and stars Marie Liljedahl and Christopher Lee provide insights into the production, their thoughts on the film and what it was like making a film based on the work of Marques de Sade. It's a good bit of behind the scenes content.

Stephen Thrower on Eugenie: (HD 18:07) Stephen Thrower provides a lot of insight into the film and it's history as well as the relationship between director Jess Franco and producer Harry Alan Towers.

Poster & Still Gallery: (HD 2:13) A collection of poster art and marketing materials created for the film.

Taken as a whole 'Eugenie' probably isn't the best film out there, but it is also a strong indicator of the work of Jess Franco. As an adaptation of Marques de Sade, it's a bit hit or miss - largely due to the censorship of the time in which it was filmed, but also because it stayed a little too close to the original source material. Blue Underground has done a wonderful job assembling this Blu-ray set by including a DVD of the film as well as a CD featuring the score by Bruno Nicolai. The new 4k image is beautiful, and the audio track is good but limited by the condition of the source elements. If you're a Jess Franco completist you should be very happy with this Blu-ray release. If you're new to the director's works, it's best to give this one a rent first.

Sale Price 78.98
Buy Now
3rd Party 25
In Stock.
See what people are saying about this story or others
See Comments in Forum
Previous Next
Pre-Orders
Tomorrow's latest releases