Based on Veronica Roth's #1 New York Times best-selling novel Insurgent, The Divergent Series: Insurgent raises the stakes for Tris (Shailene Woodley) as she searches for answers and allies in this star-powered, action-packed second installment of the Divergent series. On the run and targeted by ruthless faction leader Jeanine (Kate Winslet), Tris fights to protect the people she loves, facing one impossible challenge after another as she and Four (Theo James) race to unlock the truth about the past—and ultimately the future—of their world.

'Insurgent' is the product of a new type of filmmaking that historically started with James Cameron's 'Titanic' but has been progressively worsening since the box-office giant that is the 'Twilight' series. It's a type directly targeted at a specific demographic and audience that more often than not guarantees high returns against its investment, essentially making it critic proof. And I'm not simply generalizing YA books adapted into movies, familiar stories with an established fanbase, because 'Ender's Game' and 'The Giver' didn't exactly satisfy expectations. Meanwhile, the 'Harry Potter' and 'Hunger Games' films successfully defy the discussion, but the 'Transformers' franchise and 'Fifty Shades of Grey' are further evidence of what I'm trying to arrive at. The larger issue at hand is a seemingly growing generation of moviegoers who care little for narrative quality or development and want it replaced with hyperbolic melodrama or amplified fantasy that feels like a thrill ride attraction. ('Jurassic World' also falls into this category of bad movies, so be warned of my future review.)

This second installment in the 'Divergent' franchise, based on the surprisingly popular books by Veronica Roth, picks up minutes after the first movie. Or, at least, that's what we are lead to believe. After Kate Winslet's voice, playing the leader of the Erudite faction Jeanine Matthews, is heard from a prominently displayed hologram message that insinuates a new totalitarian state, Tris (Shailene Woodley), Four (Theo James), Peter (Miles Teller) and Caleb (Ansel Elgort) are seen running out the woods to the Amity compound in the hopes of finding sanctuary. There, Tris is confronted with the bodies of those who've died for her. But we're soon given respite from this nightmarish scene when it turns out the entire sequence is, in fact, a nightmare from which Tris quickly awakens. In protest to her bad dreams, the young heroine decides to cut her hair short. It doesn't make any sense, but hey, what's the point of inciting a rebellion if you don't look good in the process. Besides, this dystopic future apparently still has access to a good hairstylist.

But let us not quibble over such silly details like who is Tris's barber with the talent of making blond highlights appear natural or how great it must be to live in a post-apocalyptic Chicago with mousse, hair gel and a blow dryer readily available. The larger issue at stake here is a movie and story practically littered with false promises, red herrings and MacGuffins. Sequences, like that gotcha opening, is not the only time the filmmakers pull the rug from under the audience with an emotional fake out. Director Robert Schwentke, who's given us a few respectable features along with the god-awful 'R.I.P.D.,' reverts to cheap tactics on several occasions, practically littering the entire the movie with such deceptive schemes. This only succeeds in negating the plot's emotional core — Tris dealing with the amount of violence and death surrounding her so-called specialness. We don't care or sympathize with the protagonist's dilemma because she can simply wake up at any given moment from a bad dream, rendering whatever internal conflict we just witnessed entirely moot. 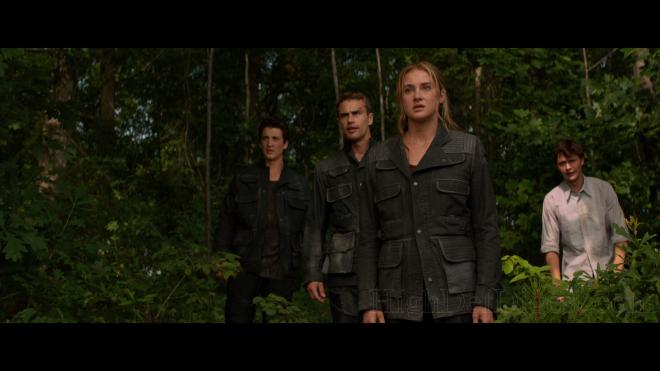 By the time we finally reach the moment when Tris performs the Sim trials, we're drained from the constant back and forth between reality and Tris's imagination. We get it; she needs help. But seriously, among the ruins of the city with an abundance of hairstylists, there isn't at least one therapist for treating the poor's girl obvious psychological issues. And if the first movie already failed to make any logical sense, the sequel amazingly expands on its illogical premise and frankly grows dumber. A mysterious box — designed by the same person who created Pinhead's puzzle box? — has been discovered, and of course, only one person can miraculously open it to expose a secret message from the founders of the five faction society. (The voice of Dana Carvey's Church Lady would appropriately interrupt here with her thoughts.) On top of this, we are made to contend with several senseless betrayals, absurdly contradictory double-crosses and characters being once angry with each other but soon forgotten without a single apology ever spoken or a reasonable conversation shared.

From a script by Brian Duffield, Mark Bomback ('Dawn of the Planet of the Apes') and producer Akiva Goldsman, 'Insurgent' is a terrible piece of motion picture entertainment that makes little to no logical sense with a cleverly disguised disdain and mistrust of intelligence and rational knowledge. And don't tell me it doesn't because — especially considering the author's public declaration of faith — we need only look at the plot's enemy: a group dedicated to the pursuit of intellectual understanding. Added to that, we have a story arc riddled with distractingly contrived coincidences and much-too-convenient plot devices to ever be believable or feel remotely authentic. Naomi Watts's character is arguably the biggest offender. And this is precisely the problem with this new type of filmmaking, which has become increasingly popular. As long as it looks pretty on the screen, the action is made overtly exciting and characters grossly melodramatic, narrative failures and the lack of logic goes ignored. An intelligent and genuinely gripping story is a thing of the past in the post-apocalyptic future, replaced by bigger, louder action and histrionics.

Summit and Lionsgate Home Entertainment bring 'The Divergent Series: Insurgent' to 3D Blu-ray as a three-disc combo pack with a flyer for an UltraViolet Digital Copy. Two Region A locked, BD50 discs — one with 3D version of the film and the other the 2D with special features — are joined by a DVD-9 copy of the movie and are together housed inside a blue, eco-elite case with a lenticular slipcover. After several skippable trailers, viewers are taken to a menu screen with full-motion clips and music.

The dystopian sequel incites a rebellion with a strong and generally pleasing 1080p/MVC MPEG-4 encode that was made from a 2D source. Although not natively filmed in 3D, the picture nonetheless offers plenty to admire as objects in the distance penetrate deep into the screen, creating a large sense of space. Extreme-wide shots in the outdoors are, of course, most impressive with far off buildings and vegetation seeming a long way away from characters in the forefront, giving viewers a good idea of how far some must travel. Several wide shot interiors also benefit from the post-conversion, such as the dinner exchange with Evelyn or when walking through the halls of Candor and Erudite, showing excellent separation between various objects and hallways feeling elongated. However, in spite of the many positives, several moments appear like pop-up book cutouts, lacking any roundness in the actor's faces, and intimate conversations suddenly go flat and noticeably dull.

Presented in a 2.40:1 aspect ratio, the presentation arrives with far more benefits for fans to enjoy, except for one area which weirdly has been affected by the 3D conversion. Black levels noticeably waver throughout between inky rich and murky, and it's not only during poorly-lit interiors where the oddness is made all the more apparent. Brightness also appears somewhat weak in many nighttime sequences, creating fairly dull and muddy shadows that obscure the finer details. Aside from that, the freshly-minted digital transfer displays outstanding definition and clarity of background information, showing every pebble on the road, every leaf and blade of grass, and the smallest hint of rust, flaw and imperfection on buildings. Individual hairs are distinct while the stitching, threading and fabric in the costumes are razor sharp, and healthy facial complexions reveal every pore, wrinkle and negligible blemish with lifelike textures.

Adding to the presentation's positives is a well-balanced and comfortably bright contrast. Whites are brilliant and crisp, making the picture pop, while visibility into the far distance is exceptional. Thanks to the remarkable photography of Florian Ballhaus, the palette is vivid and energetic with richly-saturated primaries and a colorful array of secondary hues that make each scene very pleasing to the eyes. Overall, the 3D rendering may not satisfy fans of the format, but it is pleasing for the most part.

In spite of Tris's efforts, her defiance against the system won't likely make any waves with this rather disappointing and frustrating Dolby Atmos soundtrack. But to be fair, it's not really her or the filmmaker's fault the audio will infuriate early adopters because fingers point to Lionsgate's efforts against piracy and to deter owners from ripping the content to a home media computer. To start, the Playstation system will not play the Atmos track in conjunction with the 3D content, and it doesn't give the option of listening in Dolby TrueHD 7.1 as would be expected. Instead, viewers are forced to watch the movie in legacy Dolby Digital surround sound. When watching on the Oppo DBP-93 (don't know if the same problem occurs in the DBP-103), the studio's anti-piracy security measures create several annoying audio dropouts to the point of making it unwatchable, and the same goes for watching on the HTPC via a couple programs tested. It's enough of an issue to warrant a mediocre score.

On the more positive side, from what could be heard and enjoyed — which sadly, is only the Dolby Digital 5.1 track — the sound design is very promising. Imaging feels wide and expansive with lots of clear, flawless movement across the front soundstage, displaying terrifically well-balanced channel separation and very good off-screen effects. Dialogue is distinct and precise in the center with exceptional intonation in the voices during the most dramatic moments, allowing actors to really demonstrate their talents. There's plenty of excellent detailing and fidelity in the mid-range, exhibiting room-penetrating highs during loud action sequences and lots of warmth in the mids during the many melodramatic, often heated exchanges. Low bass is plentiful and responsive, providing depth and a hearty punch to both the music and action; however, it also sometimes feels a tad neutered and reserved because of the legacy audio codec. Rear activity is generally pleasing with several discrete, panning effects and subtle atmospherics which nicely expand the soundfield, but it will also leave listeners to imagine how much more immersive and three-dimensional it could be in Atmos to better complement the 3D video.

Available on the 2D Blu-ray only

'Insurgent,' the second installment in 'The Divergent Series,' is guilty of the same crime most sequels commit: going bigger and louder with less substance. However, the movie amazingly manages to go a step further with a narrative that's more nonsensical than the first cleverly disguising a disdain for intelligence and filled with grossly melodramatic characters. The 3D Blu-ray arrives with a rather average three-dimensional presentation and a frustratingly dissatisfying audio track. Even with an average assortment of supplements, the three-disc combo pack could possibly disappoint even the most hardened of devoted fans and may want to look at the 2D version as a more satisfying buying option.

Sale Price 14.79
List Price 39.99
Buy Now
3rd Party 10.95
In Stock.
See what people are saying about this story or others
See Comments in Forum
Previous Next
Pre-Orders
Tomorrow's latest releases