The Giver centers on Jonas (Brenton Thwaites), a young man who lives in a seemingly ideal, if colorless, world of conformity and contentment. Yet as he begins to spend time with The Giver (Jeff Bridges), who is the sole keeper of all the community’s memories, Jonas quickly begins to discover the dark and deadly truths of his community’s secret past. With this newfound power of knowledge, he realizes that the stakes are higher than imagined – a matter of life and death for himself and those he loves most. At extreme odds, Jonas knows that he must escape their world to protect them all – a challenge that no one has ever succeeded at before. The Giver is based on Lois Lowry’s beloved young adult novel of the same name, which was the winner of the 1994 Newbery Medal.

Much like last year's 'Ender's Game,' which failed to satisfy box-office expectations and the hopes for establishing yet another movie franchise, I imagine Phillip Noyce's 'The Giver' will go down as this year's underrated smart sci-fi drama. At a time when theater screens seem saturated with teen romances — some of which are of the dystopic variety, such as the mind-numbingly dull 'The Host' and the unnecessarily complex 'Divergent' — this surprisingly good and visually stylish adaptation of Lois Lowry's young adult novel is lost in the mire.

Understandably ignored by weary moviegoers who are probably by this point done with this particular subgenre, the film comes with its share of drawbacks and mishaps, but it should be given a chance nonetheless, as it touches on some very thoughtful aspects of human nature, the illusion of freedom and safety, and our deep, innate desire for self-preservation leading to unwise decisions.

Australian-born director of 'Patriot Games,' 'The Quiet American' and the exceptional 'Rabbit-Proof Fence,' Noyce turns in a visually beautiful, often remarkably stunning tale, one that for many may feel boringly familiar. And granted, the concept of a teen discovering and fighting an oppressive government system is arguably nothing new in the last few years — hats off to 'The Hunger Games' films for really popularizing the idea.

Amid the march and calling to arms, the would-be adolescent hero finds just enough time for romance, which eventually serves as a deeper personal motivator. However, seeing as how the original source material dates from 1993, an argument can be made that this story is essentially the forerunner, perhaps even the prototype, to what's now perceived as conventional. Then again, another argument is that this production is 20-years too late. 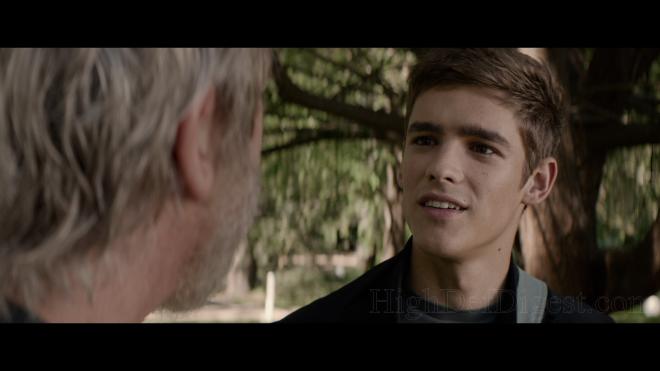 Nevertheless, Noyce and his team do what they can to make a familiar plotline still feel somewhat fresh and exciting, starting with the noteworthy photography of Ross Emery ('The Wolverine,' 'I, Frankenstein'). Besides, on a side note, we really can't ultimately blame the filmmakers for their lateness since the script has been stuck in development hell for the last couple 15 years. Anyhow, faithful to Lowry's novel, the film opens with our young protagonist Jonas (a willing Brenton Thwaites doing rather great in the lead) and the literally black-and-white reality of his existence, a future society free of our most dangerous base emotions like hate and jealousy.

It's a problematic sacrifice for the sake of a peaceful and seemingly successful civilization, controlled through daily medication and by the removal of history and memory of the past. The eager but gullible Jonas only starts seeing through the façade, represented by his suddenly regaining emotions, memories and seeing colors, when assigned the career of Receiver of Memory. His mentor is Jeff Bridges as the tired and lonely The Giver, a job which requires shouldering the weight of human tragedy.

This simple photographic technique actually works to make the film interesting and engaging enough to see it through, which also makes it rather unique and standout among several YA adaptations. The other characters are not only tragic victims that have succumbed to the larger lie, but they are also guardians and defenders of it, potential enemies to Jonas's quest of freeing them with the truth.

His best friend and love-interest Fiona (Odeya Rush) is the easiest to convince, but Jonas's parents (Alexander Skarsgård and Katie Holmes) prove to be a challenge. Meryl Streep's role as The Chief Elder is arguably the saddest because she's portrayed as the antagonist, the most vocal protector of this apathetic future, yet there's a shimmer of humanity in her eyes, as if voluntarily imprisoned by her dogmatic faith in the system. In fact, this battle of wits between her and the Receiver of Memory touches on moral challenges for preserving a society devoid of emotional judgments.

Admittedly, 'The Giver' ultimately never digs deep into the possibilities of these thought-provoking notions, which does work against its favor. Still, at time when screens are flooded with dull, conventional teen romances, Phillip Noyce's film is an underrated standout that shouldn't be erased from memory or forgotten to the cinematic pages of history.

Anchor Bay and The Weinstein Company bring 'The Giver' to Blu-ray as two-disc combo pack with a code for an UltraViolet Digital Copy. Housed inside a blue, eco-elite case and joined by a DVD-9 copy on the opposing panel, the Region A locked, BD50 disc commences with a couple skippable trailers before switching to a menu screen with full-motion clips and music playing in the background.

The teen dystopian drama receives a warm welcome on Blu-ray with a beautifully stylized but remarkable 1080p/AVC MPEG-4 encode. Faithful to the intentions of cinematographer Ross Emery, the movie commences completely drained of color, displaying a black-and-white picture with spot-on contrast and well-balanced brightness levels. As color is finally and a bit slowly introduced, the 2.39:1 image also brightens with lots of crisp, brilliant whites and deep, rich blacks, providing the frame with appreciable dimensionality. Into the second half of the film and in the memories, primaries are sumptuous and richly-saturated with accurate, full-bodied secondary hues and natural lifelike facial complexions. The high-def transfer is also exceptionally well-defined and revealing, exposing every nook and cranny within the dwellings, the distinct lines in every leaf and the pores in the faces of the cast.

Like the video, the audio is a stylized and deliberate aural experience meant to complement the narrative and visuals. The DTS-HD Master Audio soundtrack is true to those intentions, offering a terrifically satisfying soundscape that enjoyably expands as the plot grows more complicated. At the start, the film commences with a front-heavy design, but the image feels broad and expansive nonetheless, thanks to excellent channel separation and lots of subtle off-screen effects. Dialogue is crisp and precise in the center. As the story continues, atmospherics are employed in the rears with much understated presence and fantastic directionality. During the few actions scenes, panning is fluid and convincing, and a healthy low-end provides some hearty, pleasing-enough weight. The mid-range is extensive, exhibiting rich, detailed clarity in the music and outstanding acoustics that generate an immersive soundfield.

Based on the young adult novel by Lois Lowry, Phillip Noyce's 'The Giver' is a surprisingly well-made and beautifully stylized teen dystopic drama. Amid a flood of recent YA adaptations, the film will sadly go down as this year's underrated sci-fi flick deserving of a more appreciative audience. The Blu-ray arrives with near-reference video and an excellent audio presentation. With a relatively healthy collection of supplements, the overall package is recommended.

Sale Price 12.96
List Price 17.99
Buy Now
3rd Party 7.95
In Stock.
See what people are saying about this story or others
See Comments in Forum
Previous Next
Pre-Orders
Tomorrow's latest releases