Black & White: The Dawn of Assault

They're the last hope to save Harbour City — if they don't kill each other first.

When a maverick cop and a gangster headed for retirement team up, sparks will fly and heads will roll in Black & White: The Dawn of Assault! A big-screen prequel to the popular television series from Taiwan, The Dawn of Assault puts its own spin on the classic buddy cop formula with this outrageous actioner filled to the brim with over-the-top stunts, government conspiracies, and weapons of mass destruction.

Suspended detective Wu finds himself back in the thick of things when he crosses paths with Triad member Xu, who's looking to unload a stash of hot diamonds. When Xu's deal turns into a shoot-out and the diamonds go missing, the cop and the criminal reluctantly join forces to retrieve them. Before long they find themselves not only to be the hunters, but the hunted as their mission escalates into something bigger and more dangerous than they'd ever expected!

Action buddy comedies can be a tough venture to pull off. Movies in the 80s that were once unique like '48 Hours' became repetitive by the time 'Lethal Weapon 4' was released in the late 90s to becoming completely trite and irritating with 2015's 'Hot Pursuit.' Thankfully, in spite of some misfires, the genre still has some legs to it. The Hong Kong actioner 'Black & White: The Dawn of Assault' not only proves that the Buddy Cop Comedy Action genre still has some legs, but it also proves that the genre is locked, loaded, and ready to entertain an audience.

Detective Wu (Mark Chao) is a young, up and coming homicide investigator with a knack for putting the bad guys away. The only thing keeping Wu's star from rising higher is the tendency for mass destruction to follow him wherever he goes. After busting a bank heist and in the process drawing the ire of his lieutenant, Wu is placed on suspension from active duty. Even though Wu is forbidden from getting into any more trouble, that doesn't keep trouble from finding him in the form of inept Triad gangster Xu (Huang Bo).

Xu is a wanna-be bad guy. He's never really pulled off a big score, he's not really adept at handling firearms, and he rarely commands the respect of his bosses. With the chance to cash in on some stolen diamonds, Xu sees his way out of the Triads and into a life of luxurious early retirement. That is of course until some international bad guys need said diamonds in order to finance the purchase of some weapons of mass destruction. But rather than pay Xu's $2,000,000 price tag, these guys figure it's a better idea to bust up the sale with a volley of rockets and gunfire.

Ever being the wrong man in the wrong place at the wrong time, Wu inevitably finds himself on a crash course into Xu's botched sale. Unable to call in assistance without risking his career - or his own life, Wu must help Xu recover the diamonds in order to expose what amounts to an international government conspiracy. With trained commandos armed with machine guns and assault helicopters hunting them down, Wu and Xu are going to have to work together if they hope to survive - that is of course if they don't kill each other in the process. 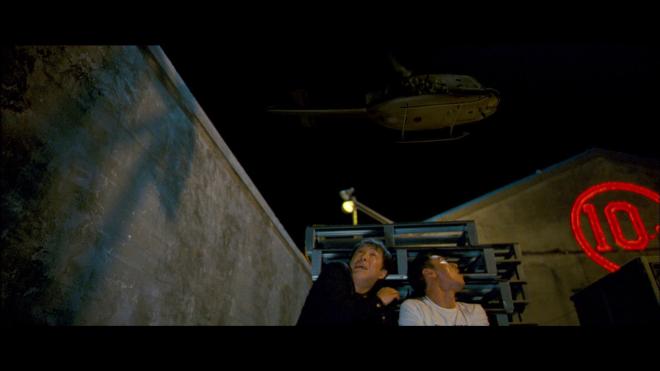 Perhaps the best way to describe 'Black & White: The Dawn of Assault' is as a combination of the best elements of 'Bad Boys' and 'Bad Boys II' with a dash of '48 Hours' for a little extra character flavor combined with the over-the-top action beats of John Woo's 'Hard Boiled.' To put it mildly, this isn't a movie you necessarily want to pick apart plot contrivances. You certainly can do that as this movie proves to be fairly low hanging fruit in that arena, but if you're going to do that you'll just spoil the good-natured fun this movie is having.

'Black & White: The Dawn of Assault' is a prequel movie that leads into the apparently incredibly popular Chinese action/thriller TV show 'Black & White.' While I have absolutely zero experience with that series, I can only imagine how fun it must be as evidenced by this movie. Directed by series creator Yueh-Hsun Tsai, the action is fast, brutal, over-the-top, and the movie is a joyful riot from start to finish.

While the action beats are thrilling and elaborate and appropriately explosive, it's the deadpan comedy that is the real star of the show here. Picture 'Abbott and Costello' as action heroes and you'll have a good idea of how Mark Chao and Huang Bo play off of each other. While Mark Chao is clearly the straight man of the bunch, nothing in this movie would be funny if it wasn't for the subtle comedic antics of Huang Bo. The guy plays an amiable lunkhead with an earnest sincerity that one can't help but find incredibly charming. Whether he's failing to defend himself or set off a fire alarm as a distraction, his form of comedy is always a welcome respite to the numerous car chases, gun battles, and death-defying explosions.

Since this movie is intended to work as a prequel to the series that ran for 24 episodes back in 2009, my hope is that this means the series is going to continue or at the very least that it might find its way stateside. After some searching, I was unable to locate either a domestic or international release of the series on Blu-ray. The movie is great on its own, but it left me wanting to see more of these characters and the wild situations they find themselves in. Fingers crossed that show somehow manages to find a stateside or at the very least a Region Free release!

'Black & White: The Dawn of Assault' arrives on Blu-ray thanks to Shout Factory. The movie is pressed onto a Region A locked BD50 disc and is housed in a standard case with slip cover. The disc opens directly to the main menu.

'Black & White: The Dawn of Assault' features a fairly impressive 2.35:1 1080p transfer. With film grain relatively intact, detail levels are consistent and nicely present throughout the film's run. Close-ups and middle shots offer up a lot to see and appreciate with facial features, costumes, and the impressive set design on full display. Colors are wildly bright with a lot of primary pop that also favors neons and some more exaggerated color tones. Thankfully flesh tones don't appear to have been tinkered with as everyone seems to have a healthy look about them. Black levels are richly inky and can offer up a fantastic sense of depth. However, the frequent use of CGI to buttress the intricate action sequences can tend to have a bit of a detrimental effect. At first I thought this may have been some loose DNR, but I'm leaning towards some less than stellar CGI blending as most of the movie's detail doesn't seem to be drastically affected. These sequences are often noticeably brighter and can have a tendency to flatten the image. Normally I wouldn't speak too negatively about an aspect like that but since there is so much of this sort of digital trickery on display it does get to be more than a bit distracting after awhile. At the end of the day this is a very good looking transfer that serves the wild and crazy nature of this film well, it's just those gosh darn CGI elements that bring this one down for me.

Working to bring all of the bombastic action to your home theater, 'Black & White: The Dawn of Assault' comes packed with a robust and effective Mandarin DTS-HD MA 5.1 audio track. Like any good action flick, imaging is the real star of the show as sound elements make frequent use of the surround channels. It's a great bit of fun when you feel like you have bullets zipping past your ears and explosions happening all around you. Dialogue is crystal clear and mostly keeps to the center/stereo channels. Levels are nicely balanced so that even when the movie goes from being calm, quiet, and conversational to rocket powered action with full guns blazing, you never feel like you need to adjust your volume controls. There is plenty of room around the elements so that dialogue remains present without any interference from the frequent sound effects or the thumping music score. A good action movie deserves a strong audio track and the Chinese language track delivers. The same, however, can not be said about the English dubbed DTS-HD MA 2.0 track. Like most dubbing efforts, the track sounds hollow and lifeless as none of the sound elements feel natural - so the less said about this the better. If you don't mind subtitles, the Mandarin track is the way to go.

Making of Black & White: The Dawn of Assault: (HD 7:11) A sadly very brief but fun behind the scenes look at the making of the film, and the work that went into executing the fight sequences.

Theatrical Trailer: (HD 2:58) A fun well-cut trailer that sells the movie without giving away the whole show or all of the best action moments.

Sometimes the best thing to watch when you need to relax, laugh, and put a smile on your face is a good Buddy Cop/Action flick. 'Black & White: The Dawn of Assault' delivers all of the fun that you can expect and leaves you wanting to see more from the main characters in the best ways possible. So what if the plot is ridiculous, you're there to have a good time remember? Image quality is strong but frequent CGI effects bring it down a notch, but the audio is absolutely fantastic. The only thing holding down my score for this Blu-ray release from Shout Factory is the lack of any real meaningful extra features. That said, I'm still calling this one as recommended. I had a lot of fun with this one.

Sale Price 20.65
Buy Now
3rd Party 18.98
In stock. Usually ships within 4 to 5 days.
See what people are saying about this story or others
See Comments in Forum
Previous Next
Pre-Orders
Tomorrow's latest releases