In Hot Pursuit, an uptight and by-the-book cop (Reese Witherspoon) tries to protect the sexy and outgoing widow (Sofía Vergara) of a drug boss as they race through Texas, pursued by crooked cops and murderous gunmen. The film is directed by Anne Fletcher (The Proposal) from a screenplay written by David Feeney (TV's New Girl) and John Quaintance (TV's Ben & Kate).

Bad comedies happen all the time. One could think that a particular premise with a unique cast would turn out to be cinematic and comedic gold, but every now and again the best-laid plans could turn out to be one of the biggest misfires. Sometimes a movie could be so bad, could be so painfully unfunny that one would be more than happy to watch something the likes of 'Paul Blart: Mall Cop 2.' 'Hot Pursuit' is just that sort of comedy. On the surface, a pseudo remake of 'Midnight Run' starring Reese Witherspoon and Sofia Vergara sounds like a decent enough idea, but the final product is so unfunny that it is absolutely painful to watch.

Dedicated police officer Cooper (Reese Witherspoon) has wanted to be a cop ever since she could remember. Her hero cop father used to take her along with him to work so Cooper got a taste for police action and an understanding of strict police procedure at a very young age. After her father died and she accidentally tasered and subsequently set fire to the Mayor's son, the fully grown Officer Cooper has been working the evidence counter. On top of the demotion in responsibilities, her love life isn't going anywhere fast because she scared off her last date (Mike Birbiglia) since she thought it would be funny to pull her gun out as an icebreaker - a clear display of how tone deaf she is to "human" behaviors.

As bad as things are for Cooper, things are about to pick up. With the upcoming trial of cartel boss Vicente Cortez (Joaquin Cosio), Cooper has been requested to ride along with Detective Jackson (Richard T. Jones) to escort an important witness Filipe Riva and his wife Daniella (Sofia Vergara) to Dallas so they can testify. Since Cooper and Jackson arrive early, they're just in time to be set upon by two groups of shooters - each trying to kill off Daniella and her husband. When Cooper is the only law enforcement officer left alive and Felipe dead, it's up to her to get Daniella to Dallas on her own - which proves to be a lot harder than it should be.

Since Cortez is a big time drug baddie, you'd naturally expect to learn that he has more than a few bent cops on his payroll as well as a few well-armed thugs who are willing to turn any public place into the old west in order to kill a target. On top of that, Cortez is able to spin Copper into a rogue cop-killer with the media putting every police officer in the state of Texas on the look out for the two women. With bullets zipping past them and Daniella's suitcase full of expensive designer shoes slowing them down, Cooper is going to have to rely on her training, and more importantly all of the police procedure lessons her father taught her in order for the two of them to reach Dallas alive. 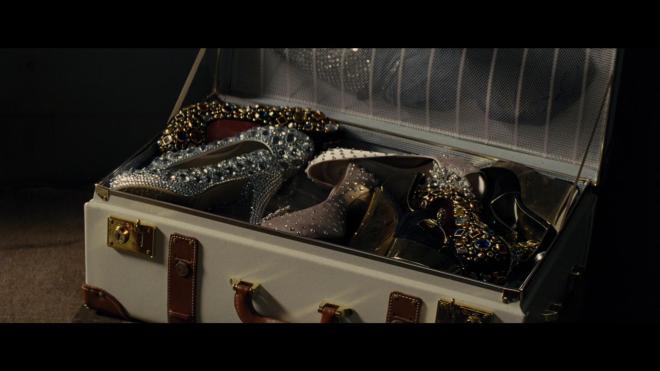 There is a host segment in one of my favorite episodes of 'MST3k' for the movie 'The Mole People' where Mike tries to impersonate a character and it doesn't go well. Crow and Servo ridicule Mike and his sad attempt at humor. The line that sticks out for me as I watched 'Hot Pursuit' is when Crow asks Mike "When am I supposed to laugh?" I asked that question a lot during this film. 'Hot Pursuit' is a sad attempt at being funny where the setups for jokes are seen a mile off and by the time they arrive, things are so awkwardly unfunny one has to resist shutting off the movie and ejecting the disc from the player. Among the many issues stalling any comedic momentum for this film are the miscast leads. Taken as individuals Reese Witherspoon and Sofia Vergara would be great in their roles, but put them together and they have zero chemistry. Since Witherspoon's uptight cop hijinks are already a sad source for attempted humor, that leaves Vergara to hold the "straight man" bag of being the foil for Witherspoon to play off of. The only problem with this setup is Vergara is made to be a source for a number of the jokes as a Spanish-speaking prima donna with a shoe obsession. Because of this, the jokes land with a resounding thud.

Now, I know with comedies - especially low-hanging fruit like 'Hot Pursuit' - it's a bit redundant and pointless to analyze plot or story structure, but at the same time, if there isn't a driving force to push the characters forward, there's no point in any of the jokes. While the idea of a need to be at a certain place at a certain time seems to be a provoking impetus to get our ladies on the road and therefore into one awkward mess after another, the rest of the movie feels entirely tacked on. Are there obvious plot twists? You bet. Are there more than a few clearly crooked cops who pretend to be their friends? Check. Considering how this movie opens with Mike Birbiglia running from a date, it's a virtual certainty that Cooper is going to meet up with some guy that digs her brand of procedurally obsessive personality, only this clandestine meeting is so undercooked it becomes pointless. As are most of the jokes. An entire ten minutes of this film's slim runtime is spent on Vergara trying to make out with Witherspoon so they can try and seduce an armed Jim Gaffigan who is only there to play a stereotyped redneck Texan that shoots himself when he sees two women start to make out, because...that's funny?

The presence of some talented comedians in bit roles leads me to my next point: 'Hot Pursuit' could have been a funny movie, and possibly may have been better if it featured Birbiglia and Gaffigan in the leads. This suggestion isn't meant to be a slight against Witherspoon or Vergara, it's merely an outcome of having these two comedic personalities be the source for the only truly genuine humor I found throughout the entire movie. After both comedians' parts had passed, I couldn't get the idea of Birbiglia as the neurotic cop and Gaffigan as the lumpy stubborn witness out of my head. One could work in Gaffigan's Hot Pockets and Waffle House jokes while Birbiglia could add some antics with his sleepwalking disorder and it would already be an infinitely funnier movie than what 'Hot Pursuit' currently is. I've had a long-standing point of view that if you're rewriting, editing, or recasting a movie in your head while you're watching it, it's a sign you're watching a really bad movie.

'Hot Pursuit' could have and should have been great. After the opening credits finish, the movie proves to be a strenuous 87-minute test of patience. When I first saw the trailer for this movie, I thought 'Midnight Run' with a couple ladies could prove to be a good time, sadly it didn't turn out that way. When so many good movies fail to get theatrical releases and are pushed straight to Blu-ray, it makes me wonder why this movie didn't get that same fate? I don't usually entirely side with critics or a Rotten Tomatoes score, but after sitting through this thing, I feel like that 8% rating is a kindness rather than an accurate measurement of the movie's quality.

'Hot Pursuit' arrives on Blu-ray just three short months after its theatrical run from Warner Brothers. Pressed on a BD25 disc and housed in an eco-friendly case with DVD and identical slip cover, the disc opens to a trailer for 'The Intern' before reaching the main menu.

The movie itself may not be great, but the picture quality for 'Hot Pursuit' holds up very well with this colorful 2.40:1 1080p transfer. With film grain intact, detail is all around very strong - especially in midrange shots and close-up shots. Backgrounds can appear to be enhanced with some CGI here and there so those shots can look a bit softer than others. Colors are bright and vibrant and primaries practically leap off the screen. Black levels, for the most part, are very strong and provide a great sense of depth. The only really problematic areas are during the previously mentioned CGI background sequences. Granted it's hard to shoot a dialogue scene in the back of a moving pickup truck, but with this sharp resolution the CGI stands out in a big way as contrast can appear a bit tweaked and the image becomes noticeably flatter. Overall it's a pretty good looking movie on Blu-ray.

Sporting a DTS-HD MA 5.1 track, 'Hot Pursuit' earns strong marks for its audio presentation. Sound effects and the film's music by Christophe Beck get a lot of play and plenty of room to exist around the numerous dialogue exchanges. The film's dialogue is crisp and clear and easily heard - unless of course it's not meant to be depending on the setup for a joke. Imaging is actually fairly impressive as there are plenty of atmospheric sounds and background noises to keep the surrounds engaged and present. Levels are kept well into the midranges, even when the action beats kick in and the lead actresses are screaming at each other. All around a solid track that does right by this movie.

The Womance: (HD 3:05) Witherspoon and Vergara talk about all the fun they had on set.

Action Like a Lady: (HD 2:26) A quick little gag reel showing off all the times someone messed up on set and made someone laugh.

Alternate Ending: (HD 1:28) Listed as an alternate ending, it's more like additional outtakes as there isn't any kind of setup how any of these news-style interview clips involving the characters Cooper and Daniella met along their journey work into the film other than as filler. There is more Gaffigan and Birbiglia so there is that at least!

I'm used to watching bad movies. I go to see bad movies all the time and I willingly watch flicks like 'The Room' several times a year in the theater - but that's because those kinds of movies are so bad they're actually entertaining. 'Hot Pursuit' isn't entertaining. I only had a chuckle or two throughout the movie and those too few laughs didn't even involve the main characters or the talented actresses playing them. Even with a strong AV presentation and a smattering of okay extras, I just can't will myself to recommend this movie. If you're at all curious, it's a rent first and see if you like it sort of situation. I didn't like this movie at all and I actually felt a bit embarrassed for Witherspoon and Vergara as they've been in and done better works than this.

Sale Price 9
List Price 19.98
Buy Now
3rd Party 8
In Stock.
See what people are saying about this story or others
See Comments in Forum
Previous Next
Pre-Orders
Tomorrow's latest releases