From creator Graham Yost, each episode of the edge-of-your seat final season propels U.S. Marshal Raylan Givens (Timothy Olyphant) and criminal mastermind Boyd Crowder (Walton Goggins) ever closer to their ultimate confrontation. While Raylan is torn by just how far he will go to bring Boyd down – including using Boyd’s fiancée Ava (Joelle Carter) as his secret informant – both Raylan and Boyd must now contend with the new incendiary force in town (Sam Elliott), a drug lord intent on building his own pot empire in Harlan. Based on the acclaimed crime novels of Elmore Leonard, the Peabody Award-winning drama now takes its place in the pantheon of acclaimed drama series.

Creating the final season of any television series is likely an incredibly difficult affair. The medium has historically not been built to think of its narratives as moving from start to finish the way a traditional story does. Instead, the medium has typically thought of stories in terms of seasons, while the ending is something to be dealt with at a later date. It is kept far off in the distance, so that a show may go on in perpetuity – or as long as audiences continue to tune in week after week, season after season.

But as television matures, more and more series have adopted the 13-episode (or less) season model, and have begun to focus on storylines that have a definitive end in mind. In the case of FX's wonderfully well-written and acted modern-day Western, 'Justified,' that sense of an ending was put in place the moment a hardened lawman by the name of Raylan Givens (Timothy Olyphant) put a bullet in the chest of his nemesis Boyd Crowder (Walton Goggins). It was the series premiere, and the deputy U.S. marshal had just been called back to his childhood home of Harlan County, Kentucky to face the ghosts of his past, and deal with the unpredictable, violent, and loquacious Crowder. What followed was six seasons of some of the best that television has had to offer in, say, the last decade or so.

The strange thing is, when 'Justified' started out, although the show had a strong central character in Givens and an even stronger sense of place in Harlan County, the series didn't reveal itself to have much of an arc of any kind. The first six or so episodes of the series were more or less procedural in nature. That is, they followed a crime of the week that was solved within the confines of a television hour. At about the halfway mark of season 1, the series began to tell stories of a more serialized nature. Characters like Ava Crowder (Joelle Carter) and the aforementioned Boyd took on much larger roles, while Raylan's fellow deputy marshals Rachel (Erica Tazel) and Tim (Jacob Pitts) wound up having their roles reduced (the more time the series spent exploring the denizens of Harlan County and Raylan's relationship to them, the less time there was for marshal stuff). And while it was unfortunate to see talented actors set adrift in an expanding storyline that wasn’t quite sure what to do with them, the series marched on.

By the time season 2 rolled around, 'Justified' was firing on all cylinders, and had successfully transformed itself from a crime-of-the-week procedural with the heart and wit of Elmore Leonard, to a taut, superbly scripted tale of a conflicted lawman and the home he couldn't quite bring himself to escape…with the heart and wit of Elmore Leonard. The series never attracted the kind of audience it deserved, but that didn't stop executive producer Graham Yost from creating an unforgettable drama for six seasons. 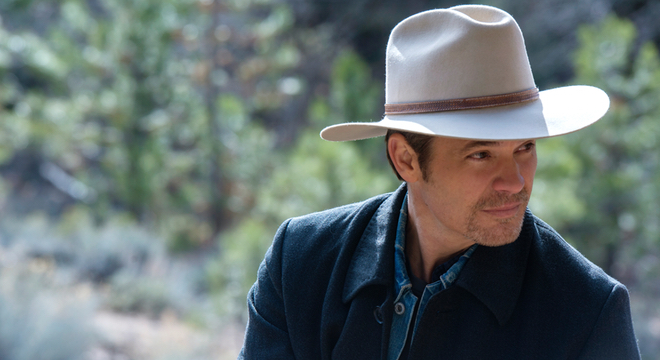 There were bumps in the road along the way. For whatever reason, the even-numbered entries in the series were far better than their odd-numbered counterparts. That is, seasons 2, 4, and 6 set high water marks season 1, 3, and 5 simply could not reach. That's not to say season 1 and 3 were bad, they both had their moments, but season 5 was a mostly incoherent mess that left many a critic looking upon the sixth and final season with an unprecedented amount of trepidation. Thankfully, Raylan's last ride wouldn't follow in the footsteps of its predecessor; it would distinguish itself as one of the series' best, and certainly one of the best series finales in recent memory.

Although the crux of the season was built around Raylan staying in Harlan for one last job – that is, to build a case against Boyd Crowder that will see him in prison for the rest of his natural life – there was much more to it than just going after the charismatic bad guy. For one, Raylan had successfully turned Boyd's ladylove and fiancé, Ava, against him, and was using her to collect evidence. But in the typical 'Justified' sort of way, the season also brought on a host of new characters, each with a distinct and entertaining personality. Enter Sam Elliott (sans mustache) as Avery Markham, the "Pot King of Colorado," and his band of Blackwater-esque mercenaries, led by the great Garret Dillahunt, as the smooth talking and majestically bearded Ty Walker.

While adding new characters to a final season seems risky, the move paid off big time for 'Justified.' The addition of Walker and his associates Seabass (Scott Grimes) and the slow-witted Choo-Choo (Duke David Roberts) helped the season move swiftly through several storylines, involving Markham's plan to buy up real estate ahead of a possible vote to legalize marijuana, his love affair with the duplicitous Katherine Hale (Mary Steenburgen), and Boyd Crowder's role in ripping off Avery's $10 million kept in a vault in the basement of a pizza parlor.

That is certainly a lot of plates to keep spinning, but the season handled all the moving parts with aplomb. Each action led to an unexpected resolution that made each subsequent action equally surprising and entertaining. There's a hilarious "Who's on First"-like routine that Raylan does during his first run-in with Choo-Choo that is itself an unexpected gift, but also leads to an unanticipated turn of events regarding the season's newcomers.

Through it all, the season manages to give one last shot to a host of great supporting characters – most notably Jere Burns' inimitable Wynn Duffy. But it also focuses a great deal on the idea that Raylan, Boyd, and Ava have only been searching for a way out of Harlan from the get-go. And as the series turns the corner on its final episode: 'The Promise,' the stakes are raised in a way that often feels forced on other programs. Unlike another FX show that ended its run recently, 'Justified' had miles to go before it was done; it just chose to go out while it was still on top. 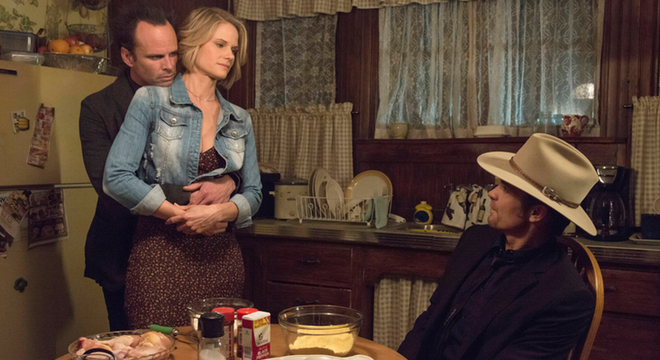 'Justified: The Complete Final Season' comes from Sony as a 3-disc collection in an oversized keepcase + Digital Download. Each disc is a 50GB Blu-ray with its own special features.

The 1080p AVC/MPEG-4 encoded transfer looks very good, giving the final season the kind of visual send-off the series deserves. Fine detail is present everywhere, giving an extra dimension of clarity to all kinds of different settings. Facial features are on full display, as are clothing textures and background elements. There are a few instances of soft focus, and the occasional soft edge here and there, but otherwise the image is very clear.

Contrast is high, giving a nice range from grey to deep black without losing any image quality. White balance is also good, as it allows for bright, sunny days without the picture looking too hot or blown out. There is no trace of banding or crush on the discs, either.

Color is bright and vibrant, even though the series typically utilizes a more natural palate. Still, many scenes inside Boyd's bar look terrific, as everything is washed in blue or red neon. Outdoor scenes are filled with a mix of lush greens, browns, and yellows that do a nice job of making California look like Kentucky.

Overall, this is good-looking set that remains consistent across all 13 episodes.

The Dolby Digital 5.1 mix delivers distinct sound that is first evident in the somewhat maligned opening credits song 'Long Hard Times to Come.' Whether you like it or not, the music is presented with great clarity and richness that includes some nice LFE that will fill the room. Otherwise, the audio offers a nice mix of dialogue and sound effects that are balanced quite nicely with one another. Actors are always easily heard, and things like gunshots and explosions ring out with terrific clarity. There are a few instances where additional LFE would have been nice, but overall, the mix is strong on the front end.

But the mix also makes good use of the rear channels, offering up consistent ambient noise that creates a great atmospheric effect and enhances things like shootouts and fisticuffs. There is a subplot that involves Boyd using an abandoned mineshaft to gain access to a building, and those scenes make terrific use of the setting to create an exciting and dynamic sound.

Directing the Show: Adam Arkin (HD, 11 min.) – This featurette offers an inside look at director Adam Arkin's process, specifically how he works with the actors and how he sets up a shot.

Hollywood to Harlan (HD, 6 min.) – This special feature shows how the crew travels to Harlan every year to learn more about the location and how they can make the show feel more authentic.

Dutch Speaks (HD, 12 min.) – In this special feature, late author Elmore Leonard chats about his writing process and how it was that his creation of Raylan Givens came to life through Timothy Olyphant's performance.

'Justified' may have never risen to the ranks of 'Breaking Bad,' 'Game of Thrones,' or 'Mad Men,' but that doesn't mean it shouldn't be spoken of in the same breath. The series was often as smart as could be, and featured the kind of crackling dialogue that is far too rare these days. Performances were top notch across the board, with Olyphant, Goggins, and Carter deserving the lion's share of the praise. It's a shame to see such a terrific series go, but it's always great to see a great show go out in style. With great picture and sound, and some nice extras, this one is recommended.

Sale Price 25.08
List Price 30.99
Buy Now
3rd Party 22.81
In Stock.
See what people are saying about this story or others
See Comments in Forum
Previous Next
Pre-Orders
Tomorrow's latest releases