Much of the appeal of Mad Men lies not in its period production, the styles of the era, or the commentary on the lives of the socially privileged as they witness the world changing and progressing around them. Certainly, these are all potent ingredients to what makes Matthew Weiner's series one of the best television programs in the history of the medium, but when it comes right down to it, many audiences want to be in the moment with Don Draper. They want to feel the exhilaration of another episode like 'The Wheel,' or they want to see him with yet another superficial sexual conquest, drinking and smoking like the invincible god of excess so many have begun to worship at the feet of.

But as the series turns the corner into its final 14 episodes (split into two seven-episode seasons – not so cleverly branded by the folks at AMC as "Seven and Seven," because there's a lot of drinking on the show, get it?) audiences were treated to a different kind of Don Draper. It was a Don whose best days had clearly passed, a Don who had to mark the whiskey bottle to know when to say, "when." It was a Don who once again knew desperation and despondency, and, most of all, it was proof that Don Draper without an outlet through which he could spew forth his creativity as well as his personal demons, was not much of anything at all. 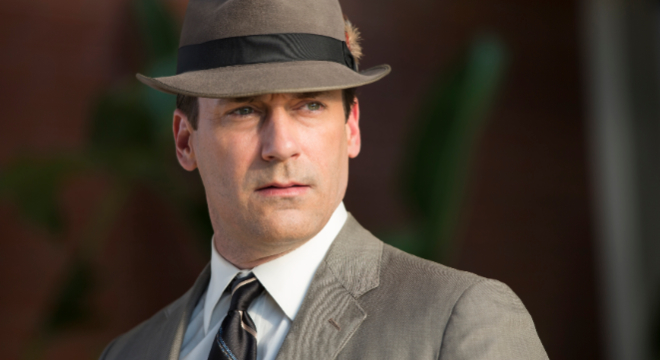 When the season begins with the exhilarating 'Time Zones,' the narrative of the series has shifted such that it is no longer exploiting the popularity of Don, but exploring his failings in a way that can make the audience riveted by his actions once again. After all Don has proven time and again that, if nothing else, he's a master of reinventing himself, and if anyone knows how to wring potent drama from such a reinvention, it's Matthew Weiner.

With reinvention comes the pangs of nostalgia, the recognition of better days gone by, and the omnipresent reminder that everything will eventually end. There is a tendency to look back and to compare and contrast the "good ol' days" with the dismal stagnancy of the present. It's certainly a tendency of Don Draper, at any rate, which explains his inability to be in the moment, his need to be thinking of other things, to be simultaneously considering the future and struggling to reconcile his past.

That can be a dark way of looking at things, but that pervasive melancholic undertone is perfect for a series such as this, and although it takes on a different air – this is the literal beginning of the end, of course – the subtle shift in atmosphere is both poignant and comfortingly familiar. It permeates everything, especially in the season premiere, but it also lingers like never before. Here there's not much looking forward to the future. With the war in Vietnam raging on, civil rights still being violated, and computers taking over the world, the future is beginning to look like something out of a nightmare (and after the tumultuousness of season 6, is anyone surprise?). As such, there's a whole lot of staring into the past, usually through the bottom of a bottle of rye.

Such a beautiful, elegiac tone is often the default setting for 'Mad Men,' and it is here in the final season, but it is mixed with a pervasive notion of time that often borders on the poetic. Time, or the passing of it, is everywhere; it even takes center stage as the first image of the season, with Freddy Rumsen (Joel Murray) delivering a pitch for a watch that was written by Don, but passed off as his own. Throughout the episode, director Scott Hornbacher continually shifts to images of clocks and wristwatches as a constant reminder that it's not forever waiting around the corner; it's the end.

As the season progresses, there's a delicate balance of those themes at play as Don works his way back into a tenuous relationship with the company that fired him at the end of last season. There's a frustration balanced with urgency on his behalf that allows Jon Hamm to do some of his best work, and provides the narrative with some richly rewarding moments. But as much as the season is about Don getting back into the good graces of the people and the industry tired of his antihero shenanigans, it's also about Peggy and her relationship to not only Don, but also the series as a whole. In a sense, it becomes clear that Elisabeth Moss' performance over the past seven-and-a-half seasons wasn't one of second fiddle or supporting character; Peggy has always been the other protagonist.

That understanding, that 'Mad Men' has partly been about Peggy's seemingly unlikely ascent in an unforgiving business, becomes a potent part of the season's throughline, which gradually begins to focus more and more on the moon landing in July of 1969. It takes a while to get there, but like the rest of the season, the progression of time makes itself known not only in the "giant leap" made by mankind, but on a more personal level as well, when Robert Morse sings and dances Bert Cooper's way out of the series in a charming yet heartbreaking midseason finale.

There is a plaintiveness running through the first half of the final season of 'Mad Men' that at once calls to mind all that has come before, while keeping in mind that the end is just around the corner. And in the hands of Weiner and his writing staff, they've managed to find beauty in the beginning and now they've found the beauty in the beginning of the end. 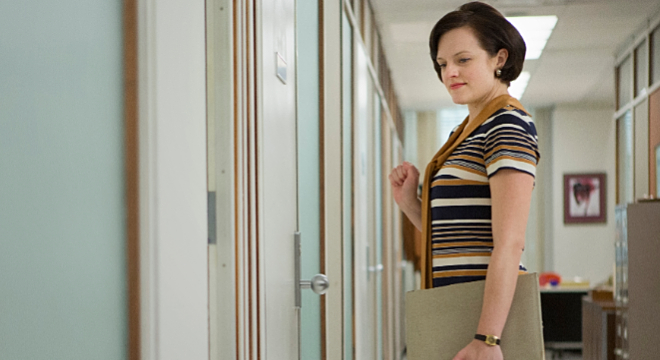 'Mad Men – The Final Season: Part 1' comes from Lionsgate as a two-disc set + digital download. Each disc is a 50GB Blu-ray splitting the seven-episode season – four episodes on disc 1 and three episodes on disc 2. Each episode features the welcome return of full-length commentaries from Weiner & Co., and some insightful and interesting extras about the year 1969.

The 'Mad Men' discs have always enjoyed a strong, detailed image transfer, and 'The Final Season: Part 1' is no different. The image is strong from the first episode to the last, with plenty of fine detail on display in the actors' faces, their hair, and period-specific wardrobes, but it is also present in the subtle wear and tear that's seen in the offices of Sterling Cooper & Partners. That attention to detail carries over to other locales (i.e., sets) like cozy bungalow owned by Megan Draper (Jessica Paré) that's nestled deep in the Hollywood Hills.

Color and contrast are also quite strong, producing full-bodied blacks that are inky when needed to be and show a nice delineation everywhere else. White's never look too hot or blown out, resulting in a crisp image with strong edges. Colors are bright and vivid, though sometimes they can read slightly over saturated – but that may also have been a technical choice to play up the style of the era.

Overall, this is a lush presentation that only stumbles with a few moments of soft focus. Otherwise it looks great from top to bottom.

When you have a musician and composer as talented as David Carbonara, working to create a consistent thematic structure through the series' musical score, then the expectation is that the sound quality will be as consistent and that it will deliver his work – and the work of others – in the kind of fashion it deserves. Thankfully, the DTS-HD Master Audio 5.1 mix delivers that in spades.

Along with the wonderful contributions by Carbonara and many, many period specific songs, the dialogue sounds clear, strong, and well balanced against the other elements that are typically on display. Take for instance the opening scene of 'Time Zones,' in which Freddy is addressing the audience directly. There is no other sound but his voice, and as Weiner points out on the commentary, the editor only puts in the sounds of a bustling New York City when the focus of the camera shifts to reveal Peggy in a wider shot of the office. The shift in sound is dramatic, as Rumsen's voice comes through so nicely, you don't notice the absence of ambient noise until it suddenly starts coming through the rear channel speakers.

That level of detail is heard time and again throughout all seven episodes. The immersive quality of the audio is such that it atmospheric noise moves in and out of scenes almost imperceptibly, becoming big when it needs to, and shifting out of the way when dialogue or music is called for. It makes for a fantastic listening experience that takes the show to a whole new level.

Technology: 1969 (HD) - This is an interactive gallery featuring images of technology in the year 1969.

The Best Things in Life Are Free (HD, 8 min.) - A look at Robert Morse and the character of Burt Cooper throughout the years on Mad Men. It's a terrific little tribute that's almost as moving as Morse's final episode itself.

'The Runaways' Commentary with Matthew Weiner and Chris Manly

Gay Power (HD, 22 min.) - in this special feature, Marcia Gallo, Author and Professor of History, University of Nevada, Las Vegas,discusses how the prevailing attitudes in the 1960s still saw homosexuals as being sick or ill in some way,and how activists sought to come back those preconceived notions.

'Mad Men' will undoubtedly go down as one of the greatest television programs ever, and these seven episodes are a good indication as to why. The series has progressed (and shown progression) like almost no one else. What's striking about this first half of the final season is how much of it feels like it was meant to be, as though Weiner may not have always known the specifics, but he was keen to push the show toward an ending like this. It's a wonderful half-season that justifies the split with a tremendous, moving midseason finale, and with the welcome return of episode commentaries, great picture, fabulous sound, and some interesting extras this is highly recommended.

Sale Price 26.83
List Price 29.19
Buy Now
3rd Party 39.99
In Stock.
See what people are saying about this story or others
See Comments in Forum
Previous Next
Pre-Orders
Tomorrow's latest releases