From masters of horror Blumhouse Productions -- producer of THE PURGE, INSIDIOUS and SINISTER franchises -- THE LAZARUS EFFECT follows a group of researchers led by Frank (Mark Duplass) and his fiancée Zoe (Olivia Wilde,) who've achieved the unimaginable- bringing the dead back to life. After a successful, yet unsanctioned, trial on a newly deceased animal, the team is ready to unveil their breakthrough to the world. When the dean of their university learns of their underground experiments, their project is unexpectedly shut down and their materials confiscated. Frank, Zoe and their team (Donald Glover, Sarah Bolger and Evan Peters) take matters into their own hands, launching a rogue attempt to recreate their experiment, during which things go terribly wrong and one of their own, Zoe, is horrifically killed. Fueled by terror and grief, Frank pushes them to do the unthinkable: attempt to resurrect their first human test subject.

Initially, the procedure appears a success, but the team soon realizes something is wrong with Zoe. As her strange new persona reveals itself, the team quickly becomes stuck in a gruesome reality. They are no longer faced with the question of whether they can bring someone back to life- but rather, the wrath of her return.

Visually stylish and polished, 'The Lazarus Effect' provides just enough scares and a sense of impending dread to keep audiences watching until the end. Most impressive and effective is director David Gelb's (best known for the excellent documentary 'Jiro Dreams of Sushi') camerawork when a recently reanimated dog stealthily sneaks into the bedroom of its new owner and hovers above her while she sleeps, intensifying the icky creep factor. But in spite of that, the modestly budgeted sci-fi horror flick fails to make a genuinely frightening experience on the apprehension of human interference upon nature — the sort where unchecked science tampers with the metaphysically unknown and plays out its God complex fantasies with grave results. Or at least, that's the theme believed the filmmakers are toying with, touching on a few ideas surrounding death and the afterlife with perfunctory, superficial comments that are just as quickly forgotten as they are mentioned. Screenwriters Luke Dawson ('Shutter') and Jeremy Slater ('Fantastic Four (2015)') haphazardly chuck hackneyed opinions hoping some will resonate with viewers and not alienate others.

This is especially true, if also most apparent, of the two main medical researchers leading a small graduate group experimenting with a serum intended to assist coma patients but discovered to resuscitate the dead. This unintended consequence, which will become predictably useful when one of their own finds themselves unexpectedly traveling to the other side, is justified by head scientist Frank (Mark Duplass) as providing surgeons with a few, much needed minutes to save lives during those dangerously tricky medical procedures. The moral dilemma behind the power to prevent death is brought up by the team's newest recruit, camera operator Eva (Sarah Bolger), a dead ringer for the "Final Girl" trope although she's never fully fleshed out to be allowed that prestigious title. Frank is quick to answer with a scientific explanation for the common vision of a bright light at the end of a tunnel as a chemical reaction involving the pituitary gland capable of inducing hallucinations. His fiancée and research partner Zoe (Olivia Wilde), on other hand, counters with a spiritual, cosmic account that ultimately ends with "We just don't know" while twirling a crucifix. 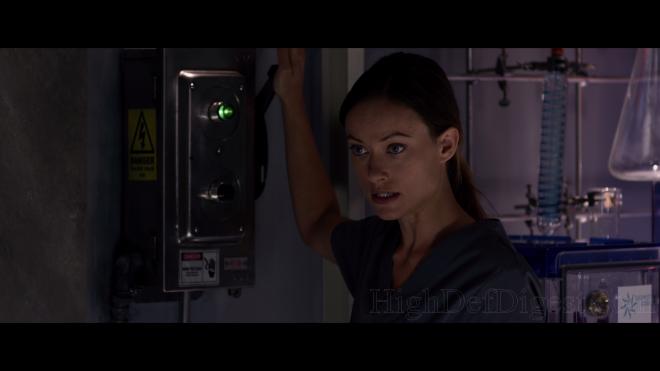 The potential to do and say more on the subject — you know, the possibility of creating a decently intelligent thriller — is quickly set aside, discarded, dropped, forgotten — take your pick of any number of predicates — with a cut to the aforementioned dog being brought back from the dead. The success of that experiment, of course, brings a serious of problems threatening to shut the program down along with more quandaries about consciousness, the soul and briefly interesting comments on the function of memory. The university funding the research suddenly doesn't want any involvement, asking reasonable questions about the serum's ethical applications, while lab assistants Niko (Donald Glover) and Clay (Evan Peters) debate the weird eeriness of bring the dead back to life. The latter two don't so much discuss the disturbing implications involved as they simply provide mild comic relief, point out queries and act the cowering wimps when things suddenly go awry. They remind of a modern version of Scooby and Shaggy, but it's not entirely clear who's who since they're both bumbling but highly intelligent dolts.

It would seem the filmmakers of 'The Lazarus Effect' want to have it both ways — a smart sci-fi feature on the science of metaphysics and a suspenseful supernatural tale. But by favoring more of the horror aspect instead of figuring a careful balancing act of the two, the movie bores with cheap scare tactics that largely feel inspired by video games and other, far superior films. Dramatic complications, like a mysterious, whatever-you-want-it-to-be pharmaceutical corporation led by a grim, steely-eyed Ray Wise, unexpectedly yet much too conveniently show up to confiscate and end Frank and Zoe's years of research. Such contrived plot devices tend to frustrate and feel like last-minute additions because they're never resolved and arbitrarily used to push the story. The stupid myth of the humans using ten percent of the brain is mentioned for no reason than because the filmmakers can, and Zoe's slow transportation to killer with psychic powers is confusing, as if done for the sole purpose a twist ending. The serum is capable of unlocking the brain's full potential; however, it's at the cost of evolving into a crazed, black-eyed supervillain.

'The Lazarus Effect' aspires to the genius of Mary Shelley's Frankenstein with notions of human interference and the dangers of science run amok. But the best it accomplishes is a carelessly pieced together mishmash of random ideas that go nowhere. It's a Frankenstein's monster of a horror film, sown from the resuscitated leftovers of 'Flatliners,' the claustrophobic hallways of 'Hollow Man,' the discarded afterthoughts of 'Event Horizon' and a teasing dash of a possible sequel, which is all the more horrifying.

20th Century Fox Home Entertainment brings 'The Lazarus Effect' to Blu-ray with a code for an UltraViolet Digital Copy. The Region A locked, BD-50 disc is housed inside a blue eco-cutout case with a glossy slipcover. At startup, viewers can skip several trailers to a standard menu screen with full-motion clips and music playing in the background.

The experiments against nature carry on with a lovely, near-reference high-def transfer directly taken from a digital source. Shot entirely in HD using Sony's CineAlta camera system, the 1080p/AVC MPEG-4 encode arrives with razor sharp details and crystal-clear clarity throughout. Individual hairs are distinct, fabric on clothing is finely textured, and facial complexions are revealing. We can practically make out every pore, wrinkle and blemish on the faces of the cast while the lettering, knobs and buttons of the various computers, machines and other random doohickeys.

Primaries are solidly rendered with a vivid, energetic pop, and secondary hues are full-bodied, giving skin tones a natural, lifelike appearance. Contrast and brightness are very well-balanced with crisp, brilliant whites from beginning to end and excellent shadow delineation, providing the 2.35:1 image with an appreciable cinematic appeal. However, blacks are not always consistent with several noticeable lackluster moments that fall flat. Other than that though, this is an excellent presentation.

Surprisingly, the design doesn't come with a great deal of activity in the surrounds, leaving several moments feeling somewhat dry and tame. But those times when the rears are employed, which again doesn't happen often, atmospherics are discrete with excellent, fluid panning that will leave the listener thinking someone else may be in the room. In the end though, there's not a whole going on to truly envelop the viewer.

Where the lossless mix succeeds and maintains interest is the front soundstage, which feels spacious and expansive from start to finish. Imaging exhibits outstanding channel separation and balance between all three speakers, generating an amusing wall of sound with flawless movement from one side of the screen to the other and convincing off-screen effects. The mid-range is dynamic and extensive with room-penetrating clarity, allowing the tiniest noise and sound to be heard even during the few loud action sequences. The low-end is shockingly powerful with a deep, responsive punch that nicely digs deep, adding to the suspense and thrills (bass chart). Through all this, vocals remain precise and intelligible in the center, keeping the listener engaged.

Visually stylish and polished, 'The Lazarus Effect,' starring Olivia Wilde and Mark Duplass, provides just enough scares and a sense of impending dread to keep audiences watching until the end. In spite of that, director David Gelb fails to make a genuinely frightening experience on the apprehension of human interference upon nature. The Blu-ray, on the other hand, arrives with an excellent audio and video presentation, but the bonus material is a forgettable assortment that adds little value. The overall package is ultimately a rental at best for the curious.

Sale Price 7.5
Buy Now
3rd Party 1.75
In Stock.
See what people are saying about this story or others
See Comments in Forum
Previous Next
Pre-Orders
Tomorrow's latest releases