They say the only two certainties in life are death and taxes. But while we may complain bitterly about the latter, as any maker of horror films knows, it's the former that pre-occupies our fears. Indeed, our mortal fear of What Lies Beyond is the terrifying proposition that informs every fright flick ever made. Yet in deference to commercial prospects (i.e., to make money), most horror films today traffic only in hoary, easily predictable cliches, and treat death from the arm's-length of ironic camp. Thankfully, every once in a while a film comes along that is ambitious (or just plain foolish) enough to try to graft B-movie cliches onto grander themes, and actually be about something more than knives, gore and boobs.

'Flatliners' is one of those flicks. From the outset, it promises to take us on nothing less than a journey to the afterlife itself and back, revealing the purpose of our existence along the way. That's a pretty tall order for any movie to deliver -- especially one made by a major studio and engineered for maximum box office potential. But while I can't say 'Flatliners' totally pulls it off, I do have to give it points for at least trying.

"Are you afraid to die?" asks the film's tagline. Nelson (Kiefer Sutherland) isn't. An ambitious, charismatic medical student, he persuades classmates Rachel (Julia Roberts) and David (Kevin Bacon) to join him in a reckless experiment -- to prove whether or not there's life after death, they will kill themselves with a temporary shut-down ("flatline") of their heart and brain functions. After Nelson survives the first experiment, the others follow by flatlining in increasingly longer intervals -- but their horror begins when they realize that although they've come back alive, they haven't come back alone.

As a horror flick, the central conceit of 'Flatliners' is both its blessing and its curse. Quite simply, if you're going to make a film about the very essence of life and death, you'd better have a good answer about what's on the other side, or risk unfulfilled expectations. Unfortunately, as the true consequences of the med students tours of death are slowly revealed, it's hard not to be underwhelmed. Sorry, but I personally need a bit more than a 'Twilight Zone'-style twist on old-fashioned morality plays to get my intellectual juices going. Without giving away any of the film's secrets, 'Flatliners' eventually succumbs all too easily to a thematic cliche right out of an old EC Comic: that all of the wrongs you've committed in life will ultimately come back to haunt you -- unless you make them right. 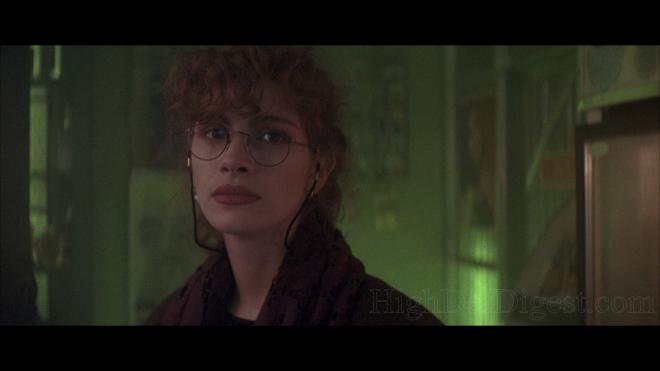 Nevertheless (and especially for its first half or so), 'Flatliners' is undeniably stylish and fun to watch. Directed by Joel Schumacher, whose Hollywood career continues to baffle most critics, the film is a prototypical early-'90s genre flick, made for the aging MTV generation still addicted to fast-cut pacing, fancy camera tricks and a cast of attractive up-and-comers.

Indeed, the film's biggest draw today probably remains its cast -- in terms of star power, it's almost as impressive as Schumacher's '80s brat pack flick 'St. Elmo's Fire.' It's hard to imagine Roberts, Sutherland or Bacon jumping at the chance to be in a movie like this these days, but at the time it was a career step-up for all of them. And if they did have any ambivalence at the time with doing what is essentially a B-grade horror flick dressed up with big studio dollars, they certainly don't let it show -- all create likable, fairly three-dimensional characters with no apparent condescension to the material.

Unfortunately, the concept of 'Flatliners' is so strong that it was perhaps inevitable that we'd be disappointed in the routine genre cliches it trots out by film's end. I continue to admire its thematic idealism and visual panache (and it's never a chore to watch Roberts or Sutherland), but it's just not enough. Is 'Flatliners' one of the genre greats, or even just a long-lost sleeper of the '90s? Sadly, no. I still give it points for ambition, but ultimately 'Flatliners,' well, flatlines.

Mill Creek Entertainment brings 'Flatliners' to Blu-ray on a Region Free, BD25 disc housed inside a blue eco-case. There are not previews at startup, and the disc goes straight into the movie.

When 'Flatliners' first hit Blu-ray back in 2007, the format was still in its early stages and for that time, the movie looked good. Seven years later, Mill Creek Entertainment re-releases the movie with what appears to be an identical 1080p transfer, except for being upgraded to an AVC MPEG-4 encode (2.35:1). In spite of that, and after thousands of HD movies since, the picture quality is sadly not up to the task of satisfying today's expectations.

On the whole, the high-def presentation comes from a source that's in rather good condition, though it would greatly benefit from a restoration. The occasional dirt and speckle pops up, but overall, the picture is clean. A few moments dip in resolution with flat contrast while other spots look great with whites that run slightly on the hot side, causing a tad of blooming. On average, colors appear bold with some scenes looking particularly animated, but several others are duller with flesh tones that seem sickly and flushed. Blacks are mostly stable and accurate, yet shadows tend to overwhelm the finer details. Definition and clarity are definitely the video strongest area, but compared to titles from around the same period, it's somewhat disappointing but still passable.

Sadly, things don't improve much, or rather, not at all, in the audio department. On the one hand, this legacy Dolby Digital stereo soundtrack is satisfying because it's closer to the original design than its LPCM predecessor. On the other, it's also the weaker of the two because dynamic range and acoustics feel narrower and flatter. Although the soundstage displays great balance and clarity with pleasing separation in the mids, the overall mix is uniform with almost nothing happening in the upper ranges. Low bass is mostly listless and bland, failing to give the music or bits of action any character or weight. Nevertheless, with strong, well-prioritized vocals, the track is acceptable and gets the job done.

'Flatliners' is a thriller with a very intriguing and ambitious premise, but ultimately it fails to deliver on the promise of its setup. Still, it is notable for its (now) all-star cast (Julia Roberts, Kiefer Sutherland, Kevin Bacon), and is quite an exercise in flashy style. The Blu-ray from Mill Creek comes with a strong and passable video and audio presentation, but it doesn't compare to other titles from the same period. Lacking in bonus material, fans might want to wait for the price to down before purchasing.

Sale Price 6.99
List Price 9.98
Buy Now
3rd Party 3.99
In Stock.
See what people are saying about this story or others
See Comments in Forum
Previous Next
Pre-Orders
Tomorrow's latest releases