Cellar Dweller - In the 1930s a horror-comic artist's creations come alive and kill him. Years later a new cartoonist revives the creatures in his house, now part of an artist's colony.

Catacombs - A demon is trapped in a monastery. 400 years later a young girl arrives at the monastery to study.

Partly playing on childhood fears of the scary creatures residing in one's basement, 'Cellar Dweller' features what looks like the long-lost brother of Cat and Rat Ghoulie — for those familiar with the horror-comedy franchise. This shouldn't come as much of a surprise since the same company, Empire Pictures, produced both, along with several other cult favorites before going bust and rising once again from the ashes as Full Moon Entertainment. They also used the same special effects company that worked on 'Ghoulies' for this forgotten direct-to-video gem, Mechanical & Makeup Imageries, who, by the way, are responsible for several low-budget horror fare of the late 80s. The director of this little horror ditty is John Carl Buechler ('Troll,' 'Friday the 13th Part VII: The New Blood'), the mastermind behind MMI and creature designer of those little demonic critters along with many others in the Empire catalog. Needless to say, the foul, slobbering dweller in the cellar has many friends in high places, enough to warrant an entire movie revolving around it.

The beast is a hairy ten-foot tall monster summoned by a careless glance reading from a mysterious, leather-bound book with a large pentagram carved in the front. That'll teach ya for thoughtlessly opening random creepy-looking books. Hilariously, the brutal, murderous creature can be controlled by comic book artists . . . or is it that comic book artists suffer from troubled imaginations and more likely to let out homicidal tendencies in their art. In either case, the story by Don Mancini, best known as creator of the 'Child's Play' franchise, sees the stunningly beautiful graphic artist Whitney (Debrah Farentino) — right now, comic book nerds are rushing to buy this movie — accidentally awakens the demon from a 30-year slumber and draws it to violently kill her rivals in a prestigious school for the arts, a plot in the vein of the Dario Argento's 'Suspiria.' The movie is cheesy, ridiculous fun proudly displaying its love for other Empire flicks in the background and features a short cameo appearance from Jeffrey Combs. Best of all is seeing the awesomely beautiful Yvonne De Carlo, aka Lily Munster, as the snide, scheming headmistress of the school. (Movie Rating: 3.5/5) 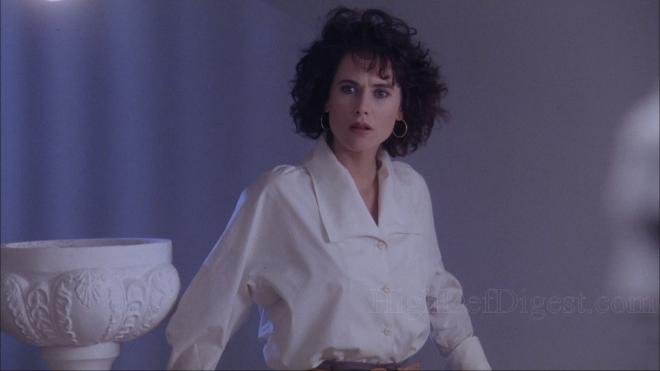 Refraining from the usual splatter of gross-out gore and cheap jump scares, 'Catacombs' is a true horror gem that still goes without appreciation, except for the most ardent and dedicated of genre enthusiasts. At the time of its completion, Empire Pictures was in a financial bind and forced to sell, with MGM purchasing a majority of the library and Columbia TriStar taking a smaller portion. Making it the last movie made by Charles Band's company, the stylishly made and effective creep-fest by David Schmoeller ('Puppet Master,' 'Netherworld') was lost in the transaction and forgotten before finally reemerging five years later as the fourth entry in the direct-to-video 'Curse' franchise. It's a shame it took that long and absurdly associated with such a weak series — although Christopher Lee's presence in part three was a delight. But, on the other hand, at least it was finally made available for horror hounds to devour because this spine-chilling thriller is sure to satisfy appetites.

Seeing as how the story written by Schmoeller is about a 400-year-old demon imprisoned below the catacombs of an ancient monastery — so you know, he's a little more than ticked — the film could easily go for showering the screen with buckets of blood and guts. But like the poor, unsuspecting monks inhabiting the abbey, the director wisely abstains from cheap, evil tactics — from pleasures of the flesh — and immerses his audience with a dark, ominous atmosphere. Making excellent, effective use of a real life monastery and an underground crypt, Schmoeller aims to creep out his viewers with memorable eerie visuals of possessed monks and a spooky life-size crucifix with a real man on it, which is put to great use in the second half. Ian Abercrombie ('Army of Darkness,' Mr. Pitt of 'Seinfeld') stars as the abbot who welcomes Father John Durham (Tim Van Patten of 'Class of 1984') and school teacher Elizabeth (Laura Schaefer), but the surly Brother Marinus (Jeremy West) introduces a dramatic subplot that works well and makes a delightfully fun watch. (Movie Rating: 4/5) 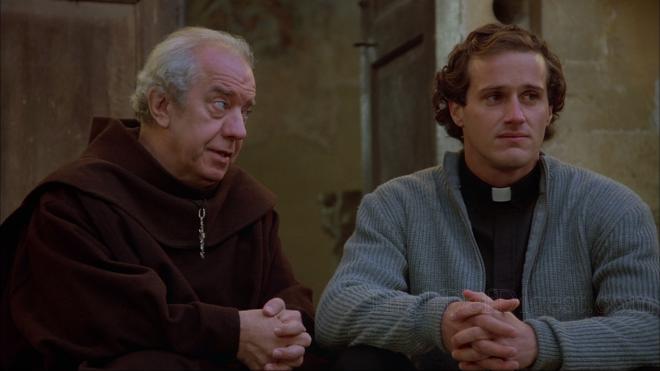 Shout! Factory brings 'Cellar Dweller/Catacombs' to Blu-ray as a double-feature single-disc release under the distributor's Scream Factory line. The Region A locked, BD50 disc containing both films is housed inside a regular blue case. At startup, the disc goes to an animated screen with music where viewers can choose between the two movies.

The monster dwelling in the cellar sadly shows its age on Blu-ray. A very brief text at the start warns viewers the 1080p/AVC MPEG-4 encode was made from the only available film print found in the MGM vaults, and it is presented here as is. The video comes with the usual yellowish hue that happens with time, which, unfortunately, affects contrast and brightness. Whites are mostly clean, but the overall picture is flat and somewhat dull while black levels come off much too strong, making the finer details in the shadows difficult to make out. Colors are lackluster and a bit faded, but consistent throughout. The presentation also suffers from visible dark scratches, vertical lines and a fair amount of dirt specks. The 1.78:1 image is not a complete loss, however, as the video comes with a very thin layer of grain while still showing good definition and clarity. (Video Rating: 2.5/5)

Overlooking the occasional specks of dirt and very mild scratches, which thankfully don't happen often, the forgotten horror gem is discovered thanks to an excellent AVC-encoded transfer. The source appears to be in outstanding condition, exposing every nook and cranny inside the ancient monastery. Minor blemishes and imperfections along the stone walls and wooden furniture are plainly visible, and facial complexions are revealing with lifelike textures. The video also comes with well-balanced, comfortably-bright contrast with crisp, clean whites, and black levels are accurate with strong shadow delineation, even during the poorly-lit sequences inside the catacombs. Awash with a stable, thin layer of grain throughout, the 1.78:1 image displays richly saturated primaries and cleanly rendered secondary hues, making for a vivid, sparkling presentation. (Video Rating: 4/5)

Like the video, the audio also suffers from some noticeable anomalies related to the condition and age of the only available elements. Most apparent is the hissing and noise throughout with a few subtle pops here and there. The mid-range is prosaic and uniform, failing to offer much separation and distinction. The screams and loud, thunderous crashes are delivered cleanly, but those same moments are also pretty plain and flat. Low bass is lackluster as well, creating a mostly flat presentation. Imaging, however, is pretty wide and fairly engaging, but vocals tend to feel distant and humdrum with a slight echoing effect during a few conversations. Still, the DTS-HD stereo soundtrack is passable and a decent enough complement to the picture. (Audio Rating: 3/5)

The dusty, damp halls beneath the abbey are haunted by a first-rate DTS-HD MA stereo soundtrack that engages the listener right from the start. The front soundstage feels broad with excellent channel separation and balance, delivering plenty of subtle activity and convincing off-screen effects. Pino Donaggio's fantastic score impresses most, spreading evenly with distinct details in the instrumentation and exceptional fidelity. The lossless mix exhibits room-penetrating clarity without a hint of distortion, making every loud smack and bone-crushing squish as wince-inducing clear as possible. Vocals are precise and well-prioritized, but sadly, the one notable letdown is the lack of bass. (Audio Rating: 3.5/5)

Scream Factory releases another fun double feature with a pair of mostly forgotten direct-to-video gems from the defunct Empire Pictures. The first is Catacombs, a 'Tales from the Crypt' pseudo-homage with a wonderful appearance by Yvonne De Carlo, and the second is 'Catacombs,' a delightful chiller with a religious doom and gloom feel. The first offers the best possible audio and video presentation given its history while the second is a significant improvement over previous editions. Although supplements are sorely lacking, the overall package should make cult collector's relatively happy to add it to their library.

Sale Price 49.99
Buy Now
3rd Party 29.98
In Stock.
See what people are saying about this story or others
See Comments in Forum
Previous Next
Pre-Orders
Tomorrow's latest releases