Having been dismissed by Maternity Hospital, Dr. William Masters (Michael Sheen) needs a place where he and Virginia Johnson (Lizzy Caplan) can resume their work. But thanks to their study's controversial topic – sex – they are forced out of two more hospitals before deciding to open their own clinic. With the seeds of the sexual revolution being sown and the simmering civil rights movement exploding around them, the intimate relationship they started under the guise of their research unravels as the result of Masters' sudden impotence. With the prospect of treating sexual dysfunction becoming increasingly important to their patients and themselves, at home Masters confronts his wife's growing disaffection and the unexpected return of his estranged brother, while Johnson faces a crisis of her own when the publicity surrounding their work places the custody of her two children in doubt.

As 'Mad Men' comes to an end, there's another period drama that should really be getting more play. 'Masters of Sex' might not yet have 'Mad Men's penchant for creating characters that carry over into everyday pop culture, but it does contain a wide variety of period-centric storylines that attempt highlight the stark inequality of 1950s America.

The first season ended with Dr. William Masters (Michael Sheen) and Virginia Johnson (Lizzy Caplan) presenting their scientific findings concerning human sexuality. The study they performed was fraught with controversy as a prudish public found it hard to accept the idea of studying human sex. Masters' ideas were discarded, even by the scientific community, as lurid and without merit. Even through the adversity Masters soldiered on pioneering research that eventually helped us better understand ourselves.

As a serial drama 'Masters of Sex' is quite compelling. The first season was packed with societal and cultural commentary that never felt overly preachy. The show provides room for strong female characters who are forced to fight and claw their way through rampant 50s sexism. This is, perhaps, the most interesting and thought-provoking aspect of it.

Virginia is given the most to do as she struggles to live as an independent woman, but finds herself unable to truly succeed without the assistance of someone like Dr. William Masters. Masters' wife, Libby (Caitlin FitzGerald) likewise is navigating a treacherous road. With a newborn in the home, her trials seem to be focused around winning her husband's approval while simultaneously carving out her own role. Dr. Lillian DePaul (Julianne Nicholson) is desperately fighting to be heard on the issue of women's health and the importance of pap smears. Except her ideas are routinely shot down by the male hierarchy. Margaret Scully (Allison Janney) finds herself mired in a marriage with a closeted gay husband. She's unsure how to remedy the situation, and since she's been so dependent on him for so long she presumably sees no way out. Perhaps the most audacious character on 'Masters of Sex' is Betty (Annaleigh Ashford), a pugnacious personality who balks at the male-dominated world. Her recent past as a sex worker has hardened her. She's used to controlling men, and she shows no willingness to cower when she's told what to do.

Enriching the cultural nucleus of the show even more is the way the second season deals with gender identity and homosexuality. The 1950s were not a kind place for homosexuals. In the first couple episodes we witness Will's close friend Barton Scully (Beau Bridges) go through electroshock therapy in an attempt to "cure" his proclivities toward men. The cultural climate is such that Barton's sexuality is so utterly contemptible that this seems like a logical resolution. It's interesting to see men of science, like Barton, succumbing to societal pressures and undergoing unproven treatments in the hope that there's a cure.

William Masters is a man ahead of his time. That much is certain. He's a progressive thinker when it comes to sexuality, homosexuality, and gender identity. However, at home he's a brute. The dichotomy is extraordinary. At work he's this logical idealist who thinks pragmatically and acts decisively. At home here's a man who delivers babies for a living and has absolutely no idea how to raise one. In one telling scene, when the baby is crying and he's the only one home, William turns up the record player so he doesn't have to listen to the wailing in the other room. Then compare that to the person he is at work. A principled doctor who thinks it's unethical to force a sexually active teenager to have a hysterectomy because her parents order it. A man who thinks it's unconscionable that a dad would ask him, in a fit of anger, to cut fix his newly born hermaphrodite child by “cutting it off.” This war between the Masters the doctor and Masters the husband and father is very intriguing.

Sure the show has a good amount of sex in it, but it never feels tossed in just for titillation's sake. There's a practical use for it. It never seems gratuitous. Instead it feels necessary, as the show explores not only the science behind sex, but also the psychological impact it thrusts upon its participants.

I enjoyed the second season as much as the first. It's a show that understands itself, knows who its characters are, knows what it's trying to say, and knows how to say it. It really could fill that period-piece-drama-sized hole you might have since 'Mad Men' ended.

This is a four-disc Blu-ray set. Each disc is 50GB. Discs 1 – 3 each contain three episodes each, while the fourth disc contains the final two episodes of the season plus special features. They come packed in a nice keepcase with hubs for each disc (two hubs inside the covers, and a swinging arm in the middle that holds two more discs back to back). The case comes with a slipcover that nicely compliments the one that came with the first season. 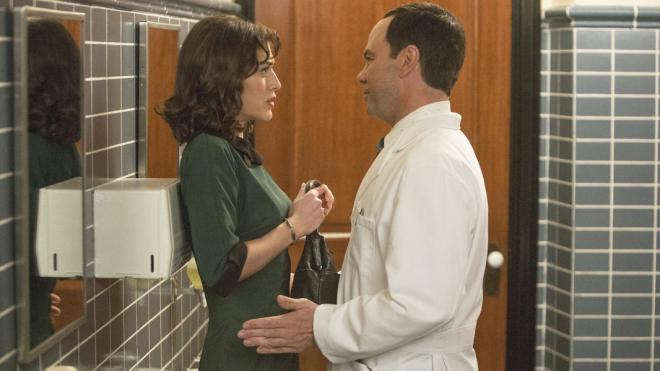 The 1080p presentation is mighty impressive, as was the first season. Another release from Sony that provides a near-picture-perfect presentation. What's great about the near flawless look of 'Masters of Sex' in high definition is that it perfectly highlights the show's intricate 1950s period costume and set design.

Detail is just as wonderful and rich as it's ever been. Clothing textures are nigh tangible. Facial features like age lines, facial hair, and subtle expressions are easily seen. Skin appears natural and never feels overly saturated.

Dark scenes are quite stunning. Shadows are delineated nicely exposing lines and curves in the night without gobbling up detail. Even so the shadows are quite inky and deep. Banding doesn't seem to crop up much, if at all. Aliasing is also non-existent. All in all, we have another great looking presentation from Sony. 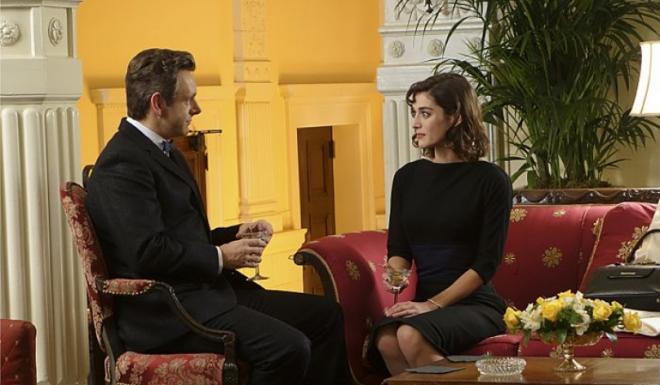 The DTS-HD Master Audio 5.1 mix is a straight-forward no frills type of presentation. That's not to say that it's underwhelming in any way though. 'Masters of Sex,' by its nature, is a talk-heavy drama that focuses its attention on dialogue and the immediate surroundings of its participants. There's not much time where the mix is given a chance to show off what it might be capable of, but that's okay since that isn't what the show's about.

Being the main focus of the show, dialogue needs to be delivered perfectly, which it is. I didn't notice one time where any line seemed to fall out of the mix unnaturally. Everything sounded great and lifelike. Even whispers are easily heard. Directionality of voices are nicely placed in the front and center channels depending on where the voice is coming from.

The rear channels are always tinkling or clinking with some sort of ambient sound. Whether it's a busy hospital or a cocktail party, the rear channels pick up nuanced atmospheric sounds and present them in an enveloping way. So, while it might not draw you in like the latest action movie, it still does its job admirably well, providing a sound mix perfectly tailored for the type of show it is. 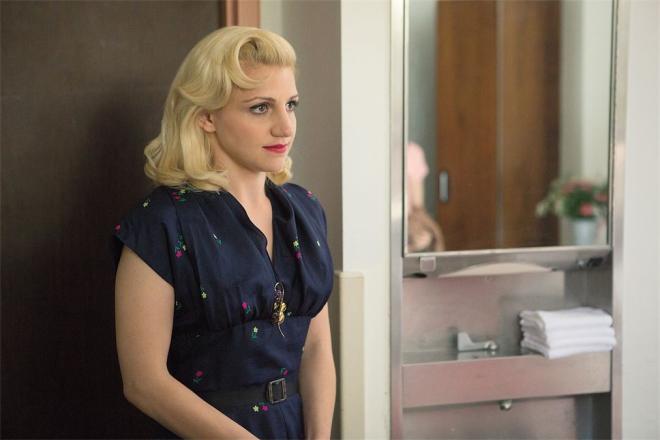 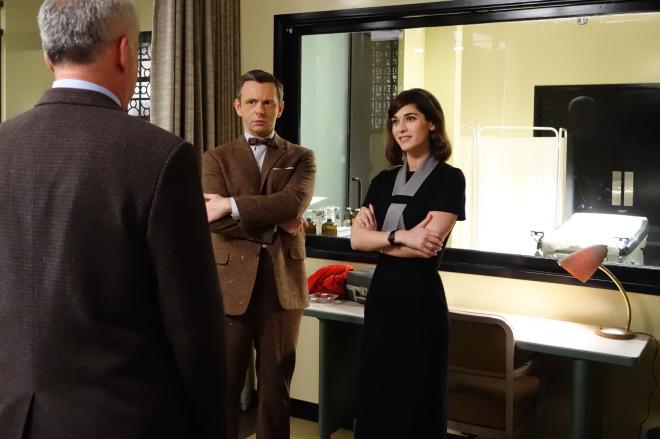 'Masters of Sex' needs to be on premium cable in order to deal with all the necessary issues, but it's hampered in that not enough people know about it. The story is so good and the characters are so well developed that it's not hard to imagine the 'Mad Men' following falling for it. With strong video and audio it's recommended you pick this set up, and if you haven't seen the first season get that one too.

Sale Price 7
Buy Now
3rd Party 5.12
In Stock.
See what people are saying about this story or others
See Comments in Forum
Previous Next
Pre-Orders
Tomorrow's latest releases