In the near future, crime is monitored by an oppressive mechanized police force. But now, the people are fighting back. When one police droid, Chappie, is stolen and given new programming, he becomes the first robot with the ability to think and feel for himself.  As powerful and destructive forces start to see Chappie as a danger to mankind and order, they will stop at nothing to maintain the status quo and ensure that Chappie is the last of his kind.

Much like he did in 'District 9' and 'Elysium,' director Neill Blomkamp asks provocative questions of our modern social order in his latest dystopian sci-fi epic 'Chappie,' but he doesn't quite have the narrative chops for answering those queries or probing any deeper into them. However, as in those aforementioned efforts, the South African filmmaker nonetheless delivers another wildly entertaining portrait of a future where technology becomes more of a burden than a benefit. The invention of armored robots used as a tactical police force is a tool for the advantage of the upper class, preserving the status quo, instead of an advancement for the collective whole. When money and profits are involved, greed and self-preservation trumps altruism, squashing any hope that technology could ever serve the greater good or improve our current doom and gloom situation. It's true of our historical past and sadly, even our present, so why should the future be any different.

Working from a script he penned with fellow cowriter of the apartheid allegory and spouse Terri Tatchell, Blomkamp reinvents the service bots seen in 2013's class warfare parable. Only, in this universe, their designer, a timidly nerdy Deon played to perfection by Dev Patel ('Slumdog Millionaire,' 'The Newsroom'), made his machines to be more benign and obliging, programmed to shoot only when the threat is real. Finally cracking the code for artificial intelligence, the idealistic inventor uploads his program to a seemingly unlucky robot scheduled for the trash heap, going against the strict orders of his boss (an underused Sigourney Weaver). After some difficulty adjusting and learning to communicate, the conversations between it and Deon touch on the metaphysical and theological. The young man almost arrogantly wants "Chappie" (voiced by Sharlto Copley) to recognize him as his creator, making him promise to abstain from temptation, and Chappie realizing he comes with an expiration date questions his purpose. 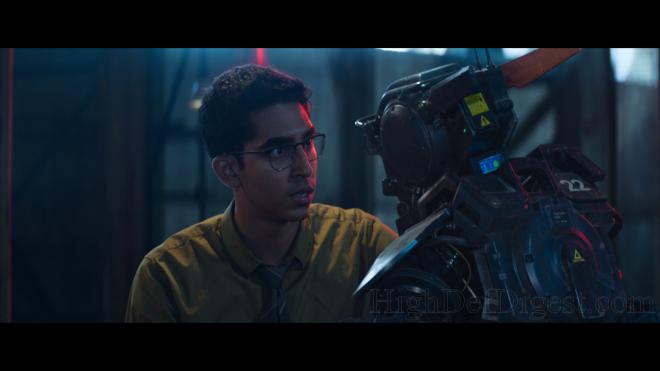 This is all great stuff for audiences to ponder while mesmerized by the stunning photo-realistic visuals thanks to the collaboration of Image House and Weta Workshop, often leaving viewers wondering if the robots might actually be real. Aiding in the plot's casual and rather superficial ruminations on the complexities of intelligence are a trio of hardened criminals serving as Chappie's surrogate family — two of which some astute viewers will recognize as the duo of the electro rap group Die Antwoord while the third is a cliché American thug simply called "Amerika" (Jose Pablo Cantillo). With Ninja doing his best as the tough-love daddy to the child-like robot and Yolandi Visser acting the tender, unconditionally loving mother, this portrayal of the modern domestic household muses on the debate of nature versus nurture. The robot struggling with moral dilemmas and a need to belong bring to mind issues of urban violence being born of economic and social inequality. But the most profound question that goes unanswered, especially for Chappie's wellbeing and peace of mind, is the idea of autonomous consciousness and the soul being one and the same: What's happens to him when his battery dies?

For the most part, Blomkamp seem content to raise these observations without providing answers, which frankly, is the same fault found in previous features. 'Chappie' is more food for thought than a philosophical treatise. And like those two sci-fi actioners, the director packs just enough plot and engaging thrills to make the tale of a sentient robot discovering its place in the modern world into satisfying escapism. Opposition comes from a highly competitive robotics engineer Vincent Moore (Hugh Jackman). Vincent's resentment is what eventually leads to the film's most offhand acts of violence. Again, the filmmakers touch on ideas of industrial espionage and greed at the heart of things, but don't really do much else with it. Instead, it settles and generally prefers popcorn entertainment, which it does successfully.

Sony Pictures Home Entertainment brings 'Chappie' to Blu-ray on Region Free, BD50 disc inside a blue, eco-elite keepcase with a code for an UltraViolet Digital Copy and a glossy cardboard slipcover. After several skippable trailers, viewers are taken to an animated screen with menu options along the bottom, music and full-motion clips.

The impressionable child-like robot learns a lesson in the school of hard knocks on Blu-ray with a stunning, reference-quality 1080p/AVC MPEG-4 encode.

Every scratch, dent, and burn mark poor Chappie suffers throughout the film is distinct and plainly visible. Being able to see each of his physical defects along with every wire and colored cable adds to the extraordinary level of realism, making the little robot that could all the more believable and likeable. All the imperfections of the gang's gray concrete hideout, from the tiniest indent and nick along the solid walls to the bullet holes and gaudy graffiti, makes for an excellent contrast to the sterile, pearly white environment of Chappie's creators. Lifelike textures in the faces of every actor are highly revealing and detailed, exposing the most miniscule blemish, individual pores, and making each of Ninja's tattoos perfectly legible.

Presented in a 2.40:1 aspect ratio, the video also arrives with pitch-perfect contrast, making the smallest little detail in the far distance as clear and distinguishable as anything else in the foreground. Crisp, brilliant whites throughout makes the picture pop in every scene and every tiny piece of debris flying through the air discrete. Primaries are sumptuous and energetically varied while secondary hues are cleanly rendered and full-bodied, adding a great deal of vitality to the story. Shot entirely on the Red Epic camera system, the presentation displays strikingly rich, deep blacks, which is often a shortcoming of filming digitally. But here, brightness levels are terrifically well-balanced with strong shadow details, providing the image with a welcomed, appreciable cinematic quality.

The lesson continues and gains a new artificial life with a spectacular, demo-worthy DTS-HD Master Audio soundtrack that's sure to give anyone's system a serious workout.

Imaging explodes on the scene with an enthralling, gloriously spacious soundstage that feels like a large of wall of sound. Various sounds and noises zip and zoom across the screen with flawless, fluid movement, consistently delivering a variety of convincing effects that's are sure to keep viewers engaged from start to finish. Dynamic range is extraordinarily extensive, reaching room-penetrating highs with crystal-clear clarity while maintaining excellent distinction in the mids like a champ. Vocals remain pristine and intelligible in spite of the loud action and tumultuous mayhem. An awesomely commanding low-end supplies some serious oomph to the chaos, nicely digging deep into the ultra-low depths on several occasions (Bass chart).

While attention in kept in the fronts, the rears envelope the listener with continuous activity. Whether in the bustling traffic of the city, staring at computer screens in the offices of Tetravaal or receiving a lesson on gangsta etiquette inside the factory home of Chappie's surrogate family, the surrounds are endlessly employed, creating a consistently immersive 360° soundfield. Even quiet, more intimate moments are filled with subtle discrete effects while action sequences erupt with debris flying everywhere, music extending into the far back with energy and helicopters smoothly panning from one side of the room to the other. Altogether, this is a fantastic and endlessly gripping lossless mix that audiophiles will love.

As he did in 'District 9' and 'Elysium,' director Neill Blomkamp asks provocative questions of our modern social order in his latest dystopian sci-fi epic 'Chappie,' but he doesn't quite have the narrative chops for answering those queries or probing any deeper. Nevertheless, he manages to deliver satisfying popcorn entertainment while giving audiences some food for thought. The Blu-ray arrives with a reference quality audio and video presentation that's sure to please tremendously. The bonus collection is a fairly light affair but the featurettes are amusing and enlightening nonetheless, making the overall package recommended.