In the year 2159 two classes of people exist: the very wealthy who live on a pristine man-made space station called Elysium, and the rest, who live on an overpopulated, ruined Earth. Secretary Rhodes, a government official, will stop at nothing to enforce anti-immigration laws and preserve the luxurious lifestyle of the citizens of Elysium. That doesn't stop the people of Earth from trying to get in, by any means they can. When unlucky Max is backed into a corner, he agrees to take on a daunting mission that if successful will not only save his life, but could bring equality to these polarized worlds.

I arrived at 'Elysium' not expecting to like the movie very much. Not only had the film gotten mixed reviews from both critics and fans during its theatrical release, but I've never been a big fan of Director Neill Blomkamp's District 9 — a film I found visually interesting to watch, but pretty familiar and predictable in terms of its storytelling. Not coincidently, that's the same kind of thing we get with 'Elysium', although I confess that I enjoyed this movie more.

Blomkamp looks like he's going to be one of those directors who wants a moral message behind all of his films, so while District 9 was a not-so-subtle commentary about apartheid (Blomkamp is a South African native), 'Elysium' tackles the subject of immigration, with plenty of stabs at the '1 percent' versus the other '99 percent' (and the injustices that come with it) along the way. Thankfully, the movie is more about action than it is the characters commenting on how poorly they are being treated, so even though the storyline is rather simple, there's still a lot of fun to be had along the way.

'Elysium' stars Matt Damon as Max La Costa, who we learn via flashbacks has had a rather rough upbringing. He lives in the Los Angeles of the future, which looks like a third-world country in this movie. You see, the people of Earth have pretty much turned the planet into a wasteland while the wealthiest have gone into space and taken up residence on an orbiting space station (the 'Elysium' of the title). Early in the movie, we see a group of people on Earth try to gain access to Elysium, and they're shot down by Elysium's Defense Secretary, Delacourt (Jodie Foster), with help from a 'sleeper' agent she has working for her down on the planet named Kruger (Sharlto Copley).

Max works for an industrial plant on Earth and — thanks to the actions of a rather heartless boss — winds up getting radiation poisoning that he's told will kill him in about five days' time (note: this happens very early in the film, so it's far from a spoiler). Meanwhile, up on Elysium, Delacourt has come under fire for shooting down the people who were trying to reach the station. She hatches a plan with the CEO of the company Max works for, John Carlyle (played by William Fichtner), to come up with a computer program that can override the one currently running Elysium and establish her as the new President of the space station.

Max, knowing he has little time left, and knowing that Elysium has machines that can cure any known sickness in the human body, wants to get to Elysium himself. His ticket there is through teaming up with a group that wants to steal financial info from Carlyle, and to do so they 'retrofit' Max's body with a number of enhancements, including robotic attachments to his arms and a computer panel that is screwed into the back of his head. This gives Max the ability to upload Carlyle's computer info straight into his own brain, but once he does so (following a nifty fight sequence), he realizes he has a program that can make everyone on Earth a citizen of Elysium — giving him a whole new reason to want to make it to the station. Delacourt discovers this and assigns Kruger to stop him.

While the premise here is rather simple and straightforward, and the movie is well-paced, 'Elysium' is not without its problems. The most glaring of which is Jodie Foster's character, who probably could have been removed completely from the storyline with no ill effect. Sidestepping the odd accent she uses  (which seems to be a mixture of South African, British, and possibly the one she used for 'Nell'), I'm not sure Delacourt serves any real purpose in the unfolding plot, and Foster is pretty much given a thankless role. There's also a love interest for Max, who is a woman (played by Alice Braga) he's known since childhood. Again, other than serving as someone who can be put in harm's way, the character really doesn't have much to do or an impact on the resolution to the story.

I also had some issues with the question of whether a simple computer program could actually change people's lives. Without giving away the conclusion of the movie, we're meant to accept the fact that if Max gets the information in his brain uploaded to the computer system of Elysium, everyone on Earth will now be treated equally. The film doesn't bother to address that a simple computer program isn't going to change the hearts and minds of the '1 percent' on Elysium, nor the feelings that the people of Earth have against them. Sadly, the story here just isn't complex enough to ponder those kinds of questions.

Where 'Elysium' does succeed though is through its action sequences, which are well-designed (far too many films have action that's hard to follow these days…that's not an issue here), well-paced, and feature some fantastic visuals. Blomkamp's biggest achievement here is creating a futuristic world that seems plausible, and viewers could just spend a viewing of the movie taking in all the nice little details he's added to the movie that make his world look very realistic and 'lived in'. 'Elysium' is one of those rare titles where I didn't particularly care for the simplicity of the story, but still wound up enjoying the movie for what it was. If Blomkamp ever comes across a really good script (he's written or co-written all his films up until now), I'd love to see what he could do with it.

'Elysium' lands on Blu-ray in a standard Sony keepcase that houses the DVD on the inside left, the Blu-ray on the inside right, along with two inserts: one for a UltraViolet digital copy of the movie, and the other for $2.00 off the purchase of a Headblade ATX – so you can shave your head just like Matt Damon (yeah, like that's going to happen)! A slipcover matching the artwork of the keepcase's slick slides overtop.

Both the Blu-ray and DVD are front-loaded with trailers for Oldboy, The Monuments Men, and Captain Phillips. Likewise, both the Blu-ray and DVD main menu consists of a still of the back of Matt Damon's character's head and shoulders (and all the attached gadgets from the movie), with menu selections running across the bottom of the screen.

This review was delayed by the fact that we were never sent a screener. There were a number of retailer exclusives when 'Elysium' was first released on home video, although one's mileage may vary on finding those versions at this point. Target was offering a steelbook of the movie, while Best Buy was selling a version with an exclusive bonus disc inside. Walmart, meanwhile, wasn't offering any exclusives, but they were selling a two-pack that included Neill Blomkamp's previous release, District 9. 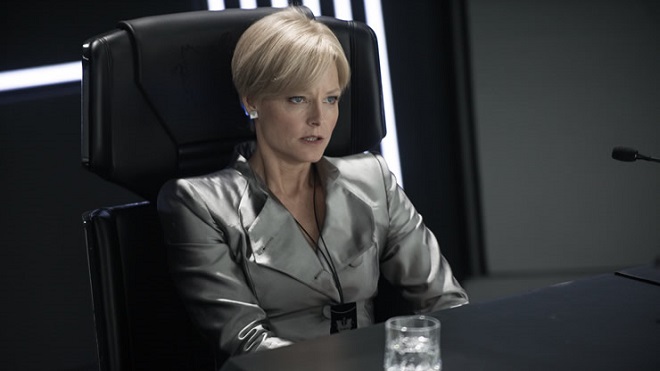 'Elysium' was shot digitally, and the movie was mastered in 4k for its home video release, so the results here are pretty stunning. The image has great detail to it and a lot of the 'pop' that one likes to see on a Blu-ray transfer. Black levels are inky deep and blacks never suffer from crush. Skin tones and overall contrast is well-balanced throughout. Considering the vast difference between the look of Earth in this movie and the look of the Elysium space station, I was worried the bright whites of the latter would look blown-out, but that's never a problem here. There are absolutely zero issues in regard to aliasing, compression artifacts, banding, or the like. In short, this is a reference quality transfer.

The primary track on this title is an English 7.1 DTS-HD Master Audio track that will give your system a real workout. The track provides some fantastic directionality, some great use of the low-end frequency, and the kind of immersiveness that really adds to one's enjoyment of the movie. Everything is well-balanced too, so the various sound effects and explosions never drown out the spoken word. This is the kind of track you'll want to use when showing off the capabilities of your speaker system to your friends and neighbors. Like the video quality, the audio here is reference-quality. 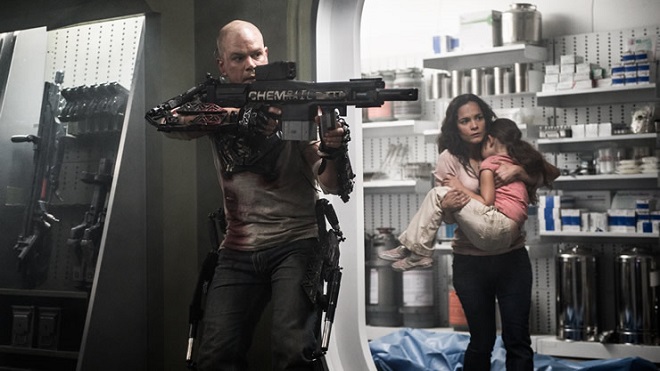 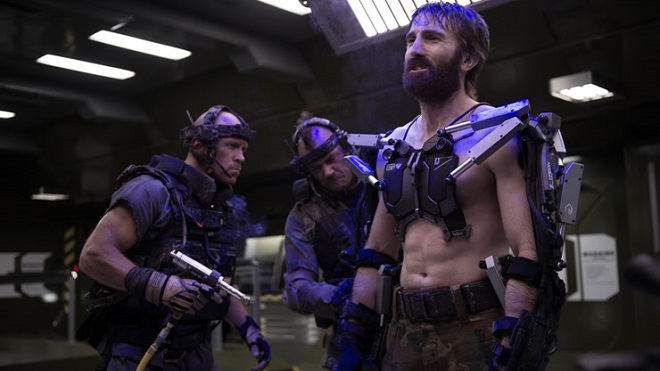 Although it's far from a great movie, and perhaps a bit too simplistic in its storytelling ambitions (although certainly not in its visuals), 'Elysium' is an enjoyable enough film that wasn't quite as deserving of some of the negative reaction it got from both critics and moviegoers alike. I actually enjoyed this one as a piece of entertainment more than District 9, which I realize puts me in a pretty big minority. However, as far as I'm concerned, 'Elysium' has enough going for it visually and action-wise to make it worthy of one's time. With 5-star video and audio, this Blu-ray is a knockout. Recommended.

Sale Price 5
List Price 9.99
Buy Now
3rd Party 2.54
In Stock.
See what people are saying about this story or others
See Comments in Forum
Previous Next
Pre-Orders
Tomorrow's latest releases