Terry Noonan returns home to New York's Hells Kitchen after a ten year absence. He soon hooks up with childhood pal Jackie who is involved in the Irish mob run by his brother Frankie. Terry also rekindles an old flame with Jackie's sister Kathleen. Soon, however, Terry is torn between his loyalty to his friends and his loyalties to others.

For anyone not named Martin Scorsese, September of 1990 was a tough time to open a Mob movie. Scorsese's 'Goodfellas' was hailed as a masterpiece of the gangster genre and would go on to be nominated for several major Oscars. While that movie's acclaim and success were great news for the Warner Bros. studio, they were very bad news for struggling Orion Pictures, which had just released the similarly-themed 'State of Grace' a week earlier. The smaller picture was completely overshadowed and ignored, and became another in a distressing line of box office flops for a studio that wouldn't survive on its own much longer.

Beyond a shared focus on street-level hoods (as opposed to the Mafioso power players of the 'Godfather' franchise, which would also return to cinema screens a few months later), the two movies don't have much in common, so I won't belabor the comparison beyond noting the effect that one had on crushing interest for the other. 'State of Grace' is a much smaller, more intimate film of modest ambitions. It's a character piece rather than an epic.

Sean Penn stars as Terry Noonan, a young Irish ne'er-do-well forced to flee the Bronx when a drug deal goes sour. He returns, after an absence of 12 years, to his old stomping grounds in the notorious Hell's Kitchen neighborhood of New York, where he promptly reconnects with his former best friend Jackie Flannery (Gary Oldman, playing perhaps the sleaziest of his many sleazebag roles) and falls back into old habits. One of those habits might include his ex-girlfriend Kathleen (Robin Wright), who happens to be Jackie's sister.

Looking to get back in the action, Terry starts running with Jackie's crew and doing jobs (acting as muscle, torching buildings, etc.) for Jackie's brother Frankie (Ed Harris), a mid-tier boss in the Irish Mob. Frankie runs the show because he's very dispassionate and calculating in everything he does. He's currently working to forge an alliance with the Italian Mafia that, if successful, could catapult him to the big leagues of organized crime. Consequently, he worries about relying too much on the irrational, unstable Jackie. However, he sees something promising in Terry, who seems to be a lot more intelligent than the other fuck-ups and losers that Jackie calls his friends. The relationships between all of these characters will be tested by the secrets each holds, the revelations of which lead to some plot twists that of course threaten Frankie's deal with the Italians. 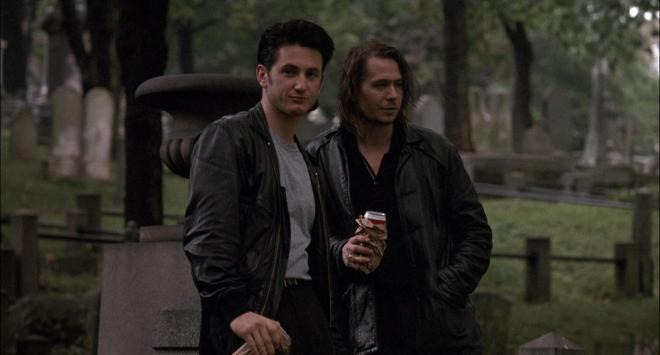 The film has a great cast. In addition to those already mentioned, John Turturro and John C. Reilly have small but important roles. Individually, all of the performances are very strong. Sean Penn, who'd just turned 30-years-old at the time, still has a bit of a fresh, pretty-boy look to him, but smolders with intensity and sells his character's angst at the prospect of betraying his friends. Obviously, he also has quite a bit of chemistry with Robin Wright, whom he'd later marry in real life. (They eventually divorced, but after a solid 14 years.) A last-minute replacement for another actor, Ed Harris makes an intimidating heavy. Gary Oldman has a lot of fun letting loose as a character with no emotional restraint.

That said, it stands out as odd that Wright is the only of the leads who attempts an Irish accent. Not that she's bad at it, but she probably shouldn't have bothered if the others weren't going to. Between the mismatched accents and wildly different temperaments, the trio of Kathleen, Jackie and Frankie aren't convincing at all as siblings. I have a hard time buying that they're supposed to be related to one another.

Although it was favorably reviewed by most critics, perhaps one of the reasons 'State of Grace' failed to draw much attention is that it lacked an auteur with the reputation or clout of a Martin Scorsese behind the camera. Director Phil Joanou (a year younger than Penn) was mostly known for making U2 music videos as well as the poorly-received 'Rattle and Hum' concert documentary that, if anything, started a backlash against the band. At the time, a number of music video directors attempted to transition to features with mixed results, and coming up through MTV was seen as a stigma within the community of real filmmakers.

Despite that baggage, Joanou's direction is stylish and atmospheric, and creates a real sense of place in the seedy neighborhoods. Unlike many of his music video contemporaries, he pays as much attention to the storytelling here as the slick visuals. The script by playwright Dennis McIntyre (who passed away before the film was released) has richly drawn characters, an interesting plot, and some legitimate thematic weight. (You can't make a movie about Irish mobsters without a heavy dose of Catholic guilt – hence the title.) Joanou also ends the film with an amazingly suspenseful and well-staged slo-mo shootout. That scene alone garnered the movie a small cult following when it hit home video and cable syndication. Even if it's largely still obscure, 'State of Grace' has a lot to recommend and begs for rediscovery.

'State of Grace' arrives on Blu-ray courtesy of Twilight Time, under license from MGM Home Entertainment. The disc is a limited edition with a pressing run of only 3,000 copies. Like most Twilight Time releases, the Blu-ray has a simple static menu. A booklet inside the keepcase contains an essay by Twilight Time employee Julie Kirgo.

'State of Grace' was photographed by Jordan Cronenweth, the cinematographer most famous for shooting Ridley Scott's 'Blade Runner'. As in that film, Cronenweth favors richly contrasty imagery. He does some really lovely things with the sculpting of light and shadow to make the movie look slicker and more expensive than it might have in other hands.

The Blu-ray's 1080p/AVC MPEG-4 transfer looks very good overall. The opening credits are extremely grainy and ugly by design (they consist of footage from later in the movie that's been slowed down and blown up to magnify small portions of the frame), but the 1.85:1 picture clears up right afterwards. The image has strong colors and contrast, and a respectable amount of detail without any noticeable Digital Noise Reduction or other unwanted processing.

However, dark scenes, especially night scenes, can be quite grainy. The film elements used for the transfer also exhibit recurring dirt and speckles throughout the movie. These issues are relatively minor and not enough to detract from the experience, but they are noticeable. 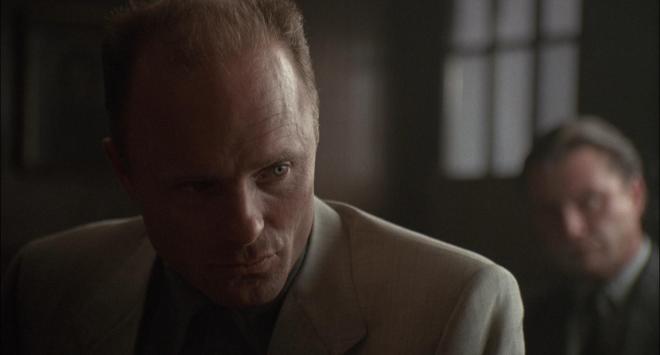 I wish I had more complimentary things to say about the Blu-ray's sound quality, but the DTS-HD Master Audio 5.1 soundtrack doesn't take well to being played back at loud volumes. Dialogue is scratchy and the track has a harsh character. I can't say how much of that is due to the original sound mixing versus how much is a home video issue, but whatever the reason, it sounds weak.

Back in 1990, the film played in theaters in Dolby Surround format. That was reconfigured to 5.1 for DVD and now Blu-ray. Any remixing is subtle and doesn't call attention to itself. Surround usage is moderate but effective. Bass is likewise present but not particularly notable.

The movie has several gunfights. One in the middle sounds really great, with gunshots that hit with satisfying impact. Unfortunately, similar scenes earlier and later aren't nearly as impressive. The big shootout climax is disappointingly flat.

The saving grace here is the musical score by the legendary Ennio Morricone, which comes across very well for the most part. MGM last released 'State of Grace' on DVD back in 2002. No doubt owing to the film's reputation as a box office flop, that disc was a very basic affair with only a single bonus feature, which has been carried over to Blu-ray. Impressively, Twilight Time offers a small but welcome upgrade over the DVD with the following exclusive features: 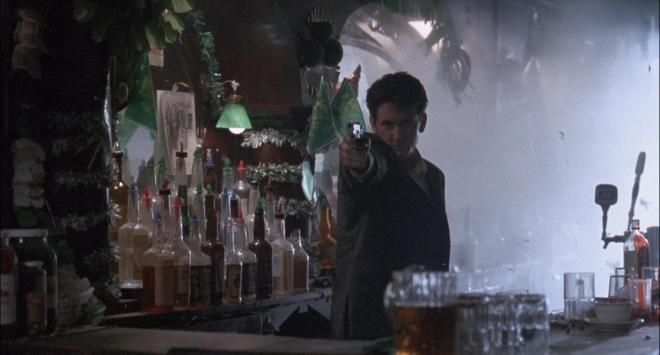 As mentioned, 'State of Grace' was a box office dud that disappeared from theaters in a blink. The following spring, however, Orion Pictures got the last laugh over Warner Bros. when the studio's 'Dances with Wolves' beat out 'Goodfellas' at the Oscars in nearly every category where the two films competed against each other. (It also grossed about four times as much money.) Sadly, even the back-to-back victories for that movie and 'The Silence of the Lambs' couldn't save Orion from bankruptcy just a few years later.

Although overlooked at the time of its release, 'State of Grace' was a compelling crime thriller that showed great promise for its young director. Unfortunately, Phil Joanou's later features such as 'Final Analysis' and 'Heaven's Prisoners' were weaker efforts marred by studio interference and wound up as further box office failures. Nevertheless, 'State of Grace' holds up nicely 25 years later due to its strong characterization and a very memorable, action-packed climax.

The limited edition Blu-ray from Twilight Time should hopefully bring some well-deserved attention to the film. The disc has a nice video transfer (albeit less impressive audio) and a new audio commentary. Fans of the movie should find it quite satisfying.