U2: Rattle and Hum

Okay, before a bunch of irate U2 fans send me a barrage of hate mail, let me just say that I am a fan of the band. I own many of their records, and feel that a few of their songs are even the best that modern music has ever heard (really, is 'One' not the greatest rock ballad of all time?). But even the biggest of bands sometime teeter a little too close to the edge of implosion, and U2's ill-fated 1989 big-screen extravaganza 'Rattle and Hum' may just be the most disappointing release in the band's entire 25-plus year career. Quite frankly, this movie sucks hard.

Of course, that opinion is purely subjective, though most reviews at the time of 'Rattle and Hum's release were also far from kind, even by the band's biggest critical supporters. And I am also biased in that I'm far more partial to U2's earlier, pre-"Joshua Tree" albums, as well as its '90s period of experimentation (including "Achtung Baby" and my favorite of their albums, the unfairly maligned "Pop"), than the multiple-Grammy-winner that led to 'Rattle and Hum.' But I'm sure the idea of documenting the band post-"Joshua Tree," when they were at the height of their U2-ness and with all the world their oyster, seemed like a good idea on paper. Unfortunately, not only had the magnitude of the group's critical and commercial success grown exponentially in the wake of the "Joshua Tree" hysteria, but so had their egos. And watching Bono's already over-inflated noggin blown-up to big-screen proportions was just too much for even this forgiving U2 fan to take.

Alas, 17-odd years later my opinion of 'Rattle and Hum' has changed little. I think the band and director Phil Joanou made a couple of key miscalculations that, while well-intentioned, render the film dramatically inert. The main problem is that there appeared to be little consensus on what 'Rattle and Hum' was supposed to be about. The band is frequently seen laughing during Joanou's attempts to interview them, snickering that the film is going to be a "musical journey" before a quick cut to the next song. None of the members, not even Bono, seem at ease in front of the camera when they are not performing, which makes most of the interview segments aloof and uncomfortable. Unfortunately, Joanou never refocuses the film away from the band's insolence -- even though the movie's PR blitz positioned the movie as a document of U2's embracing of "American roots music," we get little insight into that, either. Just endless montages of the band hanging out with B.B. King or singing with a church choir -- which is about as revealing as your average MTV music video.

The film's other liability rests squarely on the shoulders of Joanou. One can see why he might want to visually portray U2 as the messiahs of rock music at the time -- indeed, the were the biggest band in the world in 1988. But he stages all of the musical numbers not as if he's photographing a rock band but the second coming of Christ. It's pompous, self-congratulatory and does nothing to balance the band and especially Bono's relentless egotism with any humor (as the band would so successfully do on their own during the arch, ironic '90s Zoo TV and Popmart periods). Joanou's big crane shots and constant backlighting of the band members against giant spotlights starts to feel like so much empty posturing, especially when what has come before during the behind-the-scenes bits was so uninspired. And Joanou's approach doesn't even accurately represent the feeling of a U2 concert, which relies so much on interaction between band and audience. The crowd is all lost here in a blur of abstraction -- it's just Bono and The Edge standing on the mountaintop, singing to the grateful masses below in arty black and white.

So, what about the music? Even here 'Rattle and Hum' disappoints. While it was fine for the band to experiment with new musical avenues, in this case American gospel, R&B and the blues, the lack of humor again leaves most of the new songs less memorable than their best work. Aside from such singles as 'Desire' and the underrated show-closer 'All I Want is You,' few outside of diehard U2 fans can probably name most of the rest of the songs off the album. Not that any of 'Rattle and Hum' is really bad music, but how curious that the period U2 would choose to document on film was neither their most memorable as a concert spectacle nor as a studio album. As much as I really wanted to love 'Rattle and Hum,' it is probably the period of the band's career I'd least like to remember. 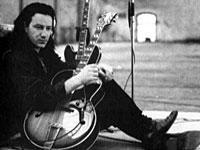 'U2: Rattle and Hum' is among Paramount's first wave of Blu-ray titles (a list that includes such hits as 'Four Brothers,' 'The Italian Job' and 'Aeon Flux,' amongst others), which the studio is releasing over a staggered period of three weeks. 'Rattle and Hum' is probably not the most eagerly awaited of Paramount's initial Blu-ray offerings, but I wanted to review it first because, as I noted in my review of the HD DVD version, it was one of the worst-looking discs I'd yet seen on that format. So how would the Blu-ray version stack up? Especially as, according to the confirmation we got from the studio, all of their first Blu-ray titles have been encoded in MPEG-2. Given that the HD DVD version of 'Rattle and Hum' is AVC/MPEG-4, I figured that if nothing else this would make for a very interesting comparison.

I am not sure what my expectations were, but I actually think 'Rattle and Hum' looks narrowly better on Blu-ray. But first I'll get my complaints out of the way that apply to both formats. 'Rattle and Hum' is a severely grainy, messy film, and the source material suffers unnecessarily from age and neglect. Dirt is frequent, as are blemishes, and even the vivid lighting of the color portions of the film look fuzzy and smeared. Add to that some pixelization, edge enhancement and inconsistent contrast and sharpness, and you have an image that hardly impresses, regardless of format.

Detail is also predictably wanting on both the Blu-ray and the HD DVD, with only a few of the better black and white concert sequences boasting any true sense of depth. For example, "Bad" looked quite good, with rich, deep blacks and a nearly three-dimensional appearance. Sure, there is still some obvious grain, but overall the transfer has a gritty if pleasing feel. Then, oddly, the big color concert sequences that make up most of the second half of the film look rather dismal (aside from "With or Without You," which is a bit better than the rest). Shadow delineation is weak, colors unstable and overall the picture just looks more like a middling DVD release than great high-def.

However, doing a direct comparison of three scenes -- the early number "Exit," the band's visit to Graceland, and finally "With or Without You," which again was shot in color -- I found the Blu-ray to be somewhat cleaner at times. Certainly, this is still a very grainy film. But for example, during "With or Without You," solid areas of color appear just a bit more noisy on the HD DVD. On the other hand, "Exit" was comparable on both formats. What could account for this? As has been widely lamented for weeks now, the Samsung BD-P1000 Blu-ray player (which is still our "reference player," at least until the PlayStation 3 shows up) suffers from a "faulty noise reduction chip," so it is highly likely it contributes to the slightly smoother appearance here. I'd like to be able to praise this Blu-ray version, or some sort of remastering effort on behalf of Paramount, but that's hardly likely. (The source print is still crap.) And again, the differences here are so minor as to almost be negligible. But it's interesting to note nonetheless. 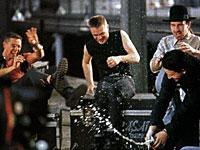 Unlike the video, there is little to fault with 'U2: Rattle and Hum' in the audio department. All of the film's gargantuan concert sequences sound pretty fantastic, with the kind of attention to fine detail that marks the best live music recordings. Note also that though Paramount has included a Dolby Digital 5.1 surround track here (without the "Plus" designator as on the HD DVD), it is encoded at the same 640kbps, as the Blu-ray format does not require the "Plus" on mixes recorded in six channels or less.

Anyway, 'Rattle and Hum' sounds great. Dynamic range is excellent. U2 have always been a great live band (as they should be after years of incessant touring), and the power and force in which the instrumentation and Bono's vocal delivery comes through on this disc is pretty kick-ass. This is first-rate stuff, with a sense of great presence and realism across the entire frequency range. Low bass also really chugs -- the percolating rhythms of 'Exit,' 'Pride' and 'Where the Streets Have No Name' handedly outshine their original recorded versions. I also was happily pleased at how well balanced Bono's vocals are in the mix -- too often on live recordings these days the singer's voice is place solo in the front center channel, which often sounds artificial and unreal.. Not here -- this mix sounds like one cohesive, organic wall of sound emanating from the front three channels, as if you are really right there in front of the stage.

Unfortunately, I was disappointed by the lack of surround engagement. There is little that emanates from the rear speakers -- by the time of the movie's triumphant close, "Pride (In the Name of Love)," I really wanted to hear that crowd sing-along roaring from my rear speakers. Instead, all I got was a minor bit of bleeding. Compare this soundtrack to 'The Last Waltz,' which even for a 1978 recording was nicely remixed with specific instruments isolated across all five channels. While the lack of surround activity during 'Rattle and Hum's interview and behind-the-scenes segments is not problematic, for the powerful concert numbers it is sorely missed.

Seeing as no prior video release of 'Rattle and Hum' included any extras, including the recent HD DVD, I guess it is no surprise this Blu-ray version would get nothing new. Just a theatrical teaser trailer that's really just a song excerpt. And that's too bad, because given the poor initial reaction to the film and its continued middling reputation today even amongst the band's fans, a commentary track by the group or director Phil Joanou could have been quite revealing. Guess even U2 have skeletons they'd rather not clean out of their closet.

Yes, I am a U2 fan, but no, I just cannot warm to 'Rattle and Hum.' Despite a few blistering concert sequences, the film lacks narrative drive and ultimately amounts to much sound and fury, signifying nothing. This Blu-ray release is really no better than the previous, largely lacking HD DVD version, and any reduction in apparent video noise is likely a result of current hardware, not better software. At least the film's soundtrack is quite satisfying, so if you turn your picture off and just listen to the sound, you can probably imagine a better transfer in your head anyway.

Sale Price 45.19
Buy Now
3rd Party 133.2
In Stock.
See what people are saying about this story or others
See Comments in Forum
Previous Next
Pre-Orders
Tomorrow's latest releases