Harley Davidson and the Marlboro Man

"Hotly staged bike chases" (Variety), state-of-the-art weaponry and "excellent explosions" (Hollywood Drama-Logue) form a deadly combination in this "lively" (Los Angeles Times) action film about a couple of modern-day, motorcycle-ridin' Robin Hoods. Starring Mickey Rourke (Get Carter), Don Johnson (Tin Cup) and Vanessa L. Williams (Shaft), Harley Davidson and the Marlboro Man contains thrills and excitement that never let upwith surprise twists at every turn! In the lawless world of the future, drifters Harley Davidson (Rourke) and The Marlboro Man (Johnson) help an old friend save his bar by robbing the very bank trying to takeover his property. But this is no ordinary bank and the armored car they roll is filled not with moneybut drugs! Now Harley and Marlboro become the objects of a ruthless manhunt by the corrupt bank chief's deadly and unstoppable henchmen.

Right from the opening moments of 'Harley Davidson and the Marlboro Man,' the pungent musk of manliness saturates the screen. Audiences can practically smell the sweaty stink of ruggedness and machismo as David Eggby ('Mad Max,' 'Pitch Black') photographs a ripped and shirtless Mickey Rourke in thick orangey browns mixed with heavy dark shadows. Director Simon Wincer ('Quigley Down Under,' 'Free Willy') reveals the actor standing by a motel window staring pensively into the distance and holding the picture of a happy couple. Still immersed in gloomy shadows and after dressing in his soon to be signature leather outfit, we see the silhouette of Rourke walk out the door without a word while a naked woman in the bed awakens, and Jon Bon Jovi's "Wanted Dead Or Alive" plays to give the movie's bold sense of manhood one final nudge. Watching the sequence again, the tone is somewhat comical, but more importantly, there is something celebratory about it as well.

Also, the style and camerawork of the opening hints — dare I say, even stinks — of homage to the noir style, but those sentiments soon dissipate when the movie switches to an oddly overt 80s romanticism. Then again, the combination of dark minimalism with the decade of gaudy excess would make sense in a production blatantly intent on reveling, nearly eulogizing masculinity. Although made very soon after the decade just ended, the movie is essentially 98 minutes of "boys and their toys" causing fights for no other reason than the love of seeing fists fly. Meanwhile, the only female characters seen throughout are relegated to the T&A sidelines — only there for show, literally viewed as objects of desire. In fact, Vanessa Williams and Tia Carrera are actually the only two women worth remembering, yet they still only function as the exotic other making virile men do and say stupid things. Strangely, the display and fiasco doesn't seem misogynist as much as simply exploiting and satisfying a desire to be a guy's movie of old, a simple story with lots of action. 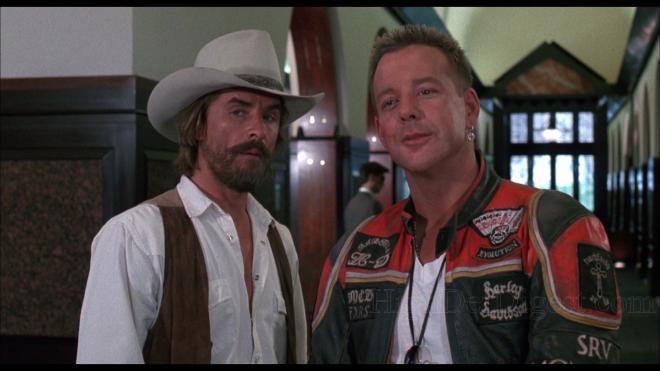 Indeed, the script by Don Michael Paul (future director of franchise sequels 'Lake Placid: The Final Chapter,' 'Jarhead 2' and the upcoming 'Tremors 5: Bloodline') makes intentions known on a literal level when Don Johnson comments that he and Rourke are a dying breed. His meaning is what, in my eyes, makes the film a surprisingly intriguing watch because he's alluding to a larger cultural change that was taking place at the time. The box-office flop that today enjoys status as a cult favorite presages the rising tide of the political-correctness movement, where the testosterone-fueled masculine archetype was fading away and the man in touch with his inner feelings was becoming the norm. There isn't any implication that this is a bad thing — even our two would-be reluctant heroes in this actioner are shown to possess a gushy soft side beneath their hardened exteriors. Only, times are changing, and it's acceptable for men to be emotionally vulnerable. However, Wincer's movie, set in the then-future of 1996, mixes this sentimentality with a celebration of the over-the-top action flick.

Part of this silly revelry is in featuring two protagonists who are actually nameless stereotypes, ostensibly and affectionately referred to after individual character quirks and traits. But more importantly, they epitomize the very über-machismo expected to disappear in the future or probably viewed as caricatures of an antiquated era. Johnson's Marlboro smoker typifies the rough-riding, John Wayne type of cowboy while Rourke's tough biker embodies the outlaw loner whose home is the road. The film's villain, with a name like Chance Wilder (Tom Sizemore) and his all in black hired gun (Daniel Baldwin), is even the model of 80s money-loving corporate yuppie determined to conglomerate everything into a business model and squash the spirit of individualism incarnated by our heroes. Therefore, the only way to battle the ever-growing wave of sameness is in rediscovering that masculine archetype. This doesn't by any means make 'Harley Davidson and the Marlboro Man' a great piece of cinema, but it's what makes it fun action entertainment and the reason for its cult following.

Shout! Factory brings 'Harley Davidson and the Marlboro Man' to Blu-ray on a Region A locked, BD25 disc housed inside the normal blue case. After a promotional piece for Shout Factor TV, the disc goes to a menu screen with full-motion clips and music playing in the background.

Harley and Marlboro ride into Blu town with a pretty yet rough around the edges appearance, and the two über-macho heroes have never looked better. The source used for this 1080p/AVC MPEG-4 encode appears to be in excellent condition, exposing every worn crease in Mickey Rourke's leather-clad outfit and individual threading and stitching in Don Johnson's rugged denim getup. Facial complexions appear healthy with visible pores, wrinkles and negligible blemishes, and fine lines around various objects are sharply distinct. A few sequences are a tad softer than others, but they don't distract and easily forgiven as the result of the cinematography. Aside from a couple mild hot spots, contrast is well balanced and stable with clean, crisp whites, and blacks are true and accurate with strong shadow delineation. Colors are bold and cleanly rendered with primaries looking particularly bright and vivid. Presented in its original 1.85:1 aspect ratio, the presentation looks great on Blu-ray.

Like the video, the rough-riding manly pair speed off into the sunset with a highly-enjoyable DTS-HD Master Audio soundtrack that cult fans will surely love. Dialogue is clear and distinct in the center, allowing for every emotive line to be perfectly heard. Imaging is broad and welcoming with lots of wonderful detailing and clarity in the mid-range. Channel separation is nicely balanced with off-screen effects that are discrete and convincing, keeping the listener engaged from beginning to end. The real surprise is a throaty, punchy low-end that gives every action sequence some weight and provides the song selections with a sharp kick and depth. Overall, it's a great lossless mix for a cult favorite.

'Harley Davidson and the Marlboro Man' is amusingly fun actioner starring Mickey Rourke and Don Johnson. The Blu-ray arrives with an excellent audio and video presentation that'll surely make fans very happy. Sadly, a puny set of bonus features makes the overall package a tough call, but while cult enthusiasts will gladly pick this up, others might want to give a rent before deciding to purchase.

Sale Price 14.99
List Price 24.97
Buy Now
3rd Party 14.99
In Stock.
See what people are saying about this story or others
See Comments in Forum
Previous Next
Pre-Orders
Tomorrow's latest releases